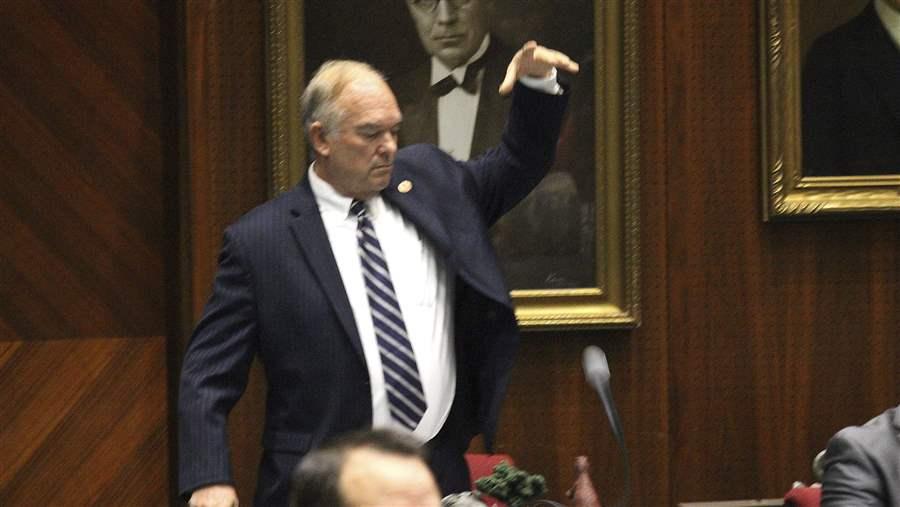 Arizona state Rep. Don Shooter, a Republican, drops his mic after voting no on a resolution that expelled him from the Legislature after he was accused of sexual harassment. Some states are considering proposals that would bar the use of taxpayer money to pay for sexual harassment settlements involving lawmakers.

When Pennsylvania state Rep. Thomas Caltagirone was accused of harassing a staff member, the Legislature settled the matter outside of court. The state’s insurance paid out $250,000 in 2015, and no one said a word — even during the next year’s elections, when Caltagirone retained his seat.

This secret settlement is one of many involving state lawmakers or legislative aides that have been exposed in the last few months, as a wave of sexual misconduct allegations has flooded the country. And in state after state, the allegations of wrongdoing quietly went away after victims received payouts from public funds.

The revelation that legislatures frequently use taxpayer money to protect lawmakers and staff accused of harassment or assault has sparked outrage and prompted reporters to try to tally up the bill.

And the Wisconsin State Journal in December revealed that the state Legislature in 2015 spent $75,000 to settle a claim against a state senator who was accused by a former aide of talking about her breasts and making other sexual comments. The accused — Democrat Spencer Coggs — is now treasurer for the city of Milwaukee.

Lawmakers in at least five states — California, Illinois, Iowa, New York and Pennsylvania — have proposed banning the use of public dollars for settlements or payouts related to sexual harassment allegations against state lawmakers.

Advocates for taxpayers, such as Pete Sepp, president of the nonprofit National Taxpayers Union, say lawmakers need to be held responsible for their actions.

“They are supposed to be answerable to the people who pay the bills,” Sepp said, “and those people are saying right now that this situation is untenable.”

But some employment lawyers, such as David Yamada, a law professor and director of the New Workplace Institute at Suffolk University in Boston, say the issue is more complicated than it seems.

Holding individual lawmakers, and not the government, responsible for sexual harassment may lessen the incentive for legislatures to offer sexual harassment training and to police their own, Yamada said. And, because some lawmakers may not be able to come up with the money for a settlement, it also may make it less likely that the victim will receive compensation for her claim.

“There are better ways to spend public money than to have to spend it to atone for the misdeeds of public servants,” Yamada said. But, he said, “We have to hold public employers liable.”

Legislatures are often on the hook for the bad behavior of lawmakers because, like other employers, they are responsible under the Civil Rights Act for creating a workplace that is free from harassment and discrimination. Employers that don’t attempt to prevent harassment — and report and investigate claims when they arise — can be held liable.

It’s part of an employer’s job to prevent a toxic culture, said Emily Martin, general counsel at the National Women’s Law Center, a nonprofit that provides legal defense for victims of harassment. But Martin said the bills raise an important question about why the state is paying for the transgressions of lawmakers, who do not have a traditional employer-employee relationship.

Lawmakers don’t really have managers, other than the public, she said. “In order to really hold that legislator accountable, maybe it makes sense to have them pay for it.”

The effort to hunt down secret settlements involving state lawmakers began in November after reporters revealed recent cases in which taxpayer money was used to settle sexual harassment claims against members of Congress, including payouts related to accusations against Democratic Reps. Alcee Hastings of Florida ($220,000) and John Conyers of Michigan ($27,000), and against Republican Rep. Blake Farenthold of Texas ($84,000). Congress is considering a bipartisan bill, like the state bills, that would bar the use of taxpayer money to settle harassment claims.

It’s hard for the public to find out about settlements agreed to by state legislatures, and even when the payments are made public, the details of the allegations usually are not. In some states, legislatures aren’t subject to public records laws, and in other states, officials say the law doesn’t apply to these records. It’s also hard to know what records to ask for — sometimes the settlements are paid by state insurance, sometimes by the legislatures’ administrative offices, and sometimes by individual party caucuses.

In Pennsylvania, the payout for the claim against Caltagirone, a Democrat, came from a state insurance fund. Caltagirone has consistently denied any allegations against him. He said he is prohibited from talking about the settlement, but that it did not result in any cost to taxpayers that he was aware of. Bill Patton, a spokesman for the Pennsylvania House Democrats, could not confirm that assertion.

Illinois state Rep. David McSweeney, a Republican, proposed a ban on the use of public dollars for settlements after revelations of settlements involving members of Congress. McSweeney said he doesn’t know of any Illinois state lawmakers who used taxpayer dollars to settle harassment claims. But more than 200 men and women recently signed a letter saying that harassment in the state Capitol was rampant.

“God forbid, if someone does this behavior,” he said, “you are going to be exposed, and you are to be punished.”

Most of the proposals would cover state lawmakers but not all state employees, even though plenty of settlements have involved the latter.

And in Pennsylvania, the state spent $900,000 on a single payout in 2016, after a longtime employee accused a midlevel manager in the Revenue Department of harassing her, sexually assaulting her, and making racial slurs, including references to slavery, according to the Pittsburgh Post-Gazette.

Minna Kotkin, a law professor and director of the Employment Law Clinic at Brooklyn Law School in New York, questions why there isn’t also a movement to ban the use of public money to settle claims involving employees who aren’t elected officials.

She pointed out that police brutality cases often raise the same questions about employee and employer responsibility, and there aren’t proposals to make individual officers pay in those cases, either.

The proposal in Iowa, unlike in other states, would require all state employees to pay to settle claims against them. All 20 Senate Democrats and an independent senator introduced the bill.

Some victims file claims against employers, not individuals, because it helps ensure that they will be compensated for any damages. The government can easily cut a check to compensate the victim for a lawmaker’s actions, Yamada said, while the individual lawmaker may not have the financial resources to do so.

In Pennsylvania, state Rep. Leanne Krueger-Braneky, a Democrat, said her proposal would ensure the victim is made whole by requiring the state to pay the settlement amount, and then requiring the lawmaker to reimburse the state.

The bill also would allow the state to tap into lawmakers’ pensions to settle claims, Krueger-Braneky said.

“My goal is this language is strong enough that no legislator engages in harassment activity ever again,” she said. “But if it happens there will be a clear, nonpolitical way to address it and a real cost to the legislator.”