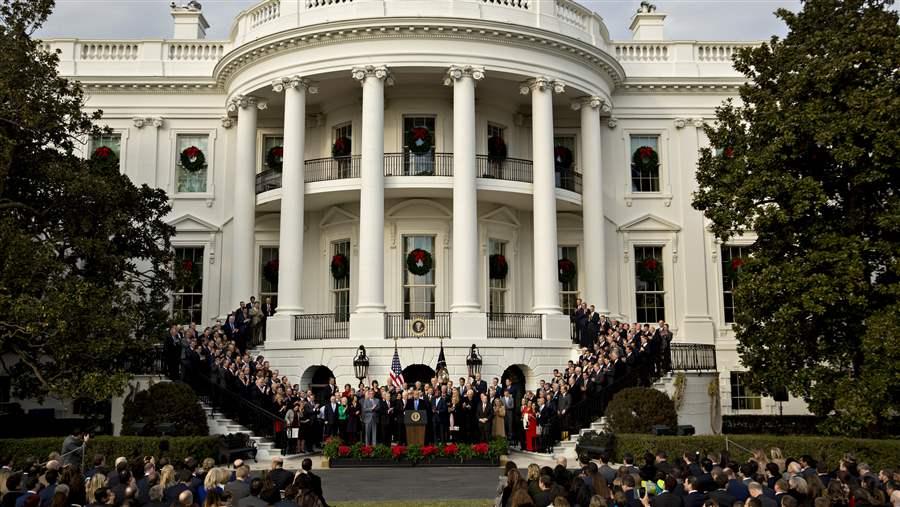 U.S. President Donald Trump, center, speaks during a tax bill passage event with Republican congressional members of the House and Senate on the South Lawn of the White House in Washington, D.C., U.S., on Wednesday, Dec. 20, 2017.  States often face fiscal uncertainty from federal policy changes, but 2018 is unusual because of the scope of the federal tax overhaul.

The federal government is heaping new challenges on state lawmakers as they begin this year’s legislative sessions amid persistent pressure from weak revenue growth and rising long-term costs.

Both the overhaul of U.S. tax law and the eventual possibility of lower federal support for Medicaid programs will complicate budget writing for the fiscal year that begins July 1 in most states. Despite the third-longest U.S. economic recovery on record, lackluster growth in state tax collections has left many policymakers with little wiggle room to balance their budgets. State lawmakers increased general fund spending for the current budget year by 2.3 percent­— the weakest change since spending dropped in the wake of the Great Recession, and almost half of states enacted net increases in taxes and fees, the National Association of State Budget Officers reported.

More than a decade after the recession hit, most lawmakers still face a difficult fiscal environment as they shape spending plans; some must craft one-year budgets for fiscal 2019, and others will revisit two-year financial blueprints. Meanwhile, they must also prepare for the inevitable next economic recession when the already lengthy expansion eventually succumbs to a turn in the business cycle. But there are positive trends too: Stock prices that have grown over the past year, despite a recent sell-off, could boost tax collections, as may an economy that continues to grow and add jobs.

States often face fiscal uncertainty from federal policy changes, but 2018 is unusual because of the scope of the federal tax overhaul Congress approved Dec. 20 and because of evolving U.S. funding priorities set by a GOP-controlled government. Governors and legislators are trying to figure out how the federal tax code’s transformation may impact their own state’s revenue, a complex task against the backdrop of an election year.

Changes to U.S. income tax law, such as cutting items that can be deducted from income subject to taxes, will affect what some residents owe in state income taxes. A number of states are already predicting more revenue unless lawmakers take steps to mitigate the effects. For example, of 41 states that impose broad-based income taxes, 36 use a federal definition of income as their starting point.

Although the new law lowered federal tax rates, other changes may expand residents’ income that is subject to taxes – an adjustment that will ripple through states’ revenue streams. The net impact on a state will depend on the degree to which its tax rules connect – or “conform” – to federal tax laws. While Iowa may see a tax revenue increase, collections could drop in neighboring Missouri, according to analysts.

State lawmakers will have to decline or accept the consequences of federal tax changes. Some governors, such as Colorado Gov. John Hickenlooper, a Democrat, may spend a portion of the expected state revenue gains. Others, such as Maryland Gov. Larry Hogan, a Republican, said they plan to shield residents from paying higher state taxes that are due to the federal law’s elimination of some deductions and exemptions.

Beyond their direct linkages to the U.S. tax code, some state officials are considering ways to help residents avoid potentially higher federal tax bills from a new $10,000 cap on deductions of state and local taxes (SALT). The cap could hit particularly hard in states where residents pay high income and property taxes, such as New York and California. The average SALT deduction for 2015, among those who claimed it, exceeded the new $10,000 cap in 19 states.

The decisions about how or whether to respond to federal tax changes could be shaped by political considerations in a year in which elections will be held for 46 state legislatures and 36 governors. The first primary is in March. 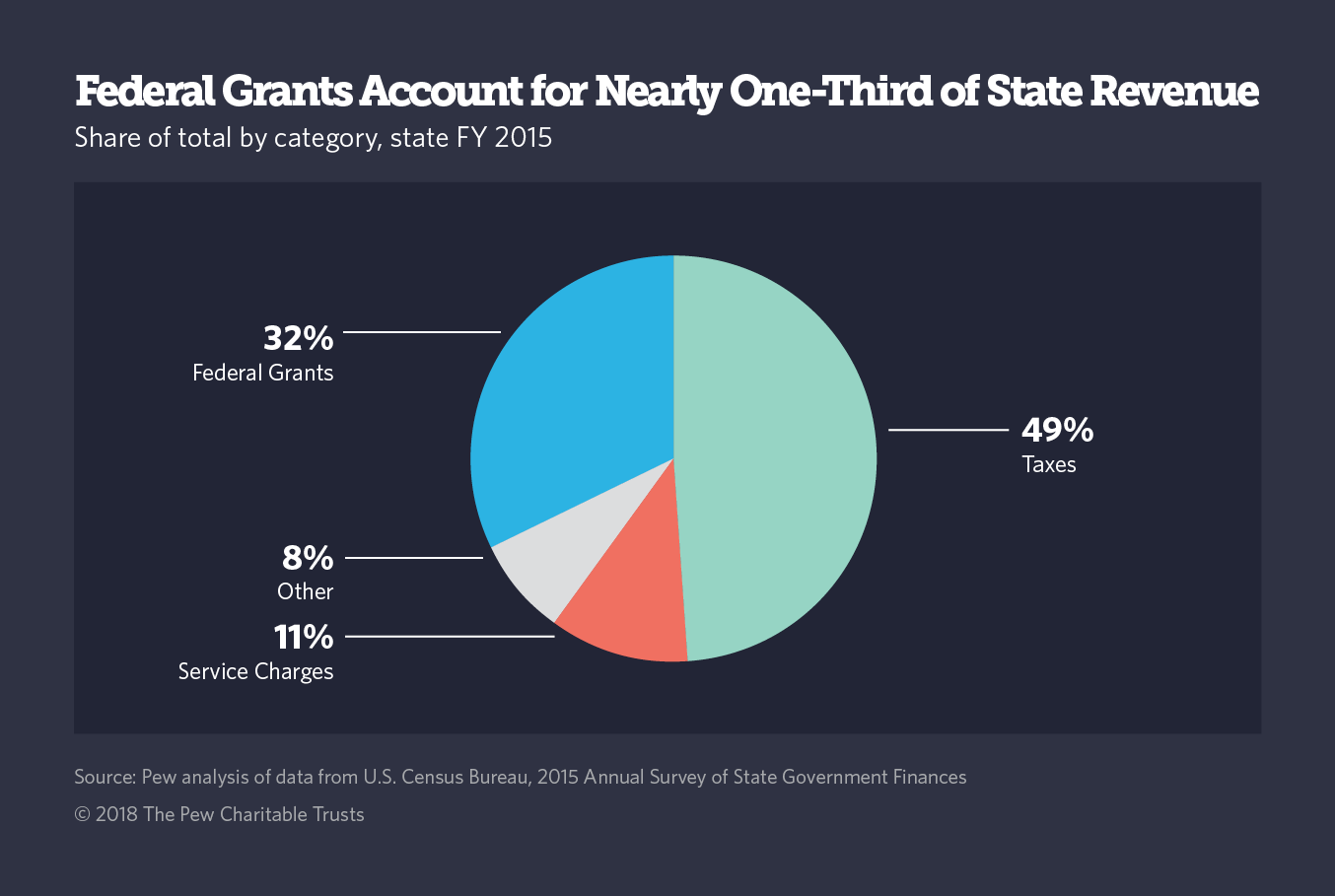 Uncertainty about federal funding for programs such as Medicaid, the joint state-federal health insurance for low-income Americans, prompted many states to craft cautious spending plans for the current budget year, said John Hicks, executive director of the National Association of State Budget Officers. If Congress follows through on ideas to cap or limit federal funding for Medicaid, beneficiaries could lose coverage unless state policymakers decide to cover the difference.

The stakes are high: Medicaid is most states’ biggest general fund expense after K-12 education, and federal cuts could further pressure finances. The share of states’ revenue made up by federal dollars rose to the third-largest on record in fiscal 2015, which captured the first full year of Medicaid’s expansion in some states to previously ineligible adults under the Affordable Care Act.

Medicaid changes could have longer-term implications, too, diminishing the ability of the health program to provide the countercyclical financial support that increases dollars for states when enrollment rises during economic downturns. In a major revision, the Trump administration already has signaled it will allow states to limit access to Medicaid, such as adding a work requirement for certain beneficiaries, as Kentucky recently was allowed to impose.

Lawmakers also are coping with aftermath of two years of weak tax revenue collections, as well as swelling pressure from unfunded public pensions, among other liabilities. And some states are showing signs of structural budget deficits, in which current and future revenue is not enough to maintain services without cuts or tax hikes. 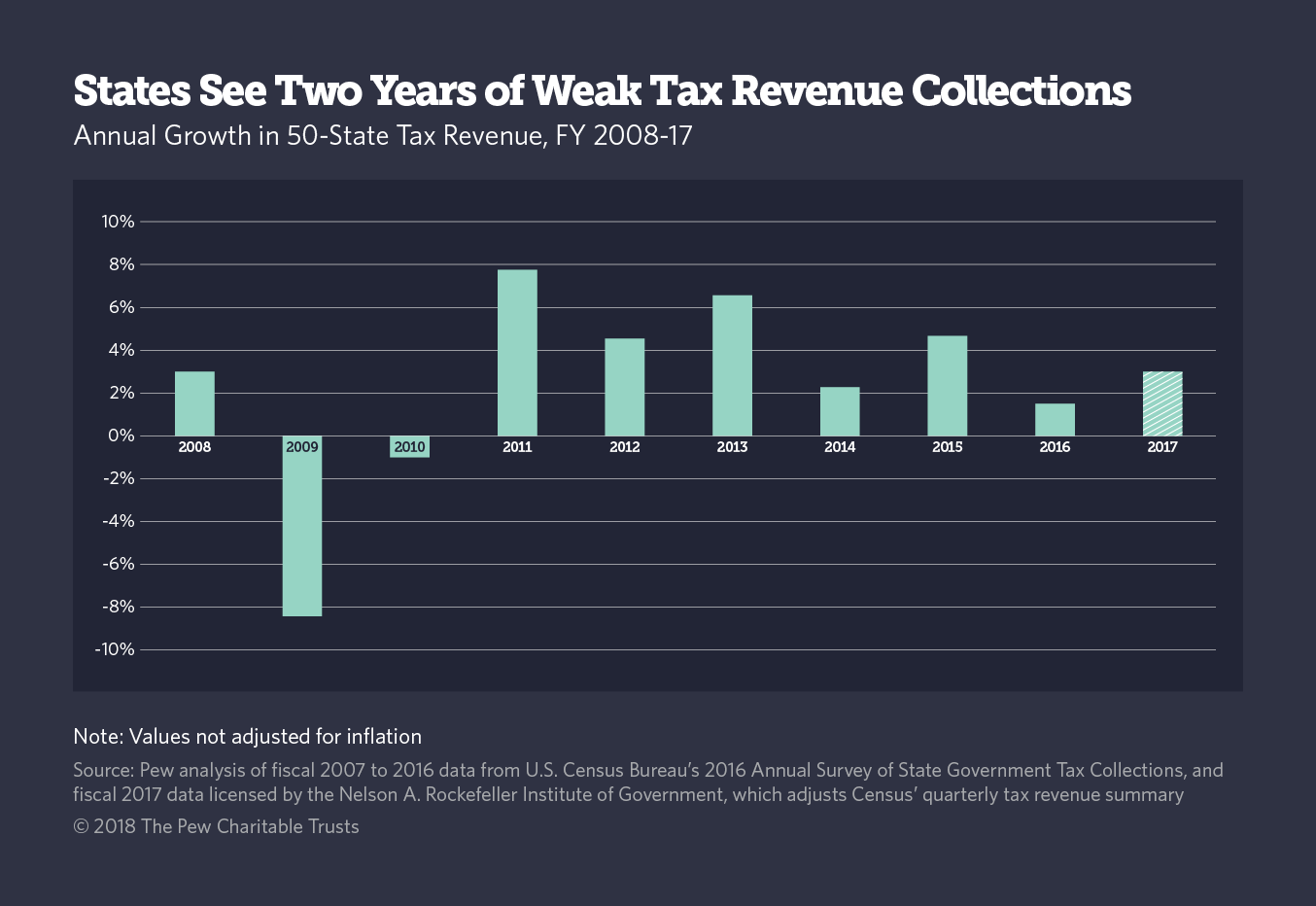 Energy-producing states, which lost tax revenue when commodity prices nosedived, aren’t the only ones under pressure. Massachusetts, for example, dealt with a fiscal 2017 budget gap with cuts to executive branch agencies, among other actions. Looking at 50-state tax revenue, fiscal years 2016 and 2017 saw relatively low growth amid weak gains in wages and consumer spending, which also has been migrating toward services and online purchases that are less likely to be taxed. Low inflation has also kept a lid on consumer prices, and, in turn, taxes collected on purchases. Sluggish revenue has translated into a range of fiscal moves by states:

Certain states have faced ongoing challenges from rising fixed costs and expenses that exceed revenue. Unfunded pension costs, in particular, have been growing faster than states’ economies, equaling 7 percent of 50-state personal income in 2015 – up from 3.2 percent in 2005. Claims on future revenue can limit states’ budget flexibility, and less money may be available to fund other priorities, such as education, roads, or health care for low-income residents.

These liabilities also can affect credit ratings and borrowing costs. S&P Global Ratings said mandatory spending in areas such as Medicaid, debt, and pension and retiree health benefits is high enough in five states – Connecticut, Illinois, Oklahoma, Pennsylvania, and Rhode Island – that their “budgetary discretion is more limited.” In another sign of strain, 11 states have a negative fiscal balance – their total revenue fell short of expenses between fiscal 2002 and 2016. Long-running imbalances can create an unsustainable fiscal situation.

Some relief may be in store in fiscal 2018. Revenue collections could strengthen if taxpayers take capital gains from sales of stocks that have grown over the past year, despite a recent sell-off. Federal tax reform may boost U.S. economic growth in 2018, some analysts say.

Even as state lawmakers manage immediate budget concerns, some are also focusing on preparing for the next recession by building financial reserves. A recession is not imminent, economists say, but many state officials say they do not want to get caught unprepared.

Twenty-six states have rebuilt their rainy day funds as a share of spending to levels greater than those before the recession, and a number of states are expected to further expand these cushions in fiscal 2018. But some have struggled to save given sluggish tax revenue growth. And others, such as energy-dependent Alaska, have had to make recent withdrawals to plug budget gaps. 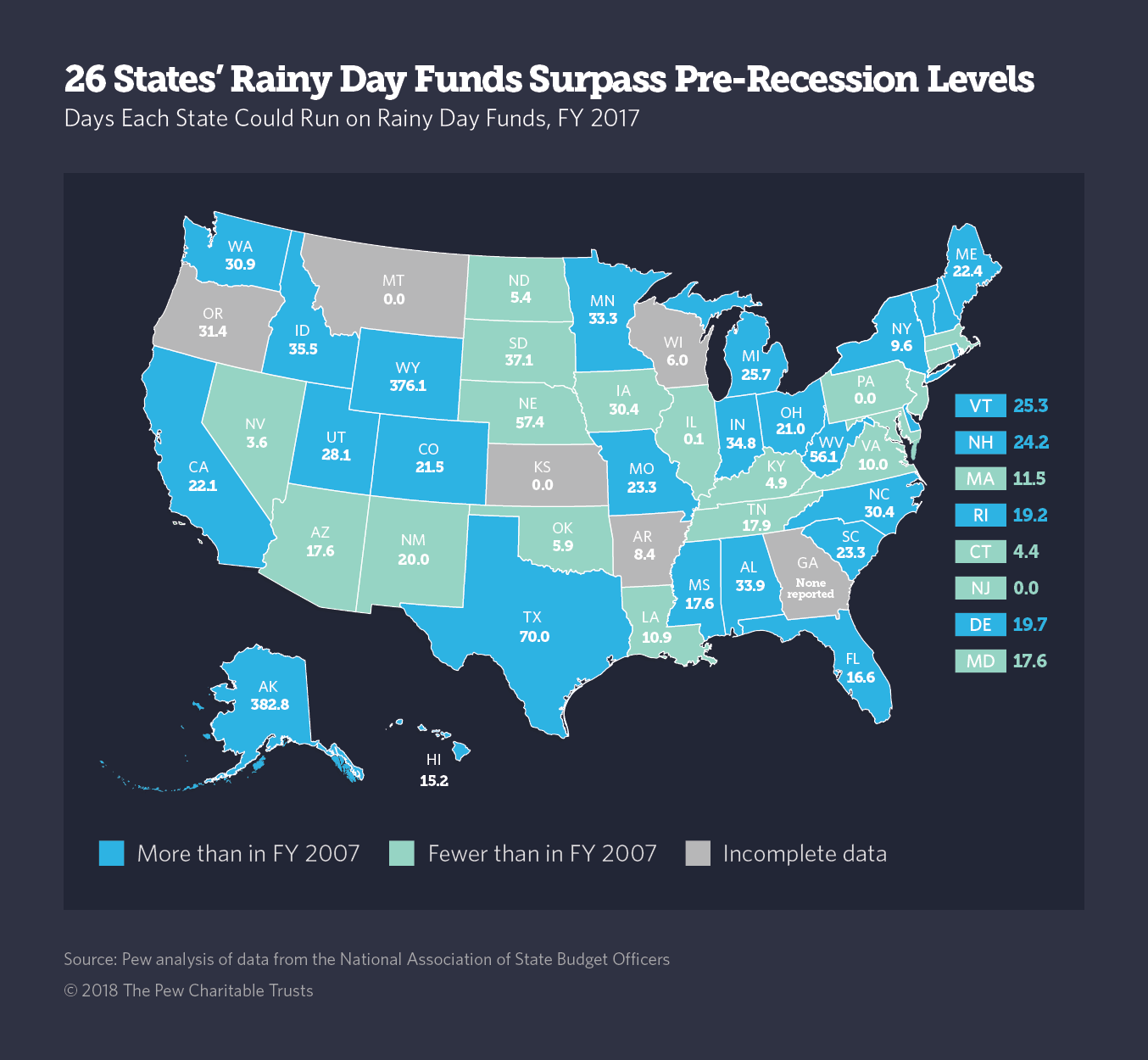 Despite states’ progress, just 16 would have the total reserve funds they would need to “withstand a moderate recession with limited fiscal disruption,” according to Moody’s Analytics, which conducted a “stress test” in 2017 to determine how prepared states are for a recession. Another 19 states would have most of the needed funds, and the remaining 15 would have significantly less than what they need, Moody’s estimated. At least one possible source for savings – cutting staff levels – may yield limited relief for states during the next downturn, because payrolls never recovered from cuts made after the recession began.

In good news for lawmakers, states may get some fiscal help from the ongoing economic expansion in 2018, growth in wages, and capital gains tax collections. While rising wages are not a panacea, they should help boost tax collections to some extent as worker income expands and consumers increase spending. States may benefit unevenly, though, because of differences in economic conditions. Trends in state personal income show a wide disparity, with economies in areas dependent on troubled industries, such as agriculture, shrinking over the year ending in the third quarter of 2017, even as personal income rose in most states.

Barb Rosewicz is a project director, Ruth Mantell is an officer, and Daniel Newman is a senior associate with the states’ fiscal health project of The Pew Charitable Trusts.