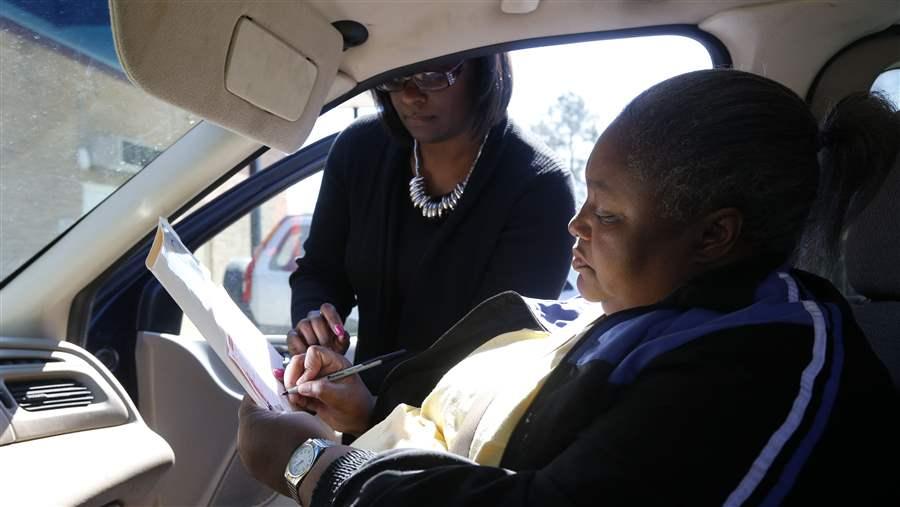 A South Carolina voter, prevented from entering a polling place by her physical disability, receives assistance from a poll worker on the day of the state’s 2016 Democratic presidential primary. More people with disabilities are encountering barriers to voting, a problem that is being exacerbated by the widespread return to paper ballots.

For decades, Kathy Hoell has struggled to vote. Poll workers have told the 62-year-old Nebraskan, who uses a powered wheelchair and has a brain injury that causes her to speak in a strained and raspy voice, that she isn’t smart enough to cast a ballot. They have led her to stairs she couldn’t climb and prevented her from using an accessible voting machine because they hadn’t powered it on.

The barriers Hoell has faced are not unusual for the more than 35 million voting-age Americans with disabilities. As many jurisdictions return to paper ballots to address cybersecurity concerns — nearly half of Americans now vote on paper ballots, counted digitally or by optical scanners — such obstacles are likely to get worse.

Many people with disabilities cannot mark paper ballots without assistance, so they rely on special voting machines that are equipped with earphones and other modifications. But the return to paper ballots has made poll workers less comfortable with operating machine-based systems, said Michelle Bishop, a voting rights advocate for the National Disability Rights Network. Under increasing pressure to oversee a smooth, secure election, untrained poll workers have discouraged the use of accessible voting machines, leaving voters with disabilities behind.

It’s a constant complaint from voters with disabilities nationwide, Bishop said. In the last election, for example, a voter called her to report that a machine was placed in the corner, turned off, with a flower wreath hung on it.

“The message is: You’re not wanted here,” Bishop said. “We get reports of poll workers discouraging their use. They say, ‘I haven’t been well trained,’ ‘It’s intimidating to me,’ ‘We’ll set it to the side and get through Election Day.’ ”

Indeed, according to an October study by the Government Accountability Office, nearly two-thirds of the 137 polling places inspected on Election Day 2016 had at least one impediment to people with disabilities. In the 2008 presidential election, it was fewer than half. The GAO also reported that state inspections of voting accessibility had fallen nationally over the same time.

Among the infractions: The accessible voting machine wasn’t set up and powered on, the earphones weren’t functioning, the voting system wasn’t wheelchair-accessible, or the voting system didn’t provide the same privacy as standard voting stations.

Lack of access to proper voting machines, among several other issues, has led to a decline in participation, according to a survey of voters in the 2016 election by Rutgers University. Voter participation among people with disabilities has gone down over the past two presidential elections — from 57.3 percent in 2008 to 56.8 percent in 2012 and 55.9 percent in 2016.

Among non-disabled Americans, voter participation also dropped between 2008 and 2012 — from 64.5 to 62.5 percent, according to the Rutgers survey. But that percentage changed little from 2012 to 2016.

Other factors that contribute to the problem — such as a lack of training for poll workers, limited access to registration materials, and insufficient resources for election officials — were laid out in a September 2016 white paper from the Ruderman Family Foundation, a disability rights advocacy organization.

The proliferation of voter ID laws may compound the problem, since people with disabilities are less likely to drive and to carry a photo ID.

“We’re segregating in the way we vote,” Bishop said. “Separate is not equal. That’s a lesson this country should have already learned by now.”

Just 46 percent of West Virginians with disabilities who were eligible to vote participated in the 2016 election, worse than any other state but Kentucky, at 42.5 percent, according to the Rutgers researchers. Gina Desmond, an advocate for Disability Rights of West Virginia, said the lack of access has led many people with disabilities to question their role in the democratic process.

“It’s surprising how many people don’t think they have the right to vote,” Desmond said.

In a predominantly rural and mountainous state, transportation options are limited, said Susan Given, the executive director of Disability Rights of West Virginia. Polling places in the state’s 55 counties are spread out and often located in outdated buildings that aren’t accessible to people with disabilities.

People with disabilities who can’t get into polling places often have to vote curbside with assistance from a poll worker, Given said, robbing the voter of a private and independent ballot.

The organization also gets complaints that machines for voters with disabilities often don’t work or are turned off, following a similar national pattern.

Recently, Disability Rights of West Virginia hired an advocate who will visit polling places this year to see whether they are accessible. The organization also holds outreach events at high schools, psychiatric hospitals, homeless shelters and service providers to explain the voting rights of people with disabilities.

Voter participation among West Virginians with disabilities did go up by 3 percentage points since the 2012 election. But, Desmond said, the state has a long way to go.

In Colorado, where 69 percent of registered voters with disabilities voted in 2016 — among the highest rates in the country — advocates and state officials have taken numerous steps to make voting accessible, according to Jennifer Levin, a senior attorney at Disability Law Colorado.

In the decade following the passage of the 2002 Help America Vote Act (HAVA), Disability Law Colorado went to all 64 counties in the state, met with clerks, checked for accessibility barriers, and used state funding to help polling places meet federal HAVA and Americans with Disabilities Act standards. (Nationwide, physical barriers to voting places have steadily dropped since 2000, according to the GAO.)

Now after every election, the secretary of state releases a county-by-county audit on whether localities are meeting standards for accessible polling places. After the 2016 election, for example, Denver satisfied a majority of disability access criteria, while El Paso County, home to Colorado Springs, met every one. Because of this enforcement, Levin said, accessibility shortcomings in the state are rare.

In 2015, her organization again partnered with the secretary of state’s office to test five new voting machines. After collecting data, officials settled on one machine that every county will use for voters with disabilities. Now, voters can choose to use a paper ballot or an accessible machine ballot.

The state’s adoption of vote-by-mail and automatic voter registration for all voters also has made it easier for people with disabilities to cast their ballots.

Other states have taken similar measures. Before the 2016 election, New Hampshire adopted a new tablet-based voting system for the blind, while Rhode Island recently became the ninth state to enact automatic voter registration — which eliminates the need for people with disabilities to submit paper forms that are not accessible to them.

Levin finds poll workers are still afraid of new technology. “We get complaints where a person walks in and asks to use the machine, and a worker says, ‘It doesn’t look like you need it,’ ” Levin said. “They were discouraged and intimidated by it.”

City officials in Washington, D.C., said they had poll workers ask every voter whether they want to use a paper ballot or a machine, taking away any excuse for unplugged machines or untrained workers. But several polling places still fall short, according to a 2016 survey by Disability Rights DC at University Legal Services, a nonprofit advocacy organization.

Some states are trying to bridge the access gap through legislation. In New York state, where the voter participation rate among people with disabilities is 48.8 percent, Senate Democrats in January introduced 13 voter-focused pieces of legislation. One bill would redesign paper ballots to be more readable. Another, written by state Sen. Michael Gianaris, would allow the distribution of voter registration forms at offices that provide services to people with disabilities, while also allowing voters to change their precinct to one whose voting systems are more accessible.

“We’re looking for ways to make voting easier at a time when people are trying to make voting harder,” said Gianaris, a Queens Democrat. “Our record for voter participation is abysmal. The fight we’re having right now is to open up the process.” 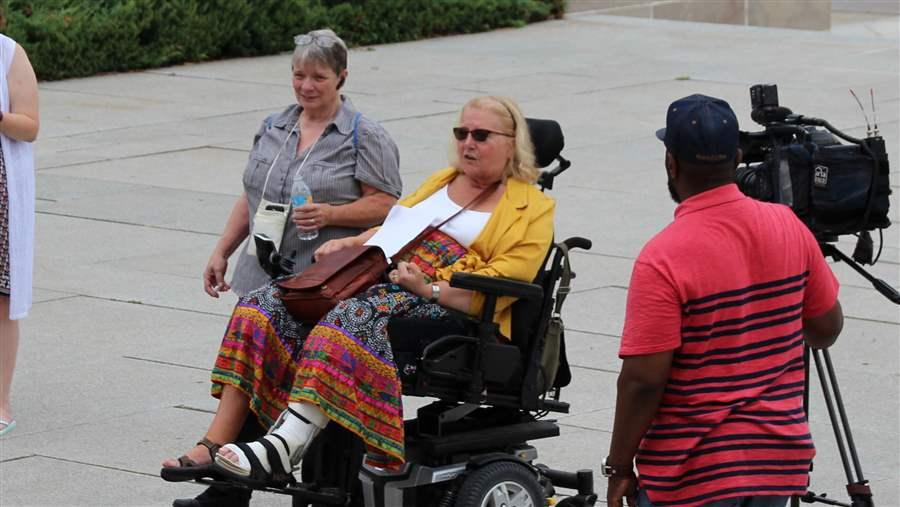 Kathy Hoell, second from left, joins another activist to advocate for disability rights at the state Capitol in Lincoln. Hoell helped Nebraska become a nationwide leader in voter access for people with disabilities.

“Part of my way of dealing with these things is I just go to the top and start yelling,” Hoell said. After HAVA was enacted, Hoell went to John Gale, Nebraska’s secretary of state, to persuade him to invest in accessible voting machines, better train poll workers, and make polling stations compliant with federal disabilities regulations.

In the years since, she said, his office has found ways to include people with disabilities in the voting process.

As a result, according to the Rutgers study, Nebraska has the highest voter participation rate among persons with disabilities in the country, at more than 70 percent.