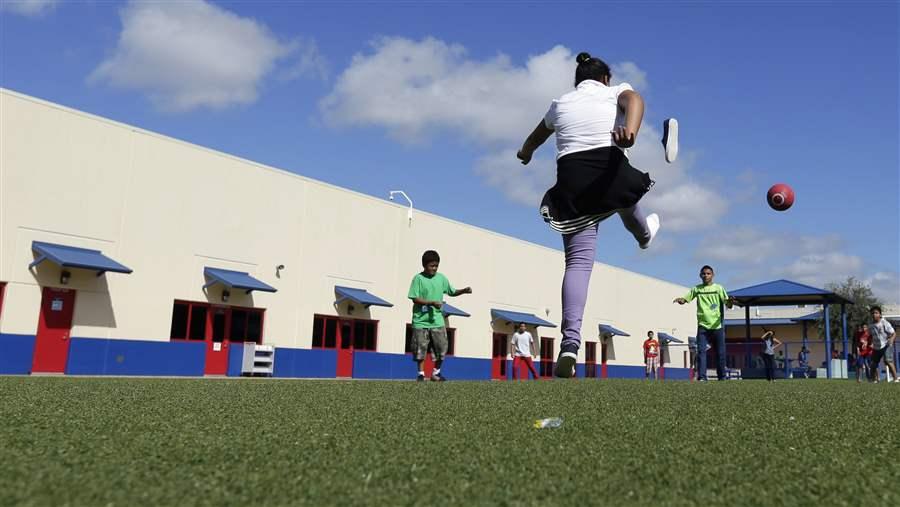 Children play in a Texas residential center for women and children detained at the Mexican border. The number of children found at the border has increased sharply since April, after a drop early in the Trump administration.

ROCKVILLE, Md. — After a dramatic drop early last year, the number of Central American children crossing the U.S.-Mexico border illegally has been rising sharply since April.

Advocates say the increase is being driven by fears of gang violence at home — fears that outweigh heightened concerns about deportation under the Trump administration.

“The reality is these children are not necessarily coming to the U.S., they’re just trying to get away from their home country,” said Catherine Hulme, project manager and attorney for unaccompanied children at the Pro Bono Resource Center of Maryland in Baltimore.

During the 2016 presidential campaign, Donald Trump promised to crack down on illegal immigration. And early in his administration, officials threatened to prosecute parents seeking to bring children from Central America.

The number of children crossing the southwest border appears to reflect that. Fewer than a thousand children were caught alone at the border in April, down from 7,346 in November 2016.

But their numbers have been increasing more recently, surpassing 4,000 in December. The number of family groups including children has increased even faster, growing from 1,118 in April to 8,121 in December.

The vast majority of the arriving children — almost three-quarters of children caught alone and more than 95 percent of those caught with family — are from Guatemala, Honduras and El Salvador.

Instead, they usually are turned over to the federal Office of Refugee Resettlement and live temporarily in a shelter, while their family or other sponsor can apply to gain custody of them. The children still face deportation proceedings in immigration courts.

U.S. Immigration and Customs Enforcement warned last summer that the trip is “dangerous and unlawful” and said “if you have no basis to remain in the United States, you will be identified, apprehended and returned to your home country.”

Brian Hastings, the Border Patrol’s acting chief of operations, blamed the increase on federal law that forces the agency to allow Central American children into the country rather than deporting them.

“We are creating a draw for people,” Hastings said, adding that the agency is drafting legislation that would address the issue.

When it comes to family groups, analysts say it’s not clear why the number is increasing, given that adults from Central America are subject to immediate deportation unless they can claim racial or political persecution to apply for asylum.

“If an entire family comes together, you’d just be setting yourself up to be separated at the border and sent back,” said Maryland state Del. Ana Sol Gutierrez, a Democrat and El Salvador native who volunteers to translate for families in local courts. Some parents might feel a need to bring very small children themselves, rather than see them travel alone, Gutierrez said.

Randy Capps, research director of U.S. programs at the nonpartisan Migration Policy Institute in Washington, said it’s possible some Central Americans are trying to sneak across the border with their families to avoid calling attention to relatives already in the United States illegally.

“It could have something to do with risks of coming in unaccompanied and identifying potential sponsors,” Capps said.

The children have been resettled in every state in recent years, with Los Angeles County getting the most between October 2016 and September 2017, at 2,893. Florida, Maryland, New York and Texas each had two counties in the top 10, and Virginia had one.

Those who work with the young newcomers say most of the immigrant children talk of fleeing gang violence. “The gangs have taken over everything,” a 19-year-old told a Maryland magistrate last week, explaining why he fled Honduras in 2015 and is unable to return.

Some analysts who favor tighter controls on immigration see the recent increase as a byproduct of moves to give legal status to so-called Dreamers, children brought to the United States illegally by parents years ago — even though the newcomers would not qualify for that status.

“Any time there’s talk of amnesty, more illegal immigrants come thinking they can get some kind of status or be part of some future amnesty,” said Andrew Arthur, a fellow in law and policy at the Center for Immigration Studies, a Washington, D.C., think tank that favors decreased immigration.

Arthur said Border Patrol officers in South Texas told him that smugglers hesitated to bring children in early 2017, thinking the children might be turned back and they wouldn’t be paid. But as it became clear that children would still be reunited with their U.S. relatives, the traffic started up again, Arthur said. 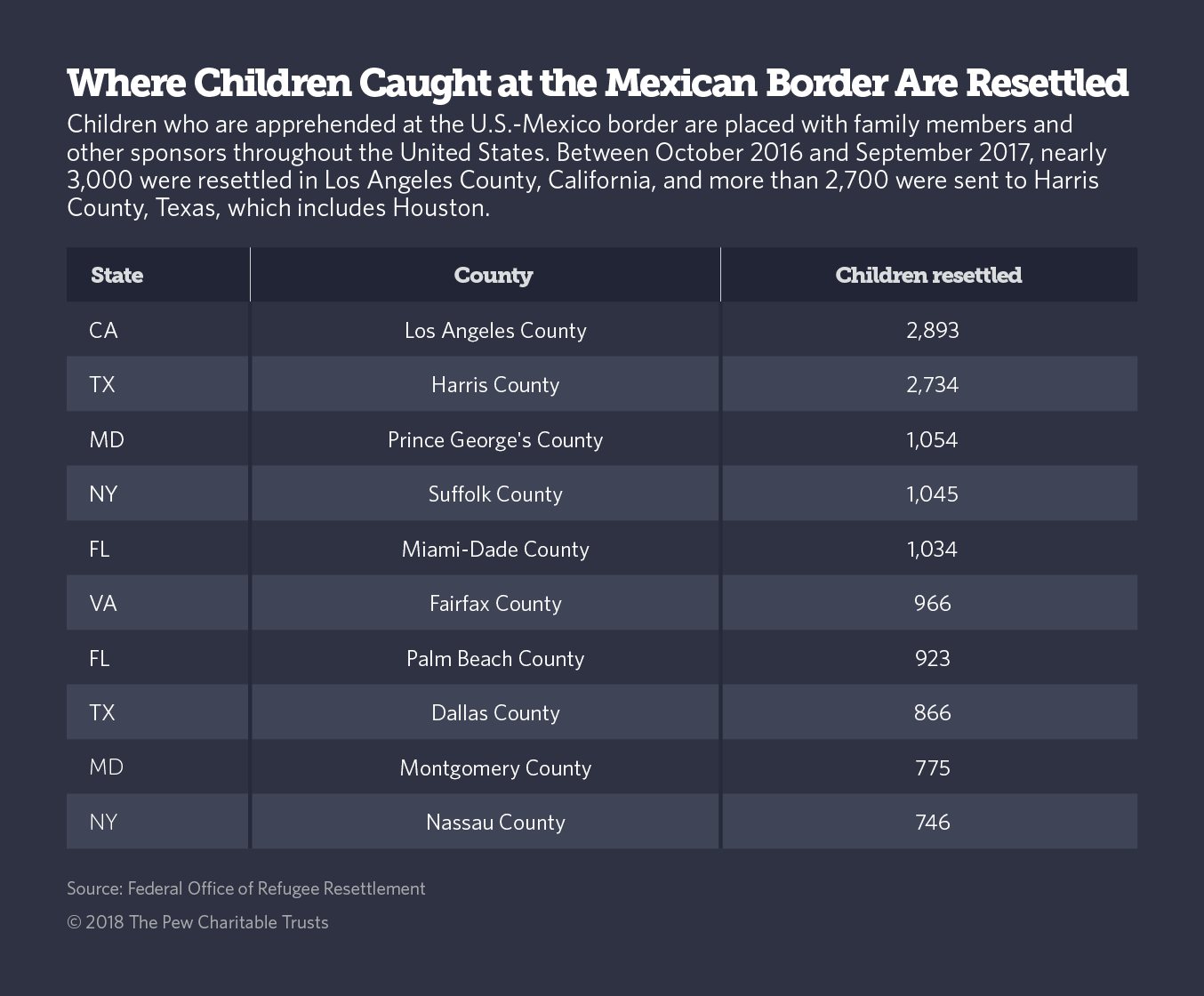 At a Maryland circuit court in this Washington, D.C., suburb, the 19-year-old from Honduras told the magistrate his story. He was playing ball in the street one day with five friends, all 13- and 14-year-old boys, and sat on the curb with them afterwards. He got up to leave first, and as he walked away, gangsters dressed as police officers walked up and killed the other five boys. The gang members fled, and he never learned why his friends were killed.

“Nobody can live there now,” said the teenager, who now lives in Maryland with his mother. She came to the United States when he was a small child, sending money home to support him and his little brother, who made the trip with him in 2015.

One way to get legal status is by gaining asylum, granted in cases in which unauthorized immigrants can show they were persecuted at home based on their religion, race or political beliefs. Another is through state family court rulings, such as those being sought here, that a child has been abandoned by at least one parent, which can lead to a green card for the child.

Earlier that afternoon, a 15-year-old from El Salvador told the magistrate how his mother, a fast-food cook in Maryland, had sent for him and his little brother to come to the border last year.

Had he waited until his 15th birthday, the boy said, the gangs would have recruited him by force. They scaled security fences at his school and took older boys away, threatening to kill their families if they refused, the boy said.

“They say, ‘You’ll never see them again,’ ” he said in court. Now that he’s here, he said, he’s attending high school, likes science courses, and wants to join the Marines after graduation.

Jennifer Alonso, who heads an immigration law firm in Maryland and represented one of the families seeking legal status for a child, said she’s spoken to thousands of children and parents in the past four years and “hears horrifying cases practically every week.” One Maryland man told her this month that his three nephews in El Salvador had been kidnapped and murdered, their bodies dismembered and scattered.

“There is a great misconception that Central Americans are coming solely to work and for economic reasons,” Alonso said. “That may have been true in recent decades but right now, I can tell you they are coming out of fear.” 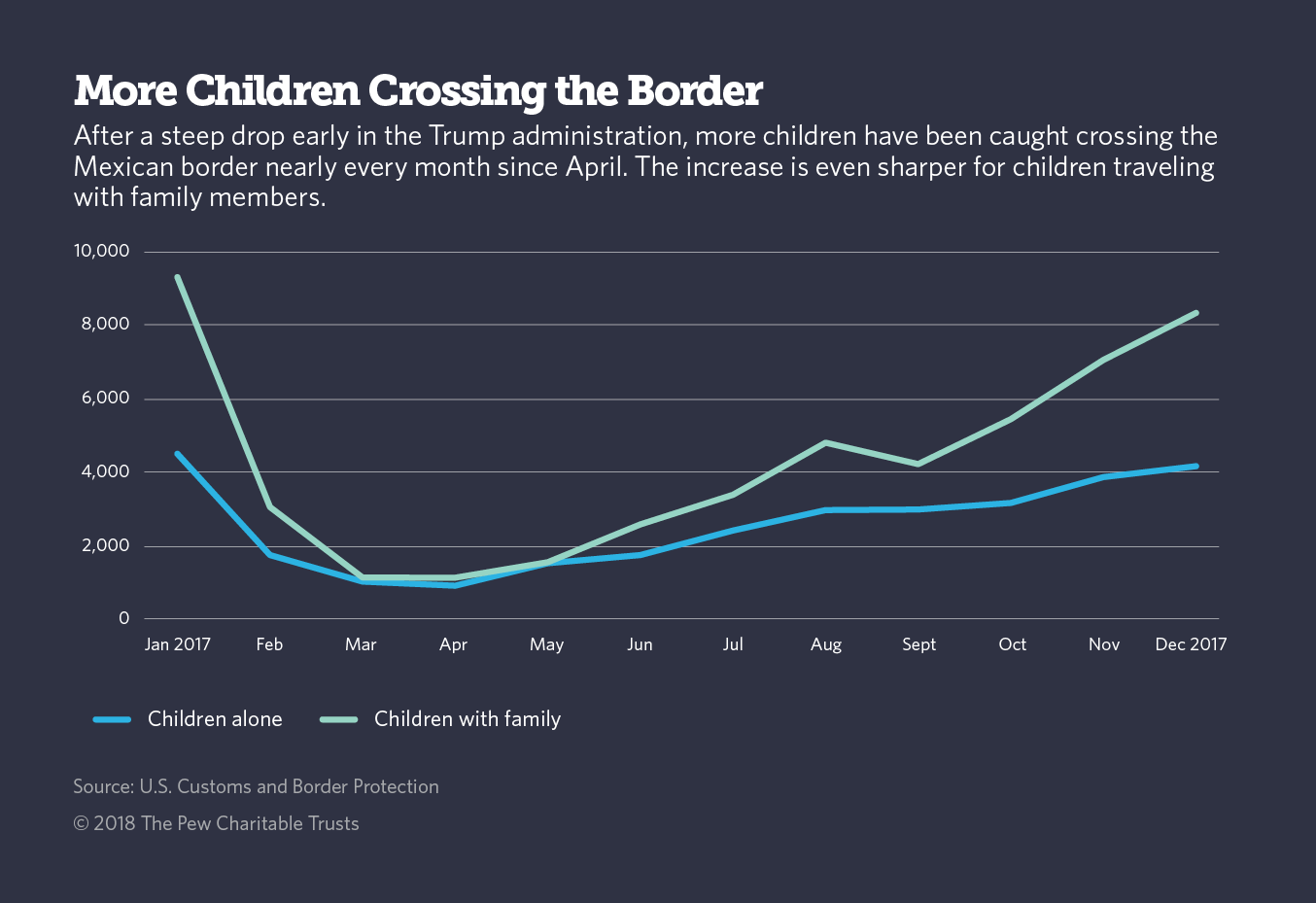 Today’s migrant children and the families hosting them face more hostility under the Trump administration, said Valerie Twanmoh, director of the Esperanza Center in Baltimore, a charity that helps families reunite with children who were detained at the border.

In Maryland, immigration authorities have contacted families and asked to see homes where children will live, Twanmoh said. This has raised concerns among some about exposing their immigration status, and some have backed out of agreements to host children.

In Los Angeles, some parents are afraid to claim their children and turn to surrogate hosts who might be cruel to the children or force them to drop out of school and work, said Mercedes Núñez Roldán, a manager for released youth at an Esperanza center in Los Angeles. The center handled 2,300 children from the border in the past year.

“You ask them how they’re related to the child and they say, ‘a friend,’ ” she said. One child ran away from such an arrangement and ended up sleeping at a construction site so he could stay in school, she said.

But worries about deportation aren’t enough to stop many parents.

“There’s no price that’s too high, if you’re trying to reunite with children,” Twanmoh said. Families might save for years to pay for the trip, she said, and the children sometimes travel for weeks or months to cross Mexico and get to the border.

“You wouldn’t make that journey, as dangerous as it is, if you thought you could survive in your home country,” Twanmoh said. “No rational person would do it.”