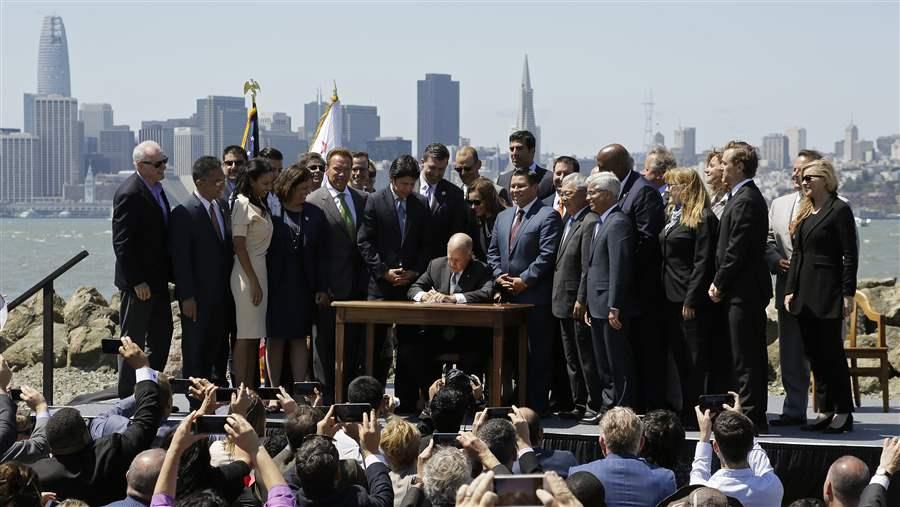 Trump’s environmental and energy priorities are diametrically opposed to those of many left-leaning state officials. While the president has pushed to reduce regulations on businesses and open up new areas to oil, gas and coal extraction, Democrats generally want to crack down on polluters and reduce fossil fuel emissions that contribute to climate change

Add partisan outrage, and you get a recipe for a knock-down, drag-out fight. On issues from public lands to clean energy, Democratic attorneys general are suing the federal government, and Democratic state lawmakers are dreaming up ways to block or limit federal action. And from Washington state to Virginia, state leaders are getting behind policies — such as a tax on carbon emissions — that go against the president’s priorities.

To be sure, Democrat-led states are in the minority. While Democrats control both legislative chambers and the governor’s office in seven states, Republicans control 25 state governments. These GOP leaders have cheered on the Trump administration as it moves to eliminate Obama-era regulations such as the Clean Power Plan, an approach Republicans say will help the economy.

The Trump administration set the tone for the year when, Jan. 4, the Interior Department announced it was planning to open up almost all federally controlled land beneath the ocean to oil and gas drilling. The move incensed state leaders from coast to coast, even some Republicans who typically agree with Trump.

Leaders in deep-blue California responded swiftly. Gov. Jerry Brown, Attorney General Xavier Becerra and the California Coastal Commission, a regulatory agency, all vowed to fight the plan. “We are evaluating all of our options to protect our state’s pristine natural resources,” Becerra said in a statement.

“We’ve fought similar efforts before, and we will fight them again,” Coastal Commission Chairwoman Dayna Bochco said in a statement. Her agency has the authority to deny offshore drilling proposals, although denials can be overruled by the federal government.

State Sen. Hannah-Beth Jackson, a Democrat who represents the Santa Barbara area, reintroduced a bill that would prohibit the State Lands Commission — another regulatory agency — from approving new leases for drilling-related infrastructure along the California shoreline.

Jackson said she’s optimistic that the bill will pass this time. “We’re seeing a great deal of interest, a great deal of indignation, at such a shortsighted — frankly stupid — policy,” she said of the Interior Department plan.

Jackson wants to prevent another oil spill like the 1969 Santa Barbara disaster, when more than 4 million gallons of oil, or 100,000 barrels, filled the harbor, some of it washing up on local beaches. She also said the plan to increase offshore drilling is “appalling” given the damage that fossil fuels-driven climate change is already inflicting.

Her district just endured the biggest wildfire in state history, followed by devastating mudslides. “We need to do everything we can to protect the planet,” she said. 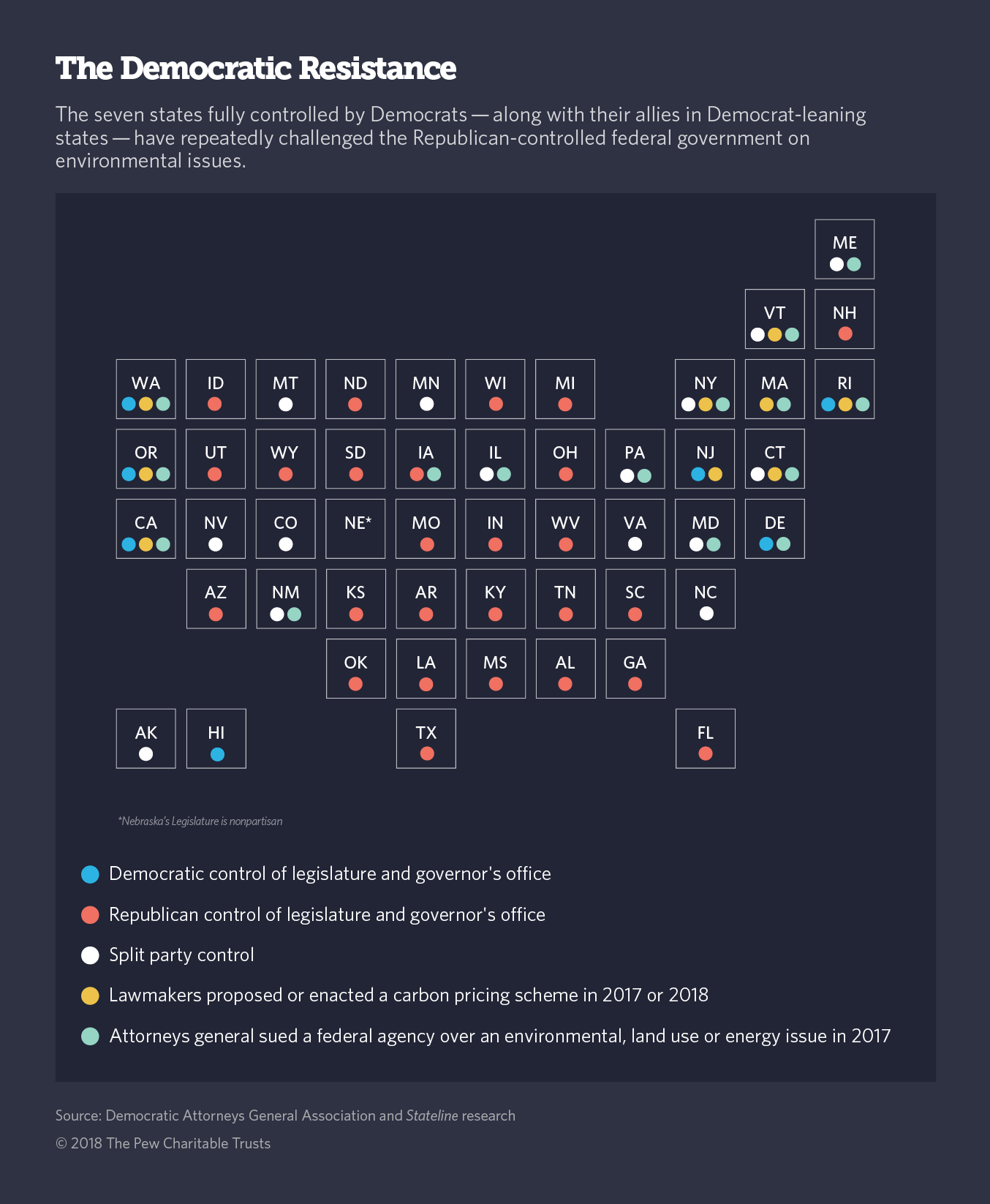 States’ first line of defense against unwanted federal policy is litigation. And since Trump took office a year ago, attorneys general haven’t held back.

That’s almost triple the number of lawsuits filed by two or more states during the most litigious year of Obama’s tenure, and far above the handful of multistate lawsuits that were typically filed in a given year against the Reagan, H.W. Bush or Clinton administrations, he said. Lawsuits started to rise under George W. Bush.

Twelve of last year’s lawsuits filed by multiple Democratic attorneys general involved environmental policy, according to Nolette’s count. Two other lawsuits on the issue were filed by a single state.

Most of the lawsuits filed so far were intended to stop rollbacks of Obama-era rules such as air pollution standards and energy-efficiency standards for appliances. The cases are guaranteed to at least slow down the regulatory process as they wend their way through the courts.

Republican attorneys general, meanwhile, have praised the federal government for scrapping regulations they oppose. “I applaud President Donald J. Trump for making deregulation an immediate and continued focus of his Administration,” Arkansas Attorney General Leslie Rutledge, the chairwoman of the Republican Attorney Generals Association, said in a statement in December.

This year could bring two blockbuster legal challenges from Democrats, as Trump’s Environmental Protection Agency is planning to repeal Obama’s Clean Power Plan, which aimed to reduce power plant emissions, and is reconsidering fuel-efficiency and tailpipe-emission standards for cars and light-duty trucks.

Democratic attorneys general have made clear their willingness to sue to protect those regulations. New York Attorney General Eric Schneiderman already has formed a coalition of 23 state attorneys general and city chief legal officers in order to defend the Clean Power Plan.

Scrapping the car emission standards could lead to an avalanche of litigation, legal experts say, because the Trump administration would likely also rescind a federal waiver that allows California and a dozen other states to set their own, stricter tailpipe emissions limits.

“There would be a huge lawsuit battle. There’s no question that this would be litigated,” said Ann Carlson, a professor of environmental law and co-director of the Emmett Institute on Climate Change and the Environment at the University of California, Los Angeles.

Lowering the federal standards and requiring California to follow them would make it very difficult for California to reach its ambitious goal of reducing greenhouse gas emissions to 40 percent of 1990 levels by 2030, legal experts say. Transportation is the state’s largest source of greenhouse gases.

Emissions in the power sector are already declining nationwide, as utilities switch to cheaper, cleaner natural gas. But transportation emissions are going up, Carlson said. “You really need government intervention on the transportation side.”

Going Their Own Way

Leaders in blue states also are advancing policies that counter federal action. For instance, after Trump’s EPA decided not to ban a pesticide called chlorpyrifos that studies say can harm fetal development, California placed the substance on its list of most dangerous chemicals.

Many state efforts this year will focus on fighting climate change, in defiance of a federal government that has wiped references to the phenomenon from agency websites and a president who has dismissed it as a hoax “created by and for the Chinese.” 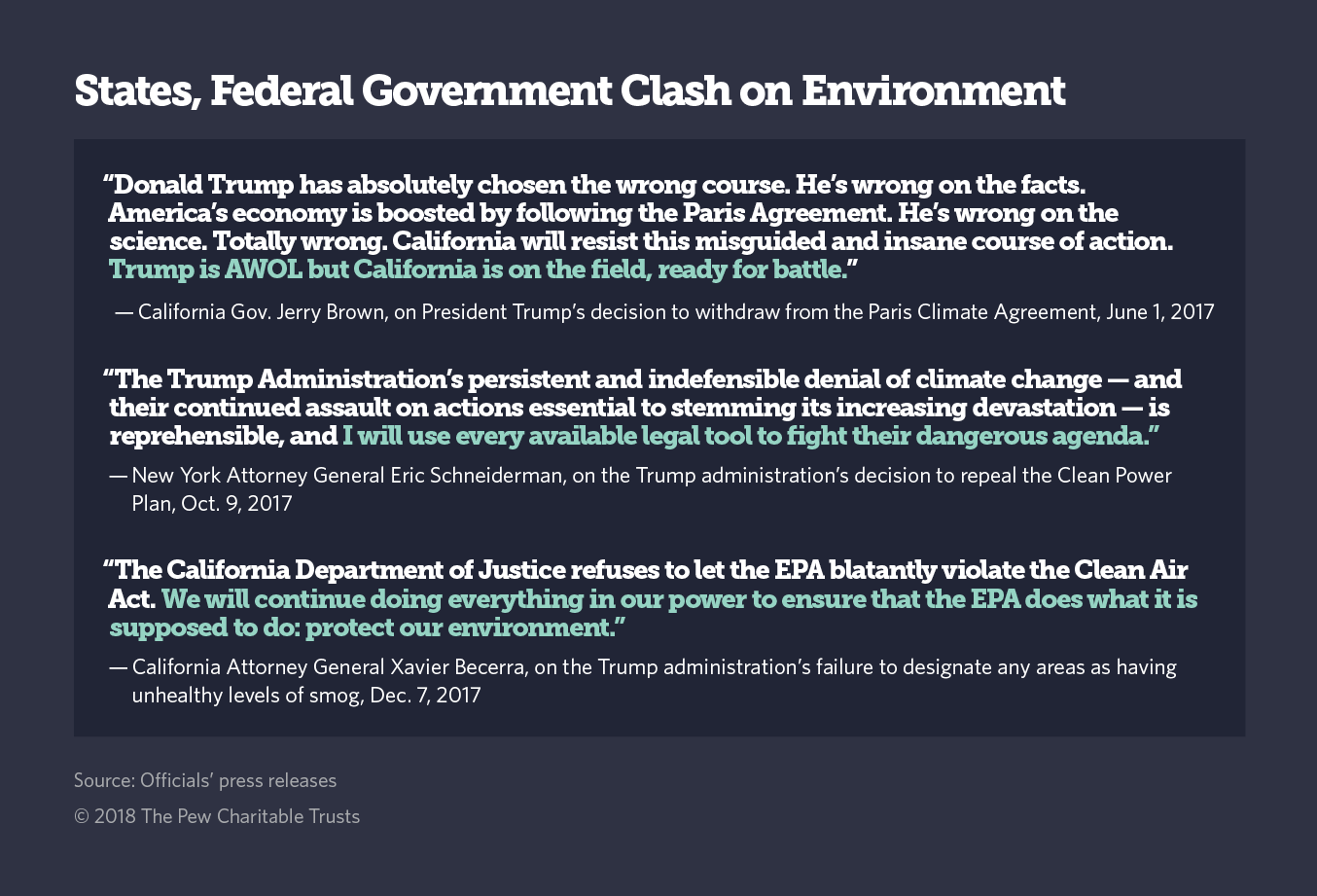 Inslee has proposed taxing carbon emissions in order to push industry to switch to cleaner fuels. A carbon tax bill also is pending in Vermont, and bills were floated on the issue in New York, Massachusetts, Rhode Island and Connecticut last year.

Washington state Rep. Joe Fitzgibbon, a Democrat, said he expects to introduce a version of Inslee’s proposal in the House. Fitzgibbon proposed two carbon tax bills last year, but neither went anywhere. Voters defeated a ballot initiative that also would have imposed such a tax. He’s hoping this year will be different.

He pointed to the fact that Democrats now control both chambers of the state Legislature and that some businesses have stepped forward to support the carbon tax idea, including Microsoft and Puget Sound Energy, a major utility provider. “There are some factors in play that were not in play last year,” he said. “So we’ll see.”

Passing a controversial tax during the state’s 60-day session won’t be easy. Republican leaders say Inslee’s plan would hurt the economy and consumers by jacking up energy prices. “The energy tax that the governor proposes would drive up the cost of motor fuel and electricity, imposing a huge burden on struggling families,” Republican Senate Minority Deputy Leader Sharon Brown told The Seattle Times.

But Fitzgibbon said it’s important to do it now. “We’re seeing the impacts of climate change really severely in Washington state,” he said. “Every summer, we have the worst wildfires we’ve ever had.” The changing climate is one factor that has increased the number and severity of western wildfires.

Other states are embracing cap-and-trade programs, which involve setting a limit on greenhouse gas emissions and selling tradeable pollution permits to businesses. Oregon lawmakers are considering creating such a system, and New Jersey and Virginia are moving to join a regional program that caps power plant emissions.

Former Virginia Gov. Terry McAuliffe pushed for his state to enter the Regional Greenhouse Gas Initiative after the U.S. Supreme Court put the Clean Power Plan on hold in 2015. “As the federal government abdicates its role on this important issue, it is critical for states to fill the void,” he said in a statement last year.

The current regulations were designed to let Virginia set up a cap-and-trade scheme without the Legislature’s consent. This means Virginia won’t be able to keep the proceeds from pollution allowances as state revenue, as the other nine states in the program do. The draft regulations send that money to utilities instead, to be passed on to ratepayers, said Michael Dowd, director of air division for the department of environmental quality.

That structure would change if bills pending in the House and Senate that authorize the program become law. The proposals, backed by McAuliffe and Northam, would allocate revenue from permit sales to help coastal communities manage sea level rise.