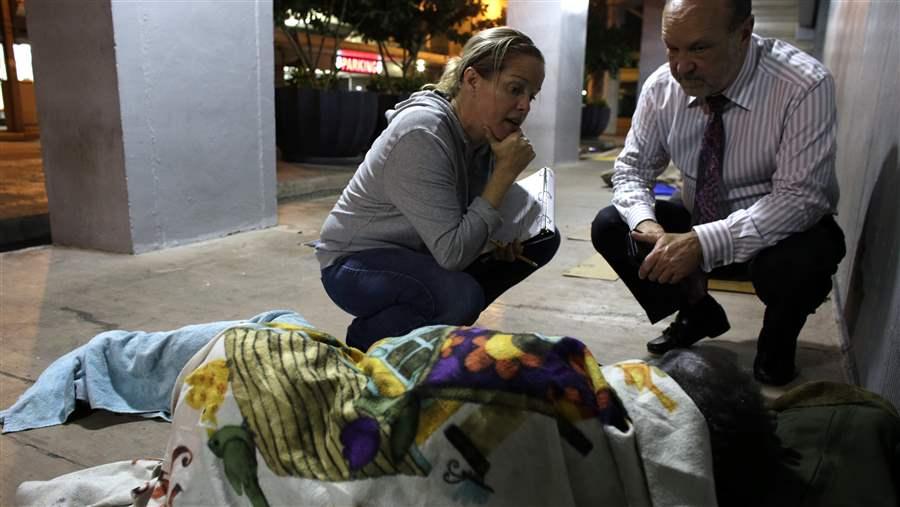 Two volunteers interview a homeless man during the 2017 Point-in-Time count in Miami. This year’s count, for the first time, will ask people if they are homeless because of domestic violence.

In its annual count of the city’s homeless population, New York in 2015 listed how many people fit into 10 different groups: nearly 4,000 chronically homeless, more than 8,000 severely mentally ill, 1,500 veterans, and so on. But when the list got to victims of domestic violence, the annual federally mandated count showed one striking number: zero.

Far from the reality on the ground — nearly a third of homeless families with children have experienced domestic violence, according to the city’s Department of Social Services — the glaring statistical gap in the U.S. Department of Housing and Urban Development’s Point-in-Time count was a red flag for advocates who work with victims every day.

Without an accurate count of people who are homeless because of domestic violence, communities across the country can’t fully understand and serve their homeless population, said Carol Corden, one of those advocates.

“If you ignore them, you ignore a major part of homelessness,” said Corden, the executive director of New York-based New Destiny Housing, which connects low-income victims of domestic violence with affordable permanent housing.

This year, after lobbying from advocates for homeless women and children like Corden, the annual count will for the first time ask people whether they are currently homeless because of domestic violence, sexual assault, dating violence or stalking. HUD had previously suggested that communities ask homeless people if they had ever experienced domestic violence, but the narrower question will help paint a more accurate picture, Corden said.

The Point-in-Time count, a one-night survey of the country’s homeless population, includes unsheltered homeless people, such as those living on the streets or in cars, and sheltered homeless people, including those in transitional housing or subsidized hotel stays. (The count does not include people in rapid rehousing or permanent supportive housing programs.) The snapshot is mandatory for communities looking to receive federal grants to help pay for local homeless services.

Communities, led by their local homeless agencies, this year can choose any of the last 10 days of January to conduct the count. In the Washington, D.C., metropolitan area, for example, the count is Jan. 24. In the Charlotte area, it’s Jan. 31.

Along with asking about domestic violence, officials and volunteers will scour their streets and shelters, asking homeless people where they are staying that night, how many members of their family are staying in the same location, whether they have HIV or a severe mental illness, and whether they are a veteran, a chronic substance abuser, or chronically homeless. Some participants decline to answer, even though the results remain anonymous. While the survey is not exact, the count provides a general estimate of homelessness in the community.

This year’s question was added because HUD officials determined that asking whether homeless people had been a victim of domestic violence in the past wasn’t telling them whether they were homeless because of that violence. William Snow, who works in HUD’s Office of Special Needs Assistance Programs, made this point clear when, earlier this month, he briefed local officials across the country about the upcoming count.

So, for example, of the 554,000 homeless people counted nationally in 2017, about 87,000 said they had been a victim of domestic violence at some point in their lives — a number that does not indicate whether they are currently homeless because they are fleeing abuse.

Brian Sullivan, a spokesman for HUD, said this problem has been “a vexing issue” for the department for the past decade, since it began gathering data on domestic violence survivors among the national homeless population. Refocusing the question, Sullivan said, is just part of the effort to get accurate data.

“We wanted to get to the root of homelessness, as opposed to just gathering data,” Sullivan said. 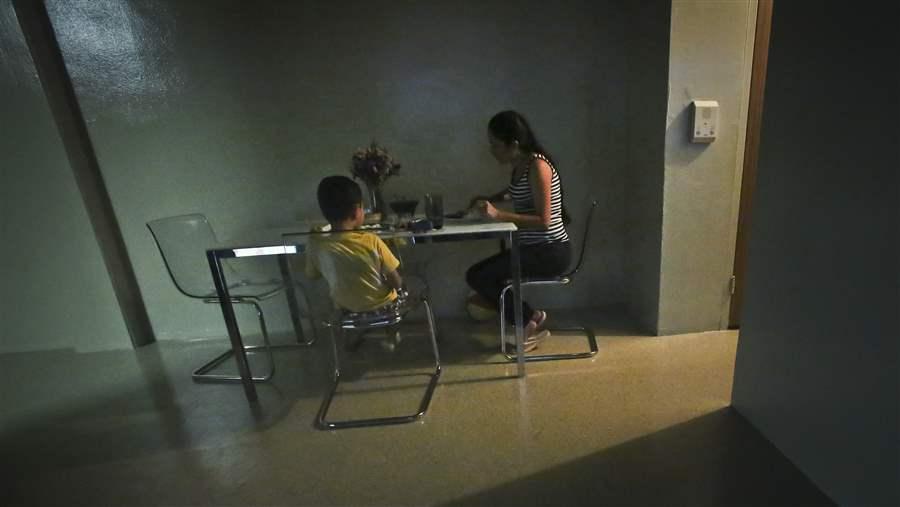 A domestic violence survivor sits with her son for dinner in their new apartment in New York. Among the goals of counting people who are homeless because of domestic violence is to understand how best to steer them into permanent, safe housing.

‘You Care About This Person’

A homeless person who may suffer from a severe mental illness requires different care from one who is a victim of domestic violence, Corden said. In New York City, for example, an accurate estimate can help get families out of the city’s 47 emergency shelters that provide temporary housing for domestic violence victims for 180 days, and into one of the 11 properties with affordable, permanent housing that New Destiny manages.

Asking these intimate questions, though, can be difficult. Getting accurate data starts with training volunteers who assist with the annual count, said Courtney Morton, the housing and research coordinator for Community Support Services of Mecklenburg County, North Carolina, a government agency for the Charlotte area.

During several of the two-hour trainings that take place in the weeks leading up to the count, Morton wants volunteers to understand why they ask specific questions and why answering a question about domestic violence can be traumatic.

“We meet them where they are, try to understand what they might be thinking and offer that this may be a difficult question to answer,” Morton said. “Just be mindful. This is more than getting information. You care about this person.”

Morton and her 250 volunteers will start their count in the early evening of Jan. 31 and will survey homeless people in camps, parks, cemeteries, shelters and temporary houses until 8 a.m. the following day using the mobile app Counting Us. Most of the county’s homeless population — 1,476 last year — is sheltered and concentrated in Uptown, Charlotte’s city center.

But there still are many homeless people in the county who are spread out and hard to reach. Many volunteers are formerly homeless and may have a sense of where people might live, Morton said.

The count does not show the full picture of homelessness, Morton said, but it can provide a good glimpse of a community’s homeless population and help advocates and officials engage with those people.

“Clarifying the problem as much as possible can lead to better solutions,” she said.

Mecklenburg County is one of many localities that choose to ask more questions than are required by the federal government for that reason. For several years, volunteers and officials have been asking homeless people their perspectives on future housing, additional information on income, and in which other communities they have lived.

From 2010 to 2017, county officials used the data on homelessness to more than triple spending on rapid rehousing, which allows families to quickly leave shelters and move into permanent homes of their own. In that period, homelessness went down by 26 percent, despite the county’s overall population increasing by 17 percent — a rare combination in urban areas.

Communities in the Washington, D.C., metropolitan area, which includes parts of Virginia and Maryland, have been asking the homeless population about domestic violence for many years, before it was mandated by the federal government. Last year, officials found that 12 percent of homeless adults in families were homeless because of domestic violence.

In Fairfax County, Virginia, Julie Maltzman, the lead manager of the county’s Office to Prevent and End Homelessness, said the data has been “very useful” in planning homeless and domestic violence programs.

Still, some advocates warn these numbers may not accurately show how many people are homeless because of domestic violence. The count, after all, reflects a community’s homeless population only on one day in January, and it is voluntary. Julie Dworkin, the director of policy at the Chicago Coalition for the Homeless, an advocacy and organizing group that conducts its own count, has concerns about the validity of the count overall.

Still, the more data officials and advocates have on domestic violence, the better they can address the issue, said Linda Olsen, the housing program director at the Washington State Coalition Against Domestic Violence. Current criminal data from the U.S. Department of Justice and other agencies doesn’t provide a full picture of the problem, and homeless victims of domestic violence are undercounted too, Olsen said.

Even the new question in this year’s count may not give an accurate picture of the problem, Olsen said. “I often get worried that they are the hidden homeless.”