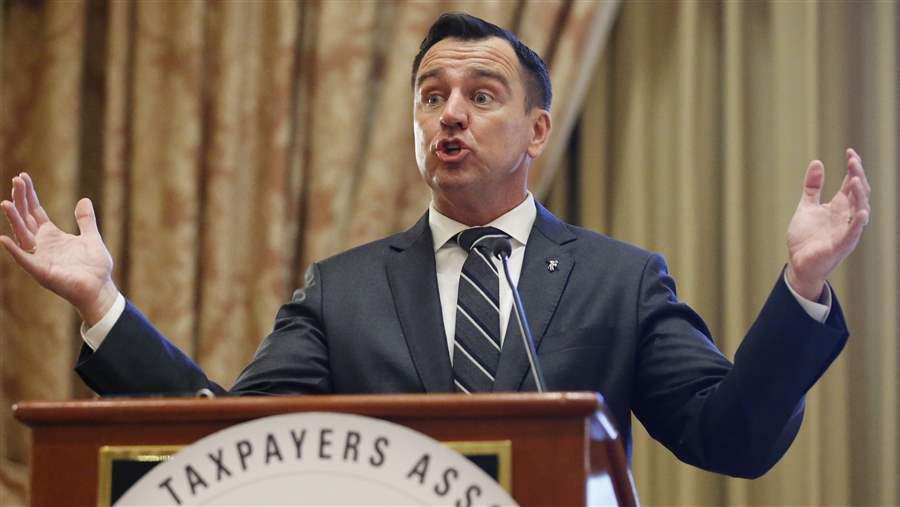 Utah House Speaker Greg Hughes, a Republican, at the Utah Taxpayers Association 2018 Legislative Outlook Conference this month. On the heels of a sweeping rewrite of the nation’s tax laws signed into law in December, many states are considering big changes to state tax codes.

The federal tax overhaul has caused a lot of angst in some state capitals, but leaders in many states also see a rare opportunity to substantially revamp state tax codes, many of which haven’t been significantly changed in years.

The opportunity comes because the 36 states that use the federal code as a starting point for their own personal income taxes are in a position to realize a generous windfall since the federal law eliminates many tax breaks that states might not adjust.

That unexpected extra money has given states the flexibility to rewrite their tax codes without creating as many losers — and the accompanying political hardship — as most tax revamps entail.

Lawmakers in Iowa, which last changed its overall tax structure in 1997, are looking at broad rate changes and other rewrites. Colorado has been looking at sweeping tax changes since at least 1984, mostly directed at sales taxes, but broader changes are getting a push this year from the federal rewrite. Idaho considered significant tax changes in 2015, but fell short, and now lawmakers and the governor are talking up those changes again. Big tax overhauls also are on the table in Michigan and Missouri.

And in New Mexico, GOP Gov. Susana Martinez this week said it’s time for her state to tackle “the big one” — comprehensive tax reform.

“Let’s finally tackle comprehensive tax reform this session,” she said in her state of the state address, seizing on tax reform in the wake of the federal overhaul, like a number of other governors.

But while many governors and legislators are looking to revamp tax codes in a big way, the temptation is not universal. While most Republican governors are at least looking at lowering taxes, some GOP legislators say they are hesitant due to uncertainty about revenue forecasts for the new tax law.

Some Democrats want to fund their own priorities but also are holding back due to worries about underfunded pensions, cuts to federal government programs such as Medicaid, the federal-state health plan for low-income Americans, and the Children’s Health Insurance Program, and other concerns.

But the issue that will be uppermost on lawmakers’ minds this legislative year is how to deal with tax and budget changes.

“For years, there have been quite a few states that have talked about a desire to create a more neutral and more pro-growth tax code, but have been limited by revenue availability,” said Jared Walczak of the right-leaning Tax Foundation, a Washington, D.C.-based tax analysis group. Now, with the federal overhaul signed by President Donald Trump in December, “there is an opportunity for states to consider serious tax reform.”

A majority of states will see a revenue increase if they do nothing, but their taxpayers also will pay more. That’s because the new federal law eliminated many tax breaks, meaning federal taxes are assessed on more income. The federal tax code, however, tried to help taxpayers out by also increasing the standard deduction, lowering their tax liability. If states use the income line from the federal form as a starting point, but don’t adjust the deductions underneath, state residents would pay more. 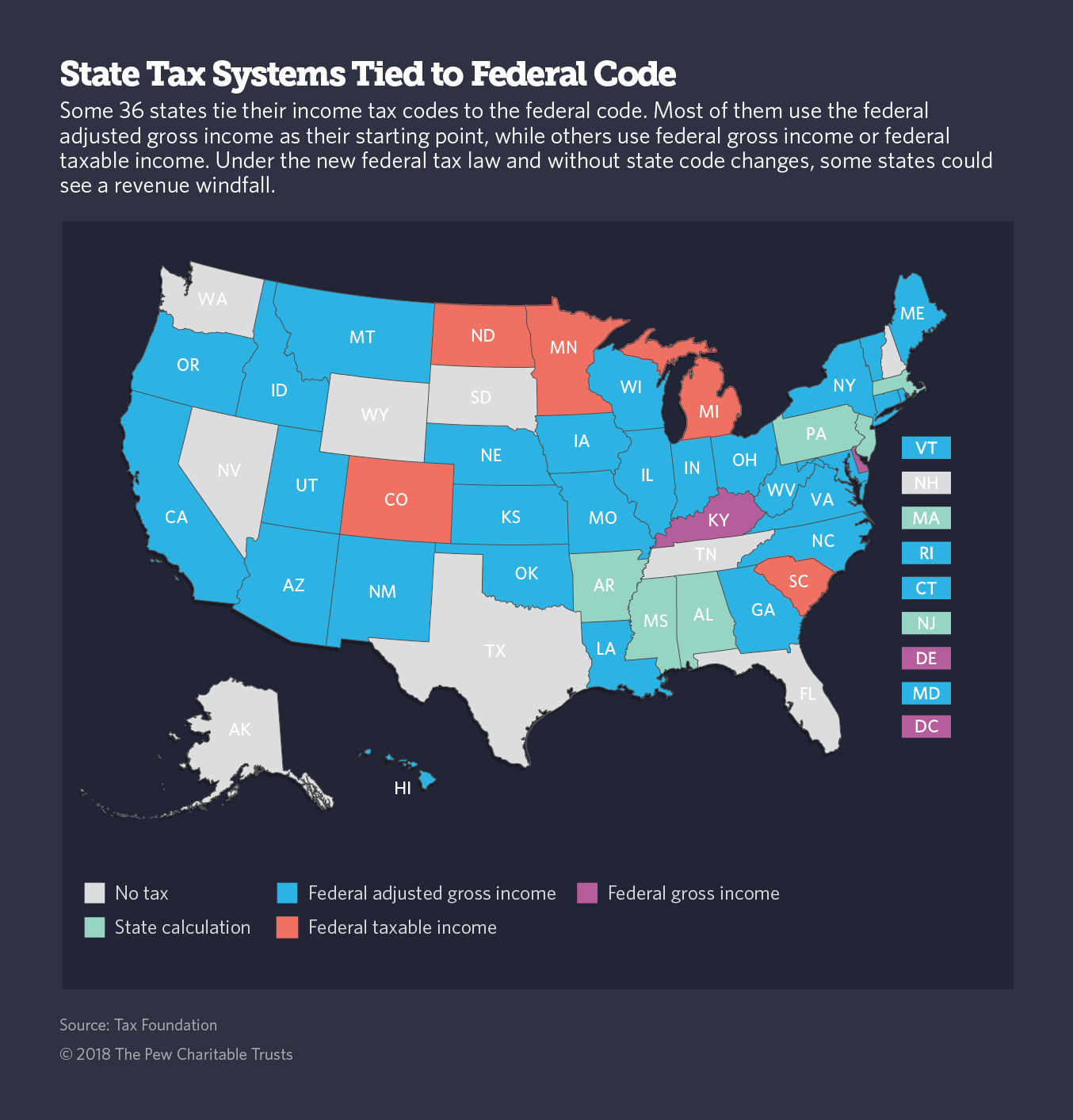 After the sweeping Reagan-era federal tax overhaul in 1986, many states that tied their state income taxes to the federal code changed their laws in 1987, in some cases due to a similar windfall or to align their tax brackets with the federal code. And just like federal tax laws, state codes have changed incrementally over the past three decades, so that neither resemble what they looked like in 1986. But sweeping tax overhauls in the states have been rare since then.

Kansas cut taxes drastically in 2012, counting on economic growth to make up the difference. But despite vast budget cuts, the state’s revenue never caught up, creating a roughly $300 million budget hole and prompting a backlash among residents and lawmakers.

North Carolina revamped its tax code in 2013, and, like the recent federal rewrite, lowered individual rates, cut corporate taxes, and doubled the individual standard deduction. Republicans leaders hailed the overhaul as the key to 300,000 new jobs in the state, but Democrats and liberals maintained that the job increases were due to a national wave of economic activity, not the state’s action.

This time around, in addition to wholesale rewrites, some states are weighing whether to use the newfound millions to augment their rainy day funds, give state taxpayers a break, or fund new or languishing priorities such as education, transportation and pensions.

In Colorado, Democratic Gov. John Hickenlooper has proposed increasing the state’s rainy day fund to 8 percent of the general fund, due to better-than-expected state revenue and an estimated $300 million boost from the federal rewrite. But some in the Legislature want the money for highway construction instead.

Meg Wiehe, deputy director of the Washington-based Institute on Taxation and Economic Policy, a left-leaning group, urged states to proceed cautiously, especially if they are looking at big, permanent, rate cuts. That’s because the federal rate changes and other modifications are temporary, and could disrupt states again when they expire in 2025.

Today, as 2018 sessions begin in statehouses across the country and with budgets at the top of the to-do list, tax writers and analysts say the windfall from the federal rewrite already is playing an outsized role in those discussions. But any lucky break also creates competing constituencies.

For about a year, for example, Utah lawmakers have discussed how to change state taxes, which have not been changed significantly since 2008. Greg Hughes, the Republican speaker of the Utah House, estimated the state stands to gain between $75 million and $150 million this year due to the federal tax changes, which has given the state’s comprehensive overhaul effort new impetus.

Hughes tried last year to go for what he called the “big lift” of comprehensive tax reform, but he was stymied. He thinks the extra revenue gives more momentum to his efforts in 2018. But Senate President Wayne Niederhauser, also a Republican, said he wanted to wait for deeper analysis of the impact of the tax overhaul from state financial officials.

Iowa stands to gain $106 million next year and $138 million in 2020 from the federal tax changes if nothing is done to the state tax code, according to Iowa’s Department of Revenue. That’s about 2 percent of the state’s $7.3 billion budget.

“Our goal is to give that money back to Iowans and to do so as part of a plan to take a comprehensive look at taxes in Iowa,” said Iowa Senate President Jack Whitver, a Republican.

Whitver and other Republicans argue that revamping the state tax code and lowering tax rates would result in economic growth. But even in the best of cases, that growth can take years to materialize, and, Whitver says, the windfall from Washington could help tide the state over during the adjustment.

Wiehe noted that Iowa has wanted to lower tax rates for a long time. “They haven’t been able to figure it out,” she said. “Now, it’s pretty convenient to have a couple hundred million dollars so they can do what they want.”

In Idaho, State Tax Commissioner Ken Roberts told the Legislature to expect a net gain of $97.4 million in revenue this year if no changes to the state tax code are enacted.

Gov. C.L. “Butch” Otter, a Republican, took a look at the estimated tax gain and pledged in his state of the state address this month to propose a plan that would blunt the increased levies on Idaho taxpayers. He said he would work to substantially retool the state tax code to conform with the federal one, but he left wiggle room to accept some of the new revenue for his priorities, which include beefing up the state’s reserves and putting funds into education and health care.

By leaving room for negotiation, Otter opened the door to a more complex rewrite of the state’s tax code, and Democrats jumped on Otter’s plan, calling for a refundable tax credit for larger families and an expansion of Medicaid.

In Michigan, Gov. Rick Snyder, a Republican, Jan. 8 called for an increase in the state’s personal exemption to offset the potential $1.5 billion in increased taxes that Michigan taxpayers would have to pay without action. That proposal opened the door to more comprehensive tax change proposals by both Republicans and Democrats.

“We are putting Michigan families first, by working to enact a simple and fair solution to fix the unintended consequences of the federal tax plan,” Snyder said in a statement, referring to the higher taxes the state will collect absent any tax law changes.

Snyder, a fiscal conservative, earlier had condemned the GOP tax plan as fiscally irresponsible because it adds to the federal deficit. But Republican members of the Michigan Legislature already are clamoring for deeper cuts to state taxes, beyond Snyder’s simple solution to lower taxes just enough to make up for the federal windfall.

Arlan Meekhof, the Senate majority leader, and a fellow Republican, said Snyder’s plan was merely a “good start. I think there’s more we can do to put people’s money back in their pockets,” he told the Detroit News. Michigan’s last big tax change was a cut in corporate taxes in 2011.

Any time there’s extra money around, competition is fierce. In Maryland, for example, Republican Gov. Larry Hogan has pledged to rewrite the state tax code to lower rates in an effort to blunt the $400 million in higher state taxes residents could otherwise expect.

But Democrats in the state Legislature, including Senate President Thomas V. Mike Miller Jr., say some of the money should be kept in reserve to cover the costs of CHIP, the federal health insurance program for low-income children, or Medicaid.

Miller even suggested the changes could be so sweeping and controversial that he would favor an extended session or special session to deal with it.