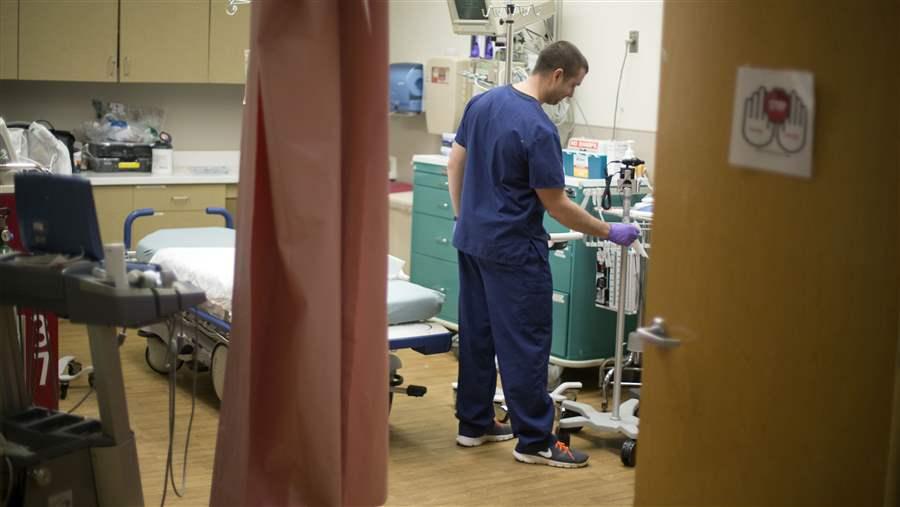 A paramedic cleans equipment in an exam room at Grady Memorial Hospital in Atlanta. Safety net hospitals such as Grady are facing substantial federal budget cuts, which may jeopardize the survival of some.

Editor's note: This story was updated January 16, 2017 to clarify that the U.S. Government Accountability Office testimony to Congress was that there are 21,554 340B hospital sites.

A double whammy of federal budget cuts might force many hospitals, particularly those that serve poor or rural communities, to scale back services or even shut their doors.

The $3.6 billion in cuts this year — $2 billion from a program that sends federal dollars to hospitals that serve a high percentage of Medicaid or uninsured patients, and $1.6 billion from a drug discount program — will have the greatest effect on so-called safety net hospitals that provide medical care for all comers, no matter their ability to pay.

The cuts are in addition to other losses of federal funds as a result of Congress’ failure to reauthorize spending in 2018 on other programs affecting many hospitals, including $1.5 billion to support community hospitals, a combined $370 million for the National Health Service Corps and Teaching Health Centers, both of which support rural hospitals, and $3 billion for the “Medicare extenders” program, which provides additional funding for isolated, low-volume hospitals and other rural hospitals.

“They are placing our already fragile health system in jeopardy,” said Danne Howard, executive vice president of the Alabama Hospital Association. “More than 90 percent of our rural hospitals are already operating in the red. When you add further cuts to that, you are creating an extreme risk to our continued operations.”

The cuts come at a time when many rural hospitals already are struggling to keep their doors open. Since 2010, 83 rural hospitals have closed across the United States, according to the National Rural Health Association. An additional 673 hospitals are considered at risk of closure. Many of those hospitals are in states that chose not to expand Medicaid, the federal-state health plan for low-income Americans, meaning that they treat uninsured patients with no ongoing federal and state reimbursement for the care they provide.

Officials at some rural hospitals say Medicare, the health plan for Americans 65 and older, doesn’t reimburse them adequately. “We deliver the same services as you’d get in big cities in New York and California but are paid significantly lower reimbursement,” said Glenn Sisk, CEO of the Coosa Valley Medical Center on the western edge of the Talladega National Forest in rural Alabama.

Starting Jan. 1, the Trump administration implemented a $1.6 billion cut to what is known as the 340B Drug Discount Program. Begun in 1992, the program requires drugmakers to offer deep discounts to safety net hospitals for certain drugs prescribed for Medicare patients. Those hospitals still receive full Medicare reimbursement for the drugs, but can keep the difference between the discounted price and the Medicare reimbursement to plow into enhanced services to their most vulnerable patients.

For example, Mission Health, a nonprofit safety net provider in western North Carolina, used its savings from the 340B program to ensure that discharged patients were taking their medicines appropriately and to create a medical education program to train medical students and residents in rural health. It also used 340B savings to help rural hospitals launch medical airlift systems and other emergency medical services and to enhance children’s services. Mission’s CEO, Ronald Paulus, testified to Congress in October that the 340B program also helped the health system provide financial assistance to patients with meager resources.

Over the years, the number of health facilities qualifying for the program has grown rapidly. Between 2001 and 2011, the number of 340B facilities roughly doubled, to about 16,500 sites, according to a study published in Health Affairs in 2014. The Medicare Payment Advisory Commission said in its 2016 report to Congress that there were 2,170 340B hospitals, many of which have multiple 340B sites. In testimony before Congress in July, the Government Accountability Office reported that there are now 21,554 340B hospital sites.

But as the numbers increased, so did complaints about how the program operated. According to the Health Affairs study, more and more of the hospitals that were gaining 340B status served communities with fewer lower-income patients than the earlier 340B hospitals.

The newer 340B hospitals, the study suggested, were using their 340B status not to help poorer communities, but to push into more affluent, profitable areas.

In its testimony last year, the GAO recommended tightening the requirements for gaining 340B status. The pharmaceutical industry, which loses money because of the discounts, also lobbied hard for more restrictions for qualifying as a 340B hospital.

But the Trump administration went further. In November, it announced the 27 percent cut to the 340B program. Money that once went to 340B hospitals will now be distributed far more broadly, to most hospitals.

In announcing the rule change, Seema Verma, the administrator of the Centers for Medicare and Medicaid Services, said the new policy would save patients as much as $320 million in out-of-pocket prescription drug costs in 2018. Critics of the rule change are skeptical about that, noting that most Medicare beneficiaries have supplemental insurance policies that already cover those costs.

Medicaid’s Disproportionate Share Hospital (DSH) program is facing even larger cuts. Created by Congress in 1981, the program is designed to compensate hospitals that provide a significant amount of medical care for which they don’t receive reimbursement. In 2012, there were 2,670 such hospitals, which represented 45 percent of all hospitals, according to the Medicaid and CHIP Payment and Access Commission, a nonpartisan agency that provides analysis to Congress.

In 2017, the federal allotment for DSH payments was $12 billion, with states contributing another $9.5 billion. The commission says those payments, in the aggregate, are the difference between whether disproportionate share hospitals operate in the black or not.

However, after the U.S. Supreme Court ruled in 2012 that states didn’t have to expand Medicaid, Congress repeatedly delayed planned reductions to the program. In 2017, however, Congress did not vote to postpone the cuts, and they took effect Oct. 1. Unless Congress steps in, the cut to federal DSH payments in 2018 will be $2 billion, with far larger federal reductions to follow.

Even states that expanded Medicaid under the Affordable Care Act will feel the reduction.

For example, New Jersey hospitals’ uncompensated care costs dropped by $216 million to $911 million in 2014 when the ACA took effect, according to the Medicaid and CHIP Payment and Access Commission. But the state’s hospitals will see their DSH allotment cut by more than that amount, by $321 million. (The commission looked at uncompensated care figures from 2014, the year many states expanded Medicaid under the Affordable Care Act.)

States that did not expand Medicaid did not experience as sharp a drop in uncompensated care, so the impact of the cuts will be even more profound. In Alabama, for example, the commission reported that uncompensated care costs fell by about $11 million after the ACA, but DSH payments to hospitals in the state will fall by $93 million in 2018.

At the 248-bed Coosa Valley Medical Center in Tennessee, where Sisk said about a quarter of the patients are on Medicaid, he anticipates that cuts to the two programs will cost his hospital between $550,000 and $650,000 this year. He said the hospital would do everything to keep the doors open, even if that meant cutting back on services or seeking another health care partner. He noted that Coosa Valley is the largest employer in the community, so its closure would have a devastating effect beyond loss of medical care. “This is,” he said, “an extremely serious situation for us.”

The situation is also serious for Erlanger Health System, a nonprofit that operates five hospitals in the Chattanooga, Tennessee, area. The CEO, Kevin Spiegel, said an expected $5 million reduction in 340B “will definitely impede our ability to care for the uninsured and underinsured.” The health system said it would have to start looking at cuts in services, such as programs to ensure discharged patients comply with instructions for their prescription drugs.

Other hospitals mentioned the possibility of cutting back on the number of social workers, follow-ups with patients after discharge, and transportation services to help poor patients get to medical appointments.

Jeremy Alexander, interim president and CEO at the 50-bed Fort Madison Community Hospital in the southeast corner of Iowa, said the loss of 340B money could mean that the hospital will have to stop offering chemotherapy. Patients would then be faced with an hour-and-a-half drive to Iowa City. “It’s hard to swallow,” he said.

Not all the affected hospitals are in rural areas. John Jurenko, vice president for government, community relations and planning for New York City Health and Hospitals, which calls itself the largest public health system in the country, said the DSH cut would cost the health system $330 million this year. That kind of cut, he said, would impair the system’s ability to treat 410,000 New Yorkers without health insurance. Unless Congress steps in to delay the cut, he said, New Yorkers could face tax increases to keep the system operating without cutbacks.

Not every state is facing such dire impacts from the cuts, however. In Louisiana, for example, Andrew Tuozzolo, chief of staff in the Department of Health, said the Medicaid expansion in 2016 vastly reduced the state’s amount of uncompensated care. “We’re not in favor of DSH cuts, but expansion really saved us from the impact of these cuts,” he said.