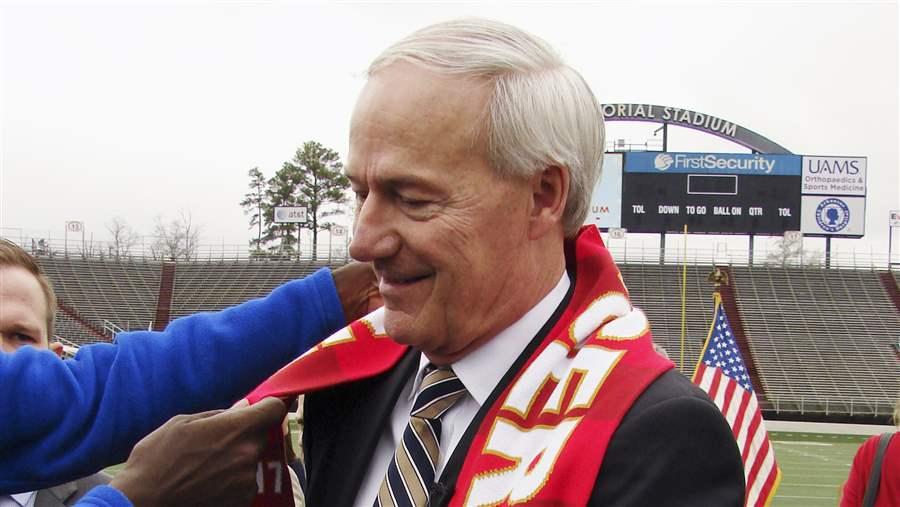 Arkansas Gov. Asa Hutchinson prepares to talk to reporters about bills in the Arkansas Legislature that would impose taxes on online purchases. The U.S. Supreme Court agreed to hear a case about online sales taxes.

The U.S. Supreme Court agreed Friday to decide whether states will be allowed to collect what could amount to billions of dollars in taxes from online retail sales.

The justices agreed to hear South Dakota v. Wayfair, Inc., in which the state  contends that a 1992 ruling prohibiting collection of sales taxes from any seller that does not have a physical location in the state is outdated.

States estimate they could collect $26 billion in sales taxes on products sold remotely — online and via mail order. Currently, taxes are not collected on most remote sales, though Amazon, the biggest online seller, has agreed to do so in many states.

The 2016 South Dakota law requires remote retailers to collect and remit sales tax in the state if they have more than 200 transactions or $100,000 in sales in the state. The state sued Wayfair Inc., Overstock.com Inc. and Newegg Inc. to try to force them to comply with the law. Other states have similarly tried to collect, but the efforts have been tied up in court for years.

In 2017, six states enacted laws or set tax rules that addressed the lack of tax on remote sales — Alabama, Indiana, North Dakota, Virginia, Tennessee and Wyoming. All but Virginia had Republican governors and majority GOP legislatures, which are not generally in favor of tax increases. But Main Street concerns about the tough competition from out-of-state sellers carried the day.