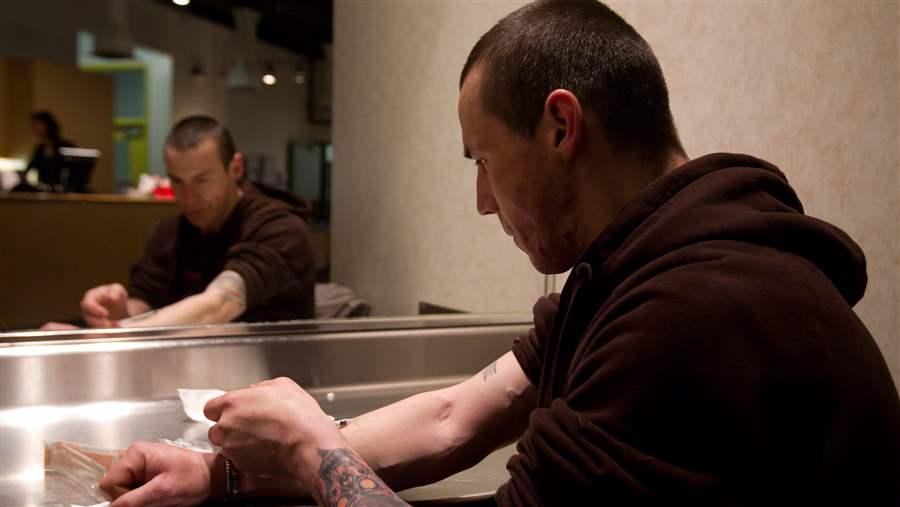 In this file photo, a man injects heroin he bought on the street at the Insite safe injection clinic in Vancouver, Canada. Insite is North America's first and only legal injection site.  A handful of U.S. cities and states are trying to develop similar facilities to curb opioid overdose deaths.

NEW YORK — In about one hundred locations across Canada, Europe and Australia, supervised drug injection facilities allow visitors to inject heroin and other drugs in a clean, well-lighted space under the watchful eye of trained personnel who can rescue them if they overdose.

Tens of thousands of drug users have visited the facilities, thousands have overdosed and, researchers say, no deaths have been reported. Studies show that a substantial number of drug users who visit safe injection sites end up in treatment, which is routinely offered to them. Research also has shown that the facilities help contain hepatitis C and HIV infections and are a cost-effective way to save lives.

The United States — with an overdose death rate that far exceeds that of any other country — has failed to open a single government-sanctioned facility.

This year, that may change.

Legislatures in California and Vermont are considering bills that would legalize and, in some cases, fund safe injection facilities. Seattle and surrounding King County have approved and budgeted for two such facilities. And advocates in Boston, Denver, New York, Philadelphia and San Francisco are pursuing similar initiatives.

Political momentum for sanctioned injection sites has been building in the United States over the past three years, advocates say. And this year, more state legislatures and local officials appear closer than ever to providing the needed government support.

Groups including the American Medical Association and some state medical societies have backed efforts to launch pilot injection sites. But those and other efforts have been stymied by widespread stigma against drug users and concerns about federal drug law enforcement.

As a result, drug users who do not have a safe place to live furtively inject drugs in parking lots, stairwells, public bathrooms and hidden corners of public parks. And with the increasing presence of the deadly synthetic drug fentanyl in the heroin supply, more of those users are dying.

New York City is no exception.

But in the Washington Heights neighborhood in the northern tip of Manhattan, word has spread about a place called the Corner Project, a drop-in syringe exchange center that provides clean needles, hot coffee, access to health and welfare services — and bathrooms.

Although not sanctioned by the city or state as a safe haven for drug use, it’s an open secret that Corner Project is a place where people can inject drugs in one of two bathrooms while a staff member waits outside the door — and rushes to rescue drug users if they don’t respond to a knock after three minutes.

“It really is just a bathroom. We don’t know that everyone who goes in will be injecting,” said Liz Evans, executive director of Corner Project and founder of Canada’s first safe injection site. “It’s our obligation as a public health facility to make sure nobody dies.”

Opponents of safe injection sites, including some police departments and prosecutors, point to the federal Controlled Substances Act and state laws prohibiting the possession and use of heroin and other drugs. They say sworn police officers and federal agents can’t be expected to ignore people who walk into an injection facility, knowing they likely have dope in their pockets.

And the U.S. attorney in Vermont, Christina E. Nolan, said a proposal in the state legislature to sanction safe injection facilities would violate federal laws that prohibit “maintaining a premises for the purpose of narcotics use.”

Many local officials also worry that allowing people to use drugs in a public facility would send a signal that drug use is acceptable.

Seattle and surrounding King County, Washington, have approved two facilities, but it has been difficult to find a place for them because officials in suburban towns outside Seattle have filed suits to block the facilities from their communities.

Similarly, Boston Mayor Martin Walsh, a Democrat, opposes a bill in the Massachusetts legislature that calls for creating multiple injection facilities in the city.

But despite high-level opposition, advocates for the services say it is only a matter of time before some city, county or state sanctions the first injection site. After that, they predict the results will be so positive that the proven public health approach to reducing drug overdose deaths will spread rapidly.

“Whoever steps up first, despite the controversy, will be recognized as a leader on this in the long term,”said Daniel Raymond, policy director of the Harm Reduction Coalition, a national group that supports safe injection and other public health strategies aimed at saving lives and improving the health of drug users. 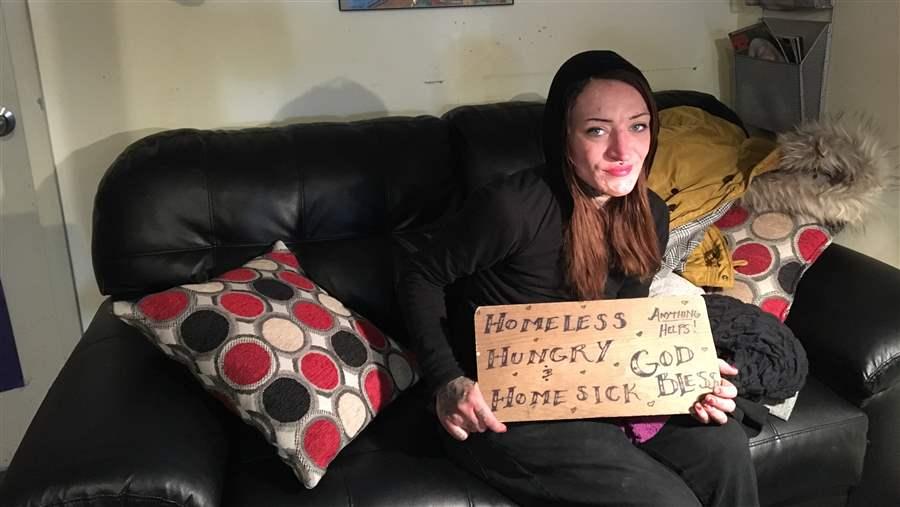 Alison Darveaux, 34, takes a break from the cold at Washington Heights Corner Project, a needle exchange facility in the northern tip of Manhattan. She and hundreds of other injection drug users visit Corner Project every day for clean needles, hot coffee and to inject drugs in the facility's bathrooms.

Throughout the day, a steady procession of men and women of all ages checked in at the front desk and began peeling off layers of clothing, pouring cups of coffee and finding spots to rest and talk with fellow drug users.

Others headed straight to the back of the large open space where the facility’s two bathrooms are located. Before using one of them, visitors must sign in with a staff member who stands outside the door and sets a timer. Every three minutes, he checks on visitors with a knock on the door to make sure they haven’t overdosed.

If there’s no answer or he hears the thud of a body collapsing on the floor, he quickly unlocks the door, calls 911 and administers the opioid antidote naloxone. Staffers here say they have rescued overdose victims hundreds of times since Corner Project began monitoring its bathrooms nine years ago. So far, no one has died.

Alison Darveaux, 34, comes here every day for the coffee and to use the bathroom to brush her teeth, clean up and inject heroin. She’s also been working with one of the center’s social workers to get a photo ID so she can qualify for Medicaid and sign up for a local methadone treatment program.

A Florida native, Darveaux hitched a ride with a trucker and got dropped off here about six months ago. She spends her nights outside the George Washington Bridge bus terminal, and says her life right now is about as bad as it’s ever been. “But it would be much worse without Corner Project,” she said. “This place has saved my life.”

Other visitors there last week -- most couch surfing or homeless -- said they felt the same way. In the early years, about 300 new people checked into Corner Project annually. But two years ago, the numbers started growing. Last year, at least 600 new people signed in and even more are expected this year.

The increase is partly because of greater neighborhood outreach and word-of-mouth awareness over time, Evans said. But it’s also a result of the increasing threat of deadly fentanyl in the heroin supply.

More than 64,000 people in America died of drug overdoses in 2016, a 21 percent increase over 2015, primarily due to the growing presence of the powerful synthetic drug fentanyl.

In New York, Democratic assemblywoman Linda B. Rosenthal said she plans to refile a bill she offered last year that would authorize Corner Project and a handful of other existing syringe exchanges in the state to add supervised injection services to their existing facilities, which would allow users to inject in the open rather than behind a bathroom door.

In New York City, the city council in 2016 funded a study of the feasibility of creating multiple injection sites in the city. Slated for release in February, the study is widely expected to recommend development of a handful of injection sites across the city. If approved, the sites would be reviewed for their effectiveness with an eye to wider adoption. 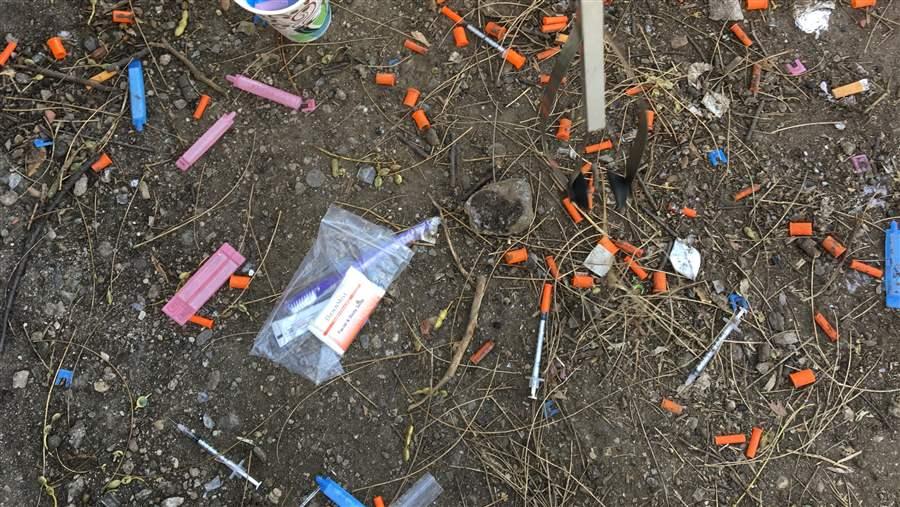 Used needles, syringes, and drug packets litter parks and walkways in upper Manhattan.  Supervised injection facilities in Canada, Europe and Australia have been found to reduce the number of discarded needles and syringes in surrounding neighborhoods.

Corner Project isn’t the only unofficial safe injection site in the United States. Another syringe exchange center in the city, VOCAL-NY in Brooklyn, also monitors its bathrooms while users inject drugs. And a site run by a physician in Boston allows drug users to visit after they’ve injected drugs to be watched by health professionals who can rescue them if they overdose.

Those are just the ones that have gotten publicity, said Alex H. Kral, an epidemiologist and director of the Urban Health Program at North Carolina-based research organization RTI International who studies harm reduction. There are dozens of syringe exchange centers like Corner Project throughout the country where visitors inject in the bathrooms and the staff stands ready to rescue them if they overdose, he said. “Most don’t want to be identified.”

But far more injection bathrooms are located in fast food restaurants and libraries, Kral said, noting that to varying degrees, the management stocks naloxone and trains staff to rescue people who overdose.

Kral says just one truly supervised injection facility exists in the United States, where visitors can inject drugs in the open instead of in a bathroom. Created in September 2014, its location remains undisclosed to protect visitors and management from potential criminal charges.

The clandestine facility allows visitors to use drugs in open booths similar to those in Australia, Canada and Europe, where trained personnel can observe them throughout the injection process. Medical professionals also observe visitors in a “chill room” after they have injected to make sure they have no delayed adverse effects.

Kral and a coauthor, the only researchers who have access to the facility, offered limited data on its results in a recent report: No one who has overdosed at the facility has died and many have been able to get into treatment and sign up for social services.

In Vancouver, at Canada’s first supervised injection facility, Insite, the staff says it saved more than 2,700 lives and referred at least 3,500 to addiction treatment in the first decade after it opened in 2003.

Researchers also found that Insite was responsible for a 35 percent decline in overdoses in the surrounding neighborhood and a 9 percent reduction in the city overall. One study pegged the resulting health care cost savings to the city at $1.8 million per year.

At Corner Project, the staff says it rescued 65 people from drug overdoses last year and referred 150 to treatment. This year, the numbers are expected to be higher. But not as high as they could be if the facility were sanctioned, Evans said.

By sanctioning safe injection sites, the city would not be condoning drug use, Evans said. It would be letting drug users know: “We see you as a human being, and we want to help.”