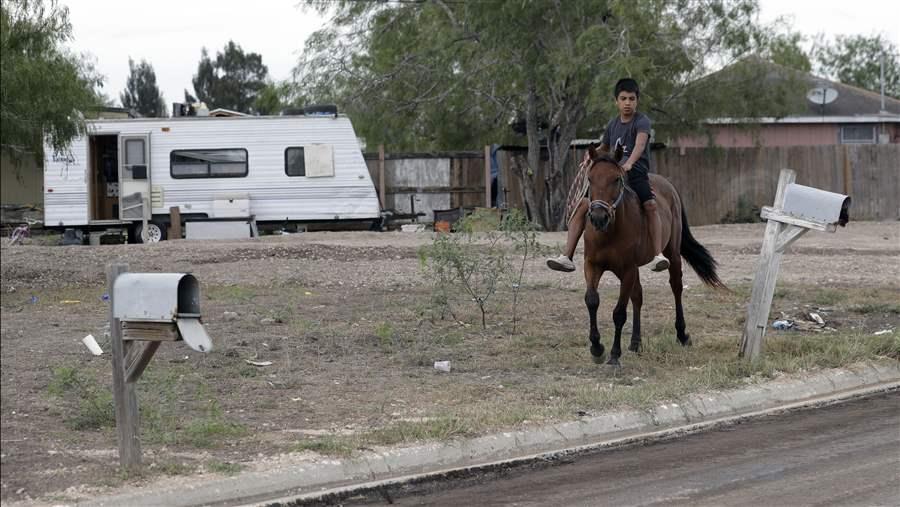 A boy rides a horse through a colonia near Alamo, Texas. The makeshift settlements are among the areas where counting residents is a challenge.

Amid fears that a lack of money will prevent an accurate count, states are gearing up to identify the people the 2020 U.S. Census is most likely to miss, from trailer-park residents in New York to people living in shantytowns in New Mexico.

Residents of isolated rural areas, immigrants, and people who just don’t trust the government are among those who tend to be undercounted in the decennial census. The apportionment of U.S. House seats and nearly $590 billion in annual federal funding depend on the count, so state and local officials have a keen interest in making sure their residents don’t fall through the cracks.

The current task for state and local officials is to verify the Census Bureau’s residential address list: Starting in February, the bureau will turn over address lists to states and local governments for double-checking that must be finished within 120 days.

Large databases such as property tax rolls and 911 records can help local officials identify errors in the bureau’s information. But local sources may be most effective in correcting erroneous information. In New Mexico, for example, some small towns have used holiday turkey distribution lists to prove to census officials that new addresses are real.

Next year, states and cities can help ensure an accurate census by publicizing the upcoming count and encouraging people to participate, especially in areas where undercounts are most likely. The census does not help pay for state and local efforts to encourage participation or reassure people about the confidentiality of their responses.

These efforts can take many forms: In 2010, Maryland slapped census decals on state vehicles, Montana asked localities to slip reminders into residential water bills and Riverside County, California, promoted the census at its annual Tamale Festival.

Federal census takers, paid with federal money, are the only authorized counters, so states and localities will have a limited role once the actual counting begins in 2020. However, for the first time, people will be able to fill out census forms online, and state and local officials can help boost response rates by providing internet access, at libraries and other sites, to people who don’t have it at home.

The Census Bureau recently requested $15.6 billion for the 2020 count. But that figure is $3.3 billion more than a 2015 estimate, and the Government Accountability Office and the Department of Commerce Office of the Inspector General have questioned the accuracy and reliability of the bureau’s estimates. Meanwhile, some census experts have warned that Congress is underfunding the count.

The cost of counting each housing unit has risen sharply over the last several decades, even as return of census questionnaires by mail has declined. The lower response rate leads to higher costs, since it is expensive for bureau field workers to follow up with non-respondents.

Census officials hope that the shift to online responses and new strategies such as using aerial photography to inspect new housing developments will save money. But the changes are untested.

“This will be the first high-tech census,” said Terri Ann Lowenthal, former staff director of the U.S. House panel that oversees the census. “Nobody’s arguing with the need to automate in this day and age. There will be new economies of scale but there will be new risks as well.”

Robert Rhatigan, associate director of Geospatial and Population Studies at the University of New Mexico, said the financial uncertainty means states will have to pick up some of the slack. Republican Gov. Susana Martinez tapped Rhatigan to lead the address checks in New Mexico.

“What we’re realizing now with these new funding concerns is that we need to do more,” he said. “We can’t depend on the federal government to do everything it did in the past.”

Rhatigan said he is waiting for the New Mexico Legislature to provide the $300,000 that would be required to duplicate the state’s 2010 address check. New Mexico is honeycombed with areas deemed hard to count, such as Navajo reservations and the shantytowns near the Mexican border known as colonias.

Like other states, New Mexico plans to digitally scan census address lists for missing homes, based on state construction records and other data, then alert local cities for help in documenting the new residences. Rhatigan said he will need a dozen graduate students to help with that work.

“I should be hiring and training people right now,” he said.

In California, the 2010 census missed an estimated 27 percent of the state’s “unusual” housing units — basements, garages and the like — which tend to be occupied by recent immigrants and the poor. To ensure a more accurate count in 2020, the state has budgeted $10 million to subsidize local efforts to uncover missing addresses.

California officials fear President Donald Trump’s crackdown on illegal immigration may make it harder to get an accurate tally of immigrants. Even immigrants who are here legally may balk at participating in the census if they live with relatives or friends who are undocumented. For the same reason, many census experts have warned against reinstating a citizenship question, which was on the so-called long-form version of the census that was dropped after 2000.

Three-quarters of California’s municipalities have signed up to help with address accuracy, an improvement from about 55 percent a decade ago, said Walter Schwarm, research manager at the state’s Demographic Research Unit.

“There’s a sense that more people are living in unusual housing situations because of record high housing prices and a shortage of rentals,” Schwarm said.

Other states are also allocating money to support the double-checking of census records, albeit in much smaller amounts. Massachusetts and Minnesota, for example, have each set aside $190,000, and Michigan has devoted two full-time jobs to its effort.

North Carolina and Virginia are among the other states that are considering spending state money to help verify addresses, said Todd Graham, chair of the Census State Data Centers network, which polled states last year on their readiness for the count.

In New York, where state lawmakers have not allocated any money for address checks, Cornell University’s Program on Applied Demographics has set up a computer system called NYBBLES to enable local officials to compare census address lists to a variety of state data and imagery.

But Graham cautioned that state and local officials will not have the resources to make up for serious federal shortfalls.

“There’s an orders of magnitude difference between what states are able to do and what the Census Bureau needs to do,” he said. “Our members of Congress should be on top of this and appropriating the needed resources.”