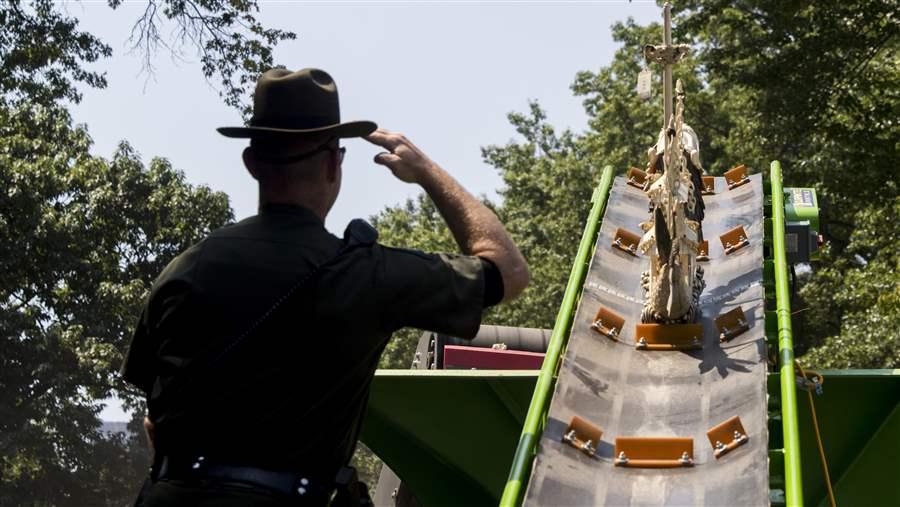 A New York State Environmental Conservation officer salutes as an ivory sculpture rolls into a crusher. The state is one of six that have enacted bans on the sale of African elephant ivory.

And when the Trump administration said in November that it was rolling back a ban on imports of elephant hunt trophies from two African countries, Powers disagreed. He doesn’t support hunting.

But for the past few years, Powers, a fine art and antiques dealer in New York, said politics have made him some strange bedfellows: advocates for the National Rifle Association.

As president of the Antiques Dealers’ Association of America, Powers has been fighting alongside the powerful gun lobby against proposed state legislation that would impose full bans on sales of elephant ivory within state borders. Members of the two groups collect and sell dinnerware, figurines, furniture, musical instruments, knives — and guns — all of which contain one thing: ivory.

The legislation — which has been enacted in six states so far — would close what animal welfare activists say are loopholes in the federal restrictions on African elephant ivory imports and sales. Making the changes, they say, would help shut down the market and put an end to the illegal poaching of African elephants, which has caused their population to dwindle.

The number of African elephants, which are listed as threatened under the Endangered Species Act, fell from nearly half a million in 2007 to about 352,000 in 2014, according to estimates from the Great Elephant Census, a survey funded by conservation and wildlife organizations.

The Obama administration in 2016 implemented a near-total ban on commercial trade of African elephant ivory. The ban prohibits importation of most ivory into the United States and ivory sales across state lines, but doesn’t apply to ivory sales within state borders. But it includes exemptions, such as for antiques that are more than 100 years old and items with small amounts of ivory, such as older pianos and other musical instruments with ivory inlays.

These exceptions aren’t enough, according to some animal welfare activists who say any legal market for ivory can both conceal illegal sales and increase demand. Jen Samuel, founder and president of a national advocacy group called Elephants DC, which has helped lead the movement to enact the laws, said shutting down the market entirely is critical to saving the elephants.

“If we in the U.S. continue to allow some ivory trade, we are just perpetuating the need for another elephant to be killed,” Samuel said.

Those opposed to the state laws, such as Powers, say the restrictions won’t save elephants. Opponents say what the laws will do, though, is hurt collectors by stripping the value of their ivory and items with ivory components.

“It’s easy for politicians to attach their name to something that on a superficial level sounds like a no-brainer,” Powers said. “It makes everyone feel and sound good if they are helping elephants. I don’t think that they are. I think they are hurting businesses.”

In part because China has the largest market for ivory, animal welfare activists have focused on enacting bans in areas with major trade ports and large Asian populations. Since 2014, bans have been enacted in California, Hawaii, New Jersey, New York, Oregon and Washington.

Peter LaFontaine, campaigns manager for the International Fund for Animal Welfare, said advocates hope to lock down certain regions of the country, such as the Northeast Corridor, so the U.S. market doesn’t jump across state lines. The organization has advocated for a ban in Massachusetts and will continue to push for a ban there this year, he said.

“We are trying to avoid the whack-a-mole effect, where if you ban sales in New York, it could pop up in a neighboring state,” he said.

Animal welfare activists say that any legal market for ivory, even for antiques, causes the illegal market to grow. The presence of a legal market helps to conceal the illegal actions of smugglers and dealers, according to a 2016 study by the National Bureau of Economic Research.

It’s hard to tell the age of ivory, and easy to make new ivory look old. People stain, chip and crack it, a process known as fake antiquing, said Elly Pepper, a deputy director at the Natural Resources Defense Council, which has advocated for state bans.

In the District of Columbia, activists say the ivory market is thriving in certain neighborhoods, such as Georgetown. D.C. Councilwoman Mary Cheh proposed legislation to ban ivory sales, which she said will have its first hearing in the spring. The legislation would not apply to ivory inherited through an estate or to antiques or musical instruments made with less than 20 percent ivory.

By drying up the market in D.C., Cheh said the city will be doing all it can to stop poaching.

“I wish I was a game warden in Africa, where I could stop this from happening,” she said. “But I’m stuck here in Washington, where I can only work on this end of the trade.”

While full bans on elephant ivory sales were proposed in many states, only New Jersey’s law bans the sale of all ivory, with exceptions only for educational or scientific purposes. The other laws have exceptions similar to those in the federal ban, often including for antiques more than 100 years old, musical instruments and items with small components of ivory.

State bans that have been enacted also apply to rhinoceros horn, and sometimes other animal products.

But even though the bans often have exceptions for antiques, antiques dealers such as Powers say the laws have still hurt the ivory market. Many antiques are missing documentation showing their age, and without documentation, the ivory can’t legally be sold in states with bans.

In New York, where Powers lives, the law enacted in 2014 has an exception for antiques. Still, the law has deterred him from buying ivory pieces, he said. A friend and fellow dealer who specializes in portrait miniatures, which often contain ivory, has seen her entire ivory collection devalued, Powers said.

And that will happen to others too, he predicted. Personal collections of ivory in the U.S. are valued at $11.9 billion, according to a recent report by the International Development Group, an economic development consulting firm.

State bans may also shift the market to other states, online or further underground. A recent study supported by the World Wildlife Fund and the International Fund for Animal Welfare found that markets have shrunk in California and New York, and potentially moved to other places such as Washington, D.C., Nevada and Florida. 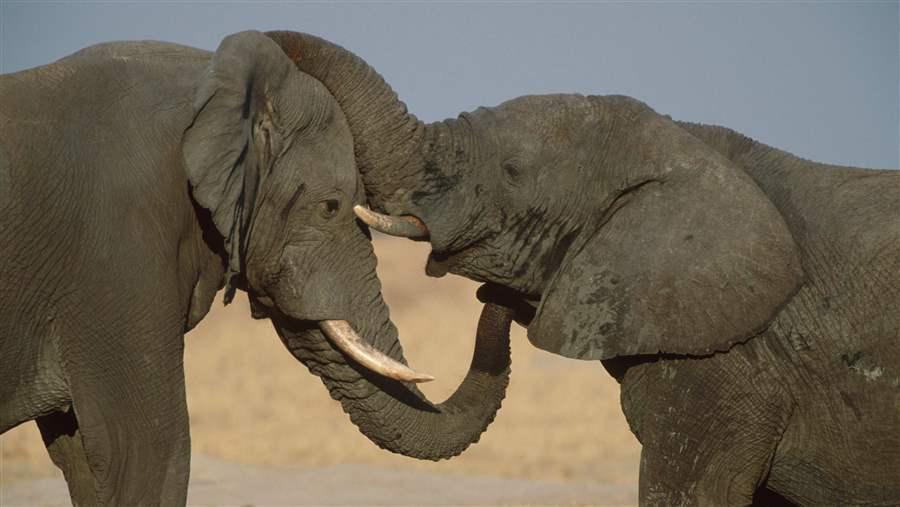 Alongside the antiques dealers’ association and the NRA is a Pennsylvania-based advocacy group called the Elephant Protection Association, which was established to fight against ivory bans.

The association is funded mostly through independent collectors and dealers, though it also has received donations from the antiques dealers’ association, said co-founder Robert Mitchell. It also uses NRA contacts to push for the bills in statehouses, he said.

While the National Rifle Association often focuses on advocating for the rights of hunters, it says it opposes the state and federal bans because it wants to protect the value and sale of historic guns, many of which have ivory inlaid in handles, according to its website. The association did not return a request for comment regarding its advocacy work on the topic.

The Elephant Protection Association wants to “bring truth to a lot of things that are misrepresented” about legal ivory’s relationship with the African elephant population, Mitchell said. The group says state bans will not stop illegal activity.

Among the misconceptions, he said, is the extent of the U.S. involvement in the illegal ivory trade. Mitchell cited a 2012 fact sheet from the U.S. Fish and Wildlife Service that says the ivory market in the United States is small. (A more recent Fish and Wildlife Service fact sheet, from 2016, when the federal ban was implemented, calls the United States a significant consumer and trader of illegal ivory.)

The nonprofit was founded by Mitchell; Doug Bandow, a senior fellow at the libertarian Cato Institute; Sandra Brady, an Ohio-based scrimshaw artist; and Daniel Stiles, an independent ivory trade consultant based in Kenya whose op-eds have appeared in The New York Times and National Geographic.

During a committee hearing for an ivory ban bill in Pennsylvania last year, state Rep. Tarah Toohil, a Republican, asked Mitchell about the group’s background.

“It just seems, after your testimony,” Toohil said, “that the name Elephant Protection Association is a little bit of a misnomer because what you are doing is the opposite.”

The Pennsylvania bill failed, but it’s being reintroduced this year.

Opposition from antiques dealers, the Elephant Protection Association and the NRA has blocked proposed ivory bans in many states, Samuel said. While a few years ago bills were proposed in at least half the states, in many states the effort has died down.

The Natural Resources Defense Council wanted to see the laws enacted in the three states with the largest ivory markets — California, Hawaii and New York — and after this was done the group is now backing off from the movement, Pepper said.

The International Fund for Animal Welfare will continue to advocate for a ban in Massachusetts, but now that the major markets are covered by bans, the group is more focused on making sure existing laws are successfully enforced, LaFontaine said.

But while other groups are backing down, Samuel of Elephants DC said her group plans to continue to advocate for bills in many states this year, including Illinois, Pennsylvania and Vermont.