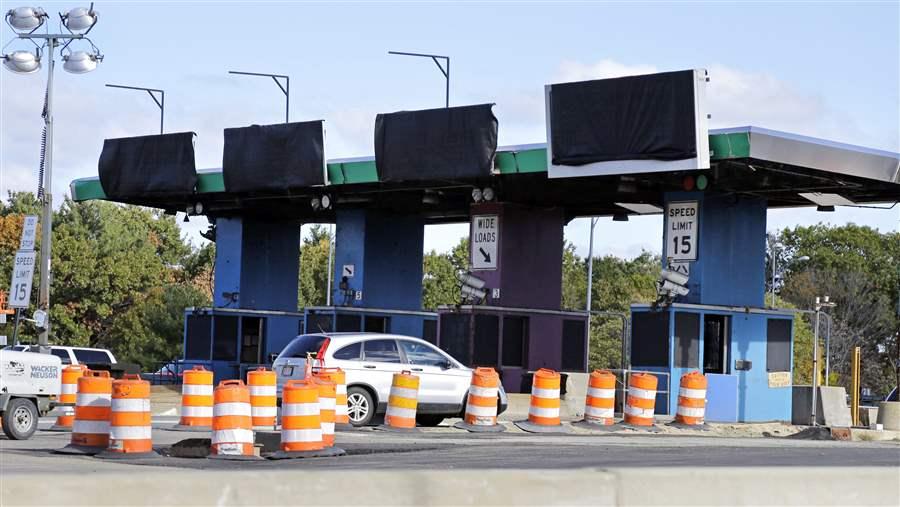 All-electronic tolling goes into place on the Massachusetts Turnpike. States are turning to tolls to compensate for less revenue from the gas tax and to ease congestion.

Get ready, drivers. With gas tax revenue stagnant and transportation funds scarce, states are turning to toll roads in 2018 to fill treasuries and manage traffic — despite outrage from motorists and questions about the efficiency of tolls.

The full list of new tolls is hard to track, but at least a half-dozen states from Florida to Colorado are slapping tolls on roads that used to be free or building toll-only lanes this year, and many more are expected to do so next year. It all shows how, despite the nation’s relatively robust economy, even the most basic state services — providing roadways, bridges and tunnels — are still being squeezed.

With infrastructure crumbling, budgets teetering on the edge of being in the red in many states, and the growing popularity of fuel-efficient cars, which means gas taxes generate less revenue than they used to, officials are looking to tolls. Giving a boost to the efforts, President Donald Trump’s initial infrastructure proposal also called for widespread use of tolling on interstate highways, which now are limited by federal regulations to certain stretches of road.

Bill Cramer of the International Bridge, Tunnel and Turnpike Association said the lack of funding from gas taxes is “100 percent” of the reason tolls are being imposed or going up. “Local governments are seeing this as a viable and useful option,” Cramer said. “It pays for the road, provides a steady stream of revenue to maintain that road at high quality and safety. And they have been very reluctant to raise the gas tax that would fund those roads.”

Nineteen states have waited a decade or more since last increasing their gas tax rates. Another 13 states have gone at least two decades, and three states — Alaska, Oklahoma and Mississippi — have not increased their gas tax rates since the 1980s, according to the Institute on Taxation and Economic Policy, a progressive think tank that keeps track of fuel taxes. The 18.4-cents-a-gallon federal gas tax, which also helps pay for roads, has not been raised since 1993.

“The money for the roads has to come from somewhere,” said Carl Davis, the research director for the institute. “In some cases, tolls are the path of least resistance.”

And for states that have chosen to raise fuel taxes in the past few years, it’s arguably harder for lawmakers to go back to that well again so soon, again making tolls attractive. Even the higher gas taxes in many states are insufficient to address infrastructure needs.

Florida, for example, indexes its gas tax to inflation, so it goes up a minuscule amount every year. Last year it went up one-tenth of one percent, to 36.59 cents a gallon, including local taxes. The last general gas tax increase there was enacted in 1990.

This year, the state will open two new toll roads in the Jacksonville area: express lanes along I-295, and State Road 23, known as the First Coast Expressway, which will extend south from Jacksonville into suburban Clay County.

The hit may be especially painful to some Jacksonville commuters — 70 percent of workers in Clay County — who are used to taking State Road 23 toll-free. Come spring, motorists will be charged anywhere from 20 cents for the cheapest leg of the trip to $2.20 if they drive all five exits (about 17 miles).

Hampton Ray, public information officer for the Florida Department of Transportation, said using the toll road will cut commutes by 10 to 15 minutes.

Florida state Sen. Dennis Baxley, a Republican member of the transportation committee, said that in his state “we need to look at all the tools in the toolbox” for highway funds, including tolls. Baxley, who has been in the Legislature since 2000, said there has been no impetus for a general gas tax hike in that time, and that tolling is one way to gain revenue.

He said that particularly in Florida, a state with a lot of tourists, tolls “allow our visitors to help us pay for the roads they need while they are here.” Baxley represents a district just north of Orlando, a tourist mecca, where toll roads are also used.

Baxley said, however, that non-toll roads should be available for “working people for whom this will be a sizable cost.”

Rhode Island increased gas taxes by a penny, up to 34 cents a gallon, three years ago, and will impose new truck tolls in the spring. In Texas, a state that hasn’t raised gas taxes for a quarter-century, the North Texas Tollway Authority in the Dallas region will begin operation of the 360 Tollway, a 9.7-mile toll road. It will have four lanes, two in each direction. 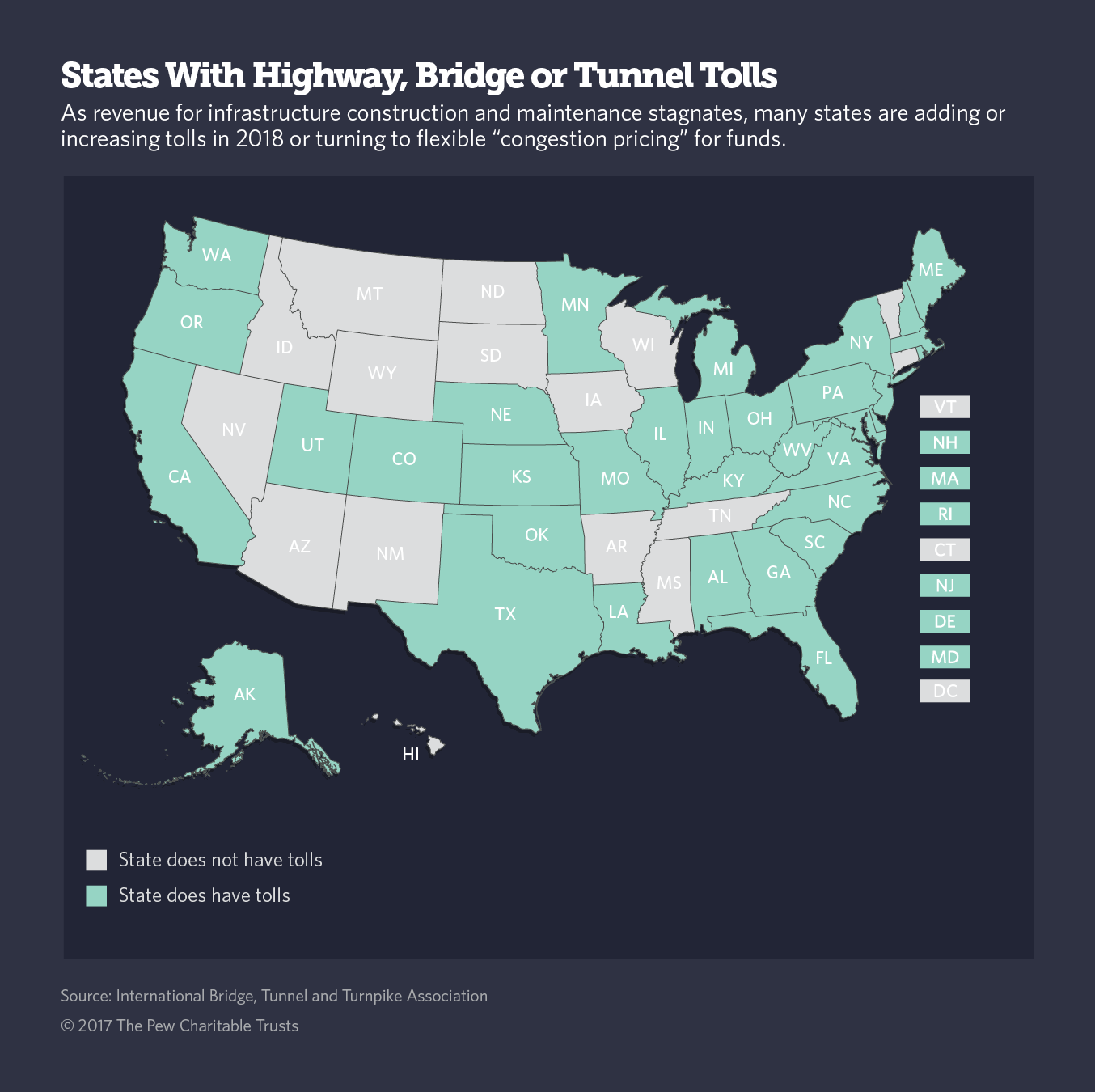 Crowded roads make “congestion pricing” — varying the tolls to adjust to traffic conditions — attractive to affluent drivers in a hurry in some parts of the country. But very high tolls may lead to drivers choosing other roads.

Virginia imposed congestion pricing tolls late last year outside Washington, D.C., on I-66, in the wake of tolls in recent years on some lanes of I-495, I-95 and I-395, bringing howls from drivers who paid upward of $40 for a 10-mile ride at the height of rush hour.

Oregon is set to add congestion pricing on highways running through Portland later this year. And legislators in seven states already have filed bills for the 2018 sessions to impose more tolls, including the congestion pricing option. There may be still more tolls to come; many are governed by local authorities that don’t need state approval.

In Seattle, talks are starting about how to charge tolls on the State Highway 99 tunnel under its downtown. The tolls are scheduled to go into effect this year, but a long ramp-up period is expected once the state transportation commission settles on the fees. Proposals include tolls that would vary during the day, from $1 overnight to a top rate of $2.50 for an afternoon trip.

Electronic tolling has made collecting variable tolls faster and easier, with drivers often unaware of how much the transponder in their car is charging them as they whisk through high-speed toll lanes. The bill comes later. 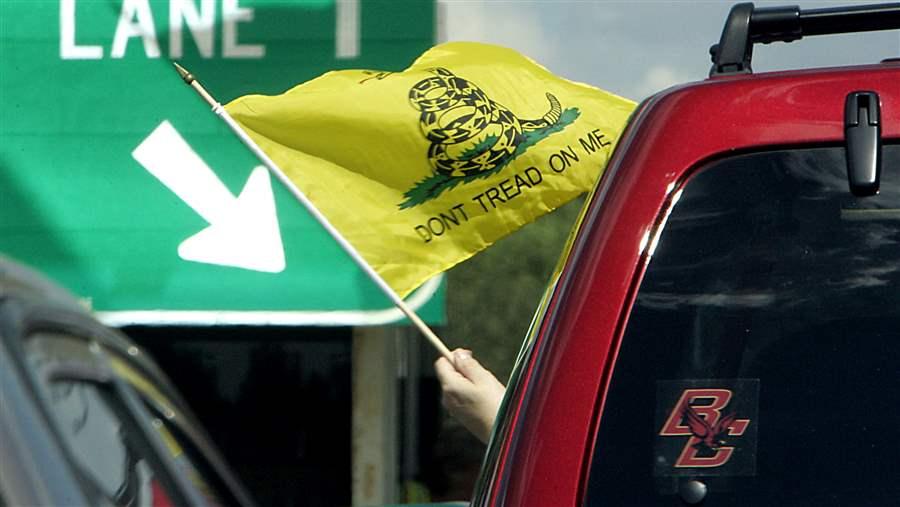 A driver protests a toll in Merrimack, New Hampshire.

A report by the International Bridge, Tunnel and Turnpike Association showed the number of trips taken by drivers on tolls roads increased 14 percent, from 5 billion trips in 2011 to 5.7 billion in 2015. The association also noted a 20 percent increase in electronic tolling over that time period. The Federal Highway Administration, in a separate report, found a 9 percent increase in overall toll road mileage within the United States, from 5,400 miles in 2011 to 5,900 miles as of 2013.

Stephanie Kane, spokeswoman for the Alliance for Toll-Free Interstates, a consortium of trucking, transportation and consumer groups that opposes tolls, said nationwide, tolls go up on average 3.2 percent a year for ordinary vehicles and 3.6 percent for commercial vehicles. She calls them the “worst funding mechanism” for roads. “Once tolls are built, their price only goes up,” Kane said. She noted that tolls on the 514-mile Pennsylvania Turnpike, which opened in 1940 as the first long-distance limited-access highway in the nation, have gone up annually for nearly a decade.

“The thing about tolls is, they are inefficient,” she said, pointing to a Congressional Research Service report that said highway toll collection costs 8 to 11 percent of the amount collected, even with electronic tolling, which is more efficient than cash. Collecting the gas tax costs about a penny of every dollar it brings in.

Tolls usually are controversial. The new Jacksonville-area tolls in Florida followed a community information drive throughout 2017 in which the state Department of Transportation held more than a hundred meetings, presentations or outreach events so that no one would be surprised by the new fees, said Ray, the agency spokesman.

In cash-strapped Connecticut, lawmakers are considering reinstating tolls on roads that were scrapped in the late 1980s. A poll of Connecticut residents in late 2017 by Sacred Heart University, in Fairfield, found 56 percent of those surveyed supported reinstating tolls to help the state out of its budget crisis. More of those surveyed, 71 percent, supported legalizing and taxing marijuana.

So far, Connecticut Gov. Dannel Malloy, a Democrat, has been silent on whether he will propose tolls in his new state budget, which is due to the Legislature in February.