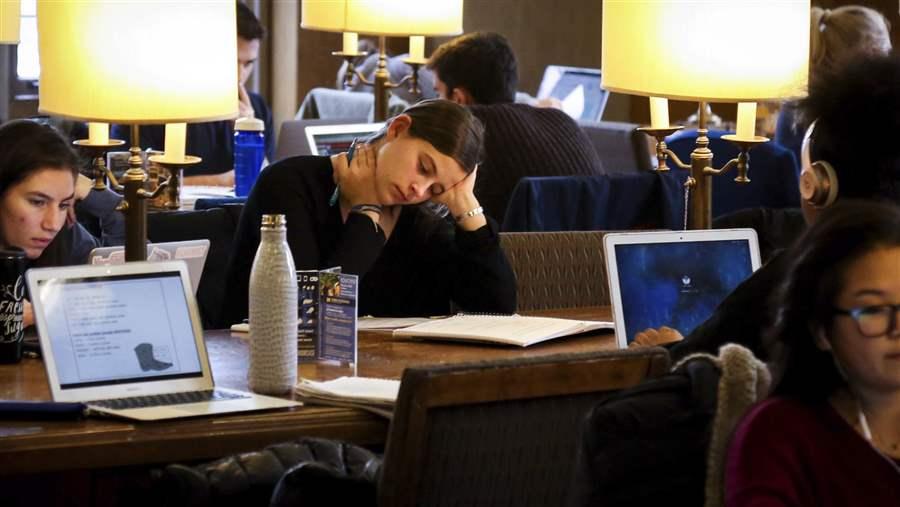 Students at the University of Michigan. Kalamazoo Promise, which has sparked a free tuition trend, covers four years of tuition at any public college or university in Michigan or at 15 private colleges in the state.

To churn out more workers with marketable skills, an increasing number of states are offering residents free tuition to community colleges and technical schools.

The move also is a reaction to fast-rising tuition costs — increases that stem, in part, from states reducing their financial support of public colleges and universities.

Morley Winograd, president of the Campaign for Free College Tuition, a Seattle-based nonprofit, described the movement as “the fastest-growing policy idea in the country” — one with bipartisan support.

“Everybody’s got cheap dirt — but do you have skilled workers?” Winograd said. “That’s the question states face as they recruit new industry.”

But the free tuition push hasn’t produced an economic bonanza for any of the pioneering cities—at least not yet — and some states have struggled to come up with the money to keep their end of the bargain.

In the past two years, 12 states have enacted legislation to join them. The state rush to offer free tuition began with Tennessee in 2015, but other states quickly followed. Arkansas, Hawaii, Indiana, Kentucky, Minnesota, New York, Oregon and Rhode Island have started programs, and Nevada plans to launch one this year. California and Montana last year enacted legislation to create programs but have yet to appropriate funds.

Free tuition plans typically promise students a free ride if they meet certain requirements, such as maintaining a certain GPA. Most plans only pay for tuition, so students must cover fees, books and other costs.

Most of the programs are “last dollar,” which means a student must obtain and use federal aid, such as Pell Grants or other scholarships, before the program kicks in to cover the rest.

Some states, such as Arkansas and Kentucky, limit their programs to students in selected fields. Arkansas only awards grants to students focusing on science, technology, engineering, math and other subjects employers most value. This year, Work Ready Kentucky is limiting aid to students studying health care, transportation and logistics, advanced manufacturing, construction, and business services and information technology.

Tennessee’s stated goal is to make sure that 55 percent of Tennesseans have a college degree or certificate by 2025. The state started by offering free tuition for two years of community college or technical school to every recent high school graduate in the state. The state in 2016 revised the program to allow a greater number of older adults to attend any of the 27 Tennessee Colleges of Applied Technology for free, starting in this coming fall.

The state pays for the programs through an endowment started with $300 million in excess lottery revenue. The program operates on interest from the endowment.

“I can absolutely tell you it figures in our conversations,” he said. Although he could not point to a specific employer won by free college, Krause said: “There’s a buzz now about education that wasn’t there before.”

But in Kalamazoo, a dozen years of free tuition have yielded mixed results.

Kalamazoo Promise, which is funded by anonymous donors, covers four years of tuition at any public college or university in Michigan or at 15 private colleges in the state. Students who attend Kalamazoo schools every year from kindergarten through 12th grade receive all tuition and fees paid; those who attend grades nine through 12 receive 65 percent of their costs paid.

Tim Ready, a sociology professor and director of the Walker Institute for the Study of Race and Ethnic Relations at Western Michigan University, said the first nine years of free tuition, which cost donors $54 million, was “marginally beneficial but not a slam dunk” for Kalamazoo’s economy.

“We had the Great Recession, which makes it hard to determine what the effect of Kalamazoo Promise on the economy has been,” Ready said. Other factors, such as a new university medical school, have played a role in the slowly recovering economy, he said.

Ready believes that free tuition is “necessary but not sufficient” to create economic impact. Between 2005 and 2014, the city’s public school enrollment grew by almost 25 percent (though the number of low-income kids receiving free lunches also increased). Kalamazoo now has more college graduates, and the erosion in its population has stopped.

But he cautioned that the progress “is not reaching everybody. There’s a lot of income inequality here.”

In Oregon, which also offers each participating student $1,000 for books and other expenses, the challenge has been finding money to keep the program going.

Oregon Promise, established by the Legislature in 2015, scrambled after its first year, 2016-17, when lawmakers, while increasing funding, appropriated less than needed to continue the program in its original form. Demand had risen more than expected.

The Legislature increased funding from $10 million in the start-up year to $40 million in the next two-year budget, but that was still $8 million short. To compensate, the state set stricter income eligibility limits for new students (current students were grandfathered in).

“States should be very careful about making promises they may not be able to keep,” he said. “When the program has to compete every year or every other year with other worthy needs in the state budget, legislators can find other priorities more compelling.”