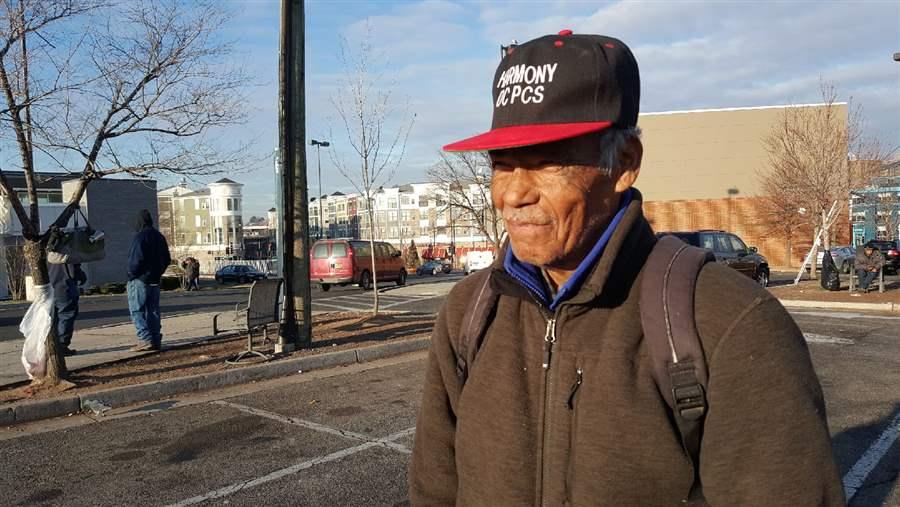 At 65, Marcos, who is undocumented, does not have health insurance. Whenever he is sick, he says, he stays at home and waits it out. Across the U.S., the aging, undocumented population is growing rapidly.

Editor's note: This story was updated Jan. 4 to clarify that the Texas Medical Association journal published the 2014 report that found that undocumented immigrants with kidney disease face considerable barriers to care.

WASHINGTON, D.C. — Early on a recent morning, men huddle in the Home Depot parking lot, ground zero for day laborers on the hunt for work. Cars pull into the lot, and the men swarm.

Among them is Marcos, at 65, wiry and bronzed with a silvery smile. He’s been in the country illegally for 20 years, working construction and landscaping, doing whatever he can get, whenever he can get it. When he’s sick, he just rests, because — like most undocumented workers — he doesn’t have insurance.

“I don’t know if I have high blood pressure,” he said, laughing ruefully, “Because I don’t check. Doctors, you know, are expensive.”

For decades, the United States has struggled to deal with the health care needs of its undocumented immigrants — now an estimated 11 million — mainly through emergency room care and community health centers. But in the coming years, that struggle will evolve. As with the rest of America, the population of people living here illegally is aging and beginning to develop the same health problems that plague senior citizens generally and are a lot more expensive to treat: chronic diseases, cognitive disorders and physical injuries.

Many undocumented adults lack health insurance, and even though they’re guaranteed emergency care for acute problems such as heart attacks, senior citizens without documentation don’t have access to care for chronic issues such as kidney disease and high blood pressure. What’s more, experts predict that many will — like Marcos — forgo primary preventive care even when it is available, likely making their chronic health problems worse — and more expensive to treat.

When uninsured people go without preventive health care and end up in the hospital, someone has to pay. Since most of these patients are low-income, much of their bill ends up as bad debt, which then pushes up rates for those who have insurance, or are billed to public programs like Emergency Medicaid, which is paid for out of general taxes.

This contributes to a game of shifting costs. Hospitals that don’t cover their costs go bankrupt and close, so indigent care costs that end up as unpaid bills are covered by other payers, such as insurance companies. When insurers pay more, they raise insurance premiums, passing on the costs to consumers, Wallace said.

Approximately 10 percent of the undocumented population is over 55 now, according to the Migration Policy Institute, but researchers agree that the percentage and the raw numbers almost certainly will rise.

Like Marcos, older undocumented people tend to be poor. The Affordable Care Act doesn’t cover them, and they don’t qualify for Medicaid, Medicare or Social Security, even though many pay taxes. They can buy private insurance, but few can afford it.

That means most must turn to emergency rooms or community health centers, federally funded clinics that provide primary health care to poor people on a sliding scale, regardless of their immigration status. But community health centers were originally created to provide maternity care to women and aren’t equipped to provide extensive care to undocumented seniors, Wallace said. And because Congress has yet to fund them this year, their future is precarious.

Leighton Ku, professor and director of the Center for Health Policy Research at George Washington University, said immigrants, both authorized and unauthorized, are much less likely to use health care than are U.S. citizens. This is partly because of language barriers, and partly cultural, Ku said. “They get sick, and grin and bear it.” Until, that is, they’re quite ill.

Many also fear running afoul of immigration authorities, health officials say, which means that by the time they get to the doctor, they’re even sicker.

“Their numbers are going to grow and we’re going to have an epidemic on our hands,” said Maryland state Del. Joseline Peña-Melnyk, a Democrat whose district has one of the highest rates of undocumented immigrants in the state. “Who’s going to pay for it?”

Already, there have been some indications as to who will have to foot the bill. A 2014 report published by the journal of the Texas Medical Association found that undocumented immigrants with kidney disease face considerable barriers to care. By the time they do get help, they need dialysis, costing Texas taxpayers as much as $10 million a year. 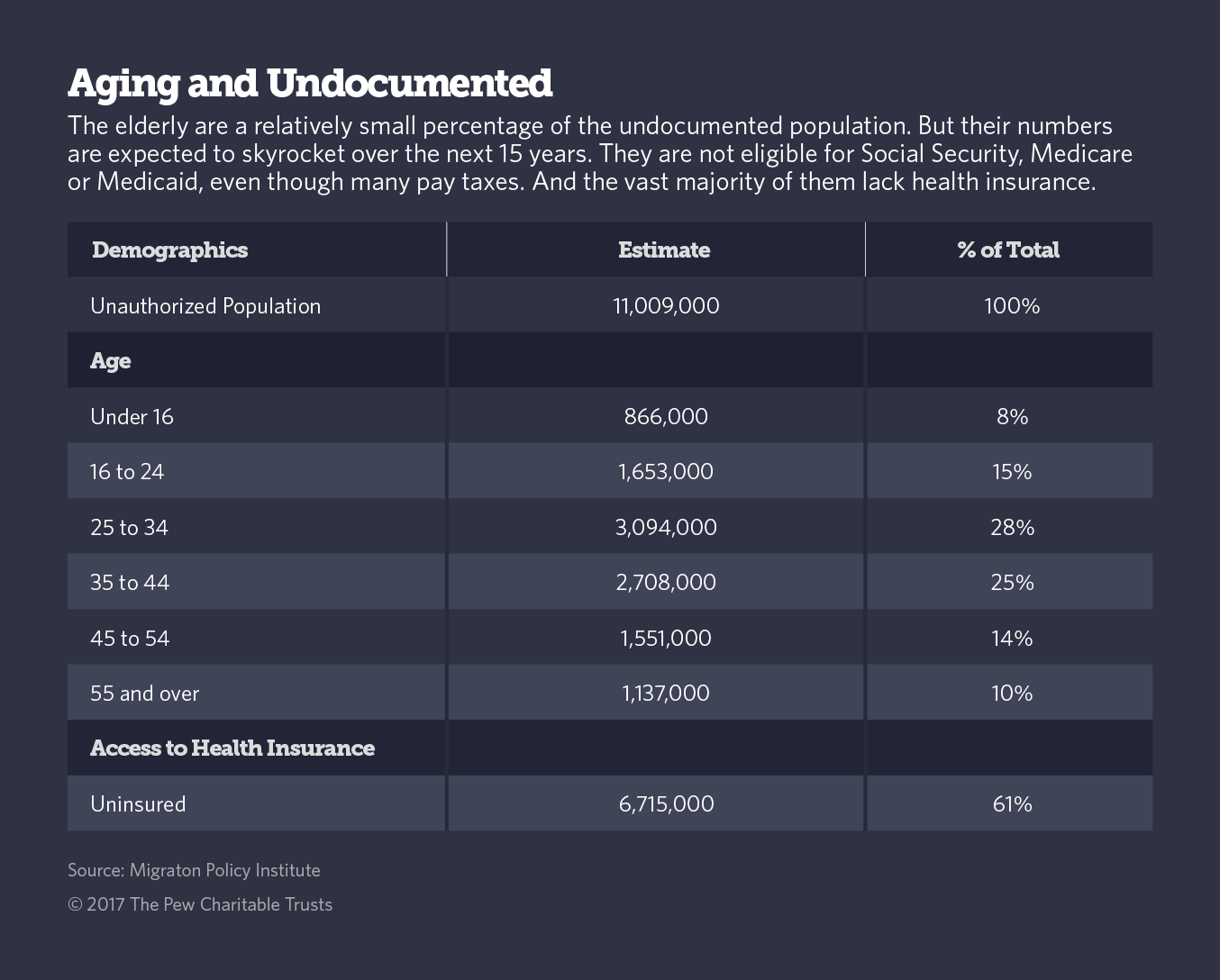 Stepping in to Help

Many cities have tried to step in. A 2016 Wall Street Journal story noted that 25 counties with large undocumented populations provide some non-emergency health care to these immigrants, at a combined cost of what the paper estimated is more than $1 billion each year.

Washington, D.C., Los Angeles and San Francisco are among the places where immigrants can usually get access to some kind of routine care, no matter their immigration status, thanks to locally funded health care programs.

In Los Angeles, Dr. Christina Hillson, a family practice doctor at the Eisner Health Clinic, said she’s seeing a growing number of undocumented patients in their 60s to 80s, whom she’s treated for everything from ovarian cancer to amputations resulting from untreated diabetes.

Her clinic is part of My Health LA, a Los Angeles county program that provides free primary care to low-income patients, including some undocumented patients if they qualify.

Patients who are critically ill are classified as emergencies and are able to get treated through the hospital system, she said. Sometimes, when patients aren’t as sick, Hillson will still refer them to the ER, because it’s the only way she can get their testing for a potentially deadly illness covered and get them connected to a specialist. She recently had to refer a 68-year-old undocumented patient with rapidly growing breast cancer to the ER, because that’s the only way she would be treated.

Snapshot of a Population

Most undocumented immigrants came to this country as young people and tended to be healthier than native-born citizens, Wallace said. But as they age, they lose that advantage, he said. This may be due to a combination of factors, from poverty to tough working conditions to adapting to American-style bad habits such as increased consumption of junk food and decreased physical activity, he said.

Of the country’s aging immigrants living here without documentation, women are more likely to have family in the U.S. who can help care for them as they age, said Randy Capps, a director of research at the Migration Policy Institute. But men, like Marcos, are more likely to be single and without a family support system. Because they often work as manual laborers, they’re more likely to be disabled from on the job injuries, Capps said, a number that’s likely to increase in the coming years.

“They’re going to age faster and become disabled at higher rates,” Capps said. “It’s going to make for a much tougher old age.” There’s no one easy solution to helping older residents who live in the United States illegally, health and immigration experts say.

“The policy solution for illegals is to enforce the law and encourage them to return home, thereby avoiding the problem,” said Steven Camarota, director of research for the Center for Immigration Studies, a conservative think tank that favors limiting immigration. “If someone wants to sponsor an elderly parent, making sure the sponsor has insurance for them before they come would solve much of the problem.”

Joe Caldwell, director of long-term services and supports policy at the National Council on Aging, an advocacy group, said community health centers could possibly provide acute care to undocumented seniors. And federal immigration legislation that provides a pathway to citizenship would put seniors in line to receive Medicare and Medicaid, he said.

Such legislation is unlikely any time soon.

Outside the Home Depot, Marcos and his friends gather in the cold sunshine, talking animatedly. He’s been paying taxes for years, Marcos said, and he’s got pages of documents to prove it. He’d love to become documented, “but that’s practically impossible,” he said.

A year ago, Marcos said, he had tightness in his chest. Could’ve been a pulled muscle, could’ve been a heart attack. He’s vague about the details. Without health insurance, he said, he had no choice but to go to the ER, but he hasn’t followed up since then. He’d rather stalk the parking lot here, looking for work.