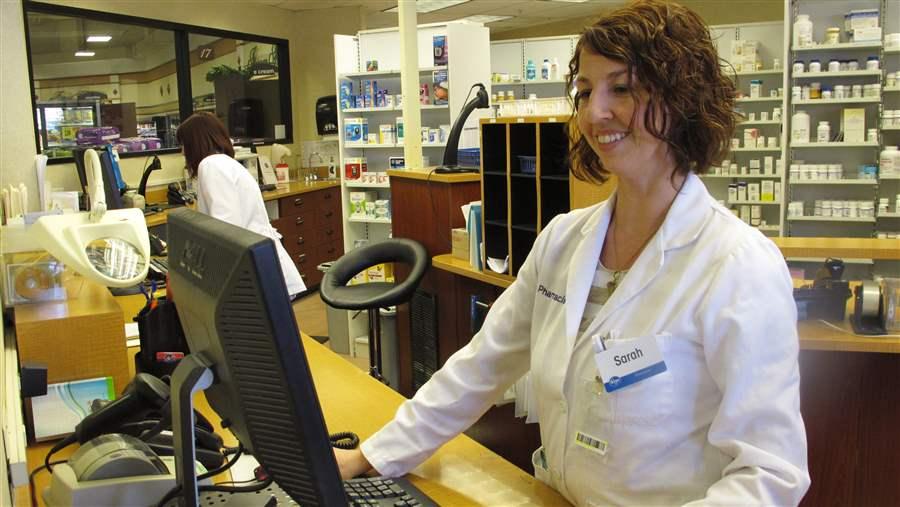 Pharmacist Sarah Burke checks a prescription drug database in Columbus, Ohio, to see whether the patient may be taking any controlled substances. Ohio is one of 39 states that have recently required physicians and other prescribers to run the same type of query before prescribing opioid pain medications.

Long before the current opioid epidemic, most states developed drug-tracking systems to allow physicians and pharmacists to check patients’ prescription drug use, including opioid painkillers, to determine whether they may be receiving too many pills, at too high a dose or in dangerous combination with other medications such as sedatives and muscle relaxants. But few prescribers took advantage of the systems.

Now, faced with a drug overdose epidemic that killed more than 63,000 people in 2016, at least 39 states are insisting that health professionals use the systems, known as prescription drug-monitoring programs, or PDMPs, to analyze each patient’s prescription drug use before writing another prescription for highly addictive drugs such as Percocet, Vicodin and OxyContin. In Missouri, the only state without a monitoring program, St. Louis County adopted a local drug-tracking system and made its use by physicians mandatory.

“We saw a big nationwide push this year to make prescription drug-monitoring programs mandatory, more comprehensive and effective, and easier to use,” said Chad Zadrazil, a legislative attorney with the National Alliance for Model State Drug Laws, a federally funded drug policy organization based in Iowa. He said some states also are expanding access to the databases to assist in public health initiatives.

In the past, drug databases were used primarily by police to track down so-called pill mills, where doctors indiscriminately prescribe opioid medications for cash. And most pharmacists consulted them before filling a prescription. But few doctors took the time to review the databases before prescribing highly addictive opioids.

Until states began requiring physicians to use prescription drug-monitoring programs, fewer than 35 percent of medical professionals used the tracking systems to identify patients who may be at risk for addiction and overdose, Zadrazil said. Now, in states that require doctors to consult PDMPs, he said, physician usage rates exceed 90 percent.

Overall opioid prescribing has declined in those states as well, as have drug-related hospitalizations and overdose deaths. States also are seeing a rise in addiction treatment as more doctors refer patients to treatment after discovering they are taking painkillers from multiple sources and are likely addicted, according to an analysis from Brandeis University’s Prescription Drug Monitoring Program Training and Technical Assistance Center. 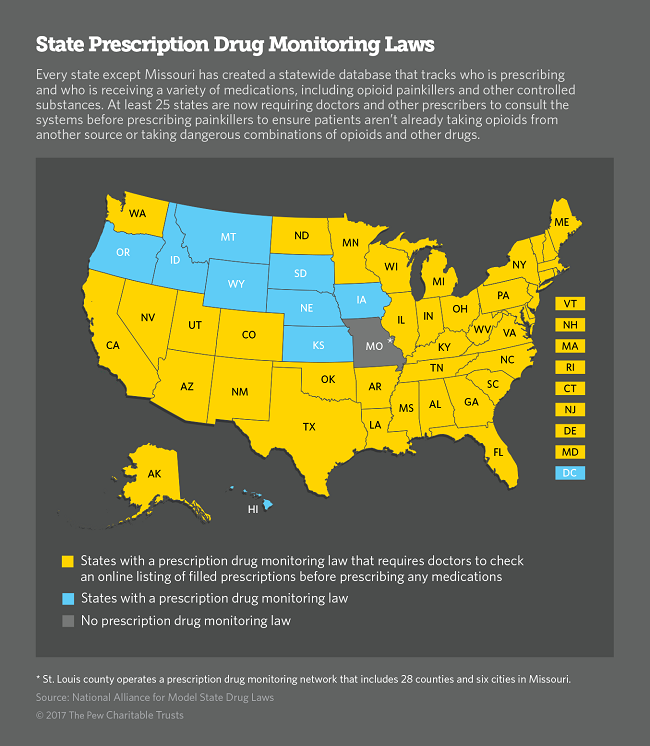 In addition to requiring doctors and other prescribers to use the tracking systems before prescribing potentially addictive and deadly drugs, Wisconsin, Utah and a few other states are adding information to prescription drug-monitoring programs — including overdose rescues, hospitalizations for drug-related conditions and drug-related arrests — that can help physicians determine when to curtail a patient’s drug use.

And for doctors who see a need for addiction treatment, Kentucky, Ohio, Virginia and Wisconsin include referral information about treatment services.

Arizona, Michigan, Ohio, Pennsylvania, Virginia and a handful of other states are revamping their drug-monitoring programs to make them compatible with electronic health record software systems commonly used by physicians and pharmacists, Zadrazil said. And nearly all states have started allowing busy doctors to appoint a delegate who can access the sensitive information and download patients’ drug history into their medical records prior to their appointment.

At least 47 states have started adding drug-monitoring data from one or more nearby states so physicians can see whether patients are receiving medications from prescribers in other states.

More than half of all states have added a physician assessment function to their PDMPs so doctors, nurses and other prescribers can see how their prescribing practices compare with others in their state, and whether and how often they are exceeding Centers for Disease Control and Prevention guidelines and state-imposed dosage and quantity limits. Washington state and Wisconsin send those report cards to doctors’ supervisors and medical directors.

A growing number of states also send unsolicited alerts to doctors, pharmacists and law enforcement when a patient starts receiving dangerously high doses of prescription opioids, has been taking opioids for longer than recommended, or is taking opioids in combination with other drugs such as sedatives or muscle relaxers that could cause dangerous interactions.

In a handful of states, new laws give public health departments access to some information on patients who receive opioids to help identify geographical hot spots where residents are receiving large quantities of opioids and other controlled substances and to analyze relationships between prescription drug use and overdose deaths.

In addition, 30 states make drug-monitoring data available to coroners, toxicologists and medical examiners to help determine which drugs may have been involved in an apparent overdose death.

In 2010, Colorado, Delaware, Louisiana, Nevada and Oklahoma were the first states to require doctors and other prescribers to search patients’ drug histories before prescribing opioid painkillers, sedatives or other potentially harmful and addictive drugs. By December 2016, at least 31 states were requiring prescriber use of PDMPs.

This year, eight more states — Alabama, Alaska, California, Florida, Michigan, South Carolina, Texas and Wisconsin — implemented policies requiring doctors to not only log in to the state’s prescription drug-tracking system before prescribing a controlled substance, but also to analyze each patient’s history of drug use, and if necessary, limit prescription renewals for opioids and other potentially addictive or dangerous medications, according to the Brandeis center.

The Centers for Disease Control and Prevention, the Substance Abuse and Mental Health Services Administration and the Bureau of Justice Assistance are encouraging all states to require PDMP use. The same agencies are also providing grants to help states upgrade prescription drug-monitoring programs to make them more effective at identifying patients who may be at risk of addiction, overdose and illicit sales of controlled substances.

Although the American Medical Association supports physician use of drug-tracking systems to identify potential addiction and drug diversion to the black market, some state medical societies have argued against mandatory rules they say interfere with the practice of medicine. Patients’ privacy and legitimate pain needs, they argue, could be jeopardized by requiring busy physicians to investigate potential patient abuse of pain medications.

Despite these objections from some in the medical profession, more states are imposing the requirements. “Comprehensive mandates are incredibly important and valuable,” said Pat Knue, director of the Brandeis prescription drug center. “But it would be better if practitioners used the prescription-monitoring systems voluntarily.”