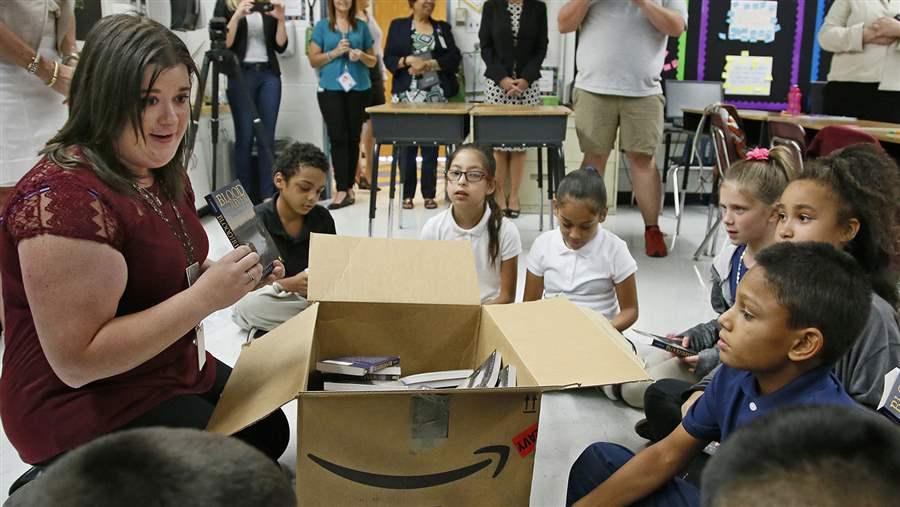 Monta Johnson, a fifth-grade teacher in Oklahoma City, passes out books to her class. Oklahoma teachers haven’t had a raise since 2008.

All 50 states began the current school year short on teachers. And schools nationwide still are scrambling to fill positions in a range of subjects, from chronically hard-to-staff ones such as special education to usually easy-to-staff grades such as kindergarten.

Districts that can’t find a qualified teacher may stop offering a certain class or hire a rookie with an emergency credential, a move that could lower the quality of instruction. So lawmakers in several states took action this year to increase the supply of new teachers or raise teacher compensation.

“The teacher labor market is a labor market like any other,” said Elizabeth Ross, managing director for state policy at the National Council on Teacher Quality, a nonprofit research group in Washington, D.C.

Arizona, Illinois and Minnesota are among the states that have sought to increase the supply of teachers by changing their licensure rules to make it easier for people who didn’t complete a traditional teacher preparation program to enter the classroom.

In Minnesota, for instance, under the new structure aspiring career and technical education teachers no longer need a bachelor’s degree to get a teaching license. They can get a one-year teaching license if they have an associate degree, an industry credential or at least five years of work experience. The one-year license can be renewed three times.

Changing licensure rules can be controversial, however. Gov. Mark Dayton, a Democrat, vetoed the Minnesota Legislature’s first attempt to change teacher licensing requirements. He argued that lawmakers needed to allocate funding to implement the new rules and questioned whether the proposed changes could hurt students.

“Without a requirement that teaching candidates demonstrate comprehensive training in subject matter content and pedagogy, we risk providing our students with educators who are inadequately prepared,” he wrote in his veto letter.

Other states have tried to increase the supply of teachers by making education degrees less expensive or shortening the time required to get one. Arizona Republican Gov. Doug Ducey asked the state’s public universities to create new scholarships for students pursuing education degrees. Virginia’s Democratic Gov. Terry McAuliffe directed the state Board of Education to let colleges and universities offer an undergraduate major in teaching, something the state didn’t previously allow.

And some states, such as Idaho, are raising teacher salaries in order to encourage more people to become teachers and stay in the profession. Ducey called for a teacher salary increase in his state of the state address earlier this year, as did McAuliffe earlier this month.

Oklahoma’s Republican Gov. Mary Fallin has championed a teacher pay increase. Oklahoma teachers haven’t had a raise since 2008, and teachers are finding that they can earn more in neighboring states.

But finding money to raise pay has been a hard sell in a state where lawmakers have cut education funding in order to address an ongoing budget shortfall. Funding has dropped so low that some districts are only holding classes four days a week — a schedule Fallin has called “unacceptable.”

Oklahomans voted down a ballot initiative last year that would have raised the sales tax by 1 percent to support education funding. The Legislature hasn’t voted on a proposal for raising teacher pay since then, said Christy Watson, communications director for the Oklahoma State School Boards Association.

With over 1,800 positions in the state currently filled by people who hold an emergency teaching credential — which superintendents request as a last resort in order to hire someone who isn’t a certified teacher — up from 1,100 last year, Watson says the shortages are getting worse. “It’s not a secret that it’s going to take a teacher pay raise to really put us on the right path.”

State efforts to address teacher shortages are hampered by the fact that states don’t collect and publish good data on the positions districts need to fill or on teacher program graduates, says Ross of the National Council on Teacher Quality.

“One of the most important tools that states can put in place is to develop very strong and clear supply and demand data,” she said. Maryland, for example, publishes a teacher staffing report every two years that tracks hiring trends and reveals mismatches between the jobs open and the qualifications of teacher training program graduates.

One strategy states can use to attract candidates to hard-to-fill teaching positions — once they have good data on shortage areas — is to offer higher pay for those jobs, Ross said. Her organization found that 31 states create pay incentives in some way, such as offering student loan assistance to new teachers who work in high-need areas. Three states — Florida, New Mexico and Utah — have a model program for giving additional stipends to all people who teach in shortage areas.

There are plenty of other steps states and districts can take to help make teaching jobs more attractive, such as investing in mentoring for new teachers or creating a clear career ladder that gives ambitious professionals a reason to stay in the profession.