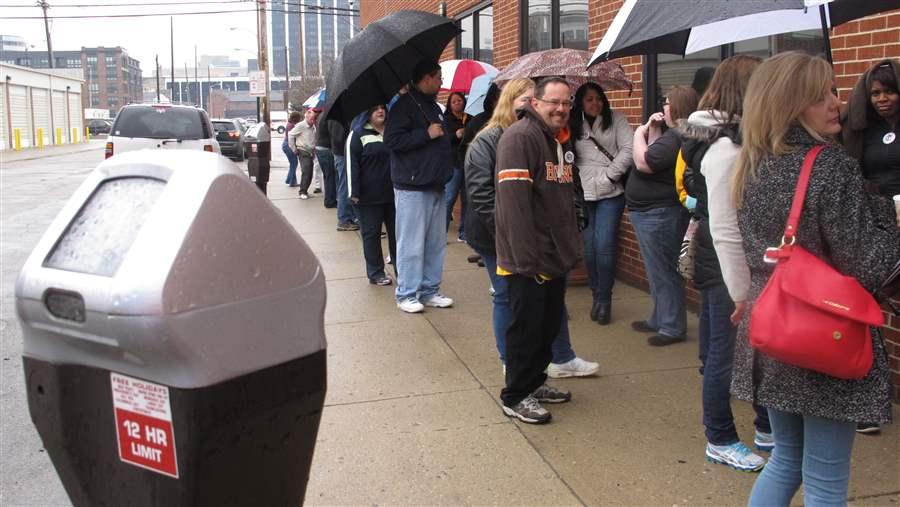 Adoptees wait outside the state Office of Vital Statistics to apply in person for their birth certificates and adoption records in Columbus, Ohio. A number of states have enacted laws giving adult adoptees access to their original, sealed birth certificates.

Starting next month, Missouri adoptees 18 and over will be able to get access to their birth certificates without having to get a court order.

Those records were sealed in most states decades ago to help protect the confidentiality of birth mothers, especially those who were unwed and faced the stigma of having a child out of wedlock.

But with more openness in the adoption process and pressure from adoptee rights groups, the mood has shifted in recent years. Today about half the states allow adult adoptees some type of access to their original birth certificate without going to court.

In at least nine states — Alabama, Alaska, Colorado, Hawaii, Kansas, Maine, New Hampshire, Rhode Island (for those 25 and older) and Oregon — adult adoptees have complete access to those records, according to Nina Williams-Mbengue, a program director at the National Conference of State Legislatures.

The new Missouri law does not allow unfettered access. Birth parents who want to remain anonymous can fill out a form indicating that they prefer not to be contacted by the adoptee, and their names will be kept confidential and redacted from the document.

Advocates for adoptees are welcoming the new openness. “Some adoptees are still in a state of disbelief. We’ve been told for decades that this would never happen,” said Heather Dodd, founder of the Missouri Adoptee Rights Movement. “To have the law finally changed is pretty uplifting and amazing.”

Adoptees who support open access say their original birth records can help them understand their backgrounds by revealing where they were born and their birth parents’ names and addresses.

Opponents say birth records shouldn’t be opened to adoptees without the biological parents’ approval. They believe it’s a matter of privacy and want to protect parents from unwanted contact with their adult children.

Tyler McClay, general counsel for the Missouri Catholic Conference, which opposed opening the birth records to adoptees, said the group was concerned about birth mothers who may have been very young and vulnerable and believed the adoption was confidential.

“We made this promise to birth mothers back in the day, and we wanted to honor that,” he said.

While his group didn’t succeed in blocking the legislation in Missouri, McClay said it was able to negotiate a compromise that included the birth parent opt-out provision. It also was able to delay the legislation’s full implementation, he said.

Former Democratic Gov. Jay Nixon signed the Missouri Adoptee Rights Act into law in 2016, but initially it only applied to those born before 1941 because that was the year the state started sealing all original birth certificates. Adoptees born in 1941 and after had to wait until Jan. 2, 2018, to get access, under the law.

McClay said this was done at the request of the Catholic Conference, which wanted to get the word out to birth parents, and give them time to decide whether they want to have their names redacted.

McClay said he thinks the controversy over allowing adoptees access to their birth records will eventually fade away.

“Time is moving on. Most adoptions now are open. This kind of clandestine thing is not the norm anymore,” he said. “People want to know who they are. I get it. It’s a fair argument.”