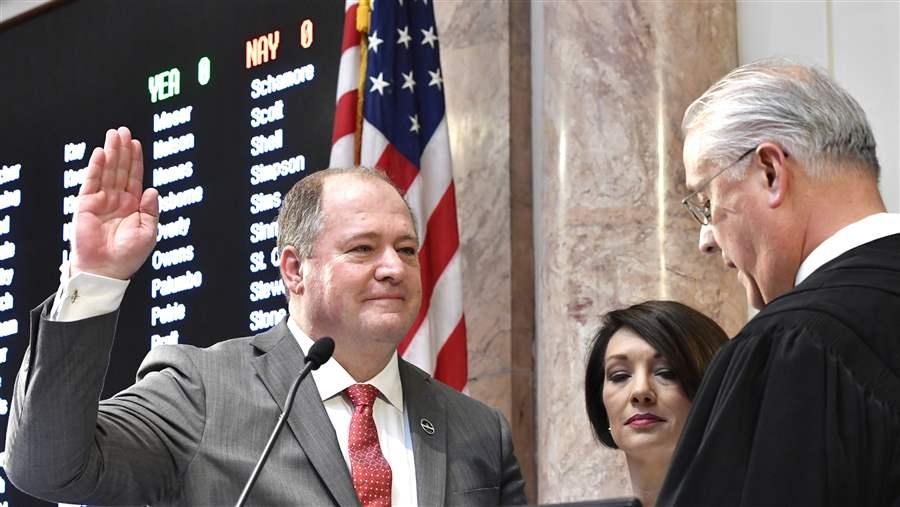 Republican Kentucky state Rep. Jeff Hoover, left, is sworn in as House speaker. Hoover resigned his post as speaker this month after he was accused of sexual harassment.

The movement that has empowered women across the country to levy sexual assault and harassment allegations against powerful men continues to snowball, causing an uprising in many industries, including state politics.

In the past few months, since Hollywood producer Harvey Weinstein was accused of sexual assault, at least 18 male state lawmakers facing allegations in a dozen states have resigned, announced they will resign, been ousted from a leadership position, or otherwise punished, a Stateline review has found. The accusations, coming amid the larger #metoo movement, have sent legislative leaders in multiple states scrambling to strengthen their policies and procedures to prevent harassment. More than half of the states have created new policies, instituted more regular anti-harassment training, made changes to how allegations are reported and investigated, or are reviewing their procedures.

But while their proposals are receiving praise, there’s a growing worry that they won’t lead to lasting change. Many women working in state capitols have seized this moment to reveal not only that they’ve been assaulted or harassed, but that they generally haven’t felt comfortable at work for years. Many worry that the movement will fizzle out, chasing vulnerable women — including young staffers, new lawmakers and lobbyists — back into the shadows.

That’s something that Sarah Walker, a lobbyist in Minnesota, had on her mind from the moment she told her story to local reporters. Walker says Republican state Rep. Tony Cornish propositioned her for sex dozens of times and once forced her up against a wall to try to kiss her. Cornish at first denied the allegations but then announced he would resign, along with another state senator facing similar allegations.

Walker was going to stay anonymous, but she said she wanted to come forward to create a safer environment for women in statehouses to do the same — and to help do that, she had to give her name.

“I did want to give a message that you can come forward and you can still be a successful lobbyist and a strong woman,” Walker said.

Cornish is one of at least eight male lawmakers — in Alaska, California, Florida, Minnesota, Mississippi and Ohio — who have resigned or announced they will resign from the legislature since early October. At least nine other male state lawmakers — in Arizona, California, Illinois, Kentucky, Oregon and Washington — have resigned or been removed from a committee role or other leadership position. One other lawmaker, New York Assemblyman Steven McLaughlin, a Republican, received other punishment, including being told he could not hire interns and had to complete anti-harassment training.

And in Kentucky, state Rep. Dan Johnson, a Republican, took his own life just days after he was accused of molesting a 17-year-old girl in 2012. Johnson denied the allegations.

The far-reaching conversation about improper behavior in the workplace might change the environment in statehouses across the country come January — at least temporarily.

“It may give sitting legislatures some pause, in terms of their own behavior,” said Jean Sinzdak, associate director of the Center for American Women and Politics at Rutgers University.

Whether the movement permanently changes the culture in statehouses, though, is not clear, Sinzdak said.

More important than training, though, Sinzdak said, will be ensuring that women have a clear and safe way to report allegations, and creating a fair and thorough investigative process. At least 19 legislatures are updating or reviewing their code of conduct, policies or procedures.

In many states, allegations are reported to legislative leaders. That leaves victims vulnerable both to political decisions about how to investigate, and to political retribution, according to many lawmakers who have started to reconsider their policies. Some states, such as Illinois and Vermont, are looking for ways to give the investigating authority to someone outside the legislature.

In Colorado, top lawmakers in each chamber voted this month to hire a human resources officer to take complaints. In Maryland, lawmakers instituted a new process to track harassment claims. And in Iowa, Senate Majority Leader Bill Dix, a Republican, said he would hire a consultant to review whether to hire a new human resources manager.

If politicians stay involved in the process, women will be afraid to come forward, Walker said. She thinks policies should protect lobbyists as well as lawmakers. She felt she had to go to the media to be heard, she said, and that was rough. “It was the most stressful two weeks I’ve ever experienced.”

More changes may come when legislative sessions begin. Some legislators already have filed bills, including one in Arizona that would ban the use of confidentiality agreements in sexual harassment cases in which an elected official is accused, one in Pennsylvania that would amend the ethical conduct rules of the state House of Representatives, and two in Illinois that would change the legislative ethics commission and establish a hotline.

In California, Assemblywoman Laura Friedman, a Democrat who is leading a new subcommittee that will make recommended changes to the chamber’s sexual harassment policies, said she thinks the Legislature needs a process in which punishment is decided by an independent party, such as an ethics officer or ombudsman. Right now, members of the rules committee and other legislative leaders determine what actions to take, Friedman said. Those decisions shouldn’t be left to lawmakers, she said.

“We are all so connected to each other, and rely on one another for votes and political support and everything,” Friedman said.

The California Legislature has contracted with an outside company to provide a hotline that victims can call to get counseling services and information about how to report allegations. Friedman wants the subcommittee to make the investigation process more transparent so the public has a better idea of what goes on at the Capitol.

Friedman said she isn’t sure this is the path the subcommittee will take. But she hopes the changes will create a robust system that will stand the test of time, even as politicians transition in and out of their roles and leadership changes.

“We know this (movement) has been a stain on the Legislature and politicians in general,” she said, “and we want people to know that people who do wrong don’t represent all of us.”