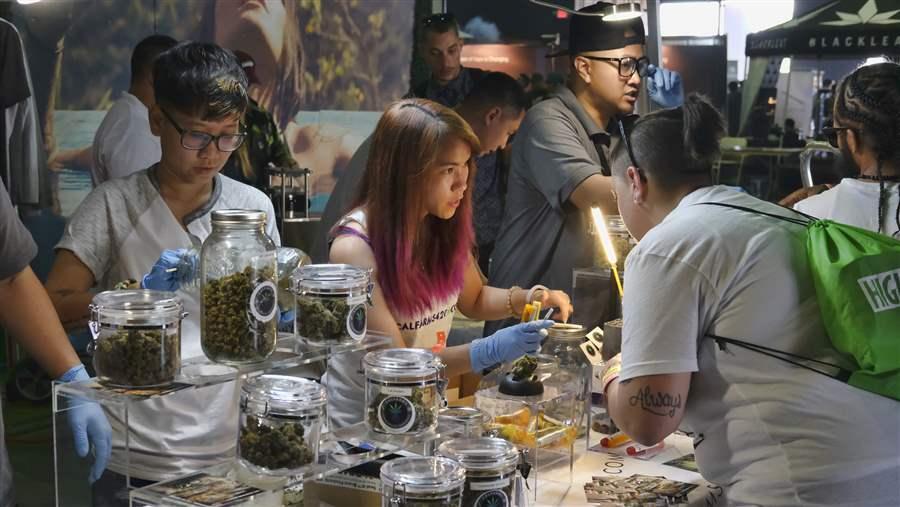 People don’t just smoke marijuana. They vaporize it, bake it into brownies, use it in eye drops, and rub extracts of it onto their skin. Some people use the drug as medicine, others for the fun of getting high.

In states that have legalized pot, regulators have struggled to make sure the bewildering array of products on dispensary shelves are safe to consume. States where the drug has been legally sold for several years such as Colorado, Oregon and Washington are still trying to figure out standards and laboratory testing rules for potential toxins such as pesticides, solvents and mold.

“The big challenge with this industry is the speed at which it innovates and evolves,” said Danica Lee, director of public health inspections for the city of Denver. “It continues to be a bit of an adventure.”

The link between illness and tainted marijuana isn’t well established. But anecdotes have emerged of vulnerable consumers, such as cancer patients, contracting dangerous infections after smoking bad weed.

States and cities are trying to head off a health crisis before it can happen. They’re balancing public safety concerns against some marijuana growers’ and manufacturers’ reluctance to pay for testing that’s expensive and not proven to improve safety, and some laboratories’ eagerness to run additional tests.

Lori Ajax, California’s chief of cannabis regulation, said earlier this year that writing regulations for lab testing was probably the biggest challenge her team faced in writing medical marijuana regulations. The medical marijuana rules have since been folded into rules for the adult use market, which opens Jan. 1.

And they’ve also had to adjust testing regulations to reflect the costs and amount of tests fledgling legal marijuana markets can handle.

In Oregon, for instance, initial rules rolled out in October 2016 for marijuana testing and laboratory accreditation contributed to backlogs at laboratories and shortages of product on dispensary shelves. Regulators, seeking to ease the pressure on the market, issued new rules that December that reduced the number of times a harvest, or a batch of chocolates or candies, would have to be tested.

Donald Morse, a dispensary owner and chairman of the Oregon Cannabis Business Council, a trade group, said too much testing would have raised the price of marijuana too far. “It would have been out of reach to most people, and they would end up going back to the black market.”

In general, Nassif said, states have come up with a menu of substances for which to test medical marijuana, including heavy metals, dangerous pesticides and microorganisms, such as E. coli. As they expand to also permit all adults to buy the drug, many are including the same requirements for all kinds of weed.

Under California’s new rules for pesticides, for instance, marijuana that tests positive for some pesticides and over a set limit for others cannot be sold.

States also typically require testing for major cannabinoids — such as tetrahydrocannabinol, or THC, the chemical compound that gets you high — for both medicinal and recreational marijuana, so consumers know what they’re about to smoke.

The first states to regulate cannabis made their testing rules more or less on the fly, based on what scientists know makes people sick.

For instance, foods generally need to be refrigerated and processed properly to avoid developing dangerous bacteria such as botulism. So Denver, one of the first cities to begin food safety inspections of pot products, requires dispensaries to refrigerate many edibles and hash oils at 41 degrees or less.

Other safety questions are harder to answer. Take pesticides: There’s hardly any research on what pesticides are safe to use on cannabis plants, which are processed and consumed in multiple ways. Concentrating cannabis to create oils, waxes and tinctures may concentrate pesticide residue.

Denver has erred on the side of caution by recalling products that test positive for pesticides the state department of agriculture has not approved for use on cannabis. The city public health office’s recall notices all include a disclaimer: “The possible health impact of consuming marijuana products with unapproved pesticide residues is unknown.”

Or take bacteria and fungi: Some organisms, like the fungus aspergillus, have been found on marijuana plants and can lead to dangerous infections in people with compromised immune systems. States such as California have erred on the side of caution and required testing for the organism.

Denver’s Danica Lee said her office often gets calls from public health officials in other states who want advice. She can’t offer easy answers, because marijuana growing and processing practices are so varied. “There are probably as many ways of making a concentrate as there are businesses making concentrates,” she said.

Instead, she advises other officials to ask questions until they understand the processes local businesses are using. Denver issued its first marijuana recall, for instance, after food safety inspectors found an edibles business was using a clothes washing machine to extract THC from weed. Although nobody got sick from eating the resulting brownie mixes, blondie mixes, rice crispy treats and candies, regulators were concerned about the choice of equipment.

In many states that have legalized marijuana, a new industry of cannabis testing labs has sprung up. In these licensed labs, white-coated scientists run samples of marijuana plants and products through liquid and gas chromatography machines or swirl them with solvents to extract pesticide residue. 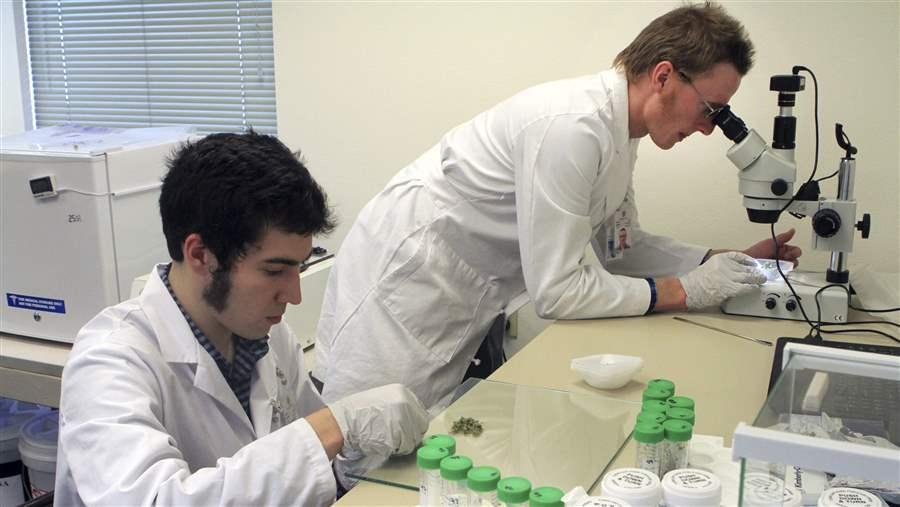 But labs in a given state may come up with wildly different results. “There are no accepted, standard procedures for all test types,” said Jeff Raber, founder of the Werc Shop, a cannabis research center and testing laboratory based in Monrovia, California. It’s not like testing aspirin, where there’s one set process to follow, he said. “We don’t have anything like that in cannabis yet.”

States have found they need to write detailed rules and standards for laboratories to follow. In Alaska, cannabis regulators are convening next month to rethink their testing regulations because the state’s two privately owned cannabis testing labs are producing wildly different THC content results.

Consumers often go looking for pot with a high THC rating, which gives cultivators an incentive to seek out labs that find lots of THC in their product, and gives labs an incentive to goose the numbers.

Jedediah Smith, a local government specialist at the Alaska Alcohol and Marijuana Control Office, said testing regulations may be too vague. “There need to be consistent methods across all of the labs,” he said. The current regulations don’t specifically say “this is the method that’s been proven and needs to be used.”

Sampling could be an issue, he said, as in Alaska where growers select samples of marijuana plants and bring them to labs themselves. In other states, such as Oregon, laboratories do the sampling, which may lead to a more representative, randomized result.

In addition to its sampling rules, Oregon requires cannabis labs to be accredited by a state environmental laboratory program, which has helped standardize lab results. “However, we still have issues with consistency between labs,” said André Ourso, administrator of the Center for Health Protection at the Oregon Health Authority’s Public Health Division. Ourso said labs may need additional oversight after they’re accredited.

Alaska’s laboratories are not certified by a state agency, although they are inspected by the American Association for Laboratory Accreditation, a nonprofit, Smith said.

Oregon’s regulations have evolved to reflect the level of testing that the state’s labs, and cannabis industry, can handle. “The industry, at first, was probably taken aback by the cost of testing,” Ourso said.

Under current rules, samples must be taken from each 15 pound batch of harvested usable marijuana. Morse says that gives large operators growing hundreds of pounds of marijuana plants an advantage over small operators growing three or four plants, because the large growers can move the maximum amount of the drug through the testing system.

“It’s simple economics, it’s economies of scale,” he said. For a large operator, testing costs about 35 cents per gram of marijuana, he said, and given that a gram sells for $3 to $12, that’s not too expensive.

California’s latest regulations also roll back the amount of testing required. Officials initially proposed testing a sample from harvested batches of up to 10 pounds of medical marijuana, for instance. They estimated that each test under the proposed regulations would cost $1,375.

The sample size went up to a 50-pound maximum in the final regulations, which apply to both medical and recreational cannabis.

Hezekiah Allen, executive director of the California Growers Association, a trade group, said his organization supported the 10-pound proposal but it would have created too many samples for the state’s limited number of cannabis laboratories to manage. “It was just too much volume,” he said.

Reggie Gaudino, vice president of scientific operations and director of intellectual property for Steep Hill Labs, a cannabis laboratory company based in Oakland, California, said the larger batch size will lead to a less detailed analysis of the product.

Testing regulations are getting better over time as states learn from each other, Raber of the Werc Shop said. “California has the benefit of looking at all the other states.” But even in the Golden State, it may take a couple of years of adjustments before the state finds the right balance for its legal cannabis market.