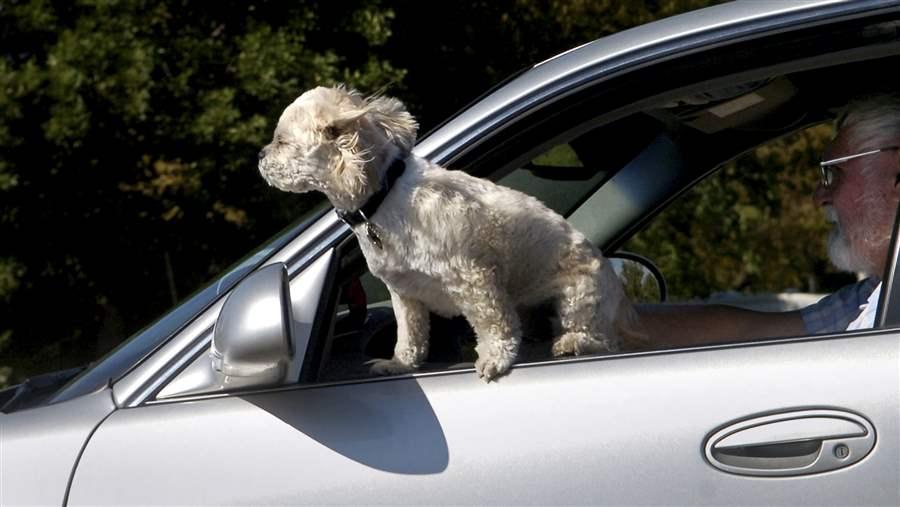 A small dog leans out of a window in Great Falls, Montana. In most states it’s legal for animals to sit in drivers’ laps or be unrestrained in cars. Traffic safety experts say that’s dangerous for both motorists and animals.

Those happy dogs sitting in a driver’s lap or hanging their heads out the car window may look like the model of canine companionship. But they’re also potential projectiles, poised to rocket through the air if there’s a crash.

“A 10-pound dog can turn into 300 pounds of force at 30 miles an hour,” said Richard Romer, AAA’s state relations manager. “Going on a trip with Fido can really turn fatal if it’s not restrained.”

But while traffic safety experts say a dog moving freely in a car can be dangerous for the driver, passengers, other motorists and the pet, it’s perfectly legal in most states.

Hawaii is the only state that specifically prohibits drivers from holding an animal in their lap or allowing one in their immediate area if it interferes with their ability to control the car, according to AAA. In at least three states — Nevada, New Jersey and Washington — animal cruelty laws that make it illegal to improperly transport an animal could apply to driving with an unrestrained pet, but Romer said they are likely to be enforced only in egregious situations.

Washington and at least seven other states and the District of Columbia have comprehensive distracted driving laws that generally prohibit careless driving or tasks not associated with operating the vehicle, and interacting with a pet might be considered a distraction, Romer said. D.C.’s law is the only one that specifically mentions pet interactions in its definition of distracted driving.

But passing laws specifically to forbid furry friends from sitting in drivers’ laps is another matter. In the past five years, nearly a dozen states have considered such bills, but none has become law, according to the National Conference of State Legislatures. In California, the Legislature passed a measure in 2008. It was vetoed by then-Gov. Arnold Schwarzenegger, a Republican, who said the bill wasn’t a priority.

This year, at least five states — Indiana, Maine, North Carolina, Oregon and Pennsylvania — considered such bills. Four either died or were withdrawn by sponsors; the Pennsylvania measure is pending. In November, a Michigan state legislator filed a similar bill for the 2018 session.

State legislators who have sponsored bills to ban animals in laps or require them to be restrained in cars often have been met with howls from pet owners.

“The public outcry was unreal,” said North Carolina state Rep. Garland Pierce, a Democrat who filed a bill in February that would have imposed a $100 fine for driving with an animal in your lap. Facing a deluge of complaints from angry dog owners, he withdrew the bill just a week later.

“I got ridiculed. I got beat up bad,” said Pierce, who previously sponsored a successful bill to ban texting while driving. “I saw this as a highway safety issue. I had no idea that I was opening a can of worms.”

Pennsylvania Democratic state Rep. Angel Cruz, who is sponsoring a bill to ban pets in drivers’ laps, said he has tried to get the measure passed in previous sessions but it hasn’t gotten anywhere — and still isn’t.

“You can’t drive with a child on your lap. You have to put it in a car seat. And you can’t be distracted with a cellphone,” he said. “So how can you drive with a pet in your lap?”

While some pet owners use harnesses, crates or carriers to transport pets in their cars, many prefer driving with their animals untethered.

A 2011 survey of dog owners by AAA and Kurgo, a pet travel product manufacturer, found that most agreed that having an unrestrained dog in the car could be dangerous, but only 16 percent said they used some form of restraint.

The survey also revealed how distracting it can be for drivers to have an unrestrained canine in the car. Fifty-two percent admitted petting their dog while driving, 19 percent said they have used their hands or arms to keep it from climbing into the front seat, and 17 percent have held it or allowed it to sit in their lap.

The results can be serious — even tragic.

Last year, a 76-year-old North Dakota woman drove her car into a pond when her Shih Tzu jumped into her lap and blocked her view. In November, a 19-year-old Maine driver with a cat in her lap got distracted, swerved into the oncoming lane and ran into a school bus, injuring herself, some students and the bus driver — and killing her cat. And in 2012, police say, a 47-year-old Washington state driver who was killed after crashing into an SUV may have been distracted by the Chihuahua sitting in her lap.

The American Veterinary Medical Association recommends restraining animals in a vehicle with a secure harness or carrier. It says a pet sitting in a driver’s lap could be injured or killed by an airbag and an untethered pet could be thrown out of a window or through the windshield.

Lindsey Wolko, founder of the Center for Pet Safety, a nonprofit consumer watchdog group that tests the safety of pet products, said pets should be in back seats and restrained, but those restraints need to be crash-tested and certified to be safe. Her center has tested harnesses, crates and carriers and found that many are not safe, she said.

But educating pet owners about the risks of driving with an unrestrained animal is much more effective than trying to enact laws, she said. “Pet owners often don’t want that type of regulation. It’s a very emotional thing. They think it’s overkill, that it’s not necessary.”

Connecticut Republican state Rep. Fred Camillo, a dog lover who frequently drives around with his unrestrained German shepherd in his SUV, said he was skeptical about a 2015 bill that would have barred drivers from having pets in their laps and made it a distracted driving offense.

“I’m all for tougher distracted driving laws, but they didn’t come up with any statistics showing this was a problem,” Camillo said. “Are we going to pass laws without any hard evidence? If the stats are out there, I’m willing to be open-minded. But I haven’t seen anything.”

The National Highway Transportation Safety Administration doesn’t keep data on how many crashes or fatalities are linked to unsecured pets, and traffic safety experts say it’s unlikely states do either. Nor is there much information available about how often police ticket drivers for being distracted by their pets.

Even in Hawaii, which has had its law for decades and imposes a $97 fine for driving with a “person, animal, or object” in your lap, officials don’t track how many of those citations by police specifically involved animals. Last year, Honolulu police issued 38 such citations; this year they issued 13, according to the Hawaii Department of Transportation.

Brooks Baehr, spokesman for the Honolulu Department of the Prosecuting Attorney, said that in the past four years, two people have been prosecuted for driving with a pooch in their lap or close by. One was a man with a little dog in the passenger seat of his Mercedes. The other was a woman in a Cadillac Escalade whom police spotted with a small, long-haired dog in her lap. One of her hands was on the wheel. In the other she had a cellphone, and she was looking down at it.