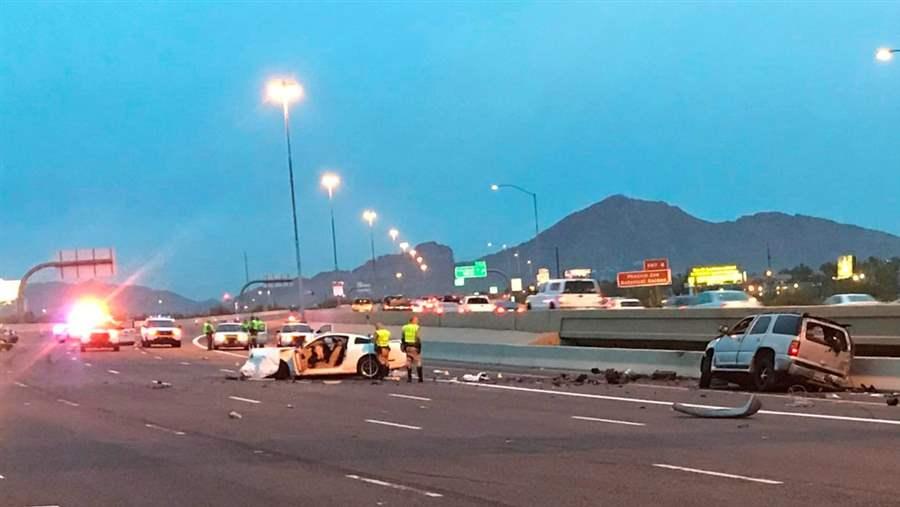 The suspected wrong-way driver in this Tempe, Arizona, crash had a blood alcohol content of .32. Highway officials across the country are installing new technology to try to prevent wrong-way crashes.

PHOENIX, Ariz. — If a driver turns the wrong way onto the freeway here, northwest of downtown Phoenix, the driver should instantly know he’s made a grave error. If not, though, at least others will.

Thermal cameras recently installed on more than 30 off-ramps and along a 15-mile stretch of Interstate 17 will detect drivers who enter the ramps going the wrong way. When it detects a wrong-way driver, the system will light up a large, eye-level “Wrong Way” sign with flashing bright red LED lights. It will also track the driver and alert law enforcement and highway officials, who can broadcast warnings on highway message boards, turn freeway entrance-ramp signals to red, and even send an alert to other drivers on the highway who have downloaded a free app.

Alerting other drivers is just as important as trying to stop the wrong-way driver, said John Halikowski, director of the Arizona Department of Transportation. “We want drivers to have a chance.”

A spate of wrong-way crashes in the Phoenix area and many other regions across the country in the past five years has pushed state officials to test how technology can prevent the crashes and save lives. Highway officials in California, Florida, Rhode Island and Texas have installed systems similar to Arizona’s as part of pilot projects that they may expand to other wrong-way driving hotspots in their states.

While, overall, vehicle crash deaths in the United States have declined in the past decade, wrong-way crashes have maintained their deadly toll. At least 382 people died in the crashes in 2014, according to the most recent data from the U.S. Department of Transportation Federal Highway Administration. In about 60 percent of wrong-way crashes, wrong-way drivers are impaired by alcohol. But even as law enforcement agencies fight that problem, highway officials in many states say the sometimes-pricey technology can be another tool to save lives.

Deaths by wrong-way vehicle crashes make up about 1 in every 100 traffic-related deaths in the United States — a small percentage, “but also a very visible one,” Halikowksi said. There is a fatality in about 20 to 25 percent of all wrong-way crashes, compared to about 0.5 percent of all vehicle crashes, according to state studies in Arizona and Michigan, and federal crash data.

Just a few weeks ago in Arizona, a man was ejected from his vehicle and seriously injured at around 3:40 a.m. in a suspected wrong-way crash on a freeway in Tempe, a city just east of Phoenix, that was not equipped with the warning system. The other driver was not seriously injured. The wrong-way driver had a blood alcohol content of about .32, which is four times the legal limit.

States interested in the upgrades must find funding in transportation budgets already strained with repairing deteriorating roads and bridges. Depending on what’s installed — from illuminated signs to entire systems such as Arizona’s — the cost at each off-ramp can be anywhere from a few thousand dollars to more than $25,000. Arizona’s pilot project, which covers just 15 miles of the state’s 6,780-mile highway system, cost $3.7 million.

“Clearly, the technology we are deploying is absolutely saving lives,” said Raj Ponnaluri, a system engineer with the Florida Department of Transportation. 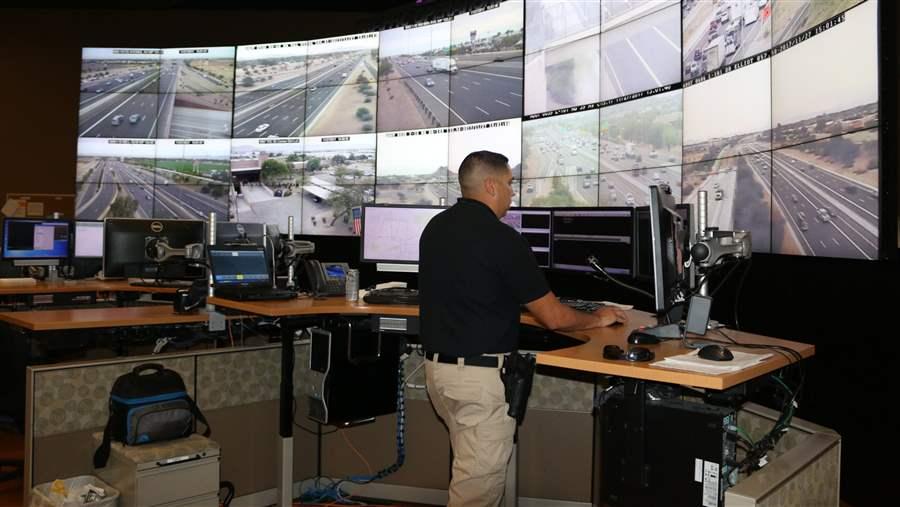 Arizona state trooper David Duran monitors the control room of the state Department of Transportation’s traffic operations center. In the event of a wrong-way crash, Duran can alert troopers and highway officials can warn other drivers on highway message boards.

Interest in reducing wrong-way crashes increased nationally in 2012, after the National Transportation Safety Board published a study highlighting the main causes of wrong-way crashes — drivers impaired by drugs or alcohol as well as older, disoriented drivers — and suggesting potential solutions, said Jeff Shaw, a program manager at the Federal Highway Administration. That report caused a “flurry of activity” at the state level, he said.

The challenge, highway officials say, is finding a way to get the attention of intoxicated, disoriented or otherwise impaired drivers.

States started to try to address the problem decades ago with simple and inexpensive solutions such as additional wrong-way signs, pavement arrows and raised markers, said Melisa Finley, a research engineer at Texas A&M Transportation Institute.

Highway officials say an oft-cited suggestion — spike strips on the off-ramp — isn’t an option, for many reasons: The spikes are meant for use at low speeds, would break and require a lot of maintenance, would pose problems for emergency vehicles, and are generally not accepted under highway standards.

In the past few years, some states, including Arizona, have lowered the height of their wrong-way signs to be closer to eye level. Finley and other researchers at the transportation institute found in a recent study that alcohol-impaired drivers tend to look not at the horizon but lower, at the pavement in front of the vehicle, Finley said.

Many states looked to San Antonio for what to do next. A police officer died there in 2011 after being hit by an impaired wrong-way driver. Shortly after, Texas became one of the first to install radar sensors and flashing signs.

The state quickly found that having just one radar sensor was not effective, as it caught too many false positives, said John Gianotti, a transportation engineer at the state transportation department’s San Antonio district. But the flashing wrong-way signs worked, so the state turned the radar off and left the signs, Gianotti said. Since then, the average rate of wrong-way drivers entering the highway where the system is installed has fallen by about 29 percent.

San Antonio, along with Rhode Island, has since started testing other systems that use radar to detect drivers at multiple points. Rhode Island’s, like Arizona’s, also alerts law enforcement and highway officials, who can change message boards to warn other drivers, and tracks the vehicle.

Arizona’s new system is different in that it uses thermal cameras, not radar, to detect vehicle movement. Thermal cameras are a newer technology that shows promise and may be more accurate than other detection systems, said Doug Nintzel, a spokesman for the state’s department of transportation. Arizona officials believe they are the first in the nation to test it out, he said.

There may be an additional solution, Finley said, in the next generation of road technology. The Texas Department of Transportation funded a research project completed by Finley and other researchers at Texas A&M Transportation Institute that looked at how technology inside vehicles could both alert wrong-way drivers of their error and warn other area drivers and police. 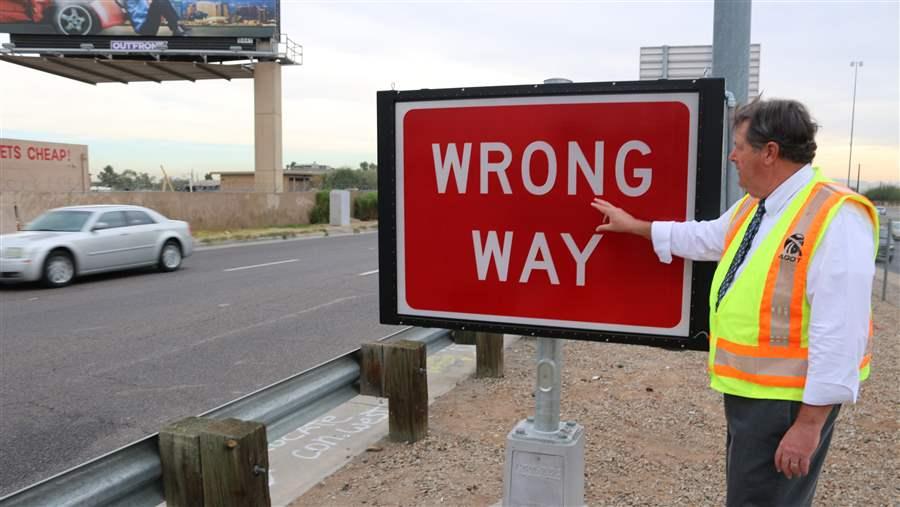 Arizona Department of Transportation spokesman Doug Nintzel points out the backlit feature of a newly installed sign that lights up when a wrong-way driver approaches. The state is one of many to use technology to combat wrong-way driving.

State officials say much of the problem is beyond their control because so many of the drivers are impaired.

Officials in Florida, Texas and Rhode Island said their data show wrong-way driving hot spots on highways near bars and restaurants, and the crashes spike in the hours around closing time.

The problem is that drunken driving is somehow still socially acceptable, Halikowski said.

“If we can make it an unpopular thing to do — much like smoking in a day care — perhaps that will keep impaired drivers from getting on the road in the first place,” he said.

Arizona officials already were studying how to address the problem with technology in 2014 when a series of wrong-way crashes occurred in one month. After another spike in crashes this past spring and summer — including one killing three young adults on Good Friday — state officials accelerated the installation of the new system. The system is still being installed and tested, and is set to be completed by early next year.

So far this year, 18 people have been killed in 56 wrong-way crashes on state highways, according to the state’s Department of Public Safety. Officials say that’s an increase from past years, though the comparison is hard to measure precisely because the state recently changed the way it tracks crashes.

In the April crash, the wrong-way driver’s blood alcohol content was more than twice the legal limit. Concerns about impaired drivers are growing as more people become addicted to opioids and heroin. Any overindulgence, and drivers start to lose their judgment, Halikowski said.

The average blood alcohol content of wrong-way drivers in Arizona is more than .18, said Col. Frank Milstead, director of the Arizona Department of Public Safety. The legal limit is .08. Milstead has been outspoken about what he thinks is the real solution to preventing wrong-way driving — eliminating impaired driving.

Staffing of state and city police departments has taken a major cut in recent years, Milstead said, so police aren’t catching as many intoxicated people before they make it onto the highway.

“There is only so much we can do in the engineering department,” St. Martin said. “The rest is on the driver.”