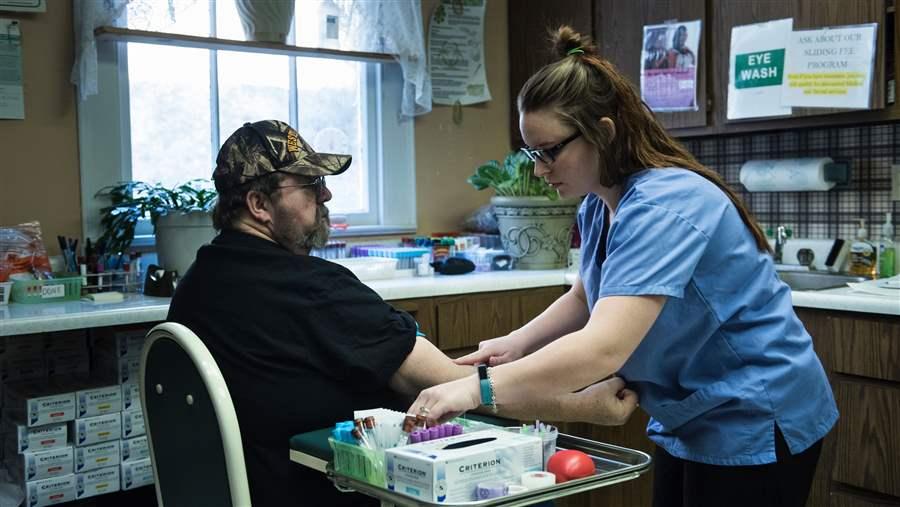 A patient has blood drawn in March at the Community Health Center of NE Wetzel County in Burton, West Virginia. Congress has failed to renew funding for community health centers.

Unless Congress provides funding before the end of the year, many of the nation’s 9,800 community health clinics will face service cuts or closure — potentially crippling a vital part of the health system that provides care in poor and underserved communities across every state.

And the fallout could mean the loss of more than 160,000 jobs and a hit to state economies of more than $15 billion as staff cutbacks and layoffs ripple through the country. California alone could lose up to 15,841 jobs and nearly $1.7 billion next year.

Congress’ inaction on funding community health centers comes just as its Republican leadership and the Trump administration continue their attacks on the Affordable Care Act, which are expected to result in higher health care costs for states, fewer people insured and rising premiums for many of those who are.

Across the country, the clinics serve 27 million people and, without the funding, as many as 2,800 clinics could close next year, leaving as many as 9 million patients without access to regular health care, according to the U.S. Department of Health and Human Services.

The problem for health centers extends beyond the funding they are waiting for Congress to provide, though. The situation is actually worse.

Congress also failed to reauthorize two related programs, the National Health Service Corps, which provides scholarships and loan repayment funds for medical providers who agree to practice in medically underserved areas, and Teaching Health Centers, which train medical residents to work as primary care physicians in those same areas. The total for those programs amounts to about $370 million a year.

“We’ve got a triple threat happening to community health centers,” said Mitzi Moran, CEO of Sunrise Community Health, which provides medical, dental, and behavioral health care to nearly 40,000 patients in northern Colorado. About 65 percent of them live at or below the poverty line, Moran said.

Meanwhile, Congress’s failure to reauthorize the $14 billion-a-year Children’s Health Insurance Program (CHIP), which finances medical care for nearly 9 million poor children, threatens to punch another hole in the budgets of community health centers, where many of those children receive care. According to NACHC, patients in CHIP and Medicaid, the companion health care program for the poor, represent half the patients seen at community health centers. (CHIP provides coverage for children whose families earn a bit too much to qualify for Medicaid.)

State governments, which sometimes fill the gaps to provide health care for low-income communities, might soon face decisions about whether they can help keep their community health centers up and running.

Congress failed to meet its Sept. 30 deadline for reauthorizing the Community Health Center Fund, which had provided health centers with $3.6 billion a year over the previous two years.

And because Congress also hasn’t passed a new budget for the current fiscal year, another $1.5 billion for health centers also is endangered.

Together, those two funding sources represent nearly a fifth of community health centers’ revenues, according to NACHC.

Health centers are not expected to run out of federal dollars until January. But already some say they have frozen hiring, lost medical providers they had recruited or suspended building projects. In a survey of health centers conducted by the association this fall, 41 percent said they would have to lay off staff and nearly half said they would have to curtail operations if Congress doesn’t act.

The loss of money would be crippling to community health centers, which often serve impoverished areas and by law must take all comers, no matter their ability to pay.

Those who run the health centers say they fear that closures and curtailment of operations will mean more Americans will forgo routine medical care, allowing chronic health conditions like diabetes, hypertension, and asthma to worsen. Many patients will end up in emergency rooms and be hospitalized, adding costly services that could have been avoided if primary care had been available.

They also describe themselves as angry and mystified about Congress’s failure to address the budgets of all these health programs, which have long enjoyed strong bipartisan support. More than 150 Republican and Democratic members of the House of Representatives sent a letter at the end of October to House Speaker Paul Ryan and Minority Leader Nancy Pelosi urging reauthorization of the Community Health Centers Fund. The National Governors Association sent a similar appeal late last month. No action followed.

“I am so frustrated that there just doesn’t seem to be any urgency about this in Washington,” said Steven Miracle, CEO of Georgia Mountains Health Services, a small network of community medical and dental clinics in the Appalachian foothills in largely rural northwest Georgia.

Funding for the community health clinics and the other health programs got shunted aside as Congress wrestled with Republican attempts to repeal the Affordable Care Act and pass a tax bill. Congressional Republicans still hope to pass the tax bill before breaking for the holidays. Congress also has other pressing business, including a disaster relief measure. The question is whether it can get all that done and fund the various health programs.

“You hope Congress can get all that passed [this week], but it’s never been done before,” said Edwin Park, vice president for health policy at the Center on Budget and Policy Priorities, a Washington think tank.

Democratic U.S. Rep. Niki Tsongas of Massachusetts placed the blame on the GOP, which has tried to tie funding for community health centers to cuts in other public health programs. “Republican leaders in Congress have long ignored bipartisan calls to address directly reauthorizing community health center funding, rushing ahead instead with their tax overhaul plan,” she said.

Although centers will not see their federal grants run out before January, ill effects caused by the funding uncertainty already have begun.

Miracle said that Green Mountains has lost one doctor over the instability, and its board decided to freeze hiring. And a bank nearly balked over an agreed-upon refinancing arrangement. “I can tell you, it was a very uncomfortable conversation,” he said. If Congress doesn’t act soon, he added, he and his board will begin discussing layoffs and site closures in January.

Other community health centers report similar consequences. Ann Awalt, executive director of Community Action Corporation of South Texas, which runs seven centers in the rural, southern portion of Texas running below San Antonio to the Mexican border and the Gulf of Mexico, said the organization has canceled two capital projects, including plans to open a school health clinic in an elementary school in Falfurrias not far from the Mexican border. It also has put off a planned expansion of behavioral health services.

“I’ve been in this business since 1975, and I have never seen a more uncertain environment,” she said.

Mitzi Moran of Sunrise Community Health in Colorado said that unless the financial pipeline from Washington starts flowing again, she will have to cut back services and operating hours, or perhaps close clinics altogether.

But the effects could go well beyond clinical issues. A study from George Washington University released this month found that the failure of Congress to continue health center funding could result in the loss of up to 160,981 jobs across the United States, nearly 60 percent of them outside health care. The same report estimates overall losses to the economy as high as $15.6 billion in 2018.

Leighton Ku, a co-author of the study and director of the university’s Center for Health Policy Research, said that while the job losses in the clinics themselves will be severe, the economies of all states will feel a spillover effect. Job losses in health care result in less spending on goods and services by those former employees, which affect other industries as well. Similarly, if health centers postpone planned capital projects or refuse to enter into contracts, many businesses will experience losses.

“This is going to severely affect every state in the Union,” Ku said. “What makes no sense is that everybody loves this program and realizes that it saves lots of money. Cutting this off is cutting off your own foot.”