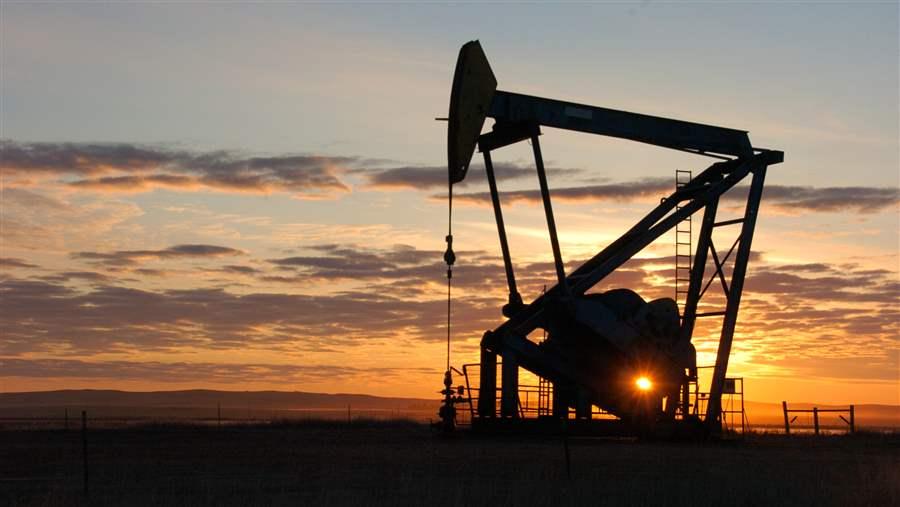 An oil derrick in Montana, one of the resource-rich Western states that would lose millions in royalty payments due to the expense of the tax bill.

As Congress speeds toward a vote on its massive tax overhaul, the lack of funding to cover the costs of the package means Western states are poised to lose nearly $1.3 billion in oil, gas and coal royalties.

Neither the House nor Senate versions of the bill are completely funded — Republicans argued economic growth spurred by the cuts would offset their cost. That lack of funding could ignite a 2010 federal law that requires across-the-board budget cuts, including withholding from states their portion of the money that oil, gas and coal companies pay to operate on federal land, when Congress approves a deficit-increasing measure. One prominent Western GOP senator insists that it’s unlikely Congress would allow that to happen, but fears in state capitals remain.

Western states rich in coal, oil and natural gas — among them Wyoming, New Mexico and Montana — already rely heavily on those industries and have had their budgets hit hard in recent years by falling energy prices. Several have been struggling to find millions needed to plug budget holes, and losing the 48 percent cut of the federal government’s royalty payments would be devastating, said officials across several states. The states’ congressional delegations cast their votes along party lines, with Republicans voting for the bill and Democrats against.

Furthermore, the cuts would hit schools and other social services particularly hard, as many resource-rich states use royalty payments to fund those systems. This comes as states fear the impacts of the tax overhaul’s other provisions, such as a cut in local and state income tax deductions.

“Triggering these cuts will put state budgets in the red and critical public services on the chopping block,” U.S. Sen. Jon Tester, a Montana Democrat, said in a statement. “On the heels of a catastrophic wildfire season that burned a hole in Montana’s budget, the last thing we need to be doing is handing out sweetheart deals to corporations that cost our state tens of millions of dollars.”

Governors’ offices did not respond to questions about how they would deal with the drop in revenue.

Montana is poised to lose $24 million in royalty payments if the tax bill goes through. That comes on the heels of a November special session that was called just five months into the state’s two-year budget cycle to address a $227 million hole. The state’s revenue department projected that in all, the state would lose $122 million under the Senate version of the tax bill.

Mike Kadas, the state’s revenue director, said the royalty payments go into the state’s general fund, about half of which goes toward education. Other large portions are directed to the university system, public health and human services, and the state’s correction system.

“Montana has been struggling to balance this budget for the last year or more, so $24 million is a big hit,” he said. “We’re all in the process of reducing services right now, so it just means more of that.”

Kadas said there is already talk about raising state taxes, and resource-producing counties, which get 25 percent of the state’s payout, would have to choose whether to reduce services or raise property taxes.

Chad Fenner, a county commissioner in coal-rich Big Horn County, Montana, which received $2 million in mineral royalties last year, said the predominantly Native American county already has had to raise taxes because of a lagging coal market. He said losing the payments would mean cuts to the ambulance service, senior center and fire protection, all of which were paid for with royalty money.

“I hate even thinking about it if that would happen,” Fenner said. “It wouldn’t be good for our county.”

The law that would trigger the cuts, the Statutory Pay-As-You-Go Act, also known as PAYGO, requires across-the-board cuts to certain programs if legislation passed by Congress increases projected deficits. An analysis from the nonpartisan Office of Management and Budget determines the amount of the cuts. Congress can, however, vote to waive the effects of PAYGO, which is exactly what some Republicans are suggesting.

Max D’Onofrio, a spokesman for U.S. Sen. Michael Enzi, a Wyoming Republican, said there has yet to be a sequester under PAYGO because lawmakers have voted 16 times to waive the required cuts.

“Senate Republicans will work to prevent cuts,” he said. “Congress made the PAYGO law and Congress can also waive its requirements, and they have done so before on a bipartisan basis.”

But not all are convinced it would be so simple.

“We’ve been told, ‘Don’t worry, Congress will fix this part of the deal,’ but I’ll believe it when I see it,” Kadas said.

Enzi’s home state of Wyoming would be perhaps the hardest-hit by withheld payments. The state got north of $664 million last year in royalty payments — the most of any state. It also faces a $770 million two-year deficit.

Mark Gordon, the state’s treasurer and a Republican, said the education system would be hit hard by the loss of mineral royalties. The money funds education first before flowing to other priorities.

Royalty payments aren’t just returned to the states to compensate for natural resources — the government has an obligation to offset the costs of development by funding schools, roads and other needs in impacted areas, Gordon said. “There was a recognition that where development occurs, the proper goal for the government was to use those royalties to take care of some of those impacts.”

New Mexico expects to receive about $455 million for this fiscal year, according to Democratic U.S. Sen. Tom Udall’s office, and like other Western states, it has had budget problems due to falling energy prices. The state went through nearly all of its reserves over the past two years and is working to rebuild them.

Udall said the bill sets New Mexico “on a collision course for a huge budget cut.” Both U.S. senators from New Mexico sponsored an amendment to the Senate bill to exclude mineral payments from the cuts, but it did not pass.

“New Mexico can’t afford a $450 million budget cut, especially one that would slash the budget for public schools,” Udall said in a statement. “And New Mexico’s schoolchildren shouldn’t have to pay for tax cuts for the top 1 percent.”

New Mexico state Sen. John Arthur Smith, the Democratic chairman of the Senate Finance Committee, recently penned a letter with his counterpart in the House to New Mexico’s congressional delegation warning of the impact of losing the mineral royalty payments.

The cuts would “go right to the heart of education,” he said. Republican Gov. Susana Martinez’s pledge to not raise taxes leaves the state with few other options, but Smith said increasing taxes is what the state needs to do to untie itself from the volatility of the oil market.

“You get labeled politically that you just want tax increases, but I just want reliable revenues,” Smith said. “This roller coaster thing is not a lot of fun.”

The Western Governors’ Association, which represents the governors of 19 states, said in a policy resolution that the federal government has no discretion over this money and that payment to the states is the only authorized use for the revenue.

“There’s no question whenever you have to deal with giving something away and taking something back, whoever is on the short end of that stick is going to feel it,” said Gordon in Wyoming. “And PAYGO rules, if they apply to royalty payments to states, are going to be pretty devastating to us.”

The lack of sufficient funding for the tax bill being considered by Congress would trigger a law known as PAYGO, which stops mineral royalty payments to states, among other things.