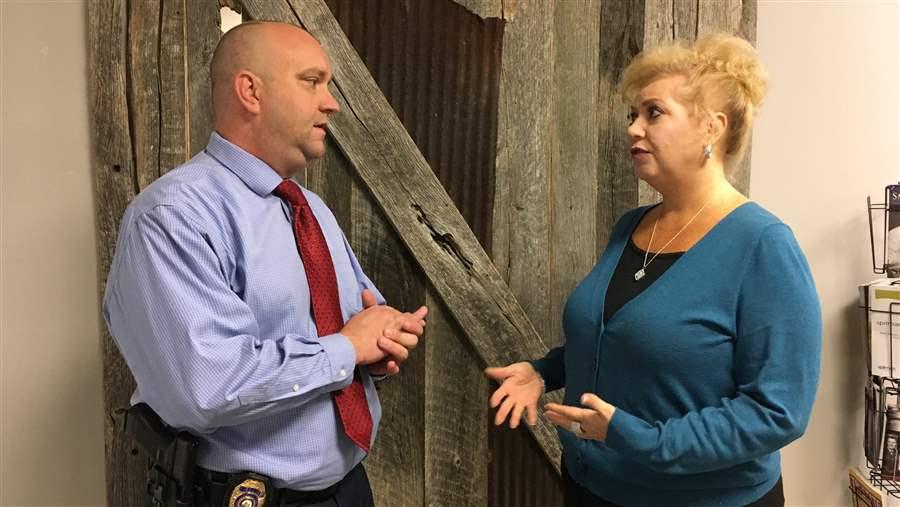 CHARLESTON, W.Va. — Police officers in the drug unit here have ended their routine of arresting every drug user who shoplifts and steals weed whackers off porches to pay for their drug habit. Instead, they’re referring some of them to treatment, leaving more time to pursue major drug arrests.

The approach seems to be working. In the last three years, more than 170 low-level drug offenders have decided to sign up for addiction treatment instead of being taken into custody, and more than 70 percent of them have turned their lives around.

Like much of the rest of the nation, West Virginia has a severe shortage of behavioral health professionals who can help people beat their addictions to drugs and alcohol.

And with hundreds of people outside of the criminal justice system on waiting lists for treatment, county mental health officials are hesitant to make room for drug users when not enough beds and treatment services are available for existing clients, according to Jim Johnson, West Virginia’s recently appointed drug czar.

In 2015, the state invited all of its mental and behavioral health contractors to participate in launching new LEAD programs. So far, none have responded, Johnson said. To generate interest, he and members of the Charleston police force have taken their proposal on the road, inviting addiction treatment representatives to hear what local police departments and Charleston’s police force have to say about the benefits of the program.

Huntington, the state’s second-largest city, started a LEAD program two years ago that has failed to take off, and Martinsburg and two rural counties may start programs next year. To be successful, they need to find a point person within the treatment community who will ensure that police referrals are given top priority. And so far, no one has stepped up, Johnson said. 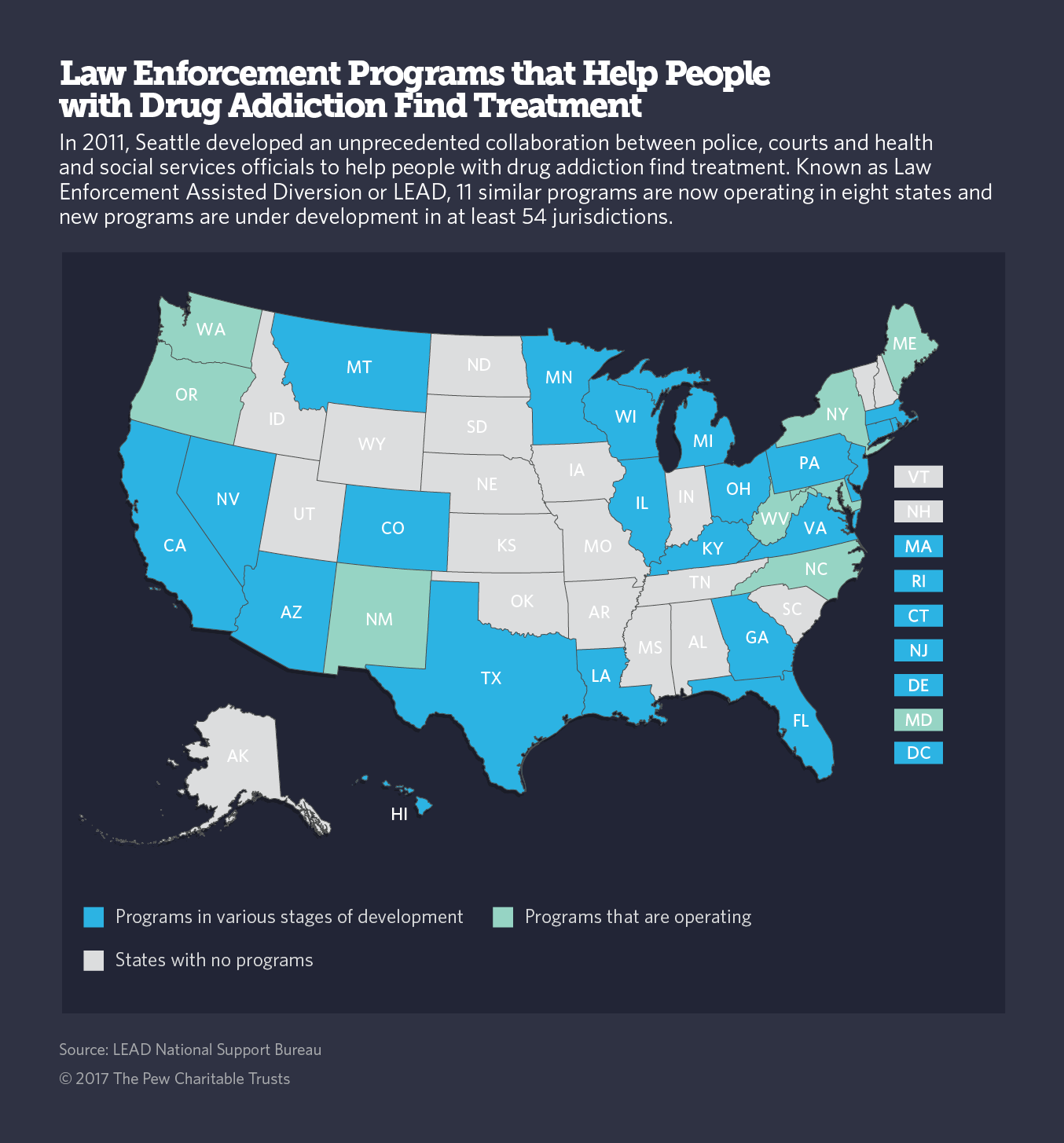 Launched in Seattle six years ago, the LEAD program was initially driven by critics of racial disparities in drug arrests who were challenged by police to come up with a better solution. Civil rights leaders and health advocates argued that the only way to break the cycle of repeated petty crimes and arrests was to provide housing and mental health and addiction services to people who needed it most.

At that time, it was the police department that was reluctant to sign up. Seattle’s prosecutors and social service providers were early champions of the proposal, Daugaard said. But police officers were concerned that their views on who should be allowed to join the program and who needed to be arrested would not be respected, she said.

Within a year, though, most police officers were convinced that the program made sense and that cooperation between officers on the street and public health and social workers was possible, Daugaard said.

In the Seattle program’s six years, more than 550 people with drug addiction and mental illness have signed up for services to help them exit the criminal justice system’s revolving door and at least 60 percent have succeeded in avoiding re-arrest, according to an analysis of the program by the University of Washington.

Robert Childs, director of the North Carolina Harm Reduction Coalition, said the state has always had a shortage of mental health and addiction treatment services. So when police departments decided to start LEAD programs, they called on his organization to coordinate behavioral health and other social services.

Now, when an officer identifies people who want help with their addiction or mental health condition, a staff member at the coalition works with local treatment facilities to arrange detox, locate a bed, and set up housing and other needed services. North Carolina has established LEAD programs in Fayetteville and Wilmington, and is slated to launch new programs in seven additional jurisdictions this year.

In West Virginia, Charleston’s program targets drug users who have been arrested for selling drugs or stealing to support their habits, and who have no violent crimes on their record. The goal is to immediately get them into treatment.

It’s essential to respond to police referrals within hours, not days, said Dana Petroff, director of addiction services for Prestera Center, the Charleston police department’s partner in the LEAD program. She takes calls from some 30 police officers who have her permission to call any time, day or night, seven days a week.

“We learned the hard way that waiting until the next day to get a drug user into treatment just wastes everyone’s time,” she said. “Unless you can take them immediately, they can change their mind, use again or disappear.”

When the program began in 2014, a group of police officers conducted a one-day warrant sweep of 75 drug users who had been identified as candidates. Twenty of them agreed to get into treatment.

On the day of the sweep, Petroff waited in the police station as the officers brought in the program’s first participants. Her job was to screen them for drug use and admit them to local treatment centers.

After that initial roundup, officers approached new candidates on the streets and offered them a chance to enter the program. But after word spread, drug users who wanted to get off the treadmill of repeated arrests and jail stints started approaching officers on their own.

Heath Johnson, 30, was one of them. A college graduate with a job at a nearby power plant, Johnson said he got hooked on opioids after a doctor prescribed Lortab for pain associated with a foot injury. He said he was a functioning addict for about a year after that. But once he lost his job at the plant and moved back to the Charleston area, he said he started injecting heroin and his life quickly spiraled out of control.

With multiple arrests for possessing and selling heroin, Johnson said he knew his life would only get worse. So he asked an officer on the street about the LEAD program and within a couple of hours was admitted to a local facility for detox and addiction treatment. 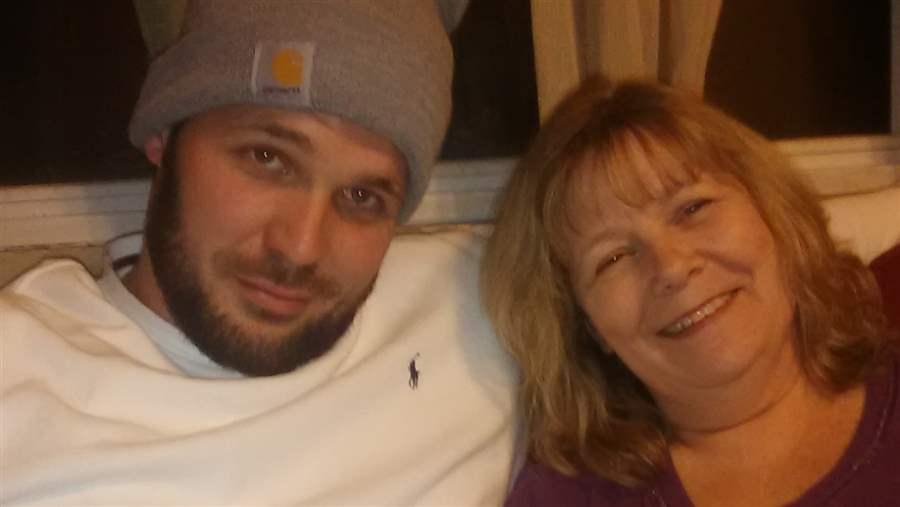 Heath Johnson, 30, poses with his mother. After multiple arrests for drug-related crimes, Johnson signed up for a LEAD program in Charleston, and is now in recovery from heroin addiction.

“I’d tried to quit on my own many times but it only lasted for a few days or weeks,” Johnson said. “I thought about getting help but didn’t know who to call, and I didn’t have insurance or money to pay for it.” Petroff took care of everything, he said.

Now Johnson has a job, a car and a place to live, and he’s paid off most of his fines. “If you had told me a year ago I would be where I am now, I wouldn’t have believed it,” he said.