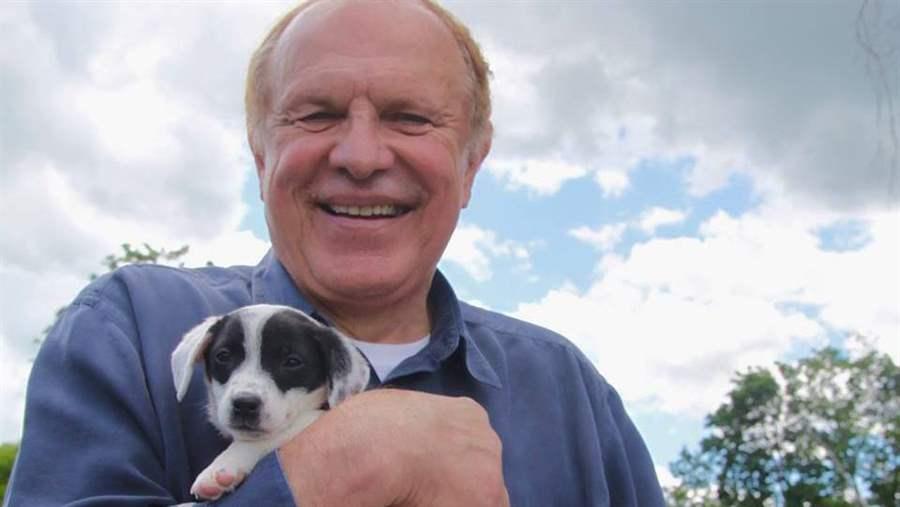 When the Humane Society’s John Goodwin visited a large dog-breeding facility in North Carolina last year, the smell of ammonia from urine and feces inside the building was so strong he got sick and had to scurry outside.

The dogs, which ranged in size from teacup poodles to Labrador retrievers, were held in wire cages, causing severe sores on their feet, he said. Two of them had such advanced gum disease that they had lost their lower jaws, and “the tongues basically had to take the place of the lower jaw” so they could eat.

It’s stories like these, and pictures and videos of “puppy mills” that flood the internet, that are fueling growing campaigns to ban or restrict the sale of dogs and cats in retail stores, in an effort to curb the large-scale commercial operations that provide many of the pets to retailers.

The number of local ordinances across the country banning the sale of pets from commercial breeders, defined as large operations that raise pets for wholesale distribution, has grown from about a hundred last year to about 250. “The momentum is there,” said Goodwin, senior director of the Humane Society’s Stop Puppy Mills campaign.

California this fall became the first state to outright ban sales of commercially raised animals in retail shops — a new success for activists working across the country to transform the way pets are taken in by families.

Although the U.S. Department of Agriculture regulates large-scale commercial breeders, animal welfare activists say that as shelter adoptions continue to rise, consumers are becoming more aware of the unsafe, unsanitary conditions in which commercially bred pets are sometimes raised.

In California, at least 36 municipalities, including Los Angeles, San Francisco and Sacramento, approved banning the stores from selling pets before the California Legislature acted.

“The goal was always to take this to the state level,” Oreck said, noting that more than 50 jurisdictions in Florida more than a hundred in New Jersey have restrictions on pet sales, making those states ripe targets. “We’ve been working locally throughout the country.” 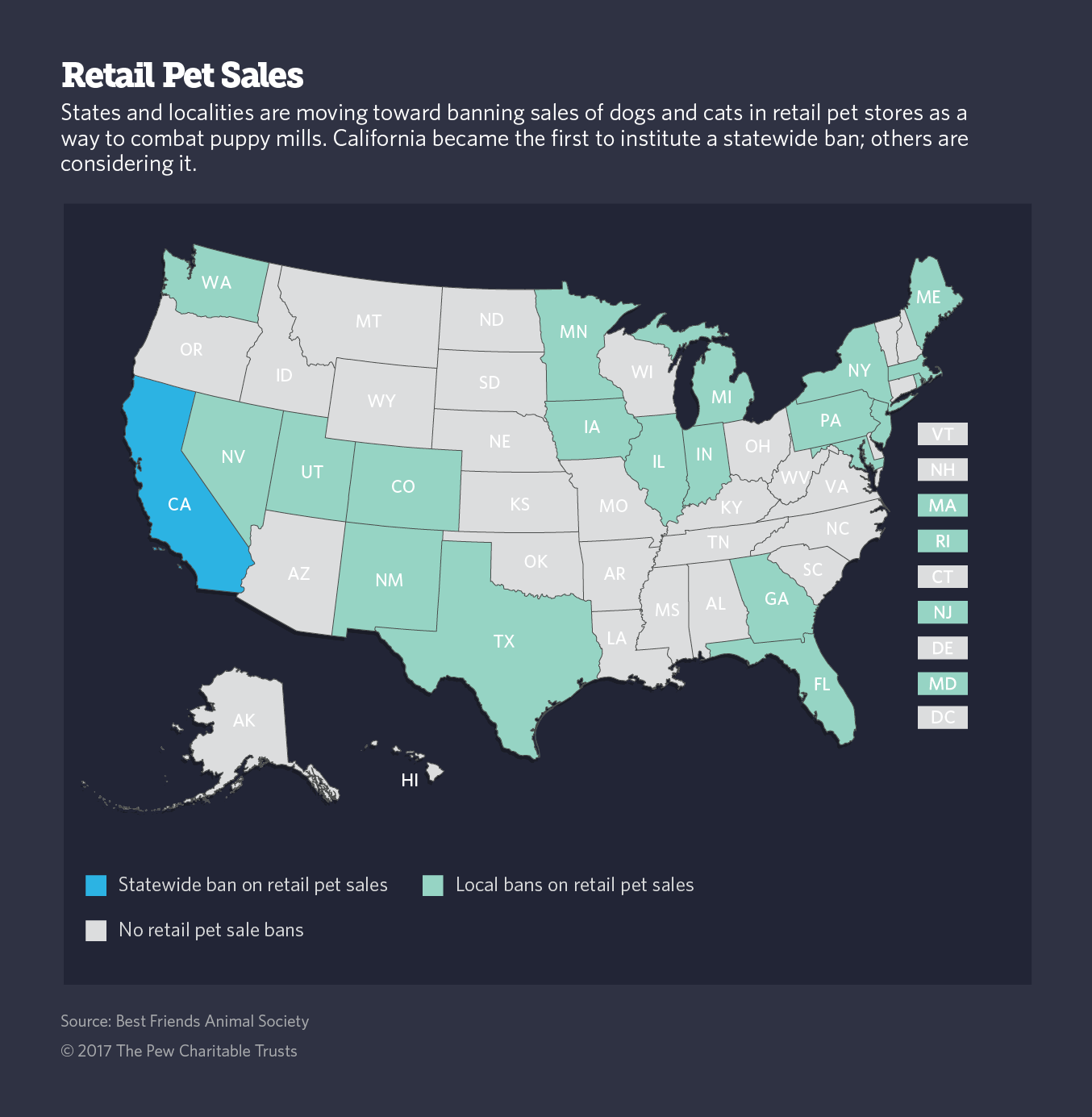 Animal welfare activists say pet stores buy puppies and kittens from commercial breeders without regard to the conditions under which they are raised.

They say the pets often are sick or injured, unbeknown to purchasers who take the pets home only to discover devastating — and expensive — illnesses and congenital defects. The American Society for the Prevention of Cruelty to Animals, a New York-based nonprofit, defines “puppy mills” as those commercial breeders that prioritize profit over animals’ well-being.

But pet store owners contend that animal welfare activists simply want to put them out of business, preferring that buyers get their pets from shelters or rescue organizations. The owners also contend that not all families can travel to smaller breeders for pets or want to adopt from a rescue group, particularly if they are looking for a particular breed of dog.

The Pet Industry Joint Advisory Council, a trade group that represents pet stores, breeders and suppliers, acknowledges there are a few “bad apples” in the industry, but says most stores and breeders are regulated and safe.

They say overregulation would lead to store closures, pointing to a Petco store in Cambridge, Massachusetts, that will close in January, after an ordinance prohibited sales of commercially bred pets. “This will hurt the ability of licensed commercial breeders to provide healthy pets to pet lovers,” said Mike Bober, president of the trade group, of the growing opposition to the sale of commercially bred pets.

Both his group and the Humane Society agree that only about 4 percent of dogs and 1 percent of cats are bought at stores, which Bober said is not enough to affect shelter and rescue numbers.

“Pet stores provide an effective middle entity — many pet lovers cannot travel to a breeder due to distance or price,” Bober said in an email. “Pet stores also are trusted partners for grooming, pet products, vets and other pet owner needs.” The California law, he said, “was a matter of activists desiring to limit consumers’ pet choice to rescue or shelter-only animals, even though bad apples exist across the companion animal spectrum.”

Other states also have been crafting restrictions on commercial pet sales.

Maine’s Legislature passed a bill in 2015 that prohibited new pet shops from selling animals sourced anywhere other than a rescue organization or in the pet shop itself, which would include commercial breeders. But Republican Gov. Paul LePage, who owns a dog named Veto, vetoed the measure, saying it “simply creates more anti-business red tape. The true thrust of this bill is regulating pet shops into eventual oblivion.” The Legislature failed to override the veto.

But Portland, Maine, in 2016 approved its own ordinance banning sales of dogs and cats in pet stores. And Bar Harbor just last week approved a similar ordinance.

Katie Hansberry, Maine state director for the Humane Society, noted it’s a “tough political climate” in her state right now to get statewide animal welfare bills passed. “But it’s an opportunity for local communities to take on issues,” she said. “After a number of municipalities pass similar ordinances we will go back to the state and hopefully see it pass statewide.”

New Jersey in 2015 enacted a law requiring pet stores to tell customers where they get their animals. But unless customers actually are checking out the source, advocates say, that law doesn’t work well in practice.

Last year, the Legislature passed a bill designed to strengthen that law, prohibiting pet stores from getting dogs or cats from any breeder that had three or more USDA violations against them, but Republican Gov. Chris Christie vetoed it, saying the bill went too far and that it was too soon to deal with pet store laws again. The closely divided Legislature did not override the veto.

New Jersey state Sen. Raymond Lesniak, a Democrat, is readying similar legislation for the 2018 session. And although he is retiring, he is lining up new sponsors. With the election of Phil Murphy, also a Democrat, as governor, Lesniak hopes the bill will become law.

He said an earlier version of the 2016 bill would have been even more restrictive, banning sales of dogs and cats at pet stores unless they came from rescue organizations. “That got a lot of pushback and didn’t pass,” he said. “We animal supporters in New Jersey basically want to shut down these bad breeders.”

Massachusetts is considering a bill that would ban all sales of dogs and cats in retail pet stores unless they come from shelters, not commercial breeders.

State Sen. Patrick O’Connor, a Republican, said he hopes his bill will end the practice of selling commercially bred dogs in the state. Boston approved a ban last year; Cambridge and Stoneham, this year. He said only a dozen or so shops in the state are still selling puppies and kittens.

An investigation by a Massachusetts news organization, MassLive, singled out one store in West Springfield, the Puppy Place, saying customers had returned pets after they were discovered to be sick. Store owner Brady Carty disagreed, saying in an email that only 5 percent of the 8,700 puppies sold over the past decade have become ill, and that the dogs have a two-week warranty against illness. He also said the store buys its puppies from USDA-licensed breeders.

“Without the sale of live animals, we could not operate our stores successfully,” Carty wrote in an email. “We could not compete selling only pet food and supplies with giant chains such as Petco and PetSmart and other retailers including Walmart and grocery stores. Our live animals are the main source of income and any add-on supplies are generally a bonus.”

He also said selling rescue dogs is problematic. He pointed to a store he operates in Connecticut that sells both rescues and bred puppies. He said the bred puppies are 10 times more popular and noted that rescue dogs, whose background is unknown, also are susceptible to illnesses.

“You see puppies in the window and you put one under the Christmas tree,” he said, adding that families deserve to know whether the pets are healthy before they become part of the family. “We should not be breeding dogs and cats for retail sale. Hopefully the stores will partner with shelters and rescue organizations so dogs in shelters will get a home.”