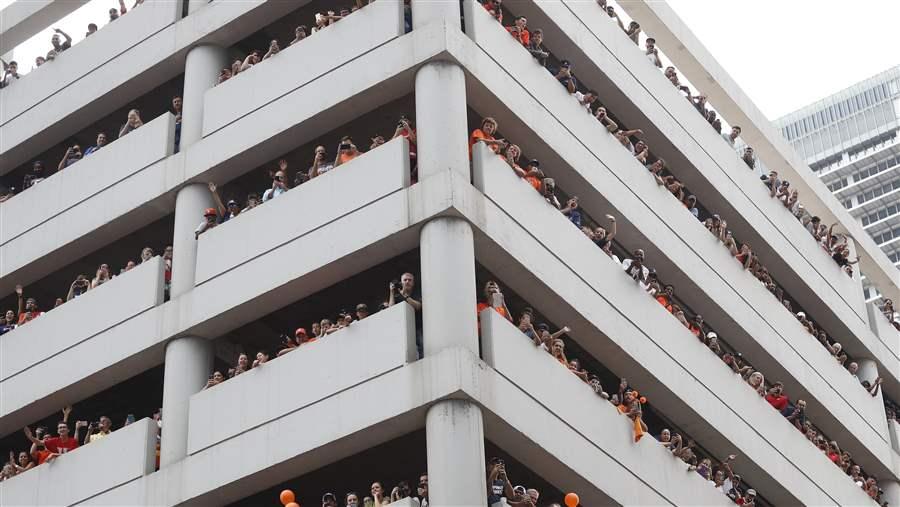 Astros fans watch from a parking garage during a parade honoring the World Series champions in Houston. The rise of ride-hailing services and autonomous cars may make huge downtown garages a thing of the past.

Editor's note: This story was updated Dec. 14 to correct information about the bond approved by Atlanta voters in 2015.

For decades, providing downtown parking was a top priority for urban planners. Huge parking garages for commuters’ cars occupied prime real estate that otherwise might have been used for housing, stores or offices.

But ride-hailing services and autonomous cars are going to revolutionize parking in cities across the country — in garages, in lots and along curbs. By 2030, 15 percent of new cars sold will be totally autonomous, according to one estimate. One in 10 will be shared. And as it becomes easier for people to summon shared or autonomous cars when they need them, fewer people will want to own their own vehicle, meaning fewer cars overall.

The bottom line: We’re going to need much less space to store cars. Some cities are gearing up to take advantage of the shift.

“Urban parking lots are dead or dying, and how we use the curb is changing,” said Rich Barone, vice president of transportation for the Regional Plan Association of New York, New Jersey and Connecticut. The RPA released a report in October urging cities to “get ready” for autonomous vehicles. It predicts that by 2045, 70 to 90 percent of all cars in major urban areas could be autonomous.

Parking in downtowns is going to “morph from being big massive surface lots and garages to much smaller areas configured for pickup and drop-off of autonomous vehicles,” Barone said. “Cities will be more walkable, more people-friendly, and there will be more space for parks and other amenities.”

Joe Schwieterman, a professor of transportation at DePaul University in Chicago, agrees. “The whole view of the function of streets has had a metamorphosis,” Schwieterman said. “It’s made us rethink the opportunity cost of plopping a parking garage in prime downtown property.”

In addition, curbside parking will be redesigned. The National Association of City Transportation Officials suggests in a recent study that reuses could include bike parking, small green spaces, called “park-lets,” for pedestrians to enjoy, and pickup and drop-off areas for driverless vehicles and ride-hailing services like Uber and Lyft.

“We always thought of curbs as the place where parking meters are, but it’s a different space now,” said Faye DiMassimo, general manager of Renew Atlanta, a 5-year, $252 million infrastructure bond approved by voters in 2015. “Now we find sidewalks and trails, and technologies like ride-sharing and autonomous cars pulling up and dropping off people. The curbside has to be managed differently than in the past.”

Roadways are getting updates too. In September, Atlanta unveiled its first “smart road” to install technology for traffic control and eventually driverless cars, and it tested a driverless transit shuttle. The $3 million North Avenue Smart Corridor Project has five miles of adaptive traffic signals and other sensors that make adjustments based on traffic demand, communicate with autonomous vehicles, and open traffic signals to emergency vehicles like fire trucks and police cars, DiMassimo said.

As urban planners start to shift focus from making it easy to park a car downtown to making it harder, cities such as Buffalo, Miami and Seattle are reducing or dropping their minimum parking requirements for new developments. Instead, they are capping the amount of parking that developers may provide.

Arlington, Virginia, a suburb of Washington, D.C., just approved reducing the number of parking spots it requires for housing developments based on how close the developments are to its mass transit system. The requirements will drop from 0.8 parking spaces per housing unit to 0.2 for units close to the Metro subway system.

One hope is that allowing developers to forgo parking lots will let them build more affordable housing.

“Affordable housing is a really big issue, and Arlington is a very expensive place to live,” said Dennis Leach, Arlington County’s director of transportation. A single underground garage space can cost $35,000 to $45,000 to build, he said. Underground parking in denser urban areas can cost much more.

“Oakland realized that its conventional approach to parking was failing in every way,” said Jeffrey Tumlin, principal of Nelson\Nygaard, a San Francisco-based transportation consulting firm that helped Oakland design the regulations.

“Drivers are realizing it’s cheaper to take an Uber than drive,” he said. “Developers see autonomous cars coming and think, ‘Am I really going to build this garage at $70,000 a space?’”

Donald Shoup, a professor of urban planning at UCLA and the author of “The High Cost of Free Parking,” notes that in Los Angeles, parking takes up 40 percent more land than all the freeways and streets combined. Shoup predicts that parking garages and surface lots in his city, and many others, will be torn down and redeveloped into housing, office and retail space.

The private developer of one 475-unit apartment complex in downtown Los Angeles is taking another approach: building a garage that is designed to be converted into shops, a gym and a theater when it is no longer needed for parking.

The garage, in the city’s trendy Arts District, will hold 842 vehicles, but Virginia-based AvalonBay Communities Inc. is constructing it with level rather than inclined floors and floors that can be easily removed so it will be ready for a second life. AvalonBay, one of the country’s biggest apartment developers, operates nearly 84,000 apartments in 10 states.

“What happens to all this parking we are building today if the demand decreases?” said Mark Janda, senior vice president of development for Avalon in Southern California. “One of the things we can do is to make these parking garages adapt.” Other regions in his company are considering new parking solutions too, he said.

Parking in the United States is “an addiction,” said Tumlin of Nelson\Nygaard. So even as technology makes parking less essential, some cities are giving residents an extra push to kick the habit.

To discourage downtown parking and to push people toward options other than driving their own cars, cities such as Boston, San Francisco and Seattle are experimenting with parking meters that charge more at peak times. The city council in Washington, D.C., is debating new rules that would require companies that provide free parking for their employees to also provide free public transit passes and bike parking.

In Columbus, Ohio, downtown business owners, who want parking spaces freed up for customers, are chipping in $5 million initially for a program to pay for their workers to take a bus, rather than their cars, to work. More than 40,000 workers would qualify starting in June. A three-month test last year resulted in 12.2 percent of downtown workers taking the bus, nearly double the 6.4 percent who did before.

“These were people who had ingrained habits of driving into work,” said Cleve Ricksecker, executive director of the Capital Crossroads Special Improvement District. “The owners are pretty jazzed.”