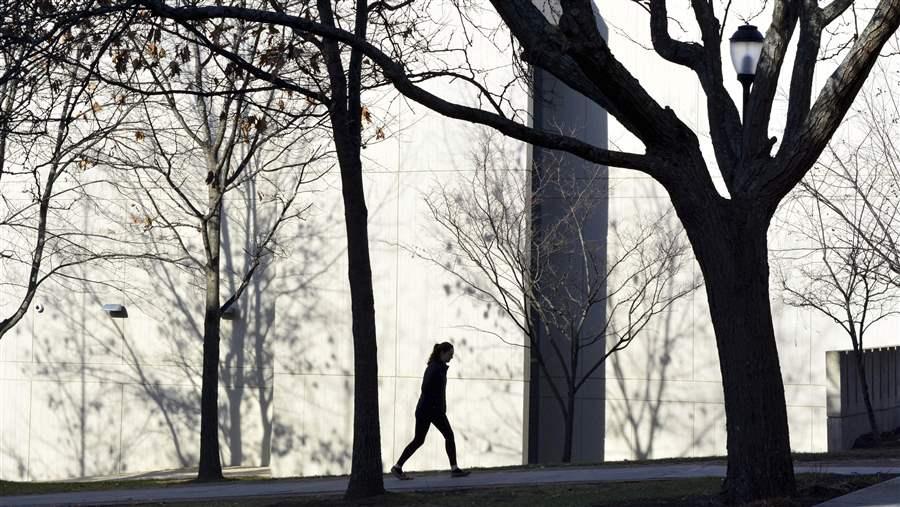 A lone student walks on the campus of the Massachusetts College of Liberal Arts in North Adams. Some states are giving foster youth more guidance and financial support to help them obtain college degrees.

Gillian Jones, The Berkshire Eagle via, The Associated Press

Since she was 2, Alexis Barries has bounced from foster home to group home to finally, a place of her own. She’s got dreams of becoming an attorney, and even started college early, at 16.

Eight years and five community colleges later, the Californian is still a freshman, working her way through school at an exceedingly slow pace, punctuated by a frustrating series of stops and starts, from financial aid snafus to housing mix-ups. Without an adult to help her figure things out, she says, the obstacles she encountered took on Kafkaesque proportions.

“I wasn’t prepared for college. I didn’t have parents or anyone to look up to or help me with my college experience,” said Barries, who lives in Stockton, California, where she now attends San Joaquin Delta College.

“I completely fell down.”

At a time when many parents help their children navigate every twist and turn of their academic lives, former and current foster youth have a particularly difficult path. If they don’t have a parental figure to guide them, they’re often left on their own to maneuver through the maze of college applications and financial aid paperwork.

Some states are stepping up efforts to give them more guidance and support.

In October, California Gov. Jerry Brown, a Democrat, signed into law a program providing additional support services for foster youth in community colleges, including assigning a counselor to entering students. This year New York will spend $4.5 million to help foster youth with tuition, books and living expenses, up from $3 million last year.

And in September, four Pennsylvania universities launched a public-private partnership to recruit foster youth who want to go to college and support them with year-round campus housing, food pantries, counseling and school supplies.

“There are all these hurdles that foster youth have to go through,” said California state Sen. Jim Beall, a Democrat, who sponsored the California legislation.

“There are no parents, no one to help them. They drop out and do other things.”

And foster youth who make it to college are much more likely to drop out before earning a degree, even compared with first-generation college students.

Many foster kids have moved from high school to high school, aren’t academically prepared for the rigors of college, and have to play catch-up with remedial classes, extending their time in school. Many of them don’t know about federal financial aid they might qualify for, and struggle to find stable housing.

“We assume if you throw a little money at the problem that takes care of it,” Walsh said. “But what universities and colleges are finding out is you need more than that.”

Even students who come from families of limited means have advantages that foster kids don’t, Walsh said. For example, he said, a student who can’t drive his car to class because his tires are shot may be able to get a ride from his parents, even if they can’t afford to give him $300 to buy new tires. Foster youth don’t have that kind of support.

There’s no federal requirement to provide foster youth with help in college, which leaves it up to the states. California, where a quarter of foster youth are 16 and over, has taken the most aggressive approach. Since 2015, the state has offered $15 million in community college assistance for current and former foster youth aged 16 to 26.

In each of the past three years, California has enacted legislation to tackle some aspect of the problem, such as providing grants for books and supplies, mental health services or child care assistance. (Foster youth are more likely to become teen parents.)

The most recent measure requires every county child welfare agency to assign somebody to assist foster youth with applications for college and vocational school and for financial aid. It also doubles the number of community college districts with on-campus support programs from 10 to 20, and streamlines the financial aid verification process for foster youth.

Help with the verification process would have made a big difference to Barries, who couldn’t find the documentation she needed to verify that she was, indeed, in foster care.

“It was so frustrating and overwhelming,” said Barries, who takes early morning classes before she goes to her full-time job in the information technology department of a foster home agency.

It is now widely accepted that young brains aren’t fully developed until around age 25, and that youth need a longer transition into adulthood because they don’t fully understand the consequences of their actions.

Meanwhile, the number of youth in foster care continues to rise, fueled in part by the increase in parental substance abuse, according to a report released in November by the Children’s Bureau at the U.S. Department of Health and Human Service’s Administration for Children and Families.

“We’ve got to do so much more to lengthen the runway” to successfully launch foster youth, said Amy Lemley, executive director of John Burton Advocates for Youth, a California nonprofit.

Generally speaking, foster youth age out of the system at 18, with no backup services to ease them into adulthood. That can make for an abrupt transition. But thanks to a 2008 federal law, states can extend foster care benefits to youth up to age 21 and receive federal funding for it. So far, 21 states have expanded benefits.

The support is separate from targeted efforts to help foster kids get through college, but it can play a huge role in their college prospects.

“Who’s that supportive adult who’s going to help them when they’re stressed out or they run out of money and don’t have food?” said Sandra Gasca-Gonzalez, director of the Annie E. Casey Foundation’s Jim Casey Youth Opportunities Initiative, which supports youth aging out of foster care. “That can make or break their educational journey,”

No adult told Barries she was eligible to live on campus, rent free, so she signed a lease on a place off campus, and then had to work extra hours to pay the rent, which made it almost impossible to keep up at school.

“My social worker was so focused on making sure my independent living skills were up to par and that I had a job,” she said. “Going to college wasn’t on her list of things to help me with.”