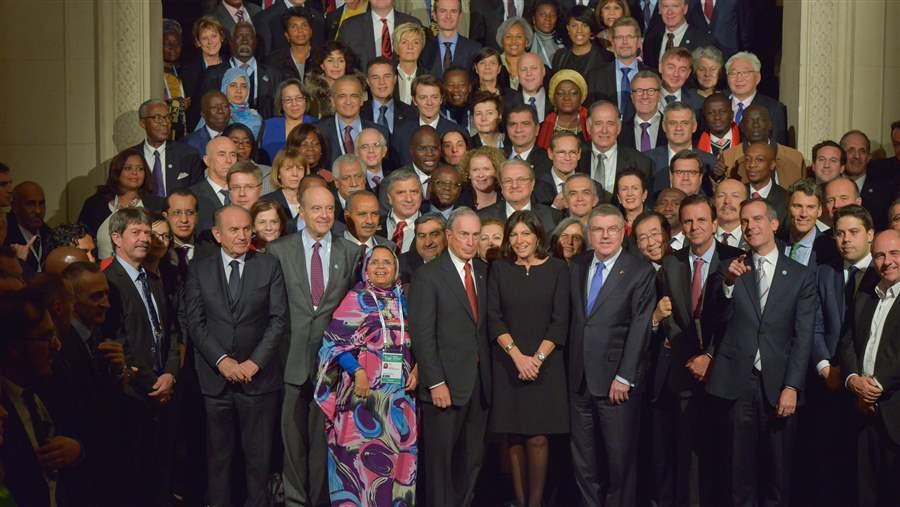 Former New York Mayor Michael Bloomberg (center), a UN special envoy for cities and climate change, and Paris Mayor Anne Hidalgo, pose with local leaders and mayors from around the world at the 2015 climate talks in Paris.

When President Trump decided to pull the United States out of the Paris climate agreement earlier this year, some American cities vowed to continue to do their part to reduce greenhouse gas emissions.

Now mayors of several U.S. cities — including Chicago, New York, Salt Lake City, San Francisco and Washington, D.C. — have joined an international charter on climate change. In total, 50 mayors from around the world signed the agreement Tuesday at a summit in Chicago.

"The Chicago Climate Charter represents tens of million residents who are committed to confronting climate change head-on,” Chicago Mayor Rahm Emanuel said in a statement announcing the new agreement. “Even as Washington fails to act, cities have the power and will to take decisive action to protect our planet and the health and safety of our residents.”

The charter’s signatories pledged to achieve a reduction in carbon emissions in line with the Paris agreement; quantify, track and report emissions; and support partnerships with state, federal, and private sector entities, among other goals.

Cities will need help from partners, particularly states, if they’re to achieve meaningful emissions reductions. Many cities may be hamstrung by Republican governors and state legislatures that don’t support policies that would reduce fossil fuel emissions.