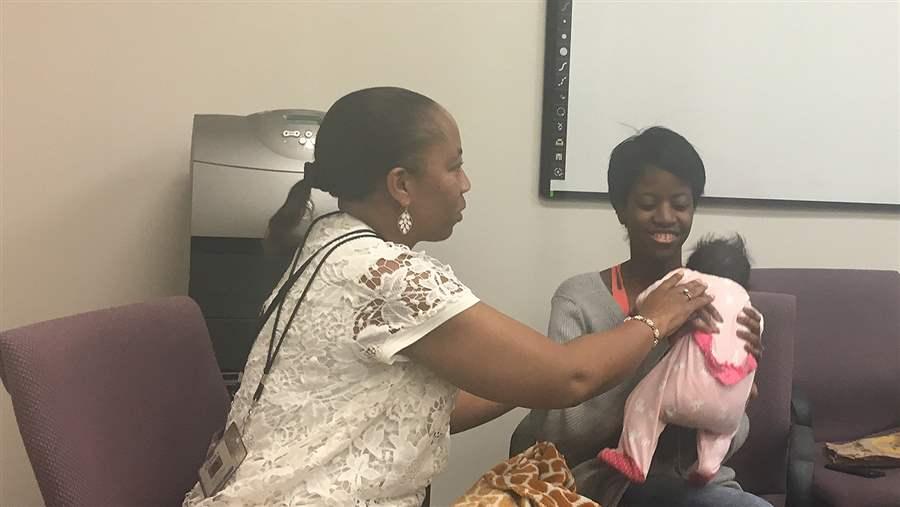 Hannah White, right, with her five-week old daughter Maddilyn, meets with case manager Denise Duckett last month during her postpartum visit in Asheville, North Carolina. White was a patient in a statewide network of pregnancy medical homes that serves expectant mothers in Medicaid. The program has produced encouraging results including lower rates of preterm births and Caesarean deliveries.

ASHEVILLE, N.C. — When Hannah White first showed up at the Mountain Area Health Education Center here three years ago, she was in trouble.

She was 20 years old, a couple months into her first pregnancy and on the run from an abusive husband in Texas who already had broken her ribs in an attempt, she said, to kill her unborn child. She also has a form of hemophilia which prevents her body from producing platelet granules that stem bleeding. That disease had robbed her of her Malawian mother when Hannah was three months old, which ultimately led to her adoption by American missionaries.

“I was a mess,” White recalled when she first showed up at MAHEC, which serves a 16-county area of western North Carolina. “I was worried about the abuse and was having this bleeding and afraid I was going to die or lose my baby.

MAHEC’s ob-gyn program is part of a statewide initiative in North Carolina that identifies low-income women whose pregnancies present a high risk to either the baby or mother. All the women receive care through “medical homes,” in which teams of providers work together to provide coordinated care.

The medical homes provide the most advanced obstetrical care, but they also seek to alleviate nonmedical circumstances that could put mother and child in jeopardy, such as addiction, domestic abuse and a lack of secure housing and healthy food. North Carolina’s program is the only statewide pregnancy medical home model in the country.

Among developed nations, the United States ranks last in maternal mortality and infant mortality, largely because of its high rate of untreated chronic disease and a decline in access to obstetrical care, particularly in rural areas.

But many think North Carolina’s approach could be the key to reversing that trend. The rates of low-birth weight babies (also a proxy for preterm births) and Caesarean deliveries are all lower among women participating in the program versus those who didn’t. North Carolina has reduced the rate of unplanned pregnancies, by educating new mothers about birth control and spacing babies. The state also has seen a decrease in racial disparity in maternal mortality (although part of that is the result of an uptick in white maternal mortality). Other states, such as Oregon, Wisconsin and Texas, have pregnancy medical homes, but North Carolina is the only one with a statewide program.

The Institute for Healthcare Improvement, an independent nonprofit health policy research organization in Massachusetts, calls North Carolina a leader in this area. Jeffrey Rakover, a senior researcher on maternal and infant health said the “well-defined and rigorous” program will likely become a model for other states.

North Carolina officials already have fielded inquiries from California, Michigan, Minnesota, South Carolina and Tennessee, according to Belinda Pettiford, head of the Women’s Health Branch of the state’s Department of Health and Human Services.

Rebekah Gee, the Louisiana secretary of health and an ob-gyn, said, “I think it’s one of the most exciting models in the country with very promising results on preventing premature births. It’s a model I always suggest people look to when they design their programs.” She said Louisiana is particularly interested in modeling North Carolina’s coordinated care approach for pregnant women.

The North Carolina program connected Hannah White with a legal aid lawyer who was able to secure a restraining order against her husband and help her file for divorce. It enrolled her in a class for first-time parents. And it gave her intensive medical care to assure that her bleeding was controlled, particularly during delivery when doctors gave her a transfusion of platelets.

She delivered a healthy daughter, Nala, in 2015. This fall, with a new boyfriend, she had a second baby girl, Maddilyn. “I was very happy with the care I got here,” she said last month at the end of an hour-long postpartum visit to MAHEC, during which she was screened for postpartum depression and received advice on birth control options, a particularly complicated issue for White because of the need to avoid any methods that would increase bleeding.

White held a sleeping and swaddled Maddilyn in her lap while Nala, in pink sneakers and polka-dot pants, impatiently pulled on her grandmother Breta’s hand. With them was Denise Duckett, White’s care manager, who has spent far more time with her in the course of her two pregnancies than anyone else in the care team.

“She’s been my sounding board,” White said of Duckett. 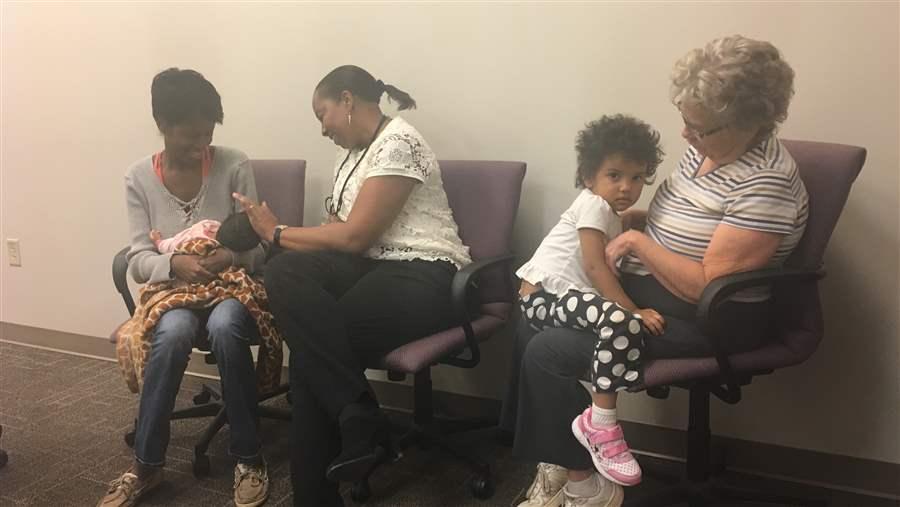 From left to right, Hannah White with her newborn Maddilyn, Denise Duckett, her case manager, Nala, her 2-year-old daughter, and mother, Breta White, soon after her postpartum visit to the Mountain Area Education Health Center in Asheville, North Carolina.

Today, there are 380 pregnancy medical homes in 94 of North Carolina’s 100 counties. According to Community Care of North Carolina, the nonprofit group hired by the state to oversee the program, 94 percent of obstetrical practices that serve the Medicaid population participate in the program. Nearly 55 percent of all deliveries in North Carolina are by women who are Medicaid beneficiaries. Although the mission of the program is to reduce the number of preterm births, the benefits don’t end there.

“Improving birth outcomes for infants, improves health outcomes for moms too,” said Dr. Kate Menard, a maternal fetal specialist at the University of North Carolina Chapel Hill and one of the designers of the North Carolina pregnancy medical home model. For example, limiting smoking, depression and domestic violence and controlling diabetes have been shown to lessen the chances of preterm births while also contributing to the health of the mother.

In becoming part of the network, obstetrical clinics commit to certain practices established by Community Care of North Carolina, such as completing a questionnaire with new patients to identify whether their pregnancies are high-risk.

Using case managers, providers in the North Carolina network strive to help patients understand medical terminology and push them to keep appointments and take their medications. They also find shelter for homeless expectant mothers, guide women to food pantries for fruits and vegetables, and direct people with addictions to treatment centers or mental health services.

“What happens in an ob-gyn’s office is a minimal part of the care patients need,” said Dr. Beth Buys, a MAHEC ob-gyn. Buys said doctors usually don’t have the time to delve into non-clinical issues and are ill-equipped to handle them. “It used to be we were almost afraid to ask the patient because we didn’t know anything about the resources to address them.”

Community Care of North Carolina offers incentives to obstetrical practices to encourage participation. Offices receive higher reimbursements than the normal Medicaid rate for vaginal births, $50 for every risk assessment form they complete and $150 for every participating woman who comes to a postpartum appointment. Kate Berrien, director of maternal health for Community Care of North Carolina and a founder of the program, said that the incentives don’t cost Medicaid additional funds because of savings realized in the program by, for example, achieving lower rates of Caesarian births.

In the western region, that champion is Dr. Arthur Ollendorff. He admits that he often runs into resistance from ob-gyns who have become set in their ways.

“A lot of our work is cajoling people,” he said.

North Carolina’s Medicaid agency plans to move by mid-2019 from a fee-for-service plan, in which Medicaid pays for each treatment or office visit, to a managed care system, in which providers are paid in a lump sum for each patient no matter what their care requires.

The change will require new ways for paying for the pregnancy medical homes, but Pettiford of North Carolina’s health and human services department said the state is committed to continuing the program. “We are seeing good outcomes,” she said. “No one wants to see that progress interrupted.”