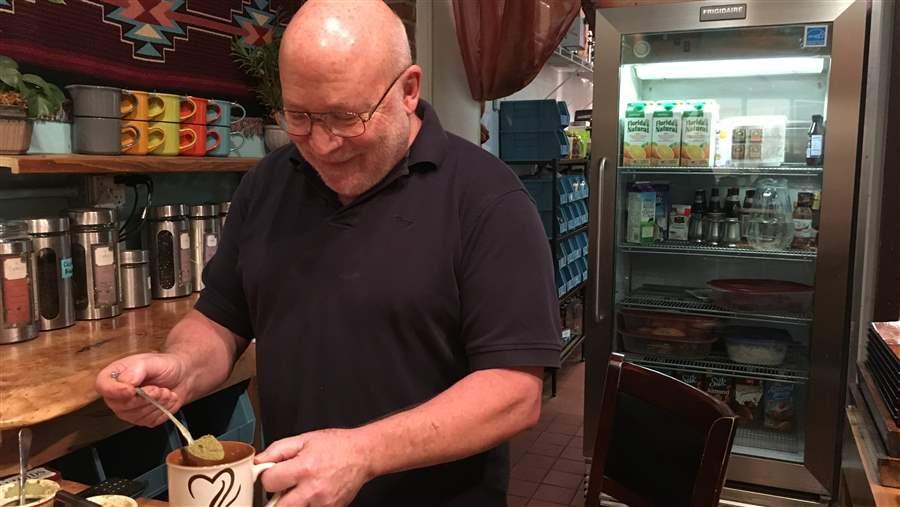 Robert Roskind is the owner of the Oasis cafe in Carrboro, North Carolina, where a typical serving of kratom is a heaping teaspoon of powder in a mug of hot water, orange juice or chocolate almond milk. As consumption of the opioid-like botanic grows, some cities and states are banning its use.

CARRBORO, N.C. — On a sunny November afternoon in this quiet college community, a steady stream of customers walks through the doors of a local cafe called Oasis for a cup of an increasingly popular herbal beverage. The menu offers coffee, black tea, beer, wine and pastries, but nearly everyone opts for a $5 mug of kratom (pronounced KRAY-dum).

A powder ground from the leaves of an indigenous Southeast Asian tree related to the coffee plant, kratom (Mitragyna speciosa) offers pain relief and mood enhancement, similar to prescription painkillers.

Advocates say the substance, which does not depress the respiratory system and therefore presents little to no overdose risk, could help reduce the nation’s reliance on highly addictive and often deadly prescription painkillers. Some addiction experts also argue the plant could be used as an alternative to methadone, buprenorphine and Vivitrol in medication-assisted therapy for opioid addiction.

Used for centuries to fight fatigue, pain and anxiety in Indonesia, Malaysia, Myanmar, Papua New Guinea and Thailand, kratom was rarely taken in the United States until recently.

Now, with growing concerns about the dangers of prescription painkillers, an estimated 3 million to 5 million people are using kratom and reporting positive results, based on information from retailers. But worries that the unregulated plant product could be abused for its mild euphoric qualities and users could become addicted are spurring federal officials to issue public health warnings — and a handful of states and cities to impose bans.

Animal studies have shown that kratom use may lead to addiction. But user surveys indicate that although the herb can be habit-forming, withdrawal symptoms are no worse than those encountered when quitting coffee, sugar or certain herbal supplements. Withdrawal symptoms, which typically last three to four days, include muscle aches, cravings, a runny nose, restlessness and mood swings.

The Drug Enforcement Administration last year said it intended to classify the herbal supplement as an illegal Schedule 1 drug, along with heroin, LSD and marijuana. But after public demonstrations, letters from Congress and a petition with more than 142,000 signatures, the agency put the proposal on hold. 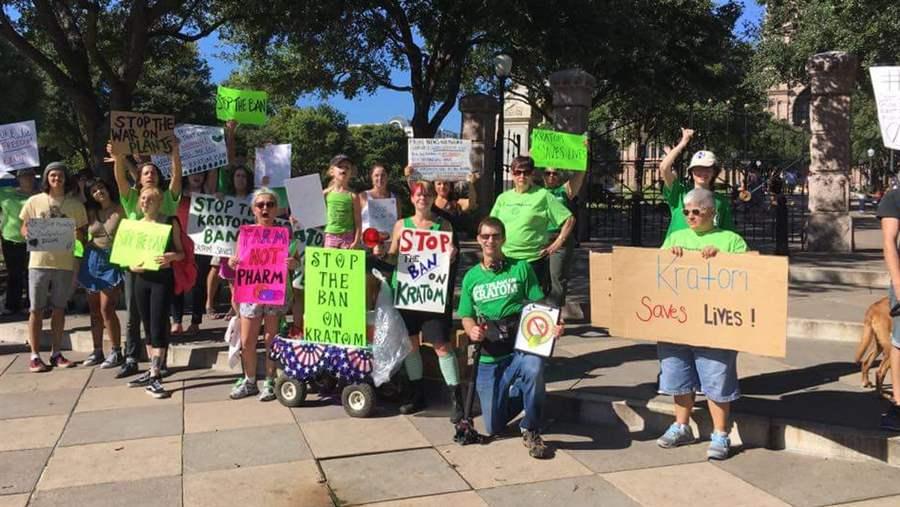 Advocates in September 2016 held a march in Washington, D.C, to protest a proposal to classify kratom as having a high potential for abuse. The Drug Enforcement Administration later withdrew its proposal.

Courtesy of the American Kratom Association

Last month, Food and Drug Administration chief Scott Gottlieb issued a public health warning, citing 36 deaths in which kratom was present, but not necessarily the cause. About 50,000 Americans die of drug overdoses each year. In addition, the FDA, which has been seizing imports of kratom at U.S. ports since 2013, stepped up import enforcement.

The agency also cited a 10-fold increase in kratom-related calls to poison centers between 2010 and 2015 — from 26 calls to 263, out of roughly 2.2 million calls a year. And Gottlieb warned about the unknown risks of using kratom to treat opioid addiction, saying he fears some kratom may have been laced with opioids, and that the FDA needs to conduct more study on the plant’s potential benefits.

In response, the American Kratom Association, a Colorado-based advocacy and lobbying organization, issued its own analysis of FDA data on adverse drug events, calling the kratom numbers “incredibly insignificant in the broader context” of drug-related deaths and adverse reactions.

At Oasis, no one seems concerned about the hubbub in Washington. Owner Robert Roskind says the controversy has only improved business by focusing attention on what he says is still a little-known plant with huge benefits and few drawbacks. “Except for the rare upset stomach or lightheadedness, it has helped nearly everyone,” he said. “And it’s cheap. I have about 300 customers and most come here several times a week. Some buy take-home packages.”

With subdued lighting, soft music and mystical artwork, Oasis has a peaceful vibe. Customers are happy to talk about their reasons for taking kratom, and they vary widely.

A group of University of North Carolina students from nearby Chapel Hill sit on floor pillows in a corner, reading and working on laptops. Kratom sharpens their focus when they need to study for an exam, one student said. “It’s like coffee without the jitters.”

A 27-year-old tattooed chef from Brooklyn said he started drinking kratom to relieve withdrawal symptoms after he decided to quit heroin on his own three months ago. A conservatively dressed 22-year-old fraternity brother said kratom has helped him stop binge drinking.

A woman in her 40s, recovering from brain cancer therapy, says it relieves her anxiety and improves her sense of well-being. Two women who work with preschoolers say it lowers their stress level. And a 29-year-old construction worker says it keeps his fibromyalgia symptoms, including pain and fatigue, at bay so he can get up and work every day.

Even among the diverse crowd here at Oasis, Bob Whyte, a well-dressed 80-year-old businessman from Chapel Hill stands out. A self-described straight-laced “boy scout,” he said he’s been drinking kratom three times a day to relieve severe back pain from failed surgery.

“I’d been taking tramadol and hydrocodone consistently for two years when I found out about kratom,” he said. Whyte said his doctors didn’t want him to keep taking the highly addictive prescription painkillers, and they had no objections when he told them he was switching to kratom.

At first, Whyte said he was a little fearful about trying the plant-based medicine. Roskind gave him a kratom brownie and suggested he eat half of it at home.

“I picked a day when I wouldn’t be driving and sat on the front porch and had half a brownie. I waited a half-hour and felt fine, so I had the other half. That’s when I had a little happy moment there on the porch,” he said sheepishly.

Since that July morning, Whyte said he’s figured out what dose is best for him — enough to bring his pain down to a tolerable level without feeling drowsy. Now he says he’s telling everyone he knows about kratom. 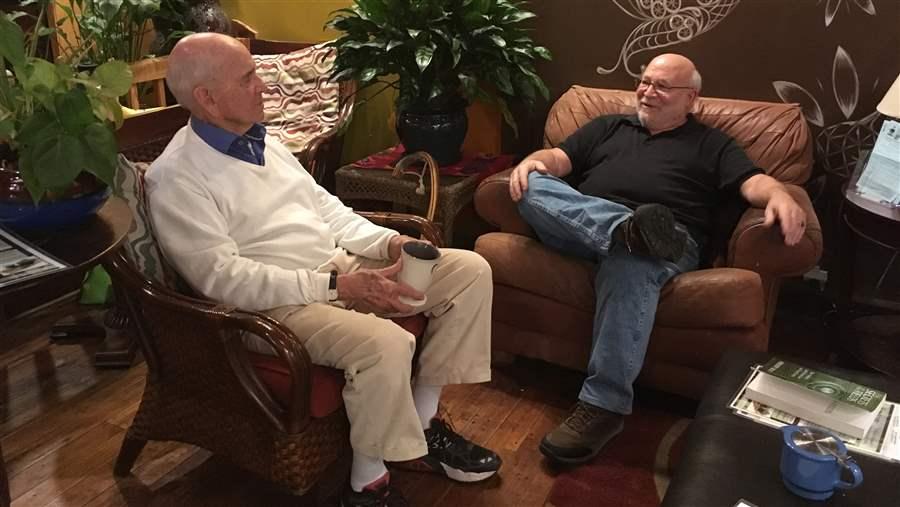 Bob Whyte (left) chats with Robert Roskind, owner of Oasis cafe in Carrboro, North Carolina, over a cup of kratom.

Despite rave reviews from kratom users, most physicians and researchers argue that research using human clinical trials is needed to accurately determine the leaf powder’s potential harms and benefits. They also insist that oversight of commercial sales of the plant is needed to ensure consumers are getting high-quality, uncontaminated products.

But scientists and other stakeholders differ about whether sales of the plant should be curtailed in the meantime.

The American Society of Addiction Medicine argued in comments to the DEA last year that the whole botanical product, like the powder sold at Oasis, should be made illegal to prevent people with addictions from trying to use it to recover. Since three FDA-approved medications exist that have proven safe and effective, using kratom to treat opioid addiction presents an unnecessary risk for people with addictions, the group said.

At the same time, they recommended that what appears to be the plant’s primary active ingredients, mitragynine and 7-hydroxymitragynine, should remain legal so they can be researched for their pain relief and addiction treatment potential.

Oliver Grundmann, an associate professor of medicinal chemistry at the University of Florida College of Pharmacy, has surveyed kratom users and found that very few report becoming addicted and most use it to treat chronic pain, mental health conditions and drug addiction.

“I’m questioning whether we are doing any good by banning kratom,” Grundmann said. If states and the federal government make kratom illegal, he said, it would not only slow the progress of research, but it would also leave many kratom users no choice but to switch back to painkillers or heroin.