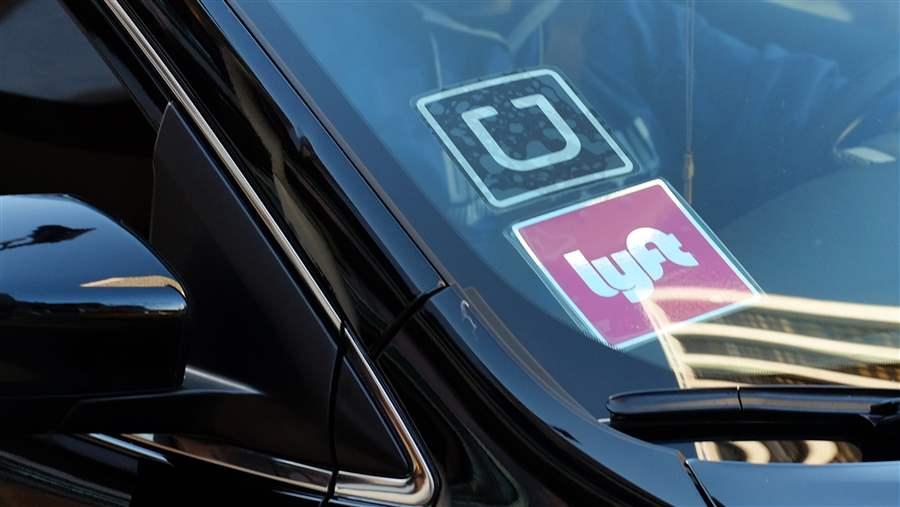 A driver displaying Lyft and Uber stickers on his front windshield drops off a customer in downtown Los Angeles. Some state child support officials say they have struggled to get the ride-hailing companies to comply with reporting requirements for new hires.

Editor's note: This story was corrected 12/1 to say that Laura Morgan is an attorney based in Massachusetts.

The rise of the gig economy and a broad shift to contract work is making it easier for people to evade paying child support, causing headaches for parents and for state officials charged with tracking down the money.

About 70 percent of child support payments are collected by withholding income from paychecks. It’s possible to capture the wages of an Uber driver, Airbnb renter or a contractor — but only if state officials know that a person owing child support is earning wages that can be garnished, and only if the employer cooperates.

In every state, employers are required to report new hires to a child support database used to find out where parents are working to set orders and withhold income. But in most states, employers are bound by those rules only when they hire full-time or part-time employees, not contractors or gig workers, who are sometimes classified as contractors. Texas expanded its law to include contractors in 2015, and lawmakers in other states, including Oregon and New York, have proposed doing the same.

But even in the states where employers are required to report contractors, such as California, companies such as Uber and Lyft still aren’t following the rules, and state officials have few ways to make them comply, said Alisha Griffin, who heads the California Department of Child Support Services.

Nationwide, there is about $114 billion in unpaid child support, which has accumulated over time and grows every year. Child support orders are set when parents separate to ensure that both parents pay for children’s basic needs, such as food and clothing.

Working as a contractor to hide income and avoid paying child support is an old problem hiding “in new clothes” in the gig economy, said Laura Morgan, a family law consultant and attorney based in Massachusetts and the author of a book called Child Support Guidelines.

Another challenge is that gig jobs often don’t last long: People offering services through an online platform participate less frequently after their first month, according to a 2016 study by the JPMorgan Chase Institute.

Arizona child support officials learned this lesson when they asked Uber to withhold the wages of people who owe child support. For the last year, the company has been complying, said Tasya Peterson, a spokeswoman for the state’s Department of Economic Security. But often, Peterson said, “by the time the department finds out these individuals are employed, they no longer work for the company.”

As the gig economy continues to grow, there will be more interest in tracking down this type of income, said Rob Wells, president of YoungWilliams, a firm based in Mississippi that provides child support services for states across the country.

More than 2.5 million adults in the United States, or about 1 percent of the adult population, participate in the on-demand platform economy every month, and some projections show that will double by 2020, according to a 2016 study by Caroline Bruckner, managing director of the Kogod Tax Policy Center at American University in Washington, D.C.

More generally, the percentage of U.S. workers who are contractors or freelancers rose from 10.1 percent in February 2005 to 15.8 percent in late 2015, according to a 2016 study by Harvard and Princeton researchers.

There are many reasons why people would try to hide this income — not just to lower their child support payments, but also to avoid paying taxes, increase welfare payments, and to get unemployment and other social benefits.

To find unreported income, state child support officials and attorneys hired by parents look at tax returns, cash flow in bank accounts, and parents’ lifestyle and purchases, Morgan said. “If you claim to have $18,000 in income, but you just bought a Maserati, how is that possible?”

The best way to find out about cash not reported is through custodial parents or social media, Wells said. “We will pull up something from social media and find someone bragging about their fancy cars or jewelry, or trips or something like that.”

In New York, state Sen. Marisol Alcantara said she constantly hears from single mothers who are having trouble collecting support for their children. Alcantara, a Democrat, sponsored a bill this year that would have required companies to report contractors to the state’s new hire database. The bill did not pass this year but Alcantara plans to continue to support it during the next session.

“It’s very hard to enforce child support if the agency doesn’t know about it,” she said.

About a dozen states require companies to report contractor hires to state databases, with some of the laws applying only when contractors make more than a certain amount, according to information from the federal Office of Child Support Enforcement in the Department of Health and Human Services.

But there aren’t many sanctions states can levy to enforce the rules, according to Kate Richardson, who directs Oregon’s child support program and is a chairwoman for a policy committee at the National Child Support Enforcement Association, a nonprofit membership and advocacy group for child support professionals. It’s hard to get companies to comply when there isn’t a heavy hammer to drop, she said, and since employers are an important partner in child support collection, “no one really wants to drop heavy hammers.”

Uber and Lyft — two of the country’s best-known gig economy employers — did not respond to questions about whether they currently report new hires to states or whether they adhere to child support orders.

Child support officials and advocates have long thought that federal government should add teeth to new hire reporting requirements to get companies to comply, Griffin said.

The federal Office of Child Support Enforcement declined to comment on its rules, referring to state offices questions about whether companies like Uber and Lyft were required to report new hires and comply with withholding orders.

In California, Griffin said she has been trying to come up with a solution since she started taking Uber rides. She also has discussed the issue with several of her counterparts in other states, who face the same problems. She plans to look further into the rules for companies that operate across state lines to see what can be done to get more cooperation or enforcement.

State officials have other ideas, too, like checking federal 1099 tax forms that self-employed workers must file. But many say the best way to make sure children get support is still to work with parents to set reasonable orders.

“We aren’t about squeezing one parent to pay the other,” Richardson said.