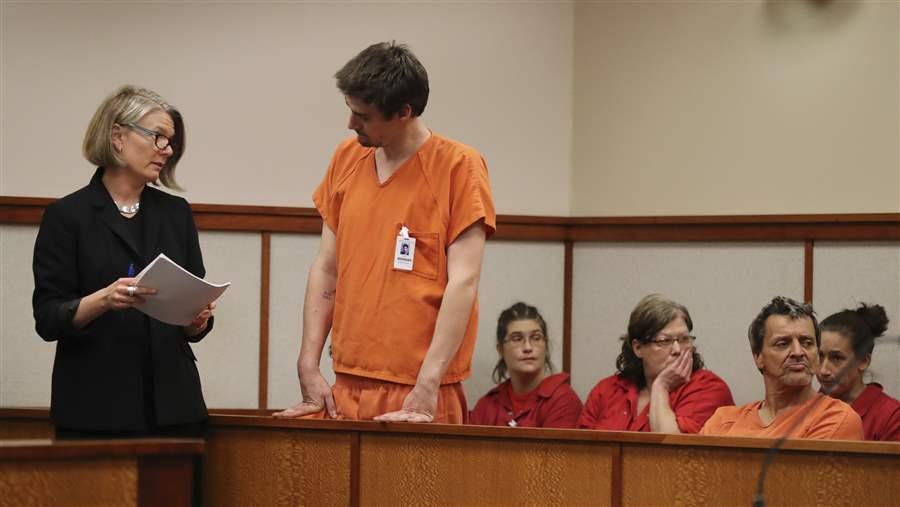 A court-appointed “lawyer of the day” explains a legal implication to a person charged with a crime in Portland, Maine. Increasingly, public defense advocates are suing states for more funding for legal representation for poor defendants.

Public defenders have complained for decades they’ve got too many cases and not enough money — or time — to do their clients justice.

Now, more public defense advocates are suing states for more funding. Overwhelmed public defenders also are increasingly trying other tactics: refusing to take on new cases, raising money through crowdfunding, even trying to assign a case to a sitting governor.

As poor defendants languish in jails awaiting representation that’s months or years away, even some conservatives wonder whether it’s time to change the system.

“If the government can bring charges against you and you’re unable to have someone represent and defend you, that’s the route to totalitarianism. You’re stripped of your rights,” said Pat Nolan, director of the Center for Criminal Justice Reform at the American Conservative Union Foundation, the advocacy group that hosts the annual Conservative Political Action Conference.

The Sixth Amendment guarantees anyone facing criminal charges the right to a speedy and public trial by an impartial jury and legal counsel. And with its 1963 decision in Gideon v. Wainwright, the U.S. Supreme Court ruled anyone charged with a serious crime had a “fundamental” right to counsel, no matter their ability to pay — but left the matter of funding up to the states.

Today, public defense is typically paid for with a patchwork of state and county funding, with the exception of federal public defenders. The U.S. Department of Justice also provides limited grants for state public defense, many of which go to training.

And across the country, public defenders have been pushing back. Last week, public defenders across Massachusetts demonstrated against low pay (average base salary is $47,500 a year) and their lack of collective bargaining power as state employees.

In October, public defenders in Kansas City, Missouri, staged a courtroom protest to decry their staggering caseloads — most handle 80 to 100 cases a week. And in the wake of proposed budget cuts, Amy Campanelli, the Cook County, Illinois, public defender, threatened to stop taking on new cases.

There has been action in the courts, as well. Earlier this month, the American Civil Liberties Union filed a class-action lawsuit against the state of Nevada for allegedly neglecting the constitutional rights of poor defendants in rural counties. In those counties, private contractors who aren’t required to have experience or training in criminal defense are hired by the county to defend the poor, the suit alleges.

In recent months, the ACLU also has sued both the state of Missouri and Grays Harbor County in Washington state over systemic problems with their public defender programs. And a case is pending in the Idaho Supreme Court over deficiencies in the state’s indigent defense system.

Sometimes, the public defenders themselves are the ones getting sued. In February, the Southern Poverty Law Center sued Louisiana Gov. John Bel Edwards, a Democrat, along with the state Public Defender Board and the state’s chief public defender over what the organization calls the state’s “broken” system of indigent defense.

And in September, the Missouri Supreme Court disciplined two public defenders, one for taking on too many cases and the other for not asking permission before refusing to take on any more cases.

“It’s coming at us from both sides,” said Michael Barrett, director of the Missouri State Public Defender System. “The courts are frustrating our efforts to limit our caseloads and at the same time, they’re censuring us.”

Public defenders are so underfunded and understaffed, Barrett said, that often they’re forced to tell clients, “‘We’re going to work hard on your case, but it’s going to be a while before I can get to you.’ That tells defendants they have a choice to make. If they want their constitutional defense, they have to sit in jail for a few months.”

Or, he said, as happens more often than not, defendants can take a plea even if they’re not guilty, just so they can get out of jail and get on with their lives, often not fully understanding the consequences. “Then they can’t get jobs or housing,” Barrett said.

So what’s the solution?

Many legal experts on both sides of the aisle agree that what’s needed is a complete overhaul of the system. Some, such as Marc Levin, the vice president of criminal justice at the Texas Public Policy Foundation, a conservative think tank, suggest reducing the number of offenses that carry the potential of jail time.

That way, fewer cases would require the right to counsel provided by the government — and limited indigent defense resources could be spread over a smaller number of cases, Levin said.

Other options: Enact legislation allowing the federal government to bring actions against states and localities that fail to provide poor defendants with adequate representation, said Norman Reimer, executive director of the National Association of Criminal Defense Lawyers, a professional organization based in Washington, D.C.

Or, rather than charging nonviolent offenders with a crime, assign them to a social worker and funnel them into counseling and drug treatment programs. Or increase the use of restorative justice projects, which use mediation between victims and defendants to come up with an agreed-upon solution and restitution, Levin said.

Ultimately, Levin said, he hopes that the shortcomings in the current system will inspire lawmakers to come up with a solution that requires a smaller government footprint — and that protects public safety and the constitutional rights of defendants.

For now, advocates continue to sue to force change.

In court, the battle over indigent representation usually takes one of two tactics, said Stephen Hanlon, general counsel for the National Association for Public Defense: Either public defenders or civil rights advocates sue states over funding, or they end up in court for refusing to take on any more cases.

Sometimes it works: New York’s county-funded public defender system was found to be “severely dysfunctional” in a statewide study in 2006, and a civil liberties group later sued, arguing the system violated the constitutional rights of poor defendants.

The state settled, and this year’s budget, signed into law by Democratic Gov. Andrew Cuomo, establishes standards for public defender services and requires the state to refund counties for the costs of meeting those standards.

Next year, New York will begin funding a statewide public defense system, to be fully phased in by 2023 at a projected annual cost of $250 million.

Meanwhile, some public defenders are working to raise awareness of the problems they face, though the results have been mixed.

In 2016, Missouri’s Barrett drew attention to his office’s massive workload when he leaned on a provision in state law that allows him to appoint any member of the state bar to a case, assigning then-governor Jay Nixon. (A judge later ruled that Barrett didn’t have the authority to appoint Nixon.)

And last year, Derwyn Bunton, who runs the public defenders’ office in New Orleans, said his office would no longer accept the most serious felonies; he said he didn’t have the staff to handle the workload. (Cases are then put on a waitlist and a judge decides which pro bono attorney to assign them to, which means that defendants can wait weeks before meeting with an attorney.)

Until recently, the city had the highest incarceration rate in the country. And the vast majority of its defendants — 85 percent — rely on public defenders.

New Orleans’ public defenders’ office is funded by a combination of city and state money along with income from court and traffic fees and fines, which means it can’t rely on a set amount each month and, as a result, almost always operates at a deficit.

The year before, when his office was faced with a $1 million shortfall, Bunton took the unusual step of setting up a crowdfunding page. The campaign raised nearly $100,000, enough to help the office avoid furloughs.

“I try to avoid drama,” Bunton said. “There’s not a lot of extreme things that we do. But we try to stand on principle,” which is why his office continues to refuse cases officials feel they can’t handle.

“Rich justice and poor justice,” he said, “should look the same.”