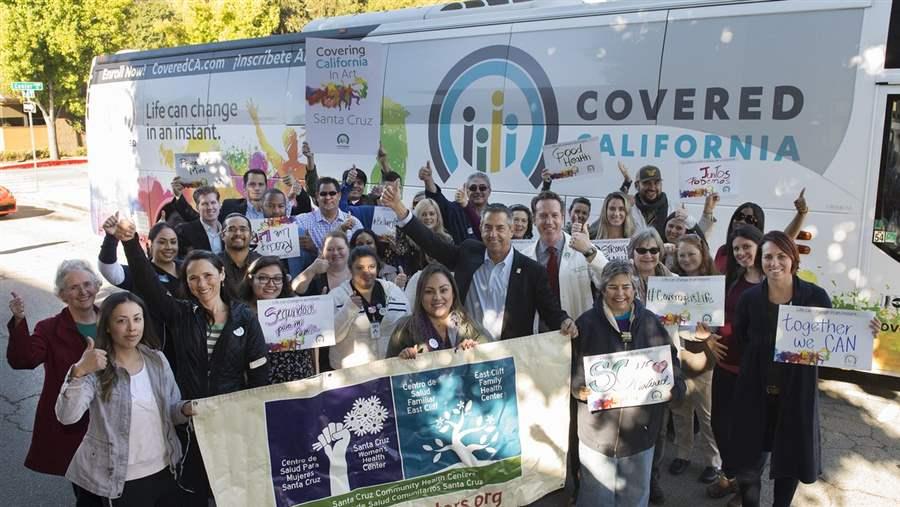 Covered California visits the Santa Cruz Community Health Centers on its 22-stop statewide bus tour to urge people to sign up for health insurance through the Affordable Care Act. Cutbacks in federal funds have made it difficult for some states to get the word out.

Editor's Note: This story has been updated to clarify the number of sign-ups in California on the first day of enrollment.

In Florida, the state’s main nonprofit health organization is sending out flyers, running radio spots, and even calling people individually to remind them to sign up for health insurance. In Texas, volunteers are fanning out across the state. And in Utah, with the highest per capita number of children enrolled in “Obamacare” in the nation, officials are squeezing every penny of their diminished budget as they work to advertise the online marketplaces where people can purchase federally subsidized insurance policies.

Somehow it’s working, at least for now. Initial reports from the agency supervising the program show Obamacare sign-ups for the federal marketplace are well ahead of the expected pace, at more than 600,000 in its first four days, leaving experts to wonder whether the volume is about successful advertising, a backlash from all the talk about scrapping Obamacare, officially known as the Affordable Care Act (ACA), or just an initial rush among the well-informed.

“I don’t have numbers yet, but anecdotally, even in our rural areas we are hearing they are busier than they have ever been,” said Jodi Ray, program director of Florida Covering Kids & Families, a nonprofit based at the Chiles Center at the University of South Florida.

The nonprofit’s budget, nearly $5 million last year, was cut by $900,000 this year, Ray said. With fewer staff and less money for advertising, Ray has pushed resources into the six-week sign-up period, and the rest of her budget this year will take a hit. She says there’s lots of misinformation out there, but that the sign-ups reflect that “people actually need (health insurance). The need is there, and the demand is there.”

But some advocates worry about the coming weeks. Marketing got a lot harder this fall among the 39 states that use HealthCare.gov, and for a very specific reason: President Donald Trump, in his effort to undermine his predecessor’s signature legislative achievement, slashed the advertising budget by 90 percent and the open enrollment period from 12 weeks to six.

As a result, many states have been patching together public relations as they’re able: stretching the limited federal funds, relying on volunteers, or filling gaps from their state treasuries. And they’re fighting not only a lack of resources, but also persistent rumors, driven by the unsuccessful “repeal and replace” effort in Congress, that the Affordable Care Act is dead or dying.

Randal Serr, director of Take Care Utah, a network of public and private enrollment “navigators,” said there are fewer navigators to assist with sign-ups because 61 percent of its funding was cut, bringing the total down to $290,000 from $740,000.

“Based on what we’re seeing, there’s a really high demand,” Serr said. “But there’s a lot of confusion generally on costs, whether ‘repeal and replace’ happened, or what the executive order means. Those things are really throwing people off.”

Despite the misinformation, the facts are that the open enrollment period is Nov. 1 to Dec. 15 of this year in most states. In states that run their own marketplaces, and therefore don’t get federal money for outreach, enrollment periods generally have been extended.

“Our tracking polls show a vast amount of confusion. People don’t know when (open enrollment) begins or when it ends. We see about 30 percent of the public thinks ACA was repealed, or they are not sure,” said Karen Pollitz, senior fellow at the Kaiser Family Foundation, which studies health care. “We see people in the majority of states who believe they won’t be able to afford it at all.”

Getting the Word Out

The demand nationwide also appears high. The Centers for Medicare & Medicaid Services, which administers the federal program, announced that 601,000 signed up on healthcare.gov during the first four days of open enrollment that began Nov. 1.

In Texas, where 16.6 percent of the population remains uninsured, the highest percentage in the nation in 2016, according to the U.S. Census Bureau, community groups are trying to take up the slack left by marketing cutbacks. Cover Texas Now, a coalition of consumer and faith-based organizations, is looking for volunteers to help with sign-ups.

“We’re just dedicating more staff and time toward the efforts because we have half the time to get it done,” she said, noting that her agency’s enrollments are also double what they were at the same time last year. But she is leery of translating that number to an eventual total.

“We hope it continues,” she said. “We need double the number of people coming in in half the time as last year.”

Her agency’s budget of $600,000 for outreach is the same as last year, she said, and her workers are using some of that money to get the word out in schools, libraries, beauty shops, and on English and Spanish radio stations.

Steve Wagner, executive director of Universal Health Care Action Network of Ohio, a progressive consumer health care group, said the lack of federal funding and publicity for his and other states is absurd, considering that private health insurance plans, such as those sponsored by employers, publicize their enrollment periods all the time.

“If you qualify for a subsidy, you really need to shop and look,” Wagner said. “In Ohio there are counties where you can get a bronze plan for nothing.”

The federal Centers for Medicare & Medicaid Services would not disclose state-by-state registration numbers during the first days of open enrollment, but some states say sign-ups are going well.

The Trump administration’s advertising cutbacks have no impact on states that run their own exchanges, because they’ve always had to come up with money to market their health insurance marketplaces.

In Rhode Island, 640 people signed up in the first week, up from 126 in the same time frame a year ago, according to The Providence Journal, after the state’s health insurance exchange, HealthSource RI, began advertising in September.

In Maryland, twice as many people signed up on the first day, compared with last year. And a live website for sign-ups had to stay online for an extra hour one day at the start of sign-ups because so many people were in the virtual waiting room.

There were about 5,900 sign-ups in California on the first day, 25 percent more than last year, according to James Scullary, a spokesman for Covered California.

“We know that marketing means more people sign up, they are healthier, and it reduces premiums for everybody, particularly people who don’t get subsidies,” Lee said. “The federal decision to cut back marketing in the states they are supporting, is bad math. You are going to have fewer Americans get coverage in those states, because of the cutback in marketing. And premiums will rise for everyone else, because the people who sign up are heathier.”