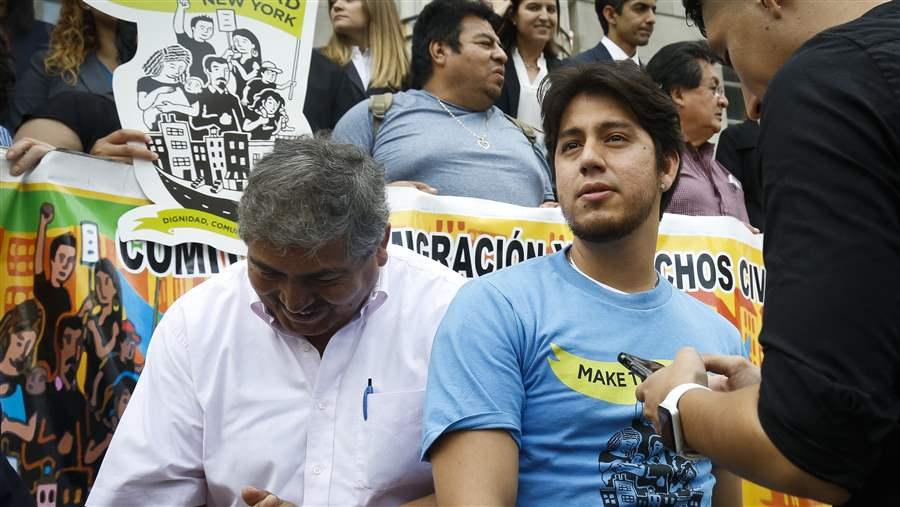 Martin Batalla Vidal, front right, arrives for a rally of legal and civil rights groups in New York before going to court to challenge President Donald Trump's plan to phase out a program shielding young immigrants from deportation. Many immigrants appear in immigration court without an attorney, but a number of cities and states are creating legal defense funds to help them.

Editor's Note: This story was updated Nov. 10, 2017, to provide the full name of Oren Root of the Vera Institute.

ARLINGTON, Va. — Here in Judge J. Traci Hong’s crammed courtroom, the jargon flows: There is talk of I-360s and I-589s, of provisional waivers and LPRs — lawful permanent residents. Those who’ve come to plead their case shift in their seats, knees jittering. Some are with attorneys; others do without.

One of those doing without is Sandra Milian, a single mother of two. She’s been in this country since 1999, and for the past five years, the 34-year-old cook has been staring down deportation. She wants to stay in the United States, and she’s applying for asylum because she fears life back home in Guatemala is too dangerous.

As the court interpreter translates for Milian, the judge slowly lists every piece of paperwork needed: immigration forms, police reports, doctor’s orders, witness testimony. “This is your last chance,” Hong tells her repeatedly. “Do you understand?”

Milian will have more than two years to pull things together, but if everything isn’t filled out perfectly by her next court date, in May 2020, the judge said, “I will have no choice but to deny your application. And I don’t want to do it. You need to find an attorney to help you.”

Because immigration proceedings are civil rather than criminal, participants don’t have a right to a lawyer. But having one is a huge advantage for immigrants seeking to stay here, so as President Donald Trump’s administration tightens enforcement of immigration laws, some cities and states are providing free legal assistance to immigrants facing deportation.

Many immigrants in immigration court are seeking asylum, fearing that if they are returned home, their lives will be imperiled. Others have had contact with the criminal justice system, which means they are now deportable. Some may be “detained,” or held in detention facilities, while others are out on bond.

The bottom line: it is in immigration court where it is determined whether a noncitizen will get to stay in the U.S., or be forced to leave.

Increasingly immigrants seeking asylum are trying to navigate the complexities of the immigration court system without representation, from 13 percent of asylum seekers in 2007 to 20 percent in 2016, according to the TRAC Immigration Project at Syracuse University.

And just 37 percent of immigrants facing deportation have legal representation, according to a 2015 study published in the University of Pennsylvania Law Review, which looked at 1.2 million deportation cases decided between 2007 and 2012.

“The immigrant is going up against a government lawyer, a person who knows the rules,” said Dan Kesselbrenner, executive director of the National Immigration Project of the National Lawyers Guild. “Even people with valid claims get intimidated by the process.”

In April, New York became the first state to guarantee legal representation to every noncitizen who has been detained by immigration officials, allocating $10 million in fiscal 2018 for an immigrant defense fund. And in June, California Gov. Jerry Brown, a Democrat, earmarked $15 million to provide assistance to noncitizens seeking legal immigration status.

Cities are taking action, too. In 2013, New York City moved to establish the country’s first public defender system for immigrant detainees. This year, the City Council agreed to allocate $10 million for legal aid to immigrants facing deportation in 2018, up from $2.7 million last year.

Over the past year, Austin, Baltimore, Chicago, Los Angeles, San Francisco, Seattle and Washington, D.C., are among the cities that have started offering free legal aid to immigrants in danger of being deported.

But the cities’ efforts aren’t helping immigrants in rural areas, where the dearth of immigration attorneys is especially stark. Immigrants held in federal detention facilities are the least likely — about 14 percent — to have legal representation because they’re more likely to be held in remote locations that are difficult to get to.

“The fact is, there is still a huge percentage of people who are facing deportation who are not being represented,” said Oren Root, director for the Center on Immigration Justice at the Vera Institute of Justice, which worked on the pilot project.

In the past, the American Bar Association has called for government-appointed attorneys to represent unaccompanied minors as well as people with mental health issues or mental disabilities in immigration court.

But in August, the group pointed to “an expected increase in detention and removal proceedings due to the current Administration’s expanded enforcement priorities” and urged the federal government to create a national public defender system in immigration courts.

Immigration advocates say such legal support would significantly improve the chances that noncitizens can remain in the country legally, keep their families together, and work and pay taxes.

But advocates for limiting immigration, such as Jessica Vaughan of the Center for Immigration Studies, say that immigration defense funds are an inappropriate use of taxpayer money.

“It’s hard for me to see what the public interest is in prolonging the deportation process,” Vaughan said. “They don’t have to go to immigration court. They can go home.”

Training the Next Generation

The New York Immigrant Family Unity Project launched in 2013 as a pilot project with a $500,000 grant from the New York City Council. Four attorneys in one New York City courtroom provided free legal services to close to 200 indigent detainees. All were facing deportation and were being held at county jails. The program was expanded the following year and by 2016, it had represented 1,772 people in deportation proceedings.

And cities such as Boston, Chicago, San Francisco and Los Angeles have used it as a model to create similar projects.

When noncitizens have representation, their cases sometimes can be resolved more quickly, said Sarah Deri Oshiro of the Bronx Defenders, one of the original lawyers on the New York project. And the lawyers made sure to not give false hope to people who weren’t eligible to remain in the United States, she said.

“People were told straight away, ‘Accept deportation,’ ” she said. “We saw this as humanitarian.”

Today, in the wake of Trump’s crackdown on immigration, there’s a push among immigration advocates in the private sector to train the next generation of immigration attorneys. For example, the Immigration Justice Campaign this year has signed up 1,000 pro bono attorneys around the country with no immigration experience, said Katie Shepherd, a lawyer at the American Immigration Council, which advocates for the legal rights of immigrants.

The lawyers will provide mentorship, training and technical assistance to fight and win immigration cases, she said.

“We’re hoping to connect detainees with winning cases with pro bono attorneys who can get them across the finish line,” Shepherd said.

Michael Mpras sits in the courthouse lobby with his clients, looking worn out. These days, he says, he and his law associate, who is his nephew, are scrambling to handle about 1,000 active cases. He’s busier than ever, he says, and he worries that things will just get worse.

As of September, there were 629,051 pending cases in immigration court — an all-time high, according to the TRAC Immigration Project at Syracuse University. The average case had been pending for 691 days.

Outside Hong’s courtroom, Milian talks about her struggles finding an immigration lawyer. One, she said, wanted $2,000 just to set up an initial appointment.

But now, she says, she has no choice if she wants to stay in the U.S. She knows the judge is right. Somehow, she says, she’ll find an attorney. She’s scared, but she’s got hope, too.