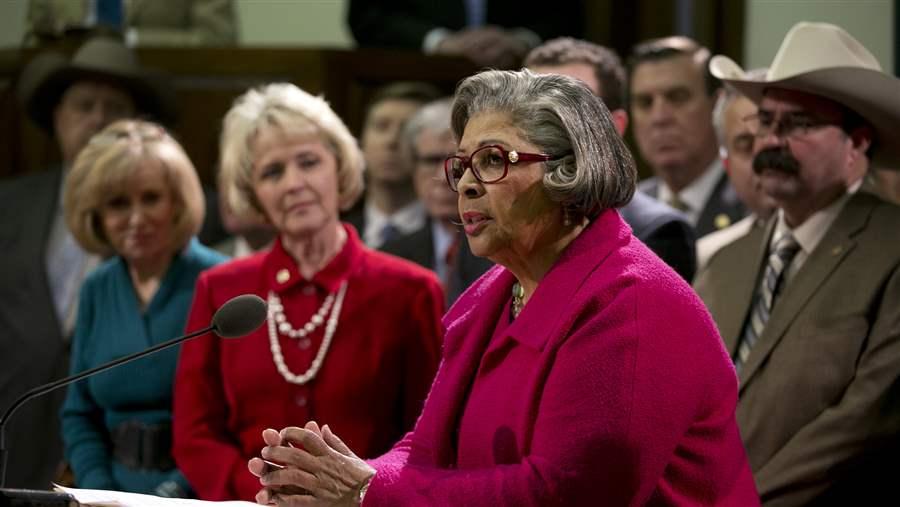 Texas state Rep. Senfronia Thompson, a Democrat, says female lawmakers in Texas don’t face nearly as much sexual discrimination as when she first took office, in 1973.

Colleagues warned Senfronia Thompson that speaking out would jeopardize her political future.

It was the spring of 1973, and 34-year-old Thompson had just started her first term in the Texas House of Representatives. Earlier that day, she was walking into a popular lunch place near the Capitol in Austin when Democratic state Rep. C.C. “Kit” Cooke saw her and said loudly, for everyone to hear, “Oh, here comes my beautiful black mistress.”

She was infuriated. That same afternoon, Thompson, a Democrat, stepped onto the House floor to tell her mostly white, male colleagues she would not tolerate racist or sexist insults.

“We will never root these maladies out of Texas,” she said, “unless we start with ourselves in this House of Representatives.

Even as sexual harassment allegations explode in statehouses around the country, Thompson, now 78, says that in Austin’s pink granite Capitol, she doesn’t see male lawmakers and lobbyists harass women like they did 44 years ago. Nevertheless, the nation’s longest-serving female legislator says that when it comes to winning and wielding political power, women remain at a distinct disadvantage.

Women hold a quarter of all the state legislative seats, but less than a fifth of the leadership positions, including Senate presidents, House speakers, and majority and minority leaders, according to the Center for American Women and Politics at Rutgers University. And they rarely make it all the way to the top: Women lead just five Senate chambers and six House chambers nationwide. Only five states have female governors.

“Women aren’t being tapped in the same way that men are,” said Jean Sinzdak, associate director of the Rutgers center.

The Year of the Woman

During Thompson’s first year in office, states were ratifying the Equal Rights Amendment, and Roe v. Wade affirmed a woman’s right to have an abortion. In Texas, Democrat Frances “Sissy” Farenthold had just run for governor, and Sarah Weddington, who represented “Jane Roe” in Roe v. Wade, was one of the women in Thompson’s freshman class of lawmakers.

But women had very little legal recourse against harassment. It wasn’t until 1980 that the Equal Employment Opportunity Commission officially defined sexual harassment and declared it a violation of a Civil Rights Act provision that prohibits employment discrimination.

During Thompson’s first term, she was one of just five women in the Texas House; there was one female senator. Only 22 women had been elected before her in either state chamber. She was one of just eight black representatives. “People just watched us like we were from outer space,” she said in a recent interview with Stateline.

Thompson was outnumbered, but she refused to be disrespected. “Being an African-American person, and having an Anglo call me a black mistress,” she recalled, “that’s just like being called a black whore.”

As the number of women in the Texas House and Senate has increased to 37, or 20.4 percent of all 181 lawmakers, Thompson said the atmosphere has become considerably more welcoming and respectful to women.

When canvassing for votes, though, women still report facing sexist comments, said A’shanti Gholar, political director of Emerge America, a political advocacy group headquartered in San Francisco that aims to get Democratic women elected. People ask female candidates why they aren’t home taking care of their children, she said, or even tell the candidates directly that they won’t vote for them because they are women.

“The first people they want to vote for are white men,” Gholar said, “Because white men, to people — that’s what power looks like.”

And though things may be better now than they were in 1973, discrimination and harassment remain rampant in statehouses across the country. In the past month, after many women accused Hollywood mogul Harvey Weinstein of sexual assault, women in many state capitols — including Arizona, California, Illinois, Kansas, South Dakota and Rhode Island — have come forward to accuse male lawmakers of harassment. Just this weekend, the Republican speaker of the Kentucky House of Representatives tearfully stepped down from his leadership role following harassment allegations.

While Thompson said she doesn’t often hear about men harassing women in Texas, state Rep. Donna Howard, 66, a Democrat, said she does. When asked if women were fully respected, she laughed. “In a word, ‘no.’ ”

“What I hear is mostly comments, but there is physical harassment, too, with people going too far with hugs and pats,” she said. “There is one report of a senator doing humping motions to a young woman in an elevator.”

Many comments from male Texas lawmakers have made the news over the years. In 1993, for example, Democratic Lieutenant Gov. Bob Bullock told a female senator that she could pass any legislation she wanted to if “she’ll cut her skirt off about six inches and put on some high-heel shoes.”

In 2011, when two female representatives got in a debate about a bill, male lawmakers screeched “meow.” That same year, then-state Rep. Mike “Tuffy” Hamilton, a Republican, asked a female colleague on the House floor a question about her breasts. “Young lady,” he said, “would you please tell us why your mountains are better than any of our mountains, and are they man-made or are they real mountains?”

That same year, a lobbying group created flyers protesting a bill Thompson introduced to change rules for certain insurance programs. The flyers showed a baby breast-feeding and said the legislation would “expand the nanny state.”

In an impassioned speech, Thompson again told her colleagues she wouldn’t tolerate disrespect. “And men,” she said, “if you don’t stand up for women today, don’t you walk in this chamber tomorrow.”

For a while, Texas women seemed to be gaining power. The state elected its second female governor, Ann Richards, in 1990. But she was the last. Howard said women have struggled to get leadership roles since. No Texas woman has ever served as Senate president or House speaker.

Richards, a Democrat, worked her way to the top, serving first as a county commissioner and the state’s treasurer. But her campaign for governor was said to get a boost not by something she did, but by something her male competitor, Clayton Williams, a Republican, said.

Surrounded by reporters at his ranch, Williams compared the day’s bad, rainy weather to rape. “If it’s inevitable,” he said, “just relax and enjoy it.” After that comment, his lead dwindled and Richards won.

Electing more women to state legislatures may help reduce some of the masculine culture that allows discrimination to proliferate, Sinzdak said. In many state capitols, men take advantage of time away from home to create a “fraternity-like atmosphere.”

Some female state legislators say they avoid certain situations, such as evening receptions or social hours, out of fear of harassment, Sinzdak said, and they know that holds women back. Those gatherings are often when important conversations take place.

“Policy gets decided on the golf course or at the bar,” she said.

In Texas, men — purposefully or not — often leave women out of important discussions, Howard said. “We have to work harder to get a seat at the table. But if it means we have to bring our own chair to the table then so be it.”

Thompson said she has a harder time raising money than her white male colleagues in part because she’s a woman and she’s black. Female lawmakers across the country report that it’s harder for them to fundraise than men, although research shows no gender disparity.

There are times when a woman is overlooked for a committee chair seat, Thompson said, or is replaced in a chair seat with a man with less experience.

Emerge America’s Gholar says balancing the makeup of legislatures will not only reduce discrimination, but also change the policy discussion and the type of state laws that are enacted.

In Nevada, for example, the organization helped five Democratic women get elected in 2016. This year, the state ratified the Equal Rights Amendment.

In Texas, Thompson proposed an amendment that created the state’s first alimony law, and authored bills that were enacted into law requiring insurers to cover more forms of birth control, HPV screening and mammograms. She agrees that having women around changes the conversation. And she is hopeful that the movement this year will bring full respect for women, and an end to harassment.

“I am really optimistic that the squeeze will be worth the juice.”