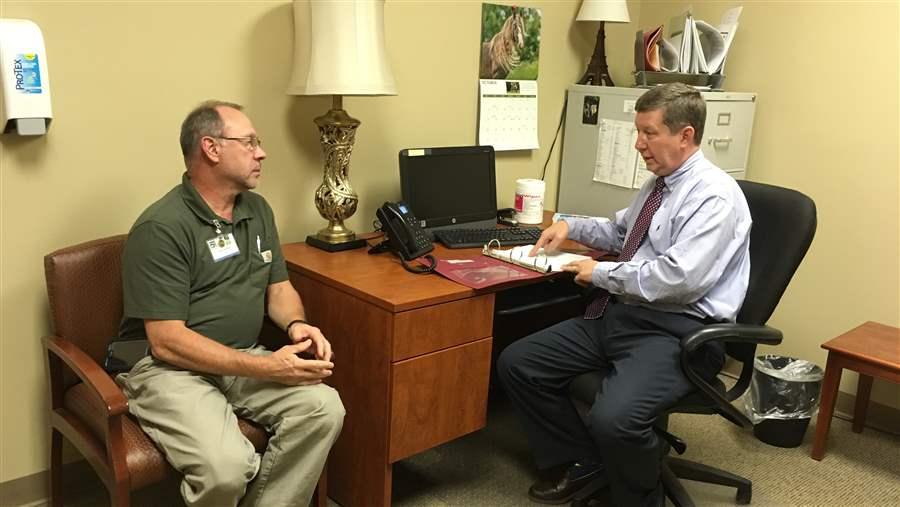 Editor's note: This story was updated to correct the number of states that allow doctors to complete specialized treatment plans rather than lose their license because of a mental health condition, drug or alcohol addiction, or both.

WARRIOR, Ala. — The day Dr. Arthur Green (not his real name) checked into his rustic cabin here at Bradford Health Services, he said he doubted he could beat his decadeslong struggle with alcohol and find joy again in treating patients. Three weeks later, he said, he was convinced otherwise.

For Dr. Mary Waters (not her real name), it took six weeks to see a way out of her depression, anxiety and addiction to prescription painkillers. But now she says she’s confident and excited to return to practice.

They are among hundreds of physicians from across the country who come to this quiet, pine-shaded retreat 25 miles north of Birmingham, where they can get mental health and addiction treatment without jeopardizing their medical licenses.

Bradford’s addiction treatment regimen isn’t unique — more than a dozen other addiction centers across the country offer similar programs — but when combined with other services offered by state organizations known as physician health programs, it is extraordinarily effective.

Studies have found that these confidential programs have about an 80 percent success rate, far higher than the typical success rate of 50 percent for the general population. Researchers believe its rewards-based strategy and extensive follow-up care could help many more of the roughly 20 million Americans who suffer from opioid and other drug and alcohol addictions.

The average person who is addicted to opioids and other substances relapses multiple times before maintaining long-term sobriety, even when treated with highly effective addiction medications and evidence-based behavioral therapies. In an opioid epidemic that is killing more than 170 Americans every day, finding effective addiction treatment can make the difference between life and death. 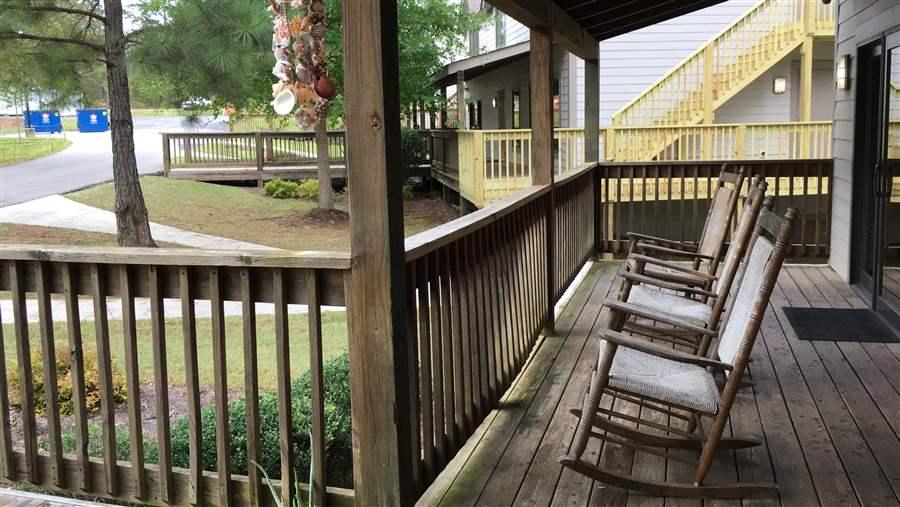 A cottage at Bradford Health Services in Warrior, Alabama.

More than one in 10 doctors become addicted to drugs or alcohol, a slightly higher rate than in the general population. Burnout, a recognized problem in the medical professions, and the easy availability of drugs likely make addiction more common among doctors.

Nearly all states allow doctors to complete specialized treatment plans — such as an in-patient stay at Bradford or a similar facility — rather than lose their license because of a mental health condition, drug or alcohol addiction, or both.

In some cases, doctors who suspect they have a mental health problem or addiction that may be affecting their work seek help from the programs on their own. But most physicians are required by an employer, licensing authority or the U.S. Drug Enforcement Administration to seek treatment if they want to keep their medical license.

The first step is a mental and behavioral health assessment. Next, doctors sign a contract agreeing to complete four to 12 weeks of residential treatment at an approved facility of their choice and submit to a five-year drug and alcohol monitoring program.

If a doctor relapses after treatment, his or her license may be suspended. And if the relapse raises concerns of patient endangerment, the license can be revoked.

According to a survey of close to 40 program directors, nearly 80 percent of doctors remained sober throughout the five-year program, and 70 percent continued to practice medicine.

Dr. Robert DuPont, a co-author of the survey and a former White House drug czar under President Richard Nixon, maintains that a key principle of the program can be effectively applied to other people with addiction.

It’s not just that most physicians are affluent, highly motivated and compliant, he said. The secret to the program’s success is the way it manages relapses using swift and meaningful consequences, DuPont said.

For doctors to remain sober after they return to high-stress jobs with easy access to controlled substances, there has to be a big payoff. For physicians, the reward is huge — keeping a medical license that cost them hundreds of thousands of dollars and years of their lives to obtain.

Outside of the medical profession, treatment providers can leverage equally important rewards, DuPont argues. For a parent, it could be custody of a child, and for a criminal offender, it could be freedom from jail time. For others, monetary rewards have worked.

Dr. Lynn Hankes, a former director of the Washington state physician health program, said another critical ingredient is the five years of random drug tests and follow-up support. Most people who undergo treatment get no follow-up care, he said.

Doctors and other health care professionals are particularly vulnerable to relapse. Symptoms of burnout, which they may have been treating with drugs and alcohol, don’t necessarily go away when they stop using. And once they’re back on the job, they have ready access to opioids and other controlled substances. That’s why the random drug tests and follow-up support are so critical to the program’s success, Hankes said.

At Bradford, in a group class of 12 casually dressed doctors and a counselor, the biggest concern is getting back to work.

A physician from Washington state sits on the edge of his metal folding chair and anxiously asks the counselor whether he will be required to live in sober housing when he returns. Another doctor questions the length of her treatment plan: Is it possible she could end up leaving sooner? Several worry that random drug tests won’t fit into their intensive daily routines. Exactly how do they work?

Doctors tend to be compliant and they believe in the evidence that backs up the treatment program, but they’re used to being in charge, said Dr. Michael Wilkerson, Bradford’s medical director. Following someone else’s rules isn’t always easy for them.

“When they first get into treatment, they do it because they feel the heat,” he said. “If they’re going to stay in recovery, they need to see the light. They need to buy into the benefits of recovery.”

Nationwide, physician health programs, though designed to make it easier for doctors to seek help for addiction, have been criticized by some for being too punitive. Others have argued the programs are too lenient and put patients at risk.

Linda Bresnahan, director of the Federation of State Physician Health Programs, noted that physicians who complete a treatment and monitoring program are better equipped to handle stress and less likely to endanger patients. A study in Occupational Medicine showed that doctors who graduated from Colorado’s physician health program had a 20 percent lower malpractice risk rating.

Most physician health programs are 12-step or similar abstinence-based programs, in part because many state medical boards have concerns about allowing doctors to practice if they are taking maintenance drugs such as methadone or buprenorphine.

In some cases, Bradford and other facilities offer Vivitrol, a long-acting, non-narcotic addiction medicine that blocks the euphoric effects of opioids and alcohol and reduces cravings.

In October, doctors came to Bradford leaving jobs and families behind in Arkansas, California, Georgia, Massachusetts, Mississippi, North Carolina, Oklahoma and West Virginia, as well as other parts of Alabama.

Why do doctors travel so far to be treated at specialized treatment centers? Wilkerson said the major attraction is other physicians. In recovery himself for 25 years, he explained that one of the biggest challenges anyone with a drug or alcohol habit faces is overcoming the guilt and shame connected with addiction.

“Doctors typically hold themselves to a high standard. They need to know that they are not alone,” he said. Sharing a cottage with 15 other doctors and providing mutual support in group meetings reinforces that.

Green, a 39-year-old surgeon, said he was ready to quit practicing medicine when a colleague told him about the physician health program. His wife had filed for divorce, he was depressed, and he said his way of dealing with stress was to throw himself into his work and drink heavily on his days off. “I seriously considered suicide,” he said.

Waters, 54, not only got treatment for her addiction to painkillers at Bradford, but she also saw a pain specialist who put her on a non-opioid drug that’s helping her neck and shoulder pain. She too was ready to give up on being a doctor, she said, but with a big balance left on her medical school loan, she said she couldn’t afford to.

As for the five years of random drug screenings they face, both Green and Waters, now confident they can continue doctoring, said they weren’t worried.

“This is a lifelong deal. I know that,” Green said. “But for the first time in at least 25 years there’s hope that I don’t have to go on living the way I’ve been living.”