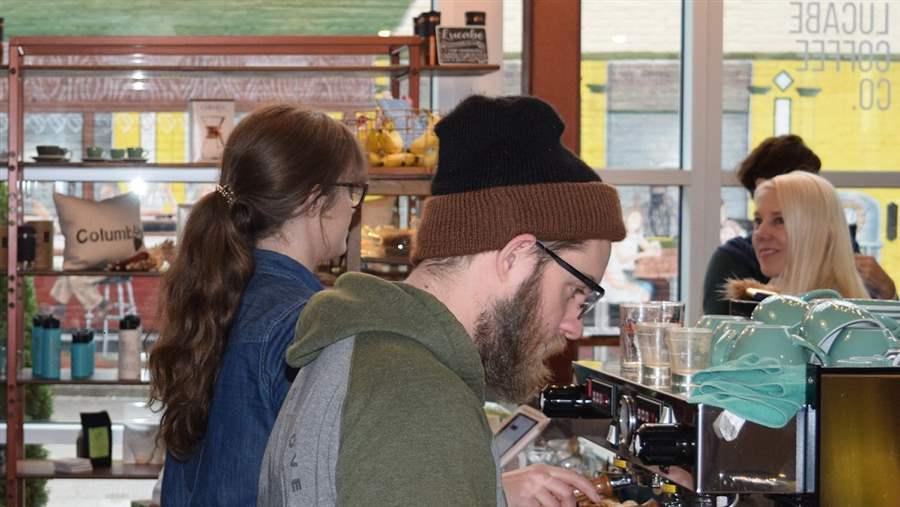 The Lucabe Coffee Co., a coffee shop that opened this year in downtown Columbus, Indiana, is one of the signs of a new influx of young people. It was started by a married couple who moved to the small town for work.

COLUMBUS, Ind. — Tyler and Alissa Hodge, two of the hundreds of young professionals who have moved here in recent years, noticed that despite the influx there was not a single city-style coffee shop downtown.

So the couple opened one in May, with sofas, baked goods and local micro-roaster beans, adding a play area as a nod to the family-friendly culture of this southern Indiana city and their own three children.

“The 18- to 35-year-olds expect something like that, but they just didn’t have it,” said Tyler Hodge, 32, who used crowdfunding to help finance the shop. The same tactic was used for a rock climbing gym opened in September by a group of young engineers who, like Hodge, spend their weekdays working at Cummins Inc., the diesel engine company that is the city’s largest employer.

“There’s not that much to do here for the young people,” said Juan Valencia, a 25-year-old Colombian immigrant who is one of the founders of the climbing gym. “We think this will help.”

Before the gym opened, aficionados had to drive an hour north to Indianapolis or south to Louisville, Kentucky, for an indoor climbing wall.

As the economy improves and millennials move around the country in search of jobs, some are finding themselves far from the youth culture they learned to expect from city life in other parts of the country. But the tradeoff can be a less burdensome cost of living, a more tightknit community, and a chance to make new towns their own.

A Stateline analysis of census data showed the Columbus metro area at the top of a list of cities that have attracted young, educated people from out of state, yet are still relatively affordable.

There are other areas whose young, educated populations are growing nearly as fast as some of the most famous youth magnets like Silicon Valley; Austin, Texas; and Nashville, Tennessee — but with more affordable housing. They include Midland, Michigan; Bloomington, Illinois; Idaho Falls, Idaho; Sioux Falls, South Dakota; and Bismarck, North Dakota; Morgantown, West Virginia; Cedar Rapids, Iowa; Blacksburg, Virginia; and Rochester, Minnesota. 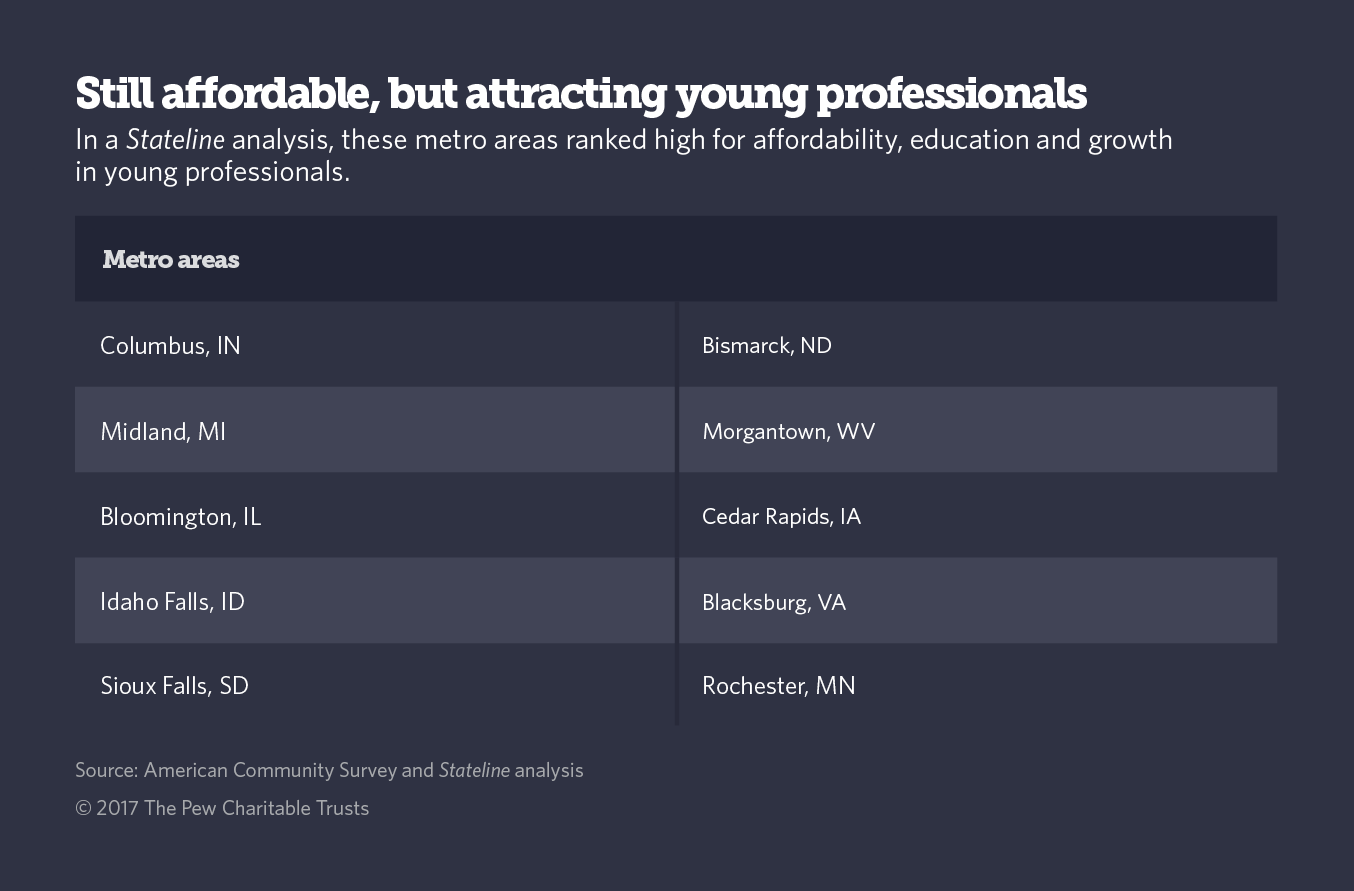 In Columbus, the number of people ages 25 to 34 with a college degree has increased 62 percent since 2010, yet less than 20 percent of a typical household’s income goes to housing.

Cummins has been on a hiring spree, and other young people have gravitated to the city’s small town feel.

This Columbus has some buzz, if not as much as the Ohio city of the same name. A new movie, “Columbus,” has drawn fresh attention to the city’s quirky modernist architecture, which Cummins has supported, through a foundation, by subsidizing the design of public buildings by world class architects for 60 years. Columbus is also the hometown of Vice President Mike Pence.

An October analysis by ATTOM Data Solutions, which collects real estate data, counted Denver, Austin and Nashville among the “meat and potatoes” markets with looming affordability crises because home prices are rising faster than wages. The firm blames refugees from high-cost states and investors who buy up rental properties.

Still-affordable cities like Columbus “may be attracting young people but they don’t have that ‘it’ factor yet, like an Austin or a Nashville or an Asheville [North Carolina],” said Daren Blomquist, an ATTOM vice president.

For the youth culture to continue to evolve, more artists may need to join engineers in starting businesses, Blomquist said. “They need a critical mass of creative types doing their thing in these towns, and those people might not be there yet.”

Jonathan Nesci, who designs metal furniture using some of the metal shops that serve Cummins, may fit the bill. He visited Columbus from Chicago in 2014 to work on the annual Exhibit Columbus project, which places temporary art installations in town to complement some of the architectural landmarks. (One of this year’s highlights is an installation of large timber discs intended to encourage people to circulate around a Henry Moore sculpture that sits in front of a public library designed by I.M. Pei.)

At 33, Nesci decided to move here with his wife and two children. His rent is less than what he paid in Chicago, and his home has more than twice the space.

“We could live anywhere. But almost as soon as I saw it I knew this was the place for us,” Nesci said. “The architecture is a huge factor, and the city’s support for it, the way that the city has embraced design.”

Just attracting more young people is a major accomplishment for cities, said William Frey, a demographer at the Brookings Institution, a nonpartisan think tank, but they may not remain affordable.

“As these ‘real America’ towns become more attractive to today’s upwardly mobile youth, they should come to expect a rise in housing prices along with more upscale millennial amenities,” Frey said.

In Columbus, there’s a downtown ice cream parlor with an old-fashioned soda fountain and bow-tie-clad servers. But the area has become more lively in recent years: There are cavernous bars with live music, a microbrewery that serves “Diesel Oil Stout” in homage to Cummins, new white-tablecloth restaurants — and it can be hard to find a parking space at night.

Houses in the Columbus area typically cost less than $150,000, which is lower than the median value in two-thirds of the nation’s metro areas. But the influx of young professionals has started to put pressure on prices. The median rent for a one-bedroom apartment is $750, in the top 27 percent of metro areas, according to 2016 data from the U.S. Census Bureau. Young newcomers described rents between $850 and $1,200 in the coveted downtown area near the Cummins headquarters.

Kyle Hendricks, 33, said he feels fortunate to have a one-bedroom apartment for $600 a month about a mile from downtown. Before moving here four years ago from Los Angeles, he said he was paying $1,000 a month for “literally a single room in a house.”

Continued affordability may depend on how quickly housing can be made available to new residents, said Deirdre Pfeiffer, an associate professor and urban planning expert at Arizona State University who has studied the migration of millennials.

“Places where the housing market is slow to respond, or government is more restrictive in terms of zoning, will have greater affordability issues,” Pfeiffer said. Hundreds of apartments are under construction in Columbus, according to Cindy Frey, president of the Columbus Area Chamber of Commerce, with some set aside for low- and moderate-income residents that will rent for less than $400 a month. 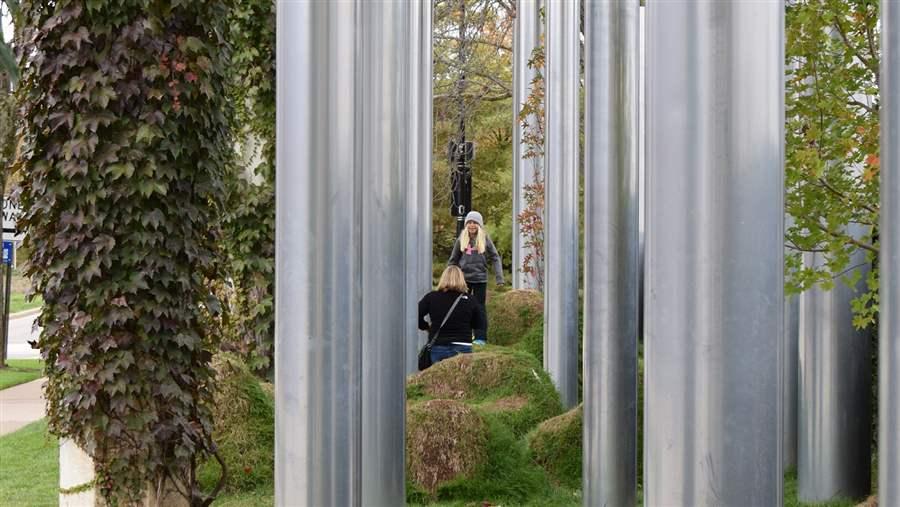 “Anything Can Happen in the Woods,” an art installation in Columbus, Indiana.

Cummins has a large and growing need for engineers, said John Burnett, a former Cummins recruiter who now runs an educational nonprofit in the region. Engine manufacturing was once a manual, blue-collar task, Burnett said, but many of today’s jobs require computer programming and other engineering skills.

“People say we’re a manufacturing town, but the work that goes on now is very different. These are knowledge workers,” Burnett said. “There are a lot of engineers and other professional young people coming to the community because they possess that knowledge.”

Many of the young professionals who work in Columbus have come from out of state, or from abroad. Burnett’s Community Education Coalition is working with local high schools and colleges to get more locals a share in Cummins’ success.

Welders, technicians and equipment repair specialists can make annual salaries of $50,000 to $80,000 with two years or less of college training, he said, and the coalition is getting those courses into local community colleges and helping high schools prepare students for them.

“We don’t want to create a bifurcated society like you see in some other cities, where you have a lot of smart young people moving in but you’re not paying sufficient attention to the people who are here,” Burnett said.

The relatively new youth culture in Columbus has even drawn some native sons and daughters back home from bigger cities.

Jessie DeWeese, an attorney in her 20s who has lived in Chicago and Cleveland, had job offers in several cities but opted to move back to her hometown about 18 months ago.

“As soon as I arrived, just random acquaintances were saying, ‘Oh, you want to practice law? Go talk to so-and-so.’ And now I have a job,” DeWeese said. “When you’re in the big city, people didn’t care about each other that much. Here everyone holds each other up and cares about the city.”

Tyler Hodge, the coffee shop owner, is a Tennessee transplant who’s lived in Florida, Washington, D.C., and Brazil. Columbus, he said, has “really been a draw of young talent into an area that wouldn’t ordinarily be sought after — in the middle of the Midwest, surrounded by cornfields and soybeans.”

Hendricks, who like DeWeese moved back here to his hometown four years ago, said the change in Columbus has been radical, as more young people have moved in, but it has yet to evolve into a real youth culture.

“Growing up here, the diversity was not here, the young college-educated folks weren’t here except for engineers,” said Hendricks, a United Way marketing coordinator who is on a committee of young people lobbying city officials for a skate park.