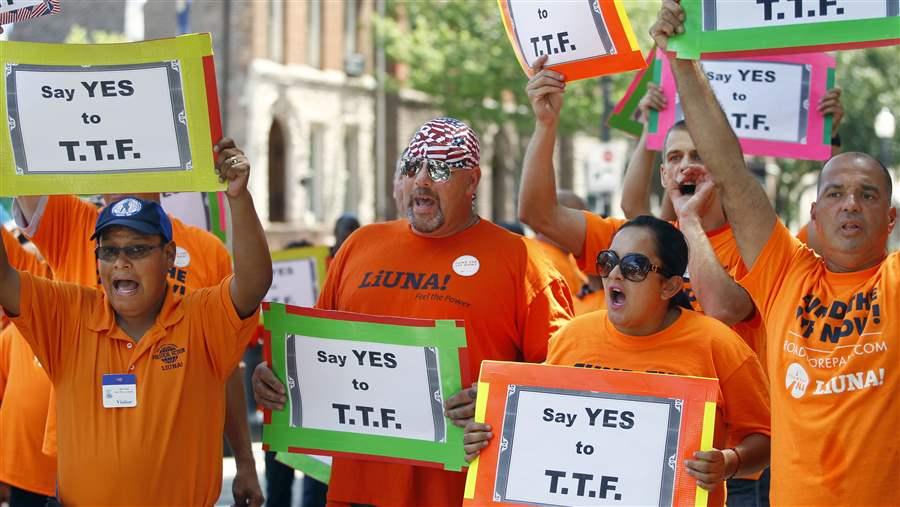 New Jersey construction workers rally in favor of a gas tax hike, which was enacted. The increase was packaged with the elimination of the state’s estate tax and a cut in sales taxes.

Editor's Note: The graphic in this story was updated 11/2 to add Illinois to the states with an estate tax.

The group got nowhere. Defenders of the tax argued that the cash-strapped state needed every penny it could get, and that it was fair to levy an extra tax on the estates of the rich.

Then late last year estate tax opponents finally succeeded: They packaged the eventual abolition of that tax with a bunch of other tax hikes, including a huge increase in the gasoline tax that brought New Jersey from the second-lowest gas tax in the nation to the eighth-highest. Under legislation Republican Gov. Chris Christie signed in 2016, the estate tax exemption rose from $675,000 to $2 million this year and will be eliminated in 2018.

New Jersey will retain its inheritance tax, which is assessed on individual bequests rather than on overall estates.

That’s been the pattern in many states that have scrapped the estate tax or increased the amount of the estate that is exempt: By eliminating the estate tax as part of a package that raises revenue from other sources or puts money into other priorities, such proposals have won the support of both Republicans and Democrats.

In 2001, every U.S. state imposed either an estate or inheritance tax. But that year, the federal government eliminated its income tax credit for such payments — and the repeals began. By 2018, only 17 states will have an estate tax, an inheritance tax or both. 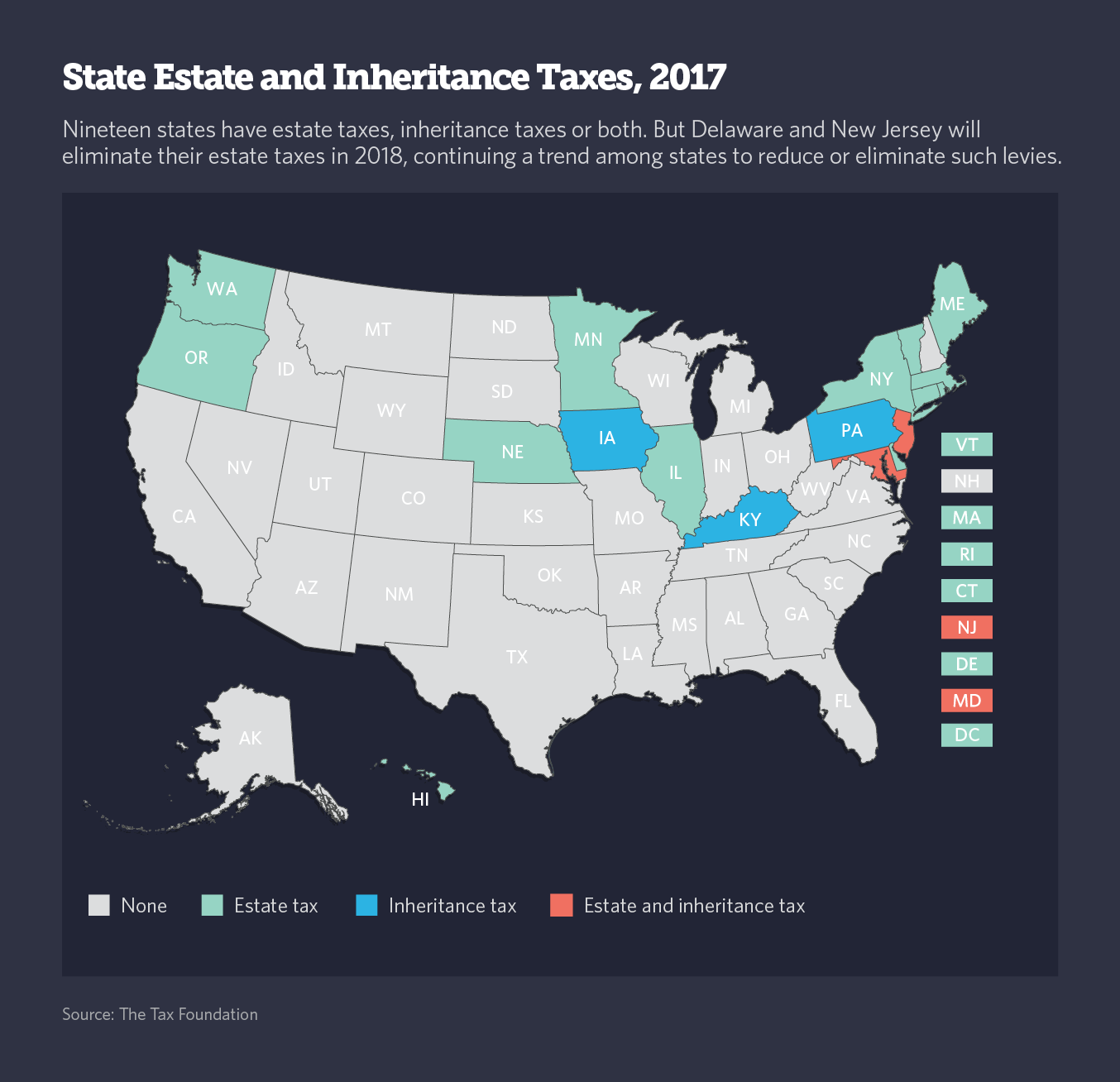 In recent years, Tennessee (2016), Georgia (2014), Indiana, North Carolina and Ohio (all in 2013) also have eliminated their estate or inheritance taxes.

Democratic Gov. Mark Dayton, who argued that the state couldn’t afford the loss in revenue, allowed the legislation to become law without his signature. He said that the compromise contained some things that he supported, including child care tax credits, property tax relief for farmers, and increased government aid to cities.

Maryland next year will raise its exemption from $3 million to $4 million, under a 2014 law. Maryland’s Senate president, Mike Miller, a Democrat, supported the legislation, though he said he was reluctant to do so. As a tradeoff, he urged the Legislature to raise the minimum wage. It did, and the wage went to $9.25 in 2017.

In D.C., the exemption level doubled to $2 million at the start of 2017, and is set to go up to $5.5 million in 2018. The item, which was part of the city’s budget, was made possible by a surplus in revenue. To stave off critics, the council also put more money into school funding and paid leave.

Jared Walczak, senior policy analyst for the Tax Foundation, a conservative group that generally believes in lower taxes on a broader base, said that tradeoffs often do make the difference on tax policy. He noted New Jersey’s trade, eliminating the estate tax but raising the gas tax, means more people will pay a little, rather than just a few rich families paying a lot, spreading the pain.

Walczak explained that the estate tax is a relatively small source of revenue — in fiscal 2016, state inheritance and estate taxes raised $5.1 billion, accounting for 1.4 percent of state tax collections in the states that have the taxes. It is also a volatile revenue source, since it depends on when someone dies.

Delaware this year also enacted legislation to repeal the estate tax, despite facing a $400 million budget hole. Similar to New Jersey, the change in Delaware, which takes effect in 2018, was negotiated during larger budget talks. It was signed into law by Democratic Gov. John Carney just days after a budget that included tax increases on real estate transfers and corporations.

Republicans had sought the estate tax repeal in exchange for their support of the corporate tax hike, which Democrats expected to bring in more revenue.

Delaware state Rep. Paul Baumbach, a Democrat, said getting rid of the estate tax — which brought in an average of $3 million to $5 million a year — in return for a $100 million projected increase in other revenue, was “an easy decision to make.” He said he is attuned to the voices of liberals in his state who opposed it, but “when they realized it was a 20-to-1 tradeoff, they understood where it came from.”

On the Republican side, state Rep. Michael Ramone had long argued that the estate tax was driving wealthy residents to declare one of their other homes as their “primary residence,” to dodge the Delaware estate tax. Financial advisers, he said, began to recommend that strategy, and he saw revenue drop, not just from the estate tax but from income taxes and other taxes that the rich residents would normally have paid.

“The closer they got to dying,” he said, “the more money managers were recommending that they establish residency elsewhere.”

With the help of the financial managers, Ramone compiled a list of names of ultra-rich people who were willing to talk to legislators about their strategy in private, but he said that was not needed once he showed lawmakers the math on how their leaving such a small state, where rich people have outsized influence on revenue, would hurt the bottom line. “There was no public campaign. We were just educating people.”

But Baumbach pooh-poohed the notion that attorneys were advising their clients to move to Florida because of the Delaware estate tax. “I call shenanigans on that,” he said, “I think they want no winters.”

Gift to the Wealthy?

The New Jersey tax compromise included a 23-cents-per-gallon hike in the gas tax, bringing it to 37.5 cents a gallon. The legislation also cut $1.4 billion in other taxes, including income taxes on elderly residents who can now exempt the first $100,000 of retirement income (a couple) from state income tax.

Supporters said the tax break for middle-income seniors was a way to counter arguments that eliminating the estate tax was a gift to the wealthy. New Jersey took in nearly $320 million in estate taxes in 2014. The increase in the gas tax is expected to raise more than $1 billion a year.

Michele Siekerka, president and CEO of the New Jersey Business & Industry Association, said she had talked to lawmakers many times about its members’ concerns about the estate tax. A small-business owner, for example, told her if they got hit by a bus tomorrow, their children wouldn’t have the liquidity in the business to pay the estate taxes, she said.

Her organization commissioned a study in 2016 that found New Jersey lost more than 2 million residents from 2005 to 2014, which resulted in $11.4 billion in lost economic activity, including spending, taxes and investments. The report said that of the 34 states that attracted New Jersey retirees, 20 have no estate and inheritance taxes, among them Florida and North Carolina.

But William Frey, demographer at the Brookings Institution, a nonpartisan think tank, scoffed at the notion that the estate tax played a major role in those moves, especially for rich people who would have been subject to it.

“Broadly, people move for all kinds of reasons, and taxes are not the main reason,” he said. “Snowbelt-to-sunbelt migration is going to continue to happen. A lot of it has to do with the weather and the high cost of living, of which taxes are a piece of it, but not the whole thing.”