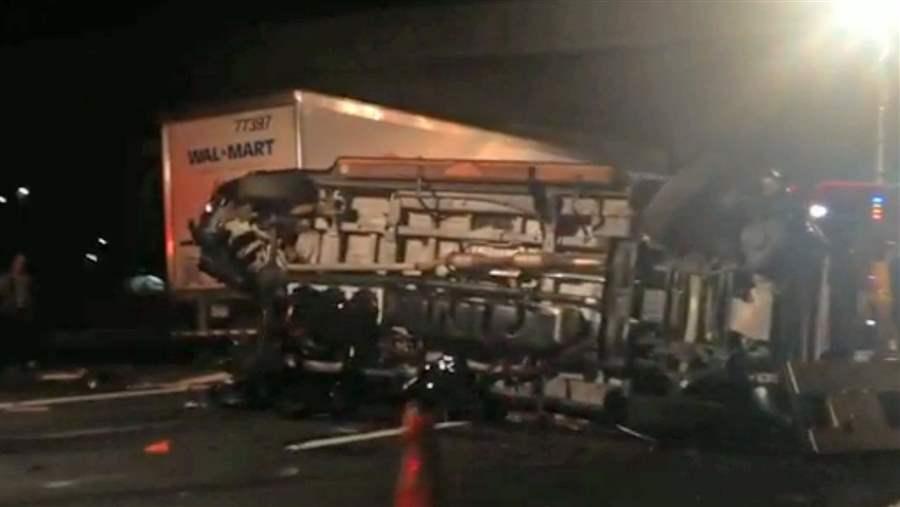 Comedian Tracy Morgan was seriously injured and his friend was killed after a fatigued Walmart truck driver struck their limousine bus on the New Jersey Turnpike in 2014. Traffic safety advocates want states to do more to step up enforcement of drowsy driving and offer police officers training to detect when a driver hasn’t gotten enough sleep.

© Will Vaultz Photography via The Associated Press

Whether it’s working the night shift, caring for a newborn, studying all night for exams, or simply living in a 24/7 society, Americans are sleep-deprived — and that can be deadly on the nation’s roads.

To draw attention to the problem, some states have passed resolutions, posted messages on highways, and required information to be included in driver’s education courses and driver’s manuals. But few have stepped up enforcement, trained police officers to detect when a driver hasn’t gotten enough sleep, or enacted criminal penalties if drowsy driving results in a fatality.

This year, legislators in New York and Washington state introduced measures that would have made it a felony for a fatigued driver to cause a crash that kills someone. There was a public hearing on the Washington state proposal, but neither bill has passed.

Only two states, Arkansas and New Jersey, have enacted such laws, but meeting the standards for prosecution and conviction is difficult. Arkansas, which considers it negligent homicide, requires that the driver hadn’t slept for 24 consecutive hours and New Jersey, which calls it vehicular homicide, does the same, but sets the time at more than 24 hours.

But those states have had “limited success” convicting drowsy drivers under the statutes, according to a 2016 report by the Governors Highway Safety Association (GHSA), which represents state highway safety offices. Arkansas had only three convictions since 2013, when the law took effect.

One reason it’s tricky: When a fatigued driver is stopped by police, adrenaline usually kicks in and he doesn’t appear to be sleepy.

“We don’t have a sleep meter, like we have a breathalyzer, so it’s difficult to recognize drowsy driving,” said Pam Fischer, the Governors Highway Safety Association consultant who wrote the report. “It’s hard to prosecute, hard to make the case, and hard to enforce unless the driver readily admits it.”

Fischer said states need to do a better job training police officers to spot drowsy drivers on the road and to recognize some of the telltale signs if they pull them over or arrive at the scene of a crash. Officers also should ask drivers how much sleep they got in the past 24 hours, put that information in their report, and warn them about the dangers of drowsy driving, she said.

A 2014 study by the AAA Foundation for Traffic Safety estimated that drowsy drivers could be involved in 328,000 crashes a year on average on U.S. roads, 6,400 of them fatal.

But AAA says the actual numbers may be higher, because the data collected by police at crash scenes is incomplete and there is no universal definition or standard wording for drowsiness or fatigue on crash reports.

Lots of Americans are suffering from sleep deprivation, health officials say. A Centers for Disease Control and Prevention study last year found that more than a third of adults in the U.S. aren’t getting the seven hours of sleep a day needed for optimal health.

And when they get behind the wheel, drowsy drivers’ judgment may be impaired and their reaction time slowed, just like with drunken drivers. Their driving often mimics alcohol-impaired driving, with the car weaving between lanes or drifting off the road.

Among those most vulnerable: shift and night workers, teens and young adults, and truck and bus drivers.

A December 2016 study found that drivers who miss one or two hours of the recommended seven hours of sleep in a 24-hour period nearly double their risk for a crash. Those who miss two to three hours more than quadruple it. And nearly one in three drivers said that at least once in the past month, they drove when they were so tired they struggled to keep their eyes open.

Some states are beginning to take modest steps to deal with the problem.

Last year, Iowa hosted the first statewide drowsy driving summit to increase public awareness of the problem. It also broadcasts warnings on highway system message boards, such as “Drowsy? Crash on a Couch Not a Road,” runs public service announcements on TV and social media, and has partnered with a local supermarket chain to spread the word with bag stuffers.

Iowa will use its grant money to post signs, stickers and rack cards in every state rest area reminding people about signs of fatigue and urging them to take a quick nap if they’re tired.

“The main thing is to get people to talk about it,” said Patrick Hoye, bureau chief for the Iowa Governor’s Traffic Safety Bureau. “We need to educate the public that this is a serious issue and it’s causing fatalities in our state.”

Traffic safety experts recommend that states make sure there are enough rest areas available, so tired drivers can pull off the road and take a nap. But they worry that some states instead have been shutting down their highway rest stops. Illinois is the latest to study whether it should rehab or close some of its rest areas.

“Closing rest stops doesn’t help with the drowsy driving problem,” said Fischer, the GHSA consultant. “The only thing that helps you when you’re tired like this is to get sleep.”

Educating the public is important, said Jennifer Pearce, whose sister, Nicole Lee, was killed in a drowsy driving crash in 2008.

Lee, 18, and four friends were returning to Virginia Tech after a day of skiing when the SUV she was riding in crashed head-on into a tree in West Virginia.

Everyone was wearing their seat belts. Police ruled out drugs or alcohol and said the driver wasn’t speeding and there were no skid marks. They believe he had fallen asleep at the wheel.

“It was incredibly painful because it was completely preventable,” said Pearce, who has become an advocate for making the public aware of the dangers of drowsy driving. “We need to make sure that people understand that being drowsy is the same as being drunk or distracted when you get behind the wheel.”

But they argue that the biggest change needs to be cultural.

“Many of us are guilty of driving while drowsy. It’s socially acceptable,” said Kara Macek, a Governors Highway Safety Association spokeswoman. “We’ve got to change the mindset culturally — that it’s not OK. You are impaired.”