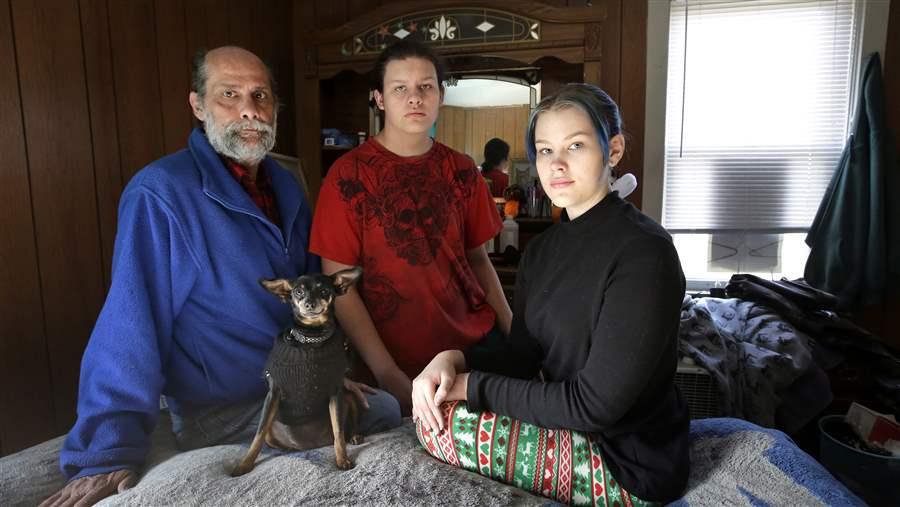 A family that was evicted from their home in Rhode Island. To combat homelessness, some cities have created legal defense funds for families that face eviction.

In much of the country, more and more renters are devoting larger and larger portions of their income to rent. For low-income families, this can push them further into poverty and put them at risk for being evicted — and becoming homeless.

Evictions destabilize families, forcing them into poorer neighborhoods with higher crime rates. And evictions cost cities money: After a family is evicted, a city can end up losing thousands of dollars in property taxes and unpaid utility bills, and may have to bear increased costs from homeless shelters and hospitals.

To address the problem, some cities are trying a new tactic: provide tenants with free legal counsel in housing court. In eviction proceedings, the vast majority of landlords, 85 to 90 percent in some housing courts, show up to court with a lawyer, while tenants often face eviction without legal counsel.

The idea is that tenants with lawyers have a better chance of reaching agreements with landlords so they can stay in their homes — and avoid having an eviction on their record, which makes it harder to find another place to live.

Without a lawyer, eviction proceedings can be hard to navigate. Tenants often don’t realize that they can, for example, use housing code violations as a defense for nonpayment. A judge makes the final eviction decision, but often tenants and landlords can work out a deal before it gets to that. One study found that two-thirds of tenants who had a legal aid attorney were able to stay in their homes, compared with a third of tenants who represented themselves in housing court.

Even showing up to court and having one’s case heard can be a challenge. That’s because housing courts “can be bursting at the seams,” with dozens of cases rushed through the docket, said Michael Lucas, deputy director of the Atlanta Volunteer Lawyers Foundation, which provides free representation to low-income tenants in housing courts. “If you don’t pull off parking and security just right, you could get evicted just for being five minutes late.”

In August, after years of wrangling and a class action suit dating back to the ’80s, New York became the first city in the country to guarantee all families that face eviction the right to legal counsel in housing court. The city plans to spend $155 million each year on the program.

Inspired by New York’s effort, in May, Washington, D.C., set aside $4.5 million for a grant program that will pay the legal fees of families that face eviction. In June, Philadelphia approved $500,000 in funding to provide legal defense to low-income renters who face eviction.

“We’ve got what I view as a crisis in affordable housing,” said D.C. Councilman Kenyan McDuffie, a Democrat who sponsored the D.C. measure, which was first introduced last year. When the legislative calendar ran out, the bill was added to the district’s 2018 budget.

“This isn’t just about building new units,” McDuffie said. “It’s also about protecting tenants from unjust evictions and not creating housing insecurity in the first place.”

In Los Angeles County, which had 56,000 eviction filings in 2016, officials have just started to set up an eviction defense program. Next year, the county will spend $8.5 million on counseling, as well as legal and financial assistance, for families and individuals at risk of eviction.

In January, Boston Mayor Martin Walsh, a Democrat, asked state lawmakers to introduce legislation in the Massachusetts Legislature to address tenants’ rights issues. One of the bills would make legal representation in eviction proceedings a right and would guarantee legal representation.

In recent years, some states, such as California, have experimented with pilot programs that provide funding for some form of eviction defense. But New York’s new law codifies the practice and ensures that legal defense in housing court is an ongoing right and not contingent on political will or funding levels, said Maya Brennan, a research associate with the Urban Institute, a Washington, D.C.-based economic and social policy think tank.

Landlord advocates such as Adam Skolnik, executive director of the Maryland Multi-Housing Association, say they’re all for eviction defense funds for tenants — as long as property owners aren’t expected to foot the bill.

“Everyone should have a right to counsel,” said Tracey Benson, president of the National Association of Independent Landlords.

Even better, Benson said: If tenants can work out a deal with their landlords before they end up in court. Evictions are expensive for landlords, she said, because by the time they get to housing court, they’ve usually gone without rent payments for at least a month. If the tenant is evicted, it can take several months before landlords find and screen a new tenant, Benson said. 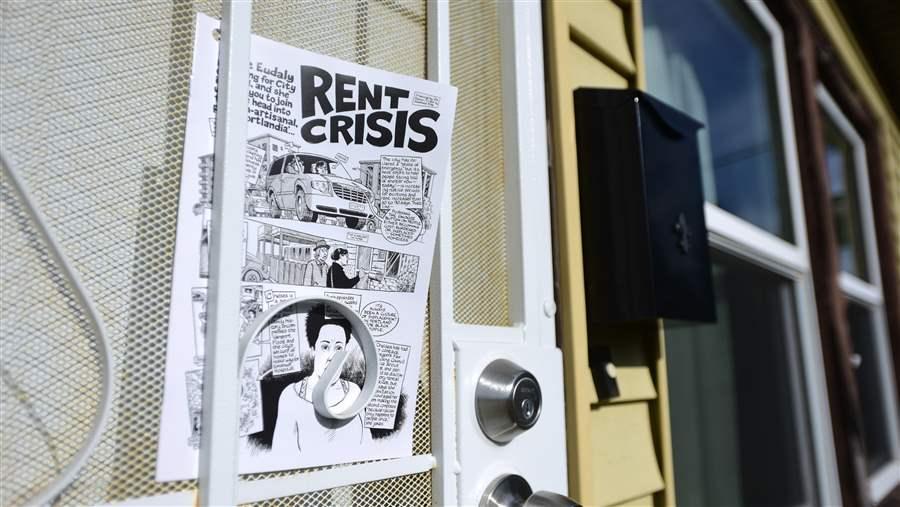 A comic about the affordable housing crisis on the door of an aging apartment complex in Portland, Oregon.

It’s virtually impossible to measure whether evictions are on the rise, because there’s no national database. (The U.S. Census Bureau plans to begin to track evictions this year.) Rent laws vary from state to state, and jurisdictions use different methods to track evictions.

Most evictions are informal and never reach the courts, Urban’s Brennan said. A landlord might send a letter to tenants demanding that they move out. Or they might lock a tenant out, pressure them to leave — or shut off the heat.

Formal evictions, cases that end up in housing court, are rarer, Brennan said. Most are about unpaid rent. But because some cases get resolved before the tenant and landlord end up in court, it’s hard to get an accurate picture of how many people are evicted, housing experts say.

Still, there are indications of an increase in the rate of displaced renters. According to an August report by the U.S. Department of Housing and Urban Development, “severe housing problems are on the rise.” The number of very-low-income renters who do not receive government housing assistance and who spend most of their income on rent, live in inadequate conditions, or both, has increased 40 percent over the past decade, the report found.

And a December report by Redfin, which analyzed public eviction records, estimated that 2.7 million people faced eviction in the U.S. in 2015. The report found that the lack of rental units drove up housing costs, while incomes have not kept pace with rising rents.

The new push for eviction defense in housing court is based on a number of factors, according to Megan Hatch, assistant professor of urban policy and city management at Cleveland State University.

The U.S. is increasingly a nation of renters: more than a third of Americans are renters, the highest percentage in 50 years. And as more low-income families are displaced by higher rents, cities are seeing that evictions are having negative, long-term impacts on families.

“They’re looking at the cost-benefit analysis,” Hatch said. “A little bit of money now can prevent all those social costs down the line.”

By law, anyone who faces criminal charges has a right to legal counsel, thanks to the Sixth Amendment and its application to the states in the 1963 Supreme Court decision Gideon v. Wainwright. There are no such protections at the civil level, such as in housing court or family custody hearings, said Andrew Scherer, policy direc­tor of the Impact Center for Public Interest Law at New York Law School, who helped craft the New York legislation.

For a while after the recession, federal law protected the tenants whose landlords were in foreclosure. But the Protecting Tenants at Foreclosure Act expired in 2014. Since then, some states and localities have stepped in with policies that let tenants stay in their homes under the same lease agreements if their building is foreclosed.

Advocates for eviction defense protections are part of the “right to counsel” movement: Even if they’re not charged with a crime, a day in civil court can be life-altering, with consequences such as losing your home — or your family, said John Pollock, an attorney and coordinator of the National Coalition for a Civil Right to Counsel.

Eviction can cause significant hardship to families and have an impact on childhood development. Women with children are much more likely to face eviction, and African-American women are disproportionately affected. Studies show the rise in evictions is linked with higher suicide rates. And people who are evicted are more likely to lose their jobs. The waitlist for public housing can stretch into the decades.

Facing eviction without a lawyer “is really an outrageous imbalance in the justice system,” Scherer said.

Avoiding Eviction in the Big Apple

Since the 1990s, New York City has provided some legal assistance to low-income families who face eviction, though funding has ebbed and flowed over the years. A February report by the city found that when the de Blasio administration increased legal assistance tenfold, to $62 million, evictions decreased by 24 percent and 40,000 more residents were able to stay in their homes in 2015 and 2016.

This year, the city started to guarantee free legal assistance to anyone who faces eviction. Families with incomes under $50,000 will have full legal representation, while those with higher incomes will have limited free counsel to avoid eviction.

The program will be phased in, ZIP code by ZIP code, over five years. The city estimates an additional 400,000 tenants each year will now have legal representation in housing court.

The legal assistance program will help keep families in their homes, help stem the increase in the city’s homeless rates, and, hopefully, said Scherer, the co-author of “Residential Landlord-Tenant Law in New York,” shore up the city’s rent-stabilized market.