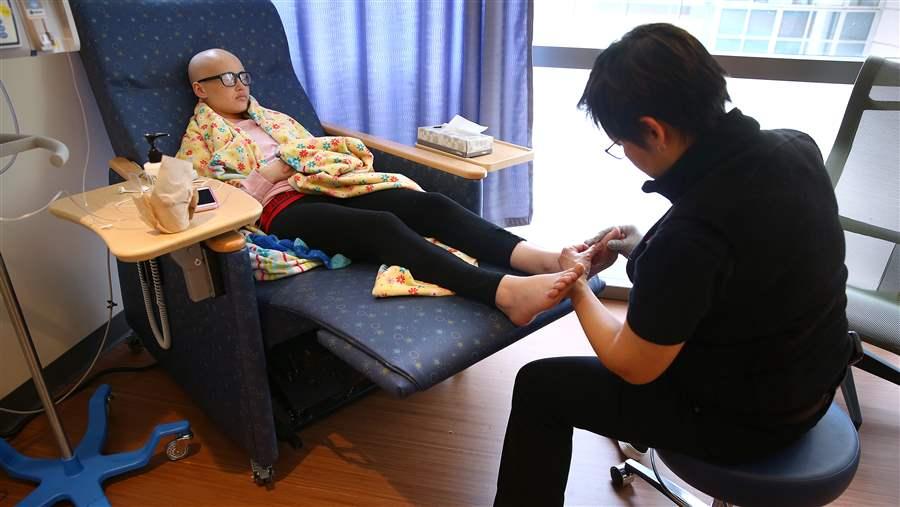 A patient receives massage therapy at the Dana-Farber Cancer Institute in Massachusetts. The state’s Medicaid program is seeking permission to exclude some new drugs, including cancer drugs, from its coverage to increase bargaining power with pharmaceutical companies.

In a move that could lead to lower drug prices for Medicaid programs across the country, Massachusetts is asking the Trump administration for the authority to exclude some new medicines from the state’s health program for the poor.

Amid a steep rise in prices for some medications that has strained state budgets in recent years, Massachusetts said that the change would give it leverage to extract lower prices from pharmaceutical manufacturers. And if the request is approved, health analysts say, many other states likely would follow suit.

States recently have taken other steps to lower drug prices or costs to patients. A number have enacted laws that require drugmakers to disclose their development and marketing costs in hopes that transparency may encourage them to lower prices. And some have limited out-of-pocket expenses for patients who use expensive specialty drugs, like many used to treat cancer and autoimmune diseases.

But Massachusetts’ waiver application is the most ambitious attempt a state has undertaken to gain negotiating leverage with drug companies over prices, at least in Medicaid.

“For a state to say ‘we are not going to cover that drug’ would be a very powerful tool” to pressure a manufacturer to offer a lower price, said Matt Salo, executive director of the National Association of Medicaid Directors. “This would be a highly motivating factor for manufacturers.”

In its request last month to the Centers for Medicare and Medicaid Services, or CMS, for permission to depart from regulations under Medicaid, the health plan for the poor that is funded by the federal government and the states, Republican Gov. Charlie Baker’s administration also asked for authority to run its own tests to show that the new drugs provide advantages over drugs already on the market.

President Donald Trump has been a vocal critic of high drug prices, railing against drugmakers as recently as last week for “getting away with murder” in pricing their products. And the Trump administration has said it wants to give states more control over their Medicaid programs, which Salo said boosts the chances that the Massachusetts request will be approved.

But it’s far from certain that the Trump administration will approve the request.

The powerful pharmaceutical industry opposes the proposal, which it says would violate the federal law that lays out the current Medicaid rebate system.

In a response to the state’s waiver proposal, the Pharmaceutical Research and Manufacturers of America (PhRMA) also disputes Massachusetts’ assertion that the Food and Drug Administration doesn’t adequately evaluate the clinical effectiveness of medicine it approves, sometimes using substandard testing techniques.

The state’s proposal, PhRMA said, is based on a flawed understanding of federal law and the FDA approval process, is contrary to science-based decision-making, and “seeks to supplant the expert opinion of the FDA and an individual patient’s treating physician with that of the Commonwealth.”

The industry has found allies among some groups that advocate on behalf of the poor and organizations that represent many health care constituencies. Massachusetts chapters of Planned Parenthood, the American Heart-Stroke Association, the National Alliance on Mental Illness, the American Cancer Society’s advocacy affiliate, and many other disease-related groups have filed objections with the state.

The concern among many is that patients will be deprived of medications that work best for them. “When you talk about cancer drugs, they are not all interchangeable,” said Kirsten Sloan, the vice president for public policy at the American Cancer Society’s advocacy arm, the Cancer Action Network. “We’re afraid this proposal could be limiting access to life-saving cancer therapies.”

Some of those groups, such as the American Heart-Stroke Association, the American Cancer Society and the National Alliance on Mental Illness, are funded in part by pharmaceutical companies.

Under current federal law, all state Medicaid agencies must cover any drug approved by the FDA. In return, the manufacturers must provide rebates to the states based on a set formula that, in general, results in at least a 23 percent rebate on the manufacturer price for brand-name drugs and 13 percent for generic drugs.

The rebate is higher if the price rises faster than the inflation rate, and can be increased further to meet the federal requirement that Medicaid pay the best price, in exchange for which manufacturers gain access to the program’s large patient population.

States can negotiate for additional rebates if they agree not to attach restrictions to new prescription drugs, such as the approval of an insurance company or that the medicine be given in limited quantities, which would necessitate frequent refills.

The rebates have not stemmed the rising cost of prescription drugs borne by state Medicaid agencies. Medicaid spending on prescription drugs grew by 42 percent between 2013 and 2015 to $31.8 billion, the most recent federal data show. Broken down by beneficiary, spending grew 36 percent between 2014 and 2016, according to Express Scripts, a pharmacy benefits manager that tracks drug spending.

In Massachusetts, state Medicaid spending on prescription drugs rose by 19 percent between 2014 and 2016, according to Sharon Torgerson, a spokeswoman for the state Department of Health and Human Services.

As part of its argument to CMS, Massachusetts contends that the requirement that its Medicaid program cover all drugs creates an incentive for some patients to enroll in Medicaid even when employer-sponsored commercial insurance plans are available to them, because those plans don’t cover the drugs their doctors have prescribed.

Rather than cover all drugs, Massachusetts is seeking permission to exclude drugs from its formulary, or list of covered drugs, as long as at least one medicine is covered for every “therapeutic class” — a group of medicines designed to treat a specific condition or illness — for example, antihistamines, anticoagulants, which prevent blood clots, or antianginals, which are used to treat angina.

Medicare, the federal health plan for the elderly, excludes some drugs, although it requires that at least two medicines be covered in each therapeutic class. The Veterans Health Administration and commercial insurers also use so-called closed formularies, which exclude certain drugs. One review of studies on closed formularies found that most drug exclusion policies result in cost savings.

The Massachusetts proposal is an attempt to replace “an unequal system with an equal system,” said Ameet Sarpatwari, assistant director of the program on regulation, therapeutics and law at Harvard Medical School’s Brigham and Women’s Hospital. It would give Medicaid the same leverage that other payers have, he said.

Massachusetts said the changes it seeks would enable the state to determine if new drugs offer distinct clinical advantages or cost savings over other medicines in their therapeutic class.

In its application, the state notes that many drugs that win FDA approval do not prove their clinical benefits because they use “surrogate endpoints.” In clinical research, a surrogate endpoint is a laboratory result or physical symptom that stands in for a clinical outcome. For example, the measurement of arterial blood pressure is a surrogate for heart failure.

Use of surrogate endpoints can speed up the drug approval process, but some medical experts say surrogates do not provide ironclad proof of a drug’s effectiveness. “Surrogate endpoints are not always true indicators or signs of how well a treatment works,” the National Cancer Institute says on its website.

In what many drug policy analysts say would be the most far-reaching aspect in Massachusetts’ proposal, the state wants to run its own tests on new drugs, in partnership with the University of Massachusetts Medical School. Not only would drugs have to win FDA approval, but they would have to show in the state’s tests that they provide advantages over drugs already on the market.

The industry says Massachusetts’ plan would delay getting life-saving treatment to patients who need them.

It is the exclusion of drugs from state Medicaid formularies that concerns organizations that represent different health constituencies. Although Massachusetts proposes an exceptions process that would enable patients and doctors to make a case for excluded drugs that may be most appropriate in individual cases, opponents say any process is likely to be onerous.

Neil Cronin, a senior policy advocate with the Massachusetts Law Reform Institute, a nonprofit legal services organization, which opposes the state’s proposal to maintain a closed formulary, said that low-income patients are less likely to challenge the state over drugs excluded from the Medicaid formulary.

And unlike those with means, Cronin said, Medicaid enrollees would be unlikely to purchase needed medicines out of their own pockets. “They just don’t have the economic liberty to buy out of formulary restrictions,” he said. “They are poor. They wouldn’t be on Medicaid if they weren’t.”