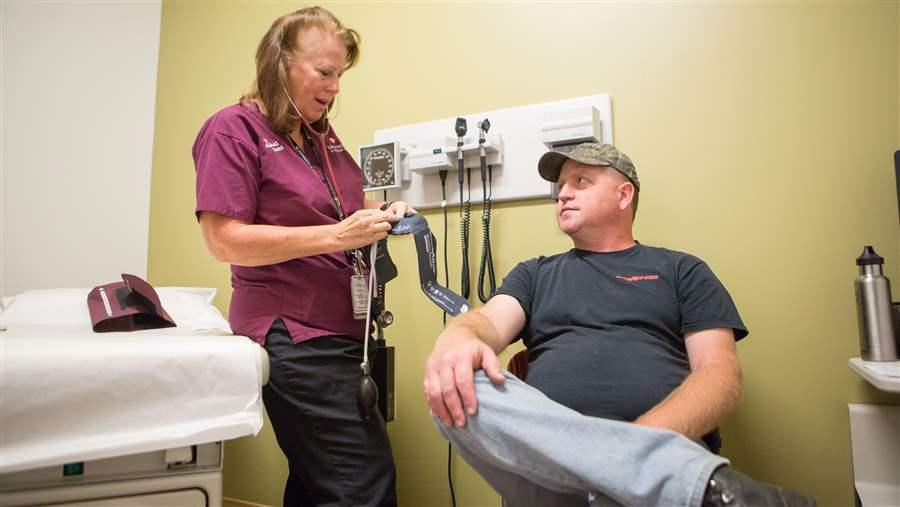 This story was a collaboration between Stateline and Politico.

Becky Peterson, the medical assistant who works with Lin, sits down with patients first and asks them about their symptoms and medical history — questions Lin used to ask. When Lin comes into the room, Peterson stays to take notes and cue up orders for tests and services such as physical therapy. When he leaves, she makes sure the patient understands his instructions.

The division of labor lets Lin stay focused on listening to patients and solving problems. “Now I’m just left with the assessment and the plan — the medical decisions — which is really my job,” Lin said in a quiet moment after seeing a patient at the Denver clinic where he works.

These days, many Americans who visit the doctor’s office often sit down with a physician assistant or nurse practitioner instead of their family physician. Or they’ll spend a large part of their visit talking to assistants like Peterson, who take care of a growing number of tasks doctors used to handle.

Doctors increasingly oversee care plans that are executed by a team, from nurses who sit down with patients to discuss diet and exercise to clinical pharmacists who monitor a patient’s medication.

Lin’s clinic has roughly twice as many medical assistants today as it had a year ago, plus a social worker and nurse manager. The configuration has cut the amount of time patients spend talking to their doctor and allowed doctors to see more patients each day. The extra visits bring in enough money to cover the cost of adding more employees.

“The reason a lot of this happened is physician burnout was significant, especially in primary care,” said Dr. Carmen Lewis, the medical director of the clinic.

The evolution of the doctor’s role comes as insurers — including state Medicaid programs — put hospital systems, doctors’ offices and providers under pressure to provide better care at a lower cost. And it’s expected to accelerate in the coming decades, as the patient population grows older. Many older patients suffer from chronic diseases that need monitoring but not necessarily the expensive attention of a physician at every visit.

This isn’t the job many physicians trained for — or that some want. Even doctors who support team-based care have trouble adjusting to the new workflow. Others, sick of the industry pressures, are opting out and setting up independent practices that don’t accept health insurance.

But most doctors will have to adapt, said Randall Wilson, an associate research director for Jobs for the Future, a nonprofit that advocates for increasing job skills. “People see the writing on the wall.”

Americans spend more on health care than people in other wealthy nations. Yet Americans live shorter lives and are more likely to be obese or hospitalized for chronic conditions, such as asthma or diabetes.

One culprit, health experts say, is America’s fragmented health care system. Americans rely on a mix of specialists and settings for care, but those pieces of the health care system don’t necessarily communicate or coordinate with each other.

The fee-for-service payment system, which rewards hospitals, clinics and doctors for the volume of procedures they provide, is another contributor. Health insurers will pay for a patient to sit down with a doctor. What they sometimes don’t pay for are other services, such as a visit from a community health worker or a phone call with a nurse, which can prevent medical emergencies and save patients and insurers a lot of money on expensive treatments.

New payment models encourage health systems to deploy their workers more efficiently — while also avoiding unnecessary services and costly errors. For instance, Medicare will now issue some hospitals a single payment to cover everything that happens to a patient from the moment they enter a hospital for knee replacement surgery to three months after they go home to start recuperating.

Distributing work across team members can help keep costs down, relieve doctors of the busywork that jams up their day, and make everyone more productive.

Most state Medicaid systems are shifting to “managed care” models and paying organizations a set fee per patient per month to cover all the services they provide. In a 2016 survey of state Medicaid directors, nearly half of states said their top priority for the coming year was changing the way health care is delivered and payments are structured.

But many doctors aren’t comfortable with the idea that they don’t always need to be in charge.

Medical associations have pushed back against proposals to expand the medical decisions non-doctors are able to make on their own. Health professionals’ “scope of practice” is governed by laws that vary from state to state. “While some scope expansions may be appropriate, others definitely are not,” the American Medical Association says on its website.

In a statement, the association said it “encourages physician-led health care teams that utilize the unique knowledge and valuable contributions of all clinicians to enhance patient outcomes.” It noted that top hospital systems are using physician-led teams to improve patients’ health while reducing costs.

To be sure, doctors won’t be displaced anytime soon. But shifting tasks to other professionals may reduce the need to train so many of them.

According to a 2013 study by the nonpartisan Rand Corporation, there are about seven doctors per 10,000 patients under a standard primary care team model. But under models that include more nurse practitioners and physician assistants, just six doctors are needed. And in clinics run by highly trained nurses, the ratio drops to less than one doctor per 10,000 patients.

Hospital systems like UCHealth, the University of Colorado-affiliated system where Lin and Peterson work, are betting that the future of health care involves a mix of professionals sharing responsibility for patients. Doctors will still run the show, but they’ll have to give up some control.

That culture change makes many doctors uneasy at first. Doctors want to protect their one-on-one relationship with patients. They may not understand what their non-physician colleagues have been trained to do, or are legally able to do. And many worry that change will make them even busier, by forcing them to manage the lower-credentialed professionals around them.

Lin is the chief information officer for UCHealth. As an administrator, he’s always pushing for change — his latest project is a system that releases certain test results to patients the moment they become available. But as a practicing doctor, he also understands that change is hard.

Having Peterson in the examination room with him took some getting used to, he said. “Like many doctors, I have a fear of letting go of all the things I traditionally do.” That includes documenting a visit. “I’m getting over it, because I don’t want to be the only one here at 8 o’clock at night, typing.”

Matt Moles, a doctor who practices in the same clinic, said he also initially felt uncomfortable. Sharing the examination room went against his medical training, he said: “We’re trained to trust no one.”

It’s still possible for doctors to have jobs that resemble the Norman Rockwell era of long consultations, if they’re willing to opt out of the mainstream. A small but growing number are setting up or joining practices that, rather than taking health insurance, charge patients a monthly fee, typically around $75, for unlimited visits.

“I personally have the mentality of — leave me alone, I’ll take care of my patients,” said Dr. Cory Carroll, when reached by phone at his family care practice in Fort Collins, Colorado. He’s been a solo practitioner for most of his 25-year career.

Carroll has about 300 patients, a fraction of the patient load of a typical doctor in a big health care system. He sits with patients for over an hour if he has to. He visits them at home. He helps them connect with social services and community organizations. And he can focus on what he loves most: teaching patients to eat a healthier diet.

His practice is proof that it’s still possible for a family doctor to do it all. But he emphasizes that his experience is unusual. “I’m absolutely an outlier,” he said.

Less than a quarter of all internal medicine doctors in the United States have a solo practice, according to the American Medical Association’s latest survey. And although the model Carroll has embraced is growing, it serves a more affluent slice of the patient population than a major hospital system such as UCHealth.

The clinic where Lin and Peterson work, in Denver’s Lowry neighborhood, is still in the early stages of transforming its teams. The best place in Denver to watch a diverse set of health professionals work together is across town, at a facility run by Denver Health, the city’s public safety-net hospital system. The facility includes a primary care clinic, an urgent care center and a pharmacy.

“A lot of Denver Health patients are so complex,” said Dr. Benjamin Feijoo, looking up from his desk. Patients often have multiple health issues, too many to handle in a typical 20-minute visit. “It’s a bit of a crunch,” he said.

So Feijoo turns to his colleagues for help. If a patient has both a medical and a mental health issue, Feijoo can address the medical problem and then ask a mental health specialist to step into the examination room. And if a living situation is compromising a patient’s health, such as unstable housing, or insufficient access to healthy food, the clinic’s social worker will try to find a solution.

The clinic also employs two community health workers, who spread the word about Denver Health in low-income neighborhoods, and a patient navigator, who calls the clinic’s patients when they leave a Denver Health hospital and helps them schedule follow-up appointments with their primary care provider.

Denver Health began expanding its care teams in 2012, when it received a $20 million federal grant. The system spent about half the money on hiring staff such as social workers, patient navigators and clinical pharmacists. The rest was spent on software that identifies patients who are spending avoidable time in the hospital, including people who are homeless or have a serious but treatable condition, such as HIV. New, smaller clinics wrap even more services around those patients, allowing them to come in for visits that can last several hours.

The new system now saves Denver Health, an integrated system, which includes a health plan, so much money on hospital stays and emergency room visits that it covers the salaries of the additional hires, said Tracy Johnson, the director of health reform initiatives for the system.

Patients across the UCHealth system don’t seem to mind the change. A few will ask to speak with their doctor in private, but others are more open with the medical assistant than with their doctor. “Sometimes, they don’t feel as judged,” Peterson said.

Lin said that since he’s started working with Peterson, his patients have been better able to keep their blood pressure and diabetes under control. “Patients will forget to tell me that they’re out of prescriptions,” he said — or he’ll be so busy tackling a more immediate problem that he’ll forget to ask.

With a medical assistant methodically asking all the opening questions, crucial details such as prescription renewals no longer slip through the cracks.