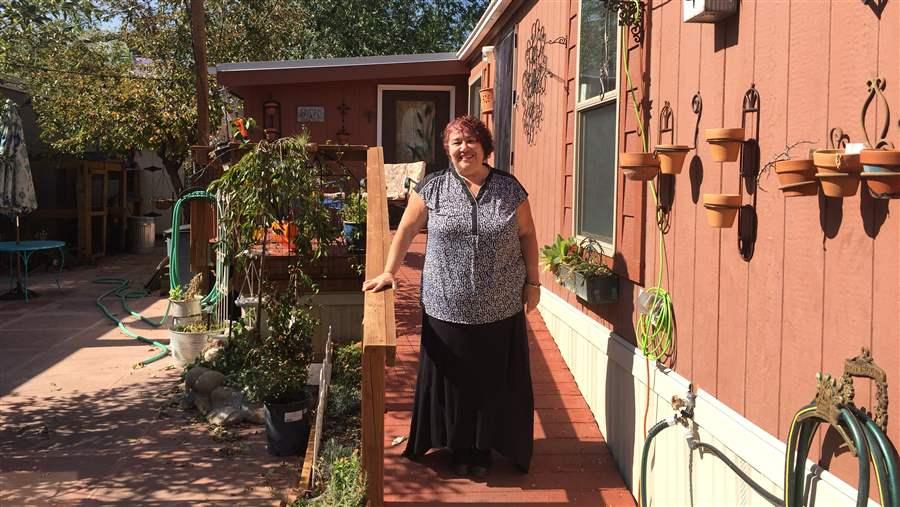 Isabel Sanchez lives in a trailer park in Boulder, Colorado. Around the country cities like Boulder have turned to trailer parks to provide affordable housing to its low- and middle-income population.

Editor's Note: This story has been updated to clarify that ROC USA, a national nonprofit, has sponsored some 200 resident-owned mobile home parks. It was additionally updated to correct the name of the Aspen Pitkin County Housing Authority and the portion of the housing program's funding that comes from a tax on real estate transfers.

BOULDER, Colo. — Here in the heart of one of Colorado’s most expensive cities, Isabel Sanchez bought a mobile home seven years ago for just $6,000. Her four-bedroom bungalow now sits on a lot she rents for $355 a month.

The mobile home park Sanchez and her family live in offers a glimpse of Boulder’s hippie past. Small houses and trailers, many dating to the 1960s and ’70s, sit close together on tree-lined streets. “I love the space, I love the location, I love the community here,” Sanchez, 55, said recently, relaxing in a blue armchair in her spotless living room.

Affordable neighborhoods like these have become hard to find in Boulder and cities across the country where home prices are soaring. In some metro areas, rising prices are prompting park owners to sell their land to developers, affordable housing advocates say. “When the mortgage crisis came about it sort of slowed down, and now it’s heating up again,” said Carolyn Carter, deputy director of the National Consumer Law Center.

So Boulder and a handful of other localities, desperate to hang on to homes middle- and working-class people can afford, have stepped in to buy parks, fix them up, and transfer ownership to residents or to a nonprofit on condition that rents be kept low.

Portland, Oregon’s housing authority financed a deal last year that saved a mobile home park from being sold to a developer. Pitkin County, Colorado, is buying a park it intends to set aside for people who work in the area. And Boulder bought a park this summer, with the twin goals of improving its infrastructure and maintaining affordable housing.

Affordable housing advocates say that the best way to preserve mobile home parks is to turn them into co-operatives owned by residents. But in Boulder, land is so valuable — and parks need so many infrastructure upgrades — that it wouldn’t be possible for low-income residents to finance the purchase alone.

About 20 million Americans live in manufactured homes — so called because they’re built in a factory, rather than on site — and about two-fifths of those can be found in mobile home parks, mostly in suburbs and exurbs.

Mobile homes are an important source of low-income housing. But homeownership can be precarious for people who live in mobile home parks. Because they don’t own the land beneath their houses or trailers, they have to move if the park closes down.

And many mobile homes aren’t all that mobile. Sanchez, who works at a nonprofit in Denver, says she could probably move her house if she had to because it was built recently. Her daughter’s house across the street may be a different story. It has sat there for over 40 years, like most of the homes in the park.

Even if a home can be safely moved, its owner may not be able to find an open lot nearby or be able to afford relocation costs, which can run from $5,000 to $10,000, according to Prosperity Now, a Washington, D.C., nonprofit that studies and advocates for policies that help low-income people become more financially secure.

The closure of a mobile home park can create a crisis for residents and for the city or town they live in as dozens of displaced people scramble to find new housing, says Esther Sullivan, a sociologist at the University of Colorado Denver who has studied mobile home parks in Texas and Florida. In her research, she found that city council members who agree to rezone a park often argue that park residents can move into low-income housing elsewhere. But that’s not always the case, she said.

The Manufactured Housing Institute, an industry group, said it doesn’t appear that parks are closing down more often today than in the past. But in many parts of the country, affordable housing advocates say market conditions make it tempting for park owners to sell to a developer.

Kevin Walker of Northcountry Cooperative Foundation, a Minneapolis nonprofit, says two dynamics are at play in the Twin Cities area. Many parks built in the mid-20th century are falling into disrepair and reaching the end of their useful life. Some owners have deferred maintenance for years on the privately owned roads, sewer and water systems that service their parks, he said. And land prices are rising.

States and Cities Step In

One way to preserve mobile home parks is to give the people who live in them a chance to buy the park themselves at a fair market rate, says Carter of the National Consumer Law Center. A national nonprofit called ROC USA will, with the permission of the park owner, help residents form a co-operative and finance a purchase. ROC USA has sponsored some 200 resident-owned communities in the United States.

Such laws are more common in the Northeast than in the South and West, which tend to have a strong tradition of protecting landowners’ property rights, says Doug Ryan, director of affordable homeownership for Prosperity Now.

Colorado state Sen. John Kefalas, a Democrat, has been trying to pass a law that would make it easier for residents of the state’s mobile home parks to purchase their communities. His latest iteration, which was defeated in committee this year, would have created tax credits to reward owners who sold to residents.

The manufactured home industry opposed the bill, describing it as intrusive and unnecessary. Kefalas says he plans to try again next year. For now, it’s technically possible for Colorado mobile home residents to band together to buy the park they live in, he said. It’s just never happened.

Colorado cities are asking what they can do, at the local level, to preserve their mobile home parks and keep them affordable. Boulder’s efforts date to the 1980s, when the city created zoning districts for its four mobile home parks. Boulder County did the same for the four parks adjacent to the city. If owners of the parks want to redevelop them they have to go through the public rezoning process.

Boulder city leaders support letting residents organize to buy the parks they live in but have concluded that such purchases would require at least some city funding.

Pitkin County, Colorado, has preserved four mobile home parks since the 1980s and designated them as housing for local workers, said Patti Clapper, vice chair of the county commission.

Pitkin’s strategy has been to subdivide the parks, sell the lots to the people living there, and impose deed restrictions to keep them affordable. The efforts to preserve mobile home parks are part of the Aspen Pitkin County Housing Authority’s employee housing program, Clapper said, which is funded in part by a tax on real estate transfers in Aspen.

But that strategy, while it protects residents from eviction, hasn’t always kept prices down. Clapper herself lives in a former mobile home park the city bought and subdivided in 1982. The county hasn’t limited how much the properties can appreciate, or limited the income of people eligible to live there. The neighborhood now boasts some expensive — even million-dollar — properties.

The Mapleton Mobile Home Park, where Sanchez lives, was bought by the city in the 1990s and then sold to a nonprofit. The city requires rents to be held to a level residents can afford. Rents are higher and rising in other city parks, according to Mary Duvall, CEO of Thistle, the nonprofit that owns the Mapleton Park.

Sanchez says she’s been encouraging her friends and family to move to Mapleton. Two of her eight children own property in the park, and her niece lives down the road. “Everyone jokes that I’m beginning the Sanchez compound!”