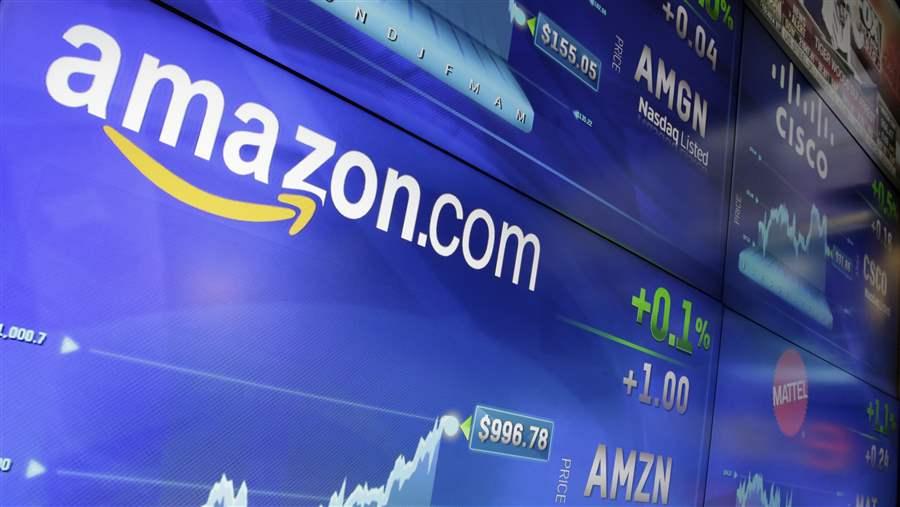 The Amazon logo is displayed at the Nasdaq MarketSite in New York. Amazon is seeking a site for a second headquarters, and many cities and states hope to attract it.

Given its history, perhaps New York should be wary.

A decade ago, New York state granted aluminum producer Alcoa a 30-year discounted electricity deal worth an estimated $5.6 billion. In exchange, the company promised to retain 900 existing jobs in Massena, near the Canadian border, for three decades. By 2014, the jobs were down to 750.

That’s when Alcoa came back for more, saying that without state help it would have to lay off 487 workers. New York responded with another $73 million in power subsidies. Under the latest deal, the company will have to pay a $40 million penalty if the number of jobs slips below 600, and the state subsidies will decrease if the price of aluminum rebounds.

The $5.6 billion Alcoa deal ranks as the second largest subsidy package a company has ever received in the United States, according to Good Jobs First, a nonprofit that has studied such deals over the past four decades. In total dollars, New York state (and cities in the state) offered more in incentives than any other state since 1976, often in large packages to single companies.

New York’s past incentives, many designed to revive the flagging fortunes of its upstate region, have had limited success. And yet Buffalo, Rochester, Albany, and even New York City are among the more than a hundred cities and states bidding to be the site of Amazon’s $5 billion HQ2 project, which the Seattle-based internet giant says will employ 50,000 people. The deadline for submitting bids was Thursday.

The bidding war that Amazon has ignited, even among states such as New York that have been burned before, speaks to the tremendous scale of the Amazon project. It also reflects public officials’ desire to be perceived as doing everything they can to create jobs. Tom Kucharski, president and CEO of Invest Buffalo Niagara, a nonprofit that works to attract business, said his area is undaunted by the Alcoa experience and others like it. He said his area has “strict enforcement of employment goals and investment” in any incentive packages.

“The state is being aggressive in incentives,” Kucharski said. “What’s reported on are the ones that fall short; there are a lot of employers who got incentives who succeeded. You’ve got to be in it to play.”

To win the contest, city and state officials from around the United States, and Canada, are offering Amazon low taxes, cheap land and new infrastructure. Stonecrest, Georgia, has even offered to cede some of its land to the company and create a new city named Amazon.

“There are major political benefits to presiding over a ribbon-cutting ceremony and a press conference to announce you have created or saved all these jobs,” said Timothy Bartik, senior economist at the W.E. Upjohn Institute for Employment Research in Kalamazoo, Michigan. “The political problem with long-term incentives is that the mayor or governor is financing their political ribbon-cutting opportunity by reducing the tax base of the next mayor or governor.” 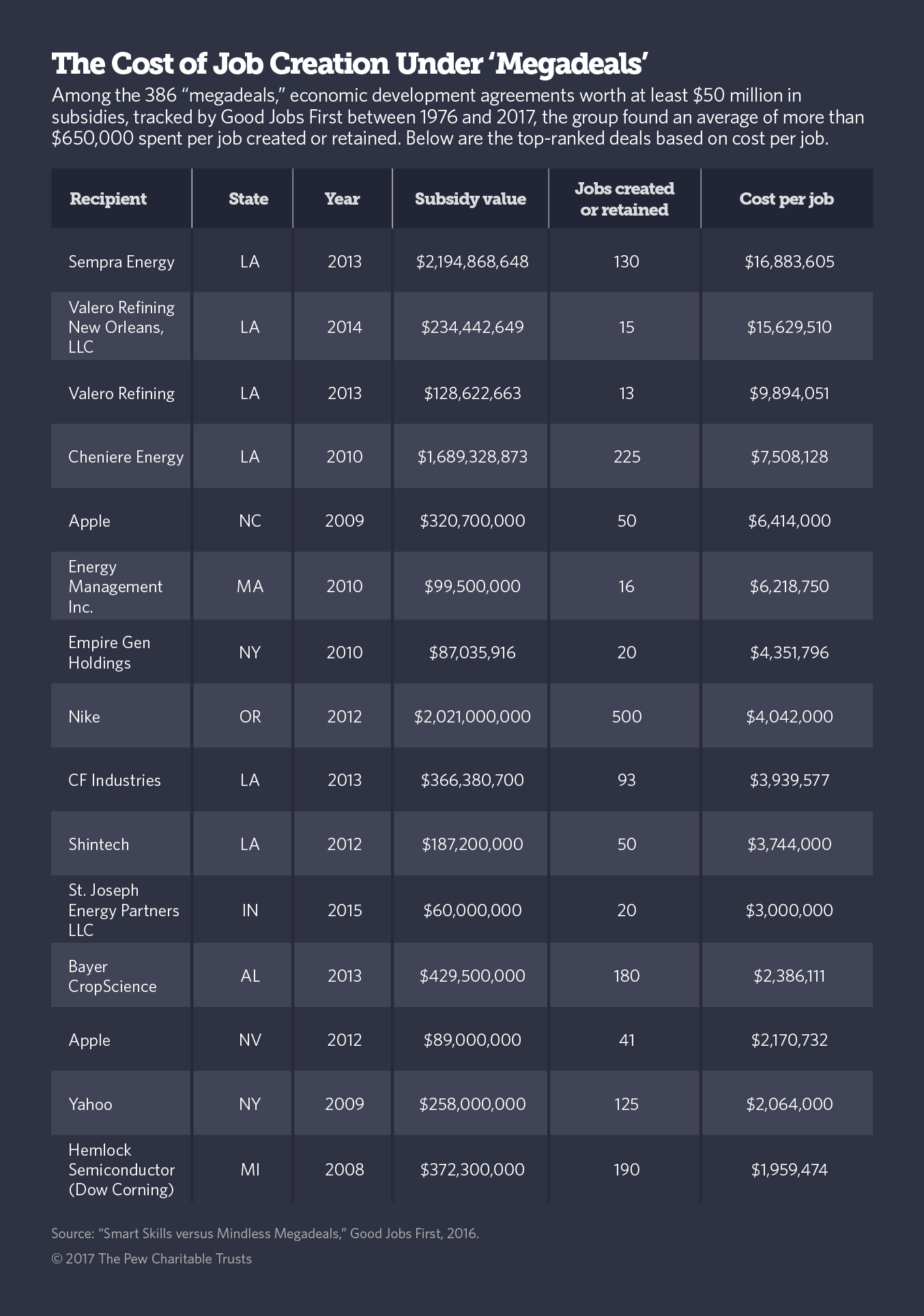 'A Summary of Total Incentives'

According to Amazon’s request for proposals, it wants to place its second headquarters near a “significant” population center, at a site close to a major highway and an airport with daily direct flights to Seattle, New York, San Francisco and Washington, D.C. It would prefer a diverse city with good schools, first-rate universities and an educated labor pool, abundant recreational opportunities and “an overall high quality of life.”

Amazon also says it is looking for a “stable and business-friendly environment and tax structure” — including incentives to offset its initial capital outlay and ongoing operational costs. It goes on to suggest some possible sweeteners: free land and site preparation, tax credits, relocation grants, workforce grants, utility incentives and fee reductions. “The initial cost and ongoing cost of doing business are critical decision drivers,” the request states.

The company boasts that its current headquarters has been a catalyst for development in downtown Seattle, and estimates that its investments in the city between 2010 and 2016 added an additional $38 billion to the city’s economy.

Seattle has become Amazon’s town. The company now employs about 40,000 workers in the city, its largest employer, according to The Seattle Times. It has as much office space as the city’s next 40 biggest employers. The benefits of having Amazon’s headquarters there prompted the city council to write a letter this week urging the giant company to reconsider locating its second headquarters elsewhere.

“We want you to stay with us and grow with us,” the letter said.

But Good Jobs First says that in trying to lure and retain employers, many cities and states give away more than they get back.

The group’s analysis of 386 deals worth at least $50 million since 1976 found that the average cost per job created was $658,427 — far more than cities and states could expect to get back from income taxes, sales taxes, property taxes or other revenue.

“At such an astronomical cost level, taxpayer risks are not simply elevated — taxpayer losses are guaranteed,” the report concluded. Bartik of the W.E. Upjohn Institute for Employment Research, who wrote a recent paper on tax incentives (Bartik’s work was funded in part by The Pew Charitable Trusts, which also funds Stateline), agreed that lot of the incentive packages “wouldn’t pass the benefit-cost test.”

“The positive aspect is you are creating jobs, so to the extent you drive up the employment population ratio, you’re adding to earnings and put upward pressure on salaries,” Bartik said. “The negative aspect is that these incentives aren’t free. There’s no fairy godmother paying for them. The budget costs of the incentives exceed the fiscal benefit.”

In recent years, some states have taken steps to rein in the incentives they offer — but even they have been unable to resist the lure of Amazon HQ2.

Louisiana, for example, provided six of the 15 most expensive subsidy deals in terms of cost per job, according to the Good Jobs First study. Until 2016, Louisiana officials could offer incentives to companies without including performance standards or job growth targets. Property tax and other abatements were costing local governments (which have no say over the deals) more than $7 billion over five years.

Last year, Democratic Gov. John Bel Edwards issued an executive order with new requirements governing incentives for manufacturing plants. Now tax abatement deals have to include job creation goals, and companies generally can’t get them for adding new equipment — they have to create new manufacturing plants. Local governments also must sign off on the deal.

Nevertheless, New Orleans is expected to make a bid for Amazon HQ2. Because the governor’s executive order applies only to manufacturing plants, “it wouldn’t have a bearing at all on Amazon headquarters,” said Gary Perilloux, spokesman for the Louisiana Economic Development agency.

Don Pierson, secretary of Louisiana Economic Development, said the state “likes to compete. A strong incentive package helps us do that.”

Pierson noted that one possible incentive the state might offer Amazon is a 6 percent rebate on some payroll expenses — but he emphasized that Amazon would have to meet job creation milestones to get it. “I guess we see this in sports all the time,” he said. “A player gets a contract which gives a bonus if he makes the playoffs and other qualifiers.”

In the Good Jobs First study, Michigan had 34 “megadeals” (deals worth $50 million or more), the most of any state, followed by New York with 33. Michigan’s Republican Gov. Rick Snyder abolished the state’s main credit program, the Michigan Economic Growth Credit, in 2011, arguing that it was too expensive.

Snyder and the Legislature replaced that old credit system with a lower corporate income tax, with no broad-based credits, and required each proposal for a tax abatement to be evaluated individually and to be funded by an individual state grant, according to David Zin, chief economist for the Michigan Senate Fiscal Agency.

In July, Snyder also signed a package of bills that included possible rebates of the state income tax paid by employees as an incentive if prospective employers meet certain criteria.

Spokeswoman Anna Heaton said Snyder still believes in credits as “one tool that can be used responsibly to diversify the state’s economy and draw new investment.” The lower business taxes will be a help too, she said.