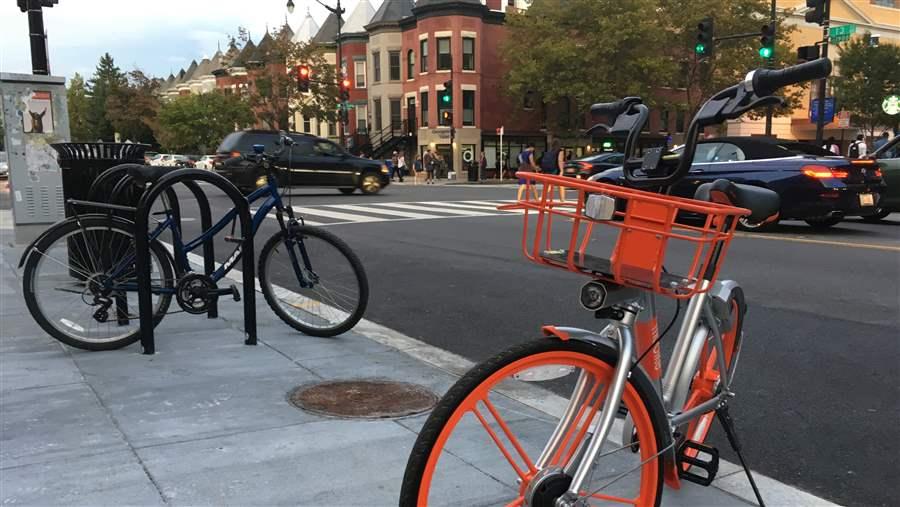 A dockless bike is left near a busy intersection on U Street in Washington, D.C. The city, which has its own bike-share program, has welcomed dockless bikes.

Editor's Note: This story has been updated to correct details of San Francisco’s bike-share contract and to clarify plans for the original bike-share program in the Twin Cities.

As bike-share’s growing popularity in the United States spurs private investment, cities that have considered starting their own municipal programs are beginning to ask: Why bother trying to round up millions of dollars when a private company will come in and do it for free?

Following success in China, private firms in the last few months have deployed masses of brightly colored bikes ready to zip around American cities, pushing their way into a market that until now has been dominated by city-subsidized programs.

Unlike existing publicly financed bike-share programs, with bikes that are docked at stations, the neon green, orange and yellow bikes from competing companies are dockless — picked up and dropped off wherever a user likes. Riders use an app on their phone to find available bikes and unlock them for about $1 a half-hour, a cheaper walk-up price than most existing programs offer.

The entrance of dockless biking into the U.S. market has rocked a bike-share sector that has long relied on city workers’ help to assemble federal grants, city funds and advertising and sponsorships in order to lure bike-share operators. But those endeavors may be nearing an end.

In Dallas, city officials had long talked of establishing a bike-share program, estimating last year that $6 million would need to be raised to cover the costs of a starter system with 400 bikes and keep it running for five years.

“With such high upfront costs, the decision was made that money needed to be spent elsewhere,” said Jared White, who manages the city’s alternative transportation program.

Now the city has three private bike-share companies within its limits, making it one of the first American cities to offer only dockless bike sharing.

“It’s kind of ironic,” White said. “Dallas didn’t always have the best reputation for cycling, and we were one of last big cities to try and get bike-share, and now it seems we’ve leapfrogged ahead of everyone else.”

Private bike-share companies, which have pursued operating both in cities with existing publicly backed bike-share programs and those without, are eager to step in and supply what cities can’t or won’t spend money on.

“What’s so attractive about our system is it doesn’t require taxpayer funds or city funds,” said Derrick Ko, a founder of bike-share company Spin and a former project manager at ride-hailing company Lyft. “I like to tell cities to spend that money on infrastructure or bike safety instead.”

In the Twin Cities, the nonprofit that runs the area’s docked bike-share program, Nice Ride, has decided to transition its operations to a private dockless company over the next few years rather than try to replace its fleet with a dockless system or directly compete with the private dockless companies that have expressed interest in operating in the city.

Established in 2010, Nice Ride is one of the oldest bike-share programs in the country, and Bill Dossett, the nonprofit’s executive director, said much of the system’s equipment likely would need to be replaced in a few years. Now the two systems will operate in tandem until the docked bikes are phased out.

“Our expectation is that the public sector is unlikely to continue to fund what the private sector wants to run,” Dossett said. “You need to align the business model with where the industry is going.”

Other cities, however, have been more skeptical. Public entities have poured millions into existing bike-share programs and proven what was once a dubious claim: that bike sharing would work in America, whose cities generally lack the biking infrastructure and culture seen in Europe and Asia.

Even so, bike sharing has not been a money-making venture for many cities, and many bike-share experts have doubts about the financial viability of the private companies.

San Francisco and Austin each initially shut down private bike-share companies that were rolling out on their streets, citing concerns over managing the public right of way. Both have since changed course: Austin began permitting the bikes in March, and San Francisco allowed dockless bikes in July.

But in San Francisco, allowing private bike-share companies to come in may run afoul of the contract signed between government entities and Motivate, the company they hired to manage the day-to-day operations for the city’s Ford GoBike bike-share through 2025. The contract gave Motivate exclusive rights to operate a bike-share program within the city for 10 years, and the parties have now entered into dispute resolution process.

“Absolutely there’s this tension,” said Nicole Freedman, director of transportation in Newton, Massachusetts, which, along with other suburbs of Boston, has asked private bike-share companies to submit proposals to serve the suburbs just outside the reach of the city’s Hubway bike-share program.

“If you introduce another bike-share system, you will take some customers from the existing one,” she said. “You hope to increase the size of the whole pie instead of fighting over one sliver.”

That appears to be the approach that private dockless companies are taking. Many have marketed themselves as complementary to existing bike-share programs, able to quickly increase the number of bikes on the ground and more easily float into neighborhoods where docked programs don’t have a large presence.

“[Cities] know more people would be biking if they had a publicly available bike. They’ve wanted to put more stations in, and that costs more money to the city,” said Jillian Irvin, head of U.S. government affairs for Mobike, a Chinese company that recently launched in Washington, D.C. “I’ve not yet encountered a city that says, ‘We have enough bikes. No more bikes for us!’ ”

In September, transportation officials in Washington allowed private companies to come in for a six-month pilot program. Kim Lucas with Capital Bikeshare, the city’s municipal bike-share program, said the main goal is to increase the number of people on bikes. The city still intends to go through with a planned expansion of its existing bike-share program through 2018 and estimates it will cost more than $6 million a year to continue operating.

“The public sector paved the way for bike-share and educated riders on ridability, and the private sector is benefiting from it,” Lucas said. “But we hope this will increase bike-share in the district overall and that the two systems can work together harmoniously.” 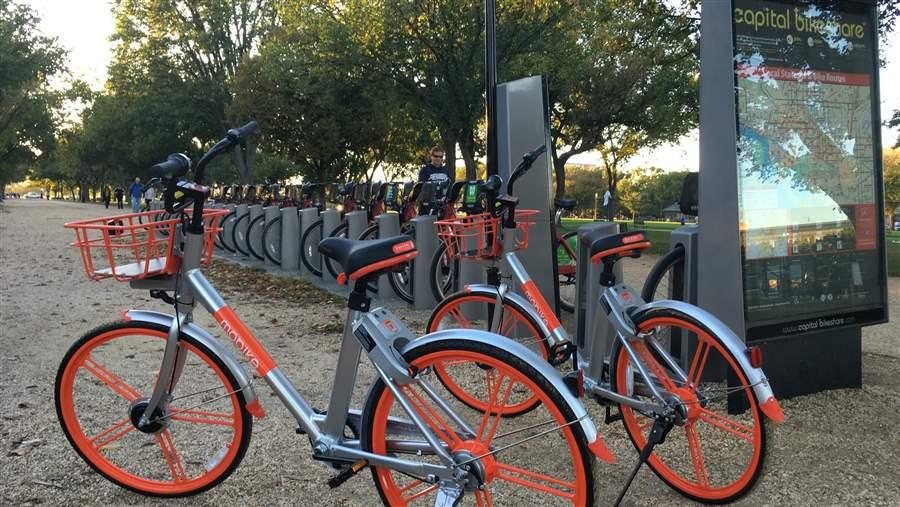 “There’s a fair degree of performance art from people, of ‘where’s the funniest or most interesting place to leave a bike?’ ” said Scott Kubly, director of the Seattle Department of Transportation.

But perhaps the biggest concern is the financial viability of the companies, which so far are largely relying on venture capital to finance their operations. By this summer, several bike-share companies across the world had amassed a total of more than $1 billion in funding.

Many bike-share experts say they’re skeptical that private companies can survive on $1 for a ride that cities charge $2 or $3 for, meaning they would need many more rides per bike to be profitable.

“Because the city has no financial commitment to the provider, if things change and they’re not going to be as successful as the operator was hoping, it’s not like the city’s really on the hook financially,” Paradies said.

Some cities have more to lose, particularly if private bike-share companies chip away at existing government-run programs or cause them to close down completely.

“The last thing you’d want is to scrap an existing system that people found extremely useful and two years later have a dockless bike-share company say ‘we can’t operate in this market’ and pull out, and then the city has nothing,” Kubly said.

Dossett said that’s a concern in Minneapolis, and that the transition period is designed to make sure entrepreneurs stick around. As someone who’s spent a career promoting bike riding, he says he has mixed feelings about a market that has grown large enough to attract outside interest.

“It’s a complicated time, and all of us have this feeling like this nonprofit model has been really awesome, and we’re really proud of it,” he said. “But we’ve arrived at another moment that we really wanted, where the private sector wants to spend billions of dollars to put people on bicycles, and I want to see that moment too.”