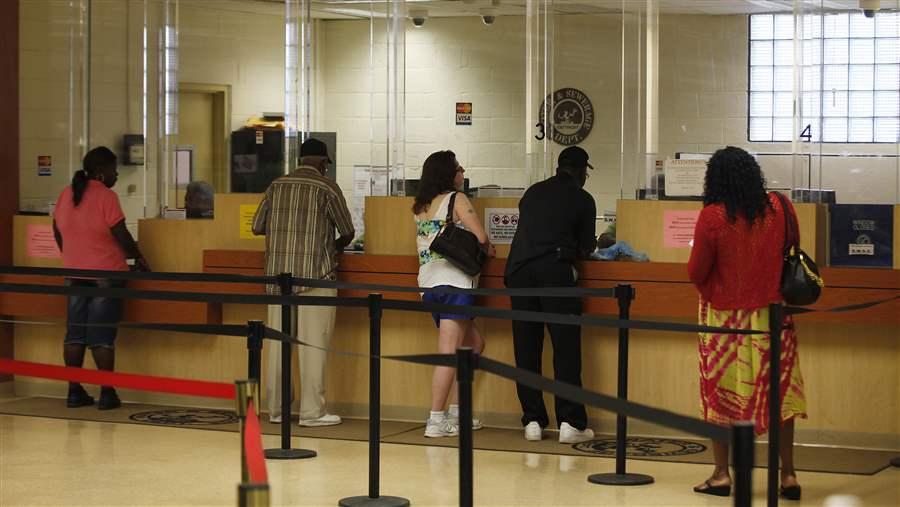 Detroit Water and Sewerage Department customers paying their water bill. Detroit and many small cities in the South require anyone who wants to open a public utility account to provide a Social Security number, government-issued ID or some form of proof they are in the country legally.

In the city of LaGrange, Georgia, an immigrant from Mexico lives with his young family. He’s been living there for 10 years. He’s a homeowner. He doesn’t have a green card, so he doesn’t have a Social Security number.

Without the Social Security number, the homeowner can’t get utility services in his name, even though he has a Mexican passport and an individual taxpayer identification number from the Internal Revenue Service. (To protect him, his lawyer does not want to disclose his immigration status.) The city, which is the sole provider of utilities, requires that anyone opening an account have two things: a Social Security number and a government-issued photo ID.

So the immigrant relies on a friend, who opens an account for the man in his own name. In doing so, both men risk being prosecuted for fraud.

Dozens of cities and counties around the country require anyone who wants to open a public utility account — lights, gas, water, phone — to provide a Social Security number, government-issued ID or some form of proof they are in the country legally.

For some immigrants this is all but impossible, even if they are in the country legally, leaving them with few options, immigration rights advocates say. They can ask the landlord to open the utility account in the landlord’s name, but that can severely limit their housing options. Like the homeowner in LaGrange, they can ask a friend or relative with a Social Security number to open the account and risk prosecution. Or they can move to another city.

It’s hard to know exactly how many cities have adopted these policies. A Stateline review of more than two dozen city utilities found the municipalities that do require a Social Security number to open an account have several things in common: They’re smaller cities that usually provide all or some of their municipality’s utilities, and they are primarily located in the South, Arizona and Texas — although at least one urban, Northern city, Detroit, requires a Social Security number and government-issued ID to open a water account.

In May, the Georgia NAACP, the National Immigration Law Center, Project South, and other advocacy groups, filed a class action lawsuit against LaGrange alleging that by restricting access to utilities, the city’s policies make it “difficult or impossible for some of the City’s most economically disadvantaged residents to live in LaGrange,” disproportionately harming Latinos and African-Americans. LaGrange also attaches unpaid court fines to residents’ utility accounts, a practice that is also part of the class action suit. (The immigrant who cannot get utilities in his name is a plaintiff in the suit, identified as “John Doe#3.”)

In its motion for dismissal of the case, the city said that it did not intend for its policies to have a discriminatory effect and that the mayor and city council adopted “rational and reasonable requirements” intended to “protect the city coffers.”

Anyone opening a water account in Augusta, Georgia, needs to provide both picture ID and proof of Social Security number. In Alabama, the city of Dothan requires a state ID to open a utility account — and to get that identification, a resident must prove he or she is in the country legally and has a Social Security number.

Housing and immigration lawyers say these requirements discriminate against immigrants and violate both the federal Fair Housing Act and the Privacy Act of 1974, depriving immigrants of their human rights. In court records, city officials argue they’re just trying to prevent fraud.

“This has huge implications,” said Atteeyah Hollie, staff attorney for the Southern Center for Human Rights, an Atlanta-based organization that provides legal representation to poor people accused of crimes, and is one of the groups suing the city of LaGrange. “They’re making it impossible for [immigrants] to have basic services so they can live there. The effect is to tell certain immigrants, ‘You can’t live here.’ ”

The LaGrange policies don’t discriminate against immigrants, according to Andrew Arthur, a resident fellow in law and policy for the Center for Immigration Studies, a research and advocacy group for limiting immigration.

“The policies are facially neutral and legitimate because of the interest in the municipality of obtaining payment for the services that it provides,” Arthur said.

LaGrange Mayor Jim Thornton declined to comment, citing the ongoing litigation. The city’s attorney, Jeff Todd, said city officials felt strongly that the Social Security requirement was an important tool to prevent fraud and had nothing to do with a resident’s immigration status.

“The plaintiffs legitimately despise the policy choices. They’re attempting to make a novel stretch under the Fair Housing Act to make a policy change,” Todd said. “We look forward to demonstrating to the court that the policies are even-handed ordinances.”

An October report by the Emory International Law Review found that in some households in the United States, residents face the risk of living without electricity or running water because of their immigration status. (One of the report’s authors, Azadeh Shahshahani, is the legal and advocacy director for Project South, one of the LaGrange plaintiffs.)

The American Public Power Association, an Arlington, Virginia-based trade group that represents nonprofit, community-owned utilities around the country, including in LaGrange, declined to comment for this story. Twinkle Andress Cavanaugh, president of the Alabama Public Service Commission, which regulates utility companies in the state, also declined to comment. Other utility groups did not respond to requests for comment.

Justin Cox, an Atlanta attorney with the National Immigration Law Center, who is also part of the LaGrange lawsuit, said he’s represented a number of clients in roughly a dozen Southern cities in Alabama, Georgia, South Carolina and Tennessee who couldn’t get utilities because they didn’t have a Social Security number. He said that every time he called the city and told them they were breaking the law with this requirement, “they always cave.”

“I was playing Whack-A-Mole,” Cox said. “Our hope is with this case, we can send a message to other utility providers, ‘if they don’t change their policy, they’ll be next.’ ”

In 2011, then-Alabama Gov. Robert Bentley, a Republican, signed a sweeping immigration law believed to be the toughest in the nation.

Many municipal utilities weren’t clear whether they could cut off services to residents who couldn’t prove they were in the country legally, said Grace Meng, an immigration attorney and senior researcher with the nonprofit Human Rights Watch. In 2011, Meng wrote a report looking at the impact of the Alabama immigration law.

Her report found that the law encouraged local and state officials to deny immigrants without legal documentation access to water and housing. One woman in the report left Alabama shortly after the law was passed after her landlord announced that residents would need a Social Security number in order to get water and electricity.

Meng’s investigation also found that some public utilities, including in the cities of Dothan and Decatur, required either government-issued ID or a Social Security before the law passed, documentation that is all but impossible for many immigrants. (Both cities still have those requirements in place.)

Other municipalities appear to be unclear about what federal law requires.

In Calhoun, Georgia, for example, the public utility’s website says that in order to open an account, applicants are required by federal law to provide a Social Security number, citing the Federal Trade Commission’s “Red Flags Rule,” intended to prevent identity theft.

But when contacted by Stateline, Larry Vickery, the utility’s planning director, said that the city never had required a Social Security number and only requires two forms of identification, including a photo ID such as employee ID and accepts credit cards as documentation. He said he did not know what the Red Flags Rule was.

The Red Flags Rule, first implemented by the Federal Trade Commission in 2007 and amended in 2010, requires many businesses and organizations to implement a written identity theft program to detect the warning signs, or red flags, of possible fraud. But the rule only applies to businesses that defer payment for goods and services or extend credit. And they have to use credit reporting agencies to either obtain or report information.

But, said Tiffany George, senior attorney in the FTC’s Division of Privacy and Identity Protection, “the FTC does not have a requirement of collecting Social Security numbers.” She said she was not aware of communities that were confused about the rules and did not want to comment on specific cases.

When contacted again by Stateline, Vickery said that the city of Calhoun was revising its website to be clear that a Social Security number isn’t mandatory to open a utility account and that the city would accept other forms of identification, such as a passport — even a Mexican passport, he said.

He said Calhoun is an industrial city with a relatively large immigrant population. “We want to be accommodating,” Vickery said. “We weren’t aware that we were doing anything wrong.”