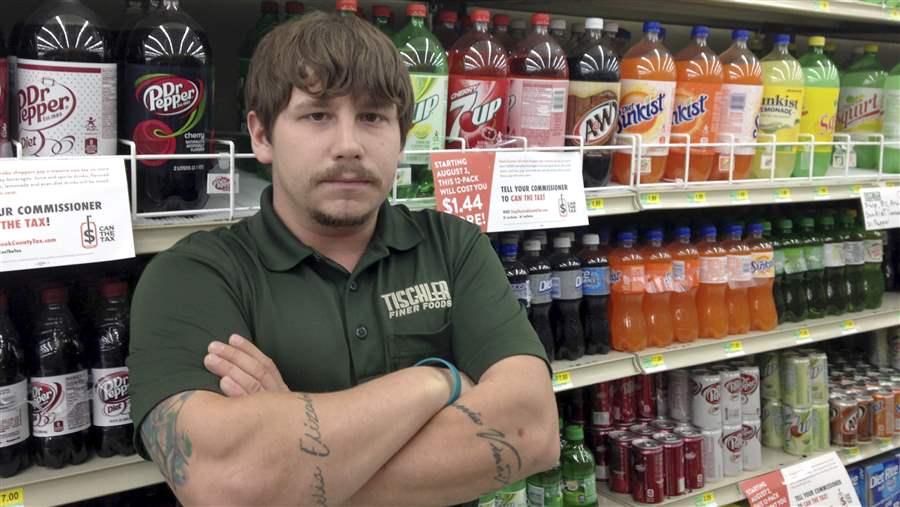 Matt Gill, manager of Tischler Finer Foods in Brookfield, Illinois, says the soda tax has cut into his business. The Cook County Board repealed the tax Wednesday.

The Cook County (Chicago) Board of Commissioners voted Wednesday to repeal the controversial penny-an-ounce tax on sweetened beverages, following a pitched advertising battle between advocates who cited public health concerns and opponents who said the tax was too burdensome on business.

The repeal, on a voice vote, was taken just two months after the tax went into effect Aug. 2. The repeal goes into effect Dec. 1. Cook County Board President Toni Preckwinkle, a supporter of the tax, said the county will now have to plug a $200 million annual hole in the budget – without the money the tax was expected to raise.

The American Beverage Association and local store owners pushed for repeal with millions of dollars in television advertising. They were countered by an equally expensive campaign by billionaire public health advocate and former New York Mayor Michael Bloomberg, who in 2012 pushed through a municipal soda tax on jumbo drinks only to have it overturned by a state court in 2014.

Chicago’s complicated tax on sweetened beverages covered any nonalcoholic beverage that was sweetened, whether artificially or with sugar, and whether it came in bottles and cans or from a fountain. The tax applied to regular and diet soda, sports and energy drinks, and juice products that weren’t 100 percent fruit or vegetable juice. It also applied to ready-to-drink sweetened coffees and teas — as long as they were less than half milk. It did not apply to flavored bubbly waters without sugar but did cover sparkling waters that were sweetened with sugar.