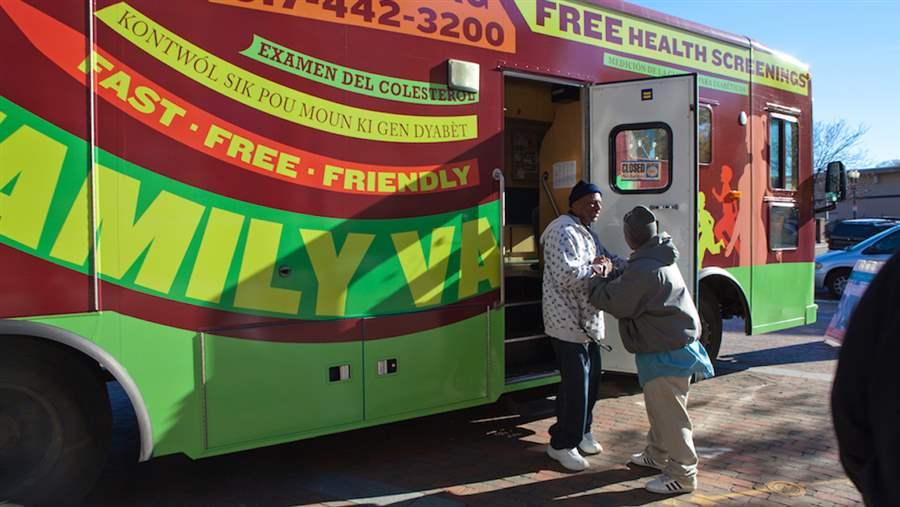 The Family Van makes a stop in Boston. Mobile health clinics are assuming a more prominent role in the U.S. health care system.

© Courtesy of the Family Van

One afternoon last month, the Family Van stopped at the corner of Washington and Roxbury streets in Boston. The regulars had already formed a line, waiting in the lingering summer heat for the red and green RV to arrive.

The Family Van, which is funded in part by Harvard Medical School, provides free blood pressure tests, HIV counseling and basic medical care to underserved neighborhoods across Boston. The van has been operating since 1992, and mobile health clinics like it have been around for decades, but they are assuming a more prominent role as the U.S. health care system places a greater emphasis on preventive care.

Encouraged by incentives in the Affordable Care Act, health care providers and insurers are trying to treat health care problems before they turn into costly health crises. Mobile clinics are an effective way to reach patients who may forgo preventive care because they can’t afford it or can’t get to a doctor’s office.

A primary goal is to avoid expensive emergency room visits. One 2012 study estimated that between 14 and 27 percent of ER visits could have been handled somewhere else, saving an estimated $4.4 billion annually. 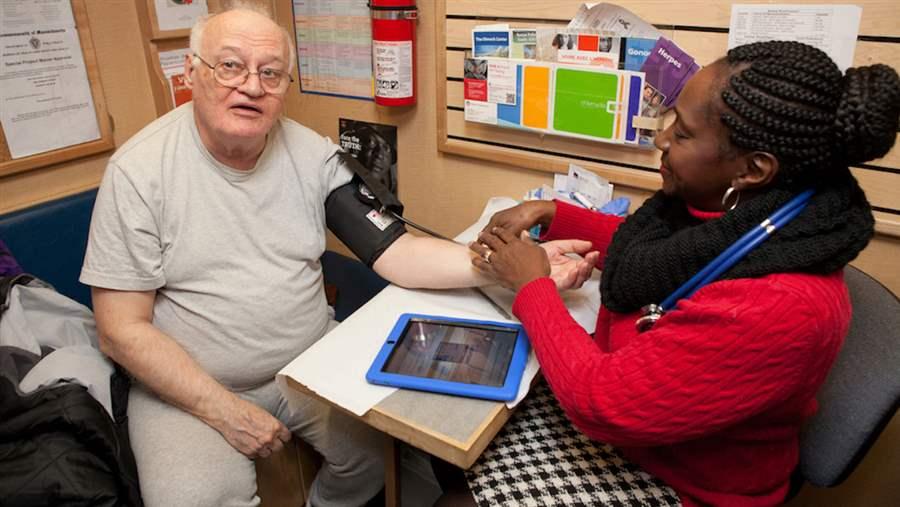 Rainelle Walker-White, assistant director of the Family Van in Boston, takes a patient’s blood pressure aboard the mobile health clinic.

© Courtesy of the Family Van

Dr. Anthony Vavasis, an internist at Mount Sinai Beth Israel in New York City who has studied the impact of mobile clinics, said they help health systems avoid the “million-dollar patient” — patients who make their first contact with the health care system when a serious condition develops and medical attention becomes urgent. The cost of treating related complications can skyrocket over time.

“If you build connections early on, then you can avoid having them come to the emergency room for complications later,” Vavasis said.

Studies have shown the success of mobile clinics in identifying and improving previously undiagnosed conditions. A 2014 study published in The American Journal of Managed Care found that Family Van patients who were diagnosed with high blood pressure had significantly lower blood pressure on follow-up visits. That led to fewer health crises, including a 32 percent reduction in the relative risk for heart attack and a 45 percent reduction in the relative risk of stroke.

A 2017 study by the Advisory Board Company, a health care consulting company, found that 12 percent of Family Van patients learned about a previously undiagnosed condition, such as diabetes or glaucoma, and a quarter were referred to follow-up services.

Mobile Care Chicago’s Asthma Van program, which delivers care to more than 6,000 underprivileged students in Chicago every year, has reported similar success in identifying asthma-related issues early on and diverting patients from the emergency room.

According to Matt Siemer, executive director of Mobile Care Chicago, more than 60 percent of the program’s patients had been using an ER as their primary treatment site for asthma before going to the Asthma Van. Of those who relied on the mobile clinic for their asthma care needs for a year or more, less than 5 percent ended up back in the ER.

Recently Mobile Care Chicago started working with hospitals and health plans to target ZIP codes where high concentrations of children cycle through the ER for asthma-related issues. Siemer estimates that the Asthma Van program produces at least $450,000 a year in savings through ER diversions alone.

A Lack of Trust

In addition to cost and transportation challenges, many people skip timely or regular care because they fear or distrust the health care system. By bringing medical care to vulnerable patients in a familiar setting, mobile clinics are able to chip away at these barriers.

“One of the most critical features of mobile health clinics, is their ability to build trust with the community and link clinical and community settings,” according to a 2015 article in The American Journal of Accountable Care.

Circle Health Services, a small health organization in Ohio, employs a mobile needle exchange to help combat the spread of HIV and other diseases. The exchange is staffed by clinicians as well as two nonclinical workers who are former addicts. The two nonclinical workers help build trust with addicts who rely on the mobile unit for clean needles and help convince them to use the mobile unit’s clinical services, such as HIV and hepatitis C screenings, flu vaccinations and health education.

With an 862-bed teaching hospital and 20 community clinics in the Dallas area, Parkland Health and Hospital System is much larger than Circle Health Services. But despite Parkland’s size and resources, many homeless people in the greater metropolitan region would not have access to care without the health system’s HOMES mobile health program.

“We use mobile clinics to go to locations where homeless people congregate,” said Dr. Susan Spalding, the medical director of the program.

In 2015, HOMES served 9,377 patients. Of those, more than three-quarters were uninsured. Reaching these vulnerable patients is one goal of the program. Helping to lift them out of their circumstances, which can significantly improve health outcomes, is another.

Despite the growing interest in mobile health clinics as a means to save money and reach underserved populations, obstacles remain.

For example, many health administrators suffer sticker shock from the costs of mobile health clinics. The estimated cost of starting a mobile clinic, which includes acquiring a vehicle, purchasing equipment and hiring staff, is about $300,000, according to the Advisory Board. The same study found that the average annual cost of operating a mobile clinic is about $450,000.

While several studies suggest that partnerships with hospitals are a boon for mobile clinics, Vavasis acknowledges that there still hasn’t been a large, multiyear study of their impact — and that gives pause to some health system leaders. He says an in-depth study that lays out the overall impact of mobile clinics on the health care system — and, more specifically, the potential savings and benefits for health systems — needs to be undertaken in order to win them over.

Without financial buy-in from health systems, even the most successful mobile clinics are left to scrape by.

“Without individual donors and private philanthropy,” Siemer said, “our patients would be back where they were, cycling through the ER.”

Some advocates also caution overstating — or overestimating — the role of mobile clinics in the overall health care system.

“Mobile clinics are a solution of last resort,” said Spalding of the HOMES program. Mobile clinics, she added, can address barriers to care, such as a lack of reliable transportation, but they are not a panacea for all the troubles that ail the health care system.

“Thoughtfully applied,” she said, “they are an important component of care for the most vulnerable populations in our country.”