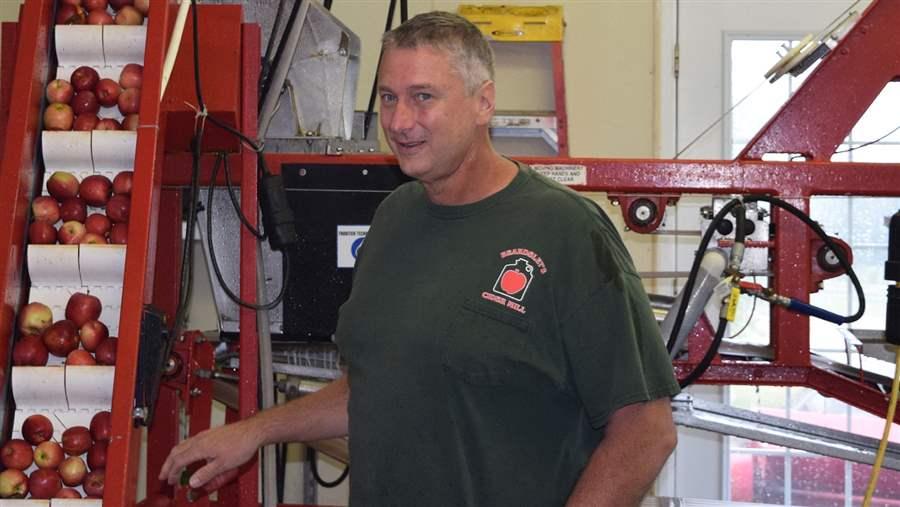 Dan Beardsley with a cider press at his apple farm in Shelton, Connecticut. He plans to distill apple brandy and whiskey under a new state law that makes it easier to start a farm distillery if it uses local ingredients.

SHELTON, Connecticut — Dan Beardsley’s great-grandfather made moonshine on the family farm to make ends meet during Prohibition. Now he can boost farm profits with a legal distillery, thanks to a new Connecticut law that took effect Oct. 1.

The law, based on a similar “farm to flask” law enacted in New York almost a decade ago, allows farmers to distill and sell spirits using their own produce without high-priced licenses or distribution requirements. They can sell their own product at a farm store, and hold tastings, without using a wholesaler if they use local ingredients.

Such farm distillery laws are helping rural areas get in on the craft distillery movement.

So far this year, a dozen states have enacted laws designed to help craft distilleries, and most benefit farm distillers either directly or indirectly, said Heather Morton, who tracks such laws for the National Conference of State Legislatures (NCSL). For instance, Indiana shortened the waiting period to start a small distillery from three years to 18 months, and Georgia allowed distillers to sell bottles at retail.

New York this year gave another boost to farm distillers by allowing them to serve cocktails.

Minnesota, North Dakota, Virginia and Washington also require some distillers to use local ingredients, and New Jersey offers a “New Jersey Distilled” label if most ingredients are local. Arizona and Georgia allow farmers to distill if they already have wineries.

Such laws “have created a lot of economic activity between distillers and local farmers,” said Andrew Faulkner, vice president of the American Distilling Institute, a trade association for craft distillers based in California.

Some distillers work with seed banks and universities to revive “heirloom grains” that had fallen into disuse, Faulkner said.

Local distilleries also create uses for farm products that would go to waste, like crushed fruit left over from wine-making, which Beardsley plans to gather from nearby farms to make grape, strawberry and blueberry brandy.

In Maryland, once famous for rye whiskey, rye is still planted by farmers to enrich the soil but the crop is usually burned because there’s little demand for it. Now some distillers are looking for Maryland rye again, Faulkner said.

In New York, farm distiller Ralph Erenzo said some whiskey ingredients are still scarce but demand is likely to bring them back.

Erenzo’s Tuthilltown Spirits had to buy malted barley from Canada to make a Scotch-style single malt whiskey, because it couldn’t find enough of the ingredient in New York.

“That will change as New York farmers start to grow barley again and malt houses are started [up] to process it,” Erenzo said. 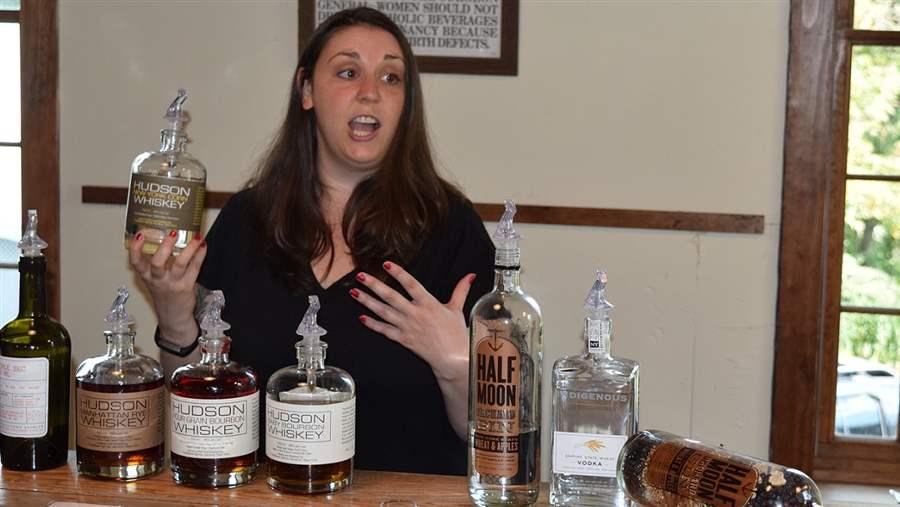 Erenzo’s distillery is a pioneer in farm distilling. It was the first in the state since Prohibition and among the first to take advantage of the 2008 farm distillery law, Erenzo said. Today New York has 117 farm distillers, State Liquor Authority spokesman William Crowley said.

New York’s farm distillery law has been amended since then to allow retail sales and, most recently, to allow the sale of mixed drinks as well as free samples in 2017, Crowley said.

“It was a big cash flow issue for them, so now they can serve drinks at a high profit margin,” Crowley said. “It was a big change.”

Faulkner, the American Distilling Institute vice president, said retail and cocktail sales are among the most pressing state policy issues for craft distillers, including those on farms. They can create substantial extra profits, especially if cocktails are allowed.

It’s not a cheap business to start: Beardsley thinks he’ll need at least $100,000 worth of equipment to start making brandy in New York.

Erenzo initially experimented with a tea kettle in his kitchen. But to make it as a commercial whiskey distiller he’ll need at least $500,000 in equipment to start and eventually as much as $5 million. One copper distiller vat alone cost him almost $500,000.

For Erenzo, starting a farm distillery in New York was a matter of near desperation after his plans for a rock climbing ranch in upstate Gardiner fell through when neighbors opposed it.

He considered a vineyard and a flour mill before discovering there were no distilleries left in New York and that state law allowed him to start a small one for a reasonable fee: $1,500 for three years as opposed to $65,000 for a full-scale distillery.

“We were off and running,” Erenzo said. The distiller now produces 80,000 gallons a year, and its Hudson brand whiskeys are distributed nationwide.

“The distilleries can be tourist attractions in themselves, like the farm wineries we’ve had for years. Not every farmer has the right soil to grow grapes or other fruit to make wine,” Perillo said. Farms that share produce for wine and spirits “is a great example of one farm benefiting another.”

Beardsley, the apple farmer, said he encouraged Perillo to sponsor a bill after he saw how well farm distillers were doing in New York. He plans to use his own apples, as well as grain and fruit from neighboring farms, to make brandy and other spirits.

Beardsley likes the idea of following in the footsteps of his great-grandfather, who made corn whiskey and cider brandy during Prohibition.

“I thought it would be nice to carry on that family tradition, but in a legal way,” he said.